Disregarded in the 20th-century, women, both queens and kings’ mistresses, left their mark in the heart of the château. Thanks to recent research, the château is shining a spotlight on them again in two exhibitions, marking the restoration of the Queen's apartments. 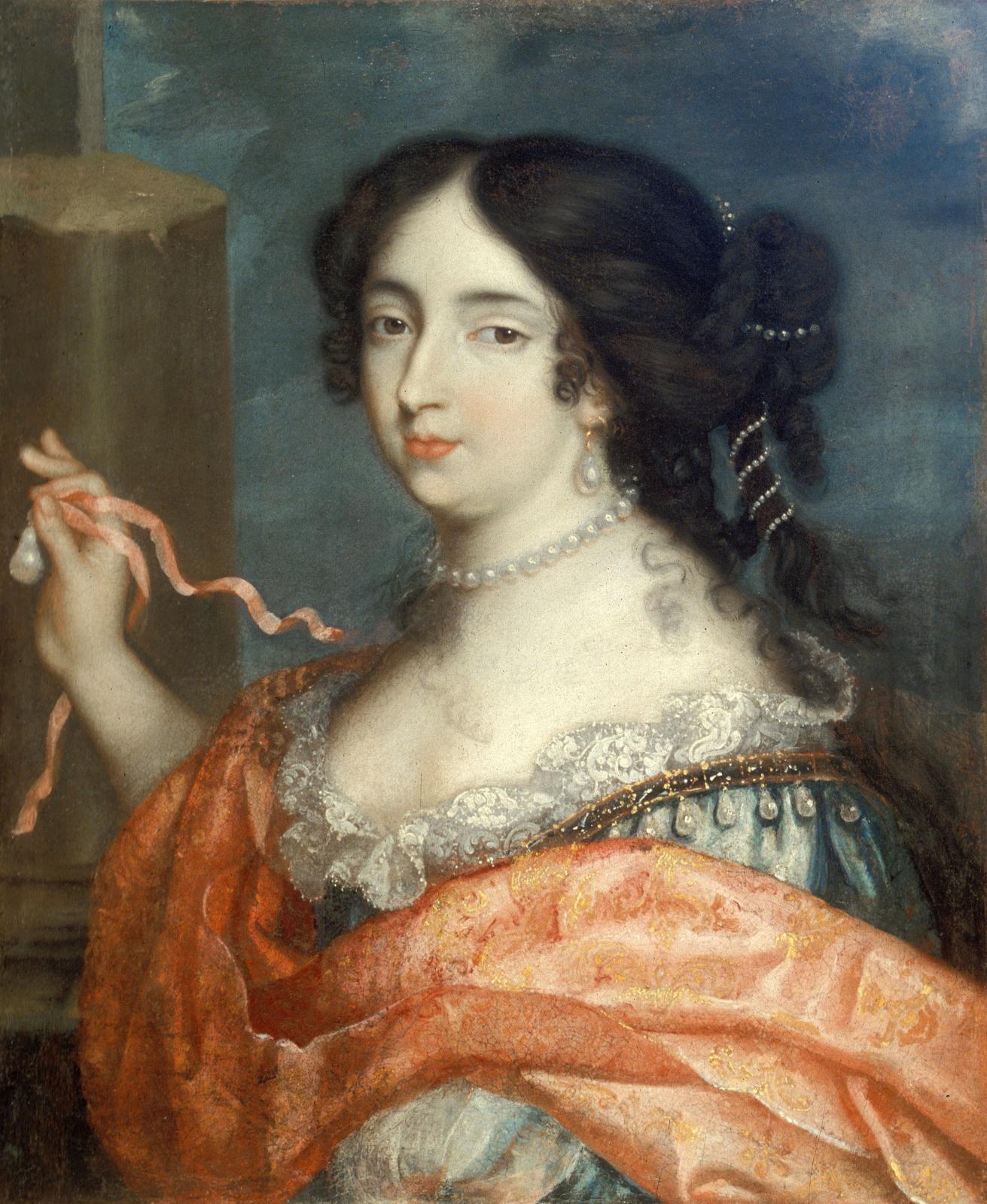 "For these crowds hungry for a legend, excited by novels and sometimes simply by history, Versailles is above all redolent of the women who lived there, who gave it charm and ever-fresh adornment. It is well-known that many of them held, in their light hands,  the slackened reins of power." This excerpt from the compendium on Les Femmes de Versailles (1901) by Pierre de Nolhac, then curator at the château, reveals the extent of the cultural gulf that had slowly widened. In historiography, within a century kings and their mistresses swapped the "slackened reins of power" for an image as ornaments of the court. Without presenting Versailles as a den of royal females, nevertheless, women were diverse and numerous to shape its image. Probably their loss of political power, with Anne of Austria's exclusion from the Council in 1661, until Marie Antoinette's return in 1788, contributed to blurring their true position.
The move of the court to Versailles in 1682 redefined the role of women, particularly in terms of the chateau layout. To do justice to this neglected side of its history, Versailles is staging three events happily unified by some fortuitous research. The harmony between the spotlight on Madame de Maintenon in her newly restored apartments, the presentation of the recently reunited collections of Marie Leszczyńska and the now-completed refurbishment of the Queen's apartments, which has revealed much along the way, discoveries, highlights a range of work on the role and place of women at Versailles.

The imprint of these ladies
Head curator of sculptures at the château, Alexandre Maral started the ball rolling with his publication Femmes de Versailles in 2016. Previously research was largely focused on the political influence of these women: the biographer Simone Bertière had published a series on the Queens of France from the Valois to the Bourbons between 1994 and 2002; in 2011, the historian Bernard Hours, in La France de Louis XV, had restored their political role to women in the governmental systems, preceded by Joël Félix, in 2006, with Louis XVI et Marie-Antoinette. Un couple en politique. Ten years later, Maral's research not only revived a taste for forgotten figures – like Louis XIV's daughter, the Princesse de Conti, and the Duchesse de La Vallière, the Sun King's mistress and a major patron of the artist Claude III Audran, Antoine Watteau's teacher – but also analysed the topography of the château as evidence of the importance given dauphines and favorites of among the kings.

.
On the strength of these discoveries, the restoration of the Queen's Great Apartment, recently completed after three years' work, has made it possible to bring Maria Theresa's imprint to light. "The most spectacular piece of restoration work is the Guard Room, which had been ignored for years. Apart from the doors (some of the few from period of Louis XIV to have survived), there was little trace of Maria Theresa of Spain. Few were interested in the taste of the woman who was above all the wife of Louis XIV. But the restoration work enables us to see precisely what each queen contributed to the interior design," says Laurent Salomé, director of the Musée National des Châteaux de Versailles et de Trianon. For example, the ceiling by Noël Coypel (1628-1707) can now be seen in a new light after the removal of repainted sections. In this confusion of embellishments and sovereigns, the ceiling in the Queen's bedroom features both Maria Theresa's boxed rocaille sections and François Boucher's paintings for Marie Leszczyńska. Restoration has also revealed that the carton-pierre moulding of Maria Theresa's chambers dating from the following reign. Meanwhile, Marie Antoinette's textiles have been rewoven according to the original cartoons, while the bed and balustrade have been re-carved, based on archive documents.

A Woman Far From Strict or Severe
Maria Theresa's death in 1683 paved the way to glory for another woman, Madame de Maintenon, who had been living a few steps from the King's Apartment for three years. "She was the only king’s mistress to live at the château – for thirty-two years, to boot. To enable this, the king gave her a specific role: second lady-in-waiting. Her apartment, which she found small, became a strategic place at the centre of power: the entire court passed by the staircase leading up to it to reach the King's apartment," says Mathieu Da Vinha, associate curator for Versailles's first exhibition on the "almost queen" (secretly married to Louis XIV in 1683) in her former apartments, restored for the occasion. The hangings have been rewoven according the original models, and various works have returned to their original positions, like Nicolas Poussin's Ravissement de Saint-Paul: commissioned by her first husband, the poet Paul Scarron, acquired by the Duke de Richelieu in 1665 and now in the Louvre.
The idea colouring the château's history of an austere, strict woman has now been dismantled and proof of her secret marriage are exhibited for the first time. At the heart of power, Madame de Maintenon set fashions trends for women of the court, initiated "apartment soirées" consisting of games and conversation and supported the theatre by opening the château to performances of Jean Racine's Esther and Athalie. This progress in research has given Laurent Salomé some ideas: "As well as her portrait and those of her entourage presented in the Louis XIV rooms, we will need to make a few acquisitions in the context of their reorganisation. We know of some paintings in private collections, and we have tabs on certain portraits of La Montespan!"

2018: an acquisitive year
Unable to preserve the different layouts over the years, the château has fallen back on a dynamic acquisition policy. In 2018, in addition to the return of the chest of drawers made in 1776 by cabinetmaker Jean-Henri Riesener for Louis XV's daughter Madame Adélaïde (1732-1800), the collections of Marie Leszczyńska (1703-1768) were enriched by some fine purchases. For example, in a dossier-exhibition on the taste of Louis XV's wife (on display in the Dauphine's apartments), there is a rocaille vase with a pink ribbon decoration from the early days of the Sèvres factory – a Christmas gift from Louis XV to the Queen – and the Chinese Cabinet, a group of nine panels partly painted by the Queen herself on advice from Jean-Baptiste Oudry, or possibly Jean-Marc Nattier or Noël Coypel. Illustrating the tea trade and culture, this "cabinet de fantaisie" will be reassembled next year in the current "supplément" (add-on room) to Marie Antoinette's library. "A maternal character, the wife of a liberated king, she seemed dutiful and even dull to some people, but we should remember her role as an interior designer: she was the one who initiated the transition to the pleasing, flowery rococo style, and developed a taste for comfortable, refined private apartments," says Laurent Salomé.
The Dauphine's apartment is to be refurnished; the Queen's small apartments will be opening to the public by the end of the year, while Marie Antoinette's apartments on the second floor also need refurbishing. Meanwhile, at the Queen's Hamlet, now that the house is once more as Marie Louise knew it, work on the Boudoir should be starting soon. Élisabeth Vigée Le Brun said in her Mémoires that "women used to reign, then, and the Revolution dethroned them". Perhaps, in the end, she will be refuted...

Make way for the Orléans!
Newsfeed
See all news
The Audemars Piguet Art Commission Is Over the Moon
Fanning the Flames? UNESCO Calls on France to Save Paris’ Fan Museum
Gagosian Appoints Critic Antwaun Sargent as Director and Curator
Art Basel's Flagship Fair Has Been Postponed. Again.
Not to be missed
Cultural Heritage
Père Lachaise: Birthplace of the Modern Resting Plac…
Père Lachaise Cemetery welcomes 3.5 million visitors each year to…
Cultural Heritage
The Château de la Mercerie, the “Versailles of Chare…
Seven years after reopening to the public, the Château de la Mercerie,…
Cultural Heritage
The Beinecke Rare Book and Manuscript Library, Yale’s…
Established in 1963, the Beinecke is one of the world’s largest…
Cultural Heritage
Eugène Lami: the First Modern Interior Designer
Magnificently restored, the Duc d'Aumale's apartment in Chantilly,…