Vera Molnar: Between Rigor and Transgression

The digital art pioneer celebrated her 95th birthday in January. Her preparations for two exhibitions for Zurich and the Centre Pompidou are in no way sapping her vitality. 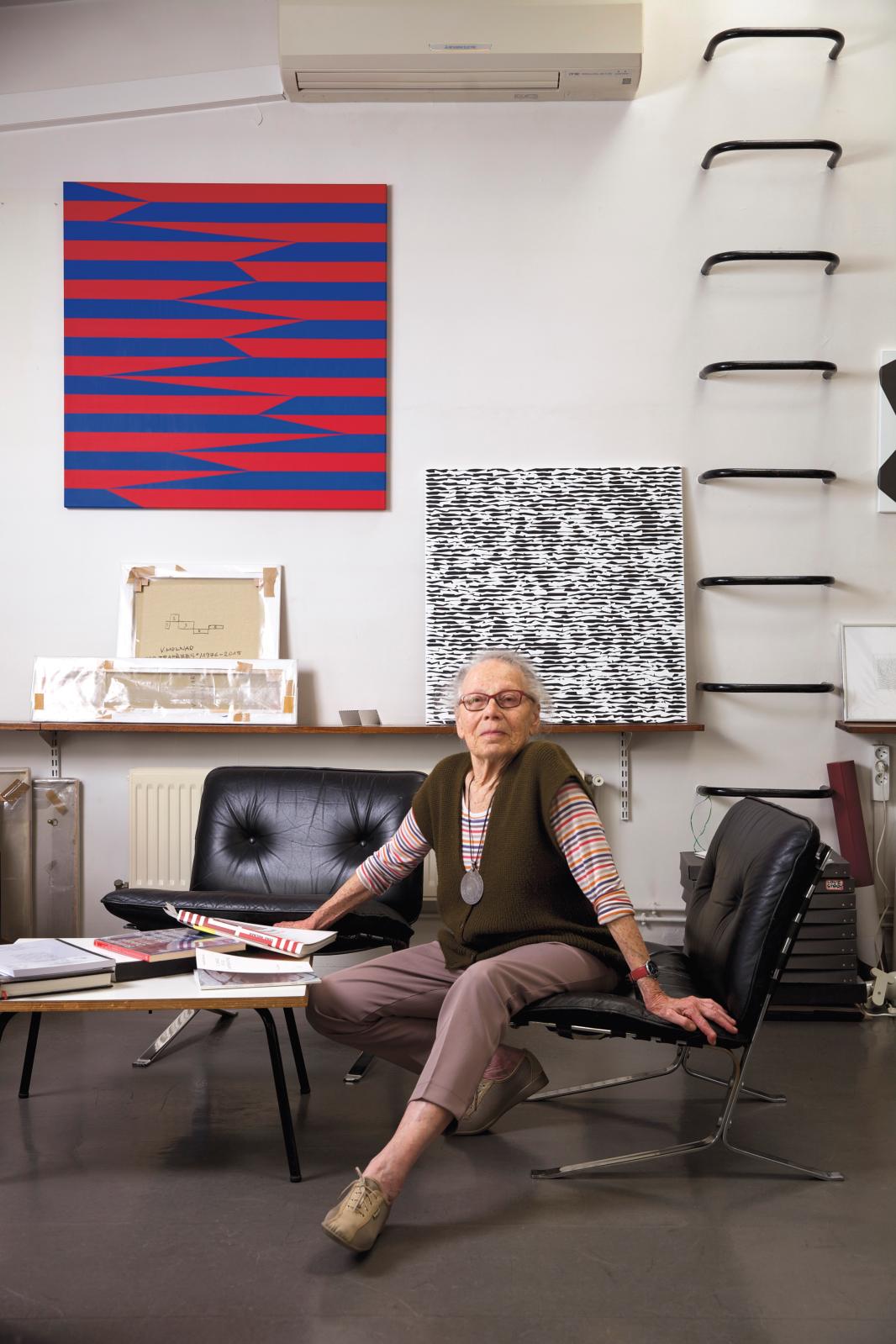 Since 1964, she has lived and worked in a house-studio she designed with her husband François, hidden at the back of a garden behind a building in Paris's 14th arrondissement, not far from Denfert-Rochereau. In Vera Molnar's home, there is no separation between art and life: "Art is an obsession; that's all I think about," she says. The living area is on the first floor, and the studio on the second. Furthermore, she started working with François Molnar, whom she met during her studies and with whom she married in 1948, one year after their arrival in Paris.. He preferred to devote himself to research by joining the CNRS (French National Centre for Scientific Research), after the failure of the GRAV (Groupe de recherche d'art visuel initially called CRAV, Centre de recherche d'art visuel), created in 1960 and dissolved in 1968. The disagreements within the group, founded in particular by Julio Le Parc and François Morellet, came from divergent points of view, François Molnar favoring a scientific approach and refusing to run "after art critics and galleries." Born in Budapest on January 5,1924, when she was only sixteen Vera Molnar decided to become an artist and live in Paris. "I first thought that Paris, France was the motherland of art, and I read somewhere, or someone told me, about the beautiful idea of the French Republic – not France: the Republic, I wanted to live in the French Republic," she said in an interview. Now at 95 years and 4 months old (she counts them) she has never worked so much in her life. "In the morning I wake up, I make tea and I start to draw. In the end, that's what I like best: to see a pencil skimming over the paper, and trace it, stopping from time to time and erasing. There is something magical in this relationship – to give free rein to the first ideas that come to mind, and know that this is not necessarily the final form. I love the pencil. You can make it disappear, unlike with painting." In her studio there is a table in the big picture window where Molnar works, and alongside it a wall hung with pictures. She is highly rigorous and demanding with herself: it is inconceivable for her to spend a day without working. In fact, she has adopted Pliny the Elder's maxim: "Not a day without a line." She never stops exploring or trying out materials and techniques. Vincent Baby, a PhD in art history and a specialist in the artist, remembers: "She had a 4-colour Bic in her box on her desk for a long time and she didn't know what to do with it. One day, she took it and used it to draw. She really liked the changing colors of the line."

An obsession with lines
But Vera Molnar does not restrict herself to a single location, and always travels with a pocket studio – "a survival kit" – with pencils, erasers, felt-tip pens and a small sketchbook, so she can capture every single idea. She had a house on the Normandy coast, where she had a huge drawing table: the beach, which she transformed with the razor shells left behind by the tide. Here "there was no need for an eraser: the good Lord came by twice a day and swept the beach clean," she says, laughing. A film by her Hungarian compatriot Laszlo Horvath has preserved the memory of this game, played a long way from home, "so that no-one could see me." While her work is not defined by the medium she uses – drawing, gouache, acrylic, tracing paper, torn paper or, since 1968, the computer and 3D installations –, her obsession with lines is a fundamental aspect of her art.

Bending the rules
Although she received classical art training at the Budapest School of Fine Arts from 1942 to 1947, Molnar remains fascinated by art based on mathematics and geometry. Vincent Baby writes: "This preoccupation with an art that allows "direct" communication, without recourse to literature, is a powerful leitmotif of Vera Molnar's approach, and the arguments of Max Bill (painter, architect, sculptor, Swiss designer) which explain the role mathematics can play in it have strengthened, for her, the idea of an art that is measurable, quantifiable, controllable.” But the artist needed to circumvent the rules she set herself; to transgress, chiefly so as not to be confined to a box; to be free. She introduced her famous "1% of chaos" that enabled her to create subtle variations in geometry, which could be excessively strict. Between 1960 and 1968, she tried to apply a program with her "imaginary machine," then with the computer she discovered in 1968 in the Bull laboratories in Paris, and later at the IT centre of Paris-Sorbonne University in Orsay. "You can't imagine how exciting it was to see what exists naturally in your brain appear on the screen for the first time!" Technology developed, obviously, and though Molnar put technical non-control of the code to good use, she now works with assistants, because her sight is not what it once was. "I make sketches and they create the geometric sections. Paradoxically, it's better; it's closer to what I imagine. When I was working on my own, there were problems I didn't know how to solve; it was always trial and error." In her endless quest, she uses a fundamental tool: her diary. Or more precisely, her twenty-one diaries… But make no mistake you will not find any insights into the secrets of her personal life or her feelings. We enter into the intimacy of the creative process and she records all her ideas there. As her gallerist Odile Aittouarès explains, "At Vera's, history is not chronological, it goes from one leap to the next, towards the past and towards the future. For years, her notebooks have allowed her to memorize ideas that, for some, may never see the light of day. From time to time, there are several dates on a work, when the idea appears for the first time, then when the work is finally created." This tranquil studio is still a setting for numerous future projects, like the set of plates designed with the publisher Bernard Chauveau. She likes to do away with the mystique of art, as with an installation at the Centre Pompidou or, this summer, an exhibition in Zurich's Museum of Digital Art. She will then be 95 years and 7 months old.

Vera Molnar: Fearless
Not to be missed
Artist Studio