While all that glitters is not gold, vermeil is probably the material that creates the most convincing illusion. Now inseparable from decorative tableware, silver-gilt was also one of the most precious materials used in religious and secular gold-and silverwork. 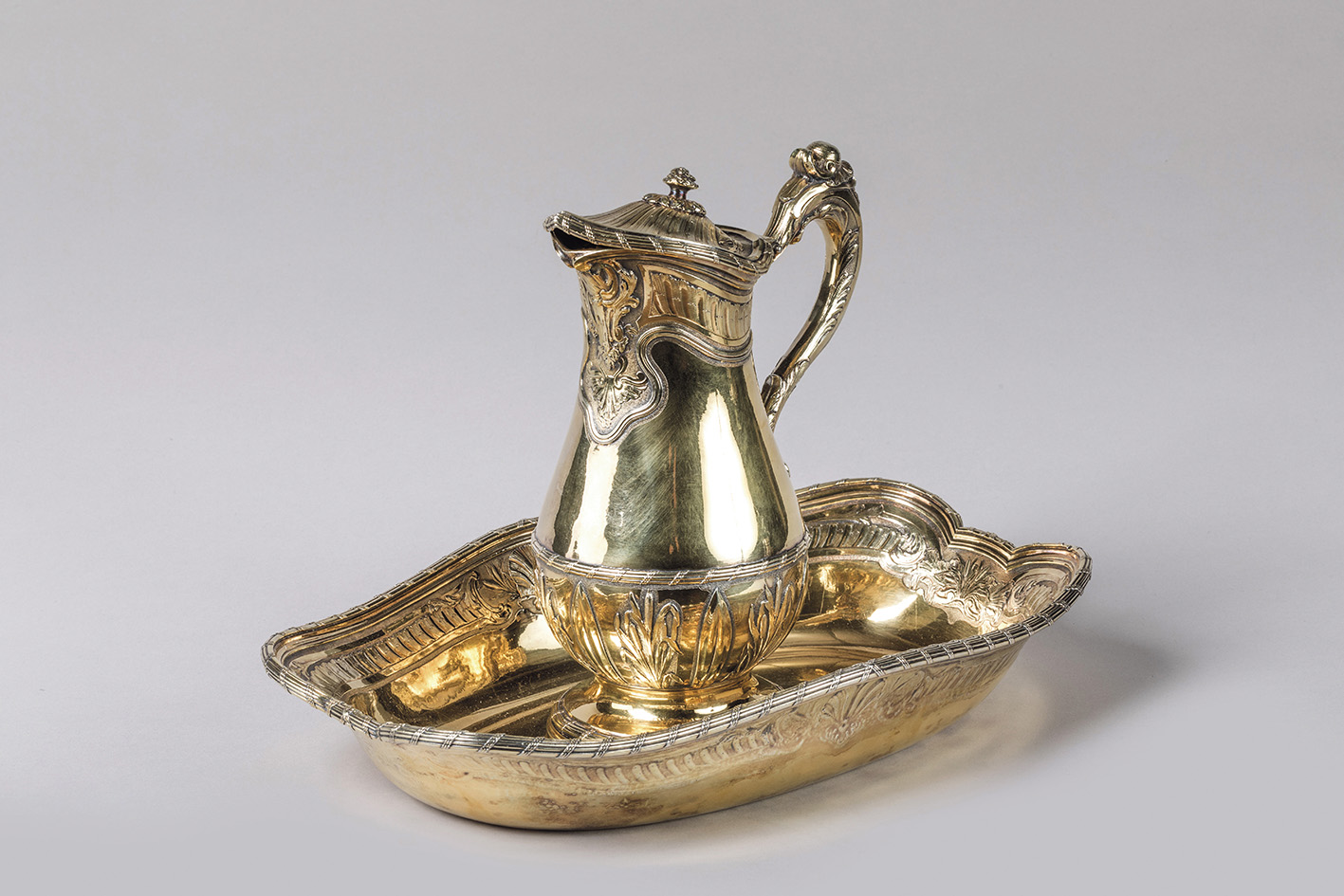 In the Middle Ages, a bright, orangey vermilion pigment gave the name "vermeil" to silverwork largely made of gilt copper, a glowing metal with red highlights evoking the explorations of medieval alchemy. In the 14th century, observing that metal heated to a high degree took on an incandescent vermilion shade, alchemists believed that it concealed the Philosopher's Stone within it. It took until the 17th century when this discouraging quest had yielded no results, for the term 'vermeil tox' be used exclusively for silver-gilt.
Known since antiquity, the techniques used for this type of goldsmith work were beating and a mercury amalgam, criticized by goldsmiths from the Renaissance onwards as a dangerous chemistry practice. It was obtained by mixing powdered gold with mercury in a crucible and heating it to 200°C (392°F). The goldsmith removed some of this amalgam with a brush and applied it to the silver object. The metal was then heated to remove the mercury. This evaporated in the form of toxic fumes, leaving a matt golden surface, which was burnished to a shine with hematite (an iron oxide). This technique made it possible, at a low cost, to enhance luxury medieval objects with the brilliance of gold, which naturally made vermeil a precious metal. Ceremonial pieces like basins, ewers and tall cups, displayed on sideboards and not intended for use, became impressively large.
The most remarkable masterpieces made in vermeil were nefs (ship-shaped table ornaments) and automatons, halfway between ceremonial objects and curiosities: for during the Middle Ages and the Renaissance, vermeil was used to adorn "wonders", whether artistic, technical or natural. In particular, the goldsmiths of Nuremberg and Augsburg excelled in exquisite, spectacular masterpieces produced to embellish 16th-century kunstkammers (cabinet of curiosity), like a striking Daphne by goldsmith Wenzel Jamnitzer (1507-1585), which combined vermeil and coral to illustrate the nymph's metamorphosis. So even before becoming a regular feature on princely tables, vermeil was used to ornament extraordinary curiosities.

Vermeil: an Essential Table Ornament
As well as ceremonial pieces, goblets and travel kits in silver gilt became popular, and Strasbourg became famous for its outstanding products in this sphere during the 17th century. At that point, the former "imperial free city", which became French again in 1681, was a "royal free city", with a privilege that made its fortune: goldsmiths were allowed to work silver with a lower silver content than in Paris, meaning that they could fix superior quality gilding onto white metal. The result was Strasbourg's spectacular rise as the capital of vermeil: a position it held until the early 19th century. In France, Germany and eventually the whole of 18th-century Europe, Strasbourg vermeil was considered the finest and most resistant. Outstanding dynasties of goldsmiths included the Imlins, Kirsteins, Alberti and Oertels.
Although these masters of vermeil strove to make the ceremonial pieces whose forms are inherited from the Middle Ages, the winged bowl became emblematic of their production. Often decorated, it was adapted to changes in taste, from Berain-style (French artist Jean Berain 1640-1711) decorations to rococo flights of fancy. In the 17th century, dining and dressing tables alike sported showy vermeil, and the fashion continued into the 18th century when it took on more modern forms like small utensils and travel, toiletry, chocolate, tea and coffee sets. This profusion of gilt extended to cutlery, too, but vermeil with its fragile gold covering was only used for dessert and entremets services. Unfortunately, the silver-gilt refinements of the Ancien Regime were subjected to mass meltdowns ordered by Louis XIV and suffered from the French Revolution's destructive forces. Only a few pieces of French vermeil remain extant.
However, vermeil underwent a revival at the dawn of the First Empire in France, regaining its splendor on Napoleon's table. Silversmith Henri Auguste (1759-1816) created the aptly named Grand Vermeil service consisting of 1,069 pieces, of which only 24 have survived, including the Emperor's nef. Although more unobtrusive during the 19th century, vermeil nonetheless gave brilliance to the liturgical objects that had been sorely lacking in churches since the Revolution. In fact, these items with their eclectic decoration were a recurring gift from Napoleon III to the cities he visited after his son was healed in 1858.
Little by little, mercury gilding was abandoned in favor of electrolysis, which involves immersing a silver object wired as a cathode in an electrolytic solution, with a gold bar used as an anode. The electric current activates a chemical reaction that transfers the gold to the silver. Later, Art Deco's silver—and goldwork with its powerful lines was tempered by vermeil in mellow rather than brilliant shades, found in a wide range of yellow, white, rose and gray gold tones. Composed mainly of silver, objects in vermeil carried the hallmarks of this metal, with a purity degree of at least 800/1,000 and a 5-micron gold coating. And though it had to be marked with the letter V in a rhombus, it was exempted from the State stamp below a weight of 30 g. Vermeil is gradually making a comeback today in bold modern jewelry. It is also the gold used for official decorations and Olympic medals, and still appears on the most luxurious tables.

WORTH SEEING
The Renaissance collection of the Musée d’Écouen, the toiletry set of Charlotte-Aglaé d’Orléans, Duchess of Modena, at the Musée du Louvre, and Jean Puiforcat's soup tureen at the Centre Pompidou.

C is for Coral
Not to be missed
Glossary