Every year the gardens of Bagatelle, in Paris, attract rose gardeners from around the world to judge the beauty of the queen of flowers. The roses are just one of the attractions on this 59-acre historic site where one of the most famous rose queens, Marie-Antoinette, indirectly contributed to the creation of the gardens. 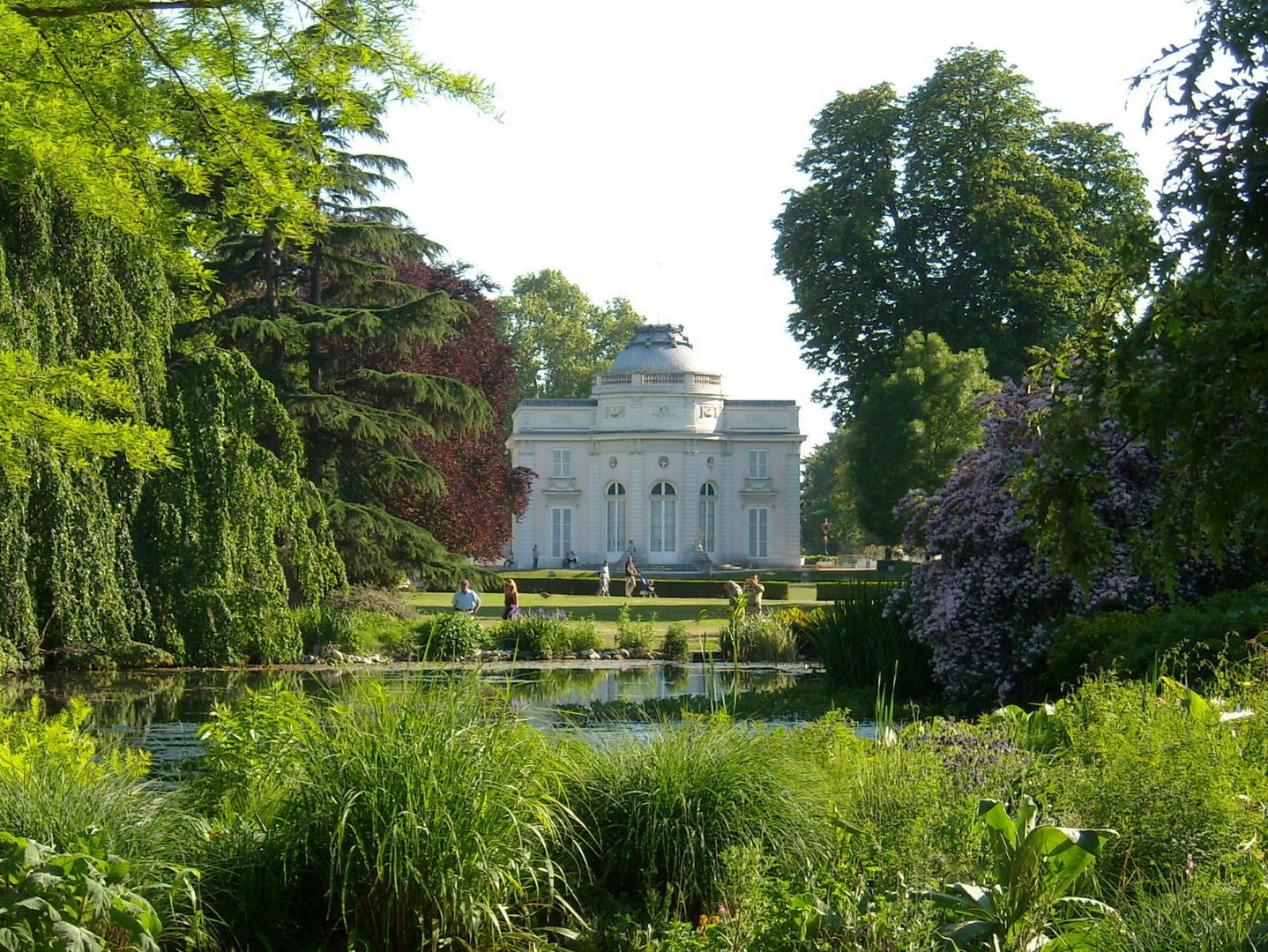 One century after its construction, an English collector, the Marquis of Hertford, enchanted by the house, named Bagatelle, purchased it. Hertford amassed an exceptional collection of artworks and decorative objects including works by Rubens, Titian, Fragonard, Rembrandt, Jean-Henri Riesener and porcelain from the Sèvres Manufacture, now housed at the Wallace Collection in London.

In October 1777, Queen Marie-Antoinette, an avid gambler, accepted a wager proffered by her brother-in-law, the Count of Artois at Bagatelle.  Artois wagered that he could build a pleasure pavilion surrounded by a garden that would surpass the beauty of the queen’s gardens and pavilion at the Petit Trianon, at Versailles, in less than three months’ time. Overseen by architect François Belanger (1744-1818), Artois hired over 900 masons, builders, and gardeners who worked night and day to meet the tight deadline. Artois won the bet, entertained the queen, and continued to decorate his ‘bagatelle’ (little jewel) for the next three years.

The elegant building was conceived as a pleasure pavilion. The entrance façade was neoclassical, a singular doorway marked by Doric columns. A frieze above the door announced its function: ‘Little but Functional.’ One entered a spacious and sparsely decorated vestibule with fake marble columns and encountered an elegant stairway that led to the private bedrooms on the first floor. To the left of the vestibule was a dining room, to the right a billiard room. Visitors passed these rooms that led to a central domed salon, designed for music or gambling parties. Two small boudoirs were cleverly inserted on either side of the salon for more intimate meetings. The circular salon created a convex shape on the garden façade. Large windows and doors provided direct access to the gardens

Belanger hired his brother-in-law, Jean Démosthène Dugourc (1749-1825) to decorate the interiors with playful grotesque and arabesque motifs: gilding was applied to stucco reliefs against a pale pink background. These decorative panels were placed in-between windows and doors. One of the boudoirs served as a bathing room and was decorated with six landscape paintings by French painter Hubert Robert (1733-1808) now housed at the Metropolitan Museum in New York.

Scottish gardener Thomas Blaikie (1750-1838) was hired to create one of the most beautiful and fashionable English gardens of the era. From the pavilion windows, visitors could glimpse a grassy lawn planted with clumps of trees appreciated for their color and textures Blaikie grew trees in nurseries especially designed for the gardens, many of whose varieties, including cedars, sequoias, and magnolias ornament the park, which is one of the four botanical gardens in the City of Paris today.  Blaikie and Belanger designed water paths and an impressive cascade. A recently restored Chinese “folly”, a small non-functional building that was designed to enhance the views suggests that the Count of Artois followed the trending taste known as chinoiserie, the imitation of Chinese motifs on western architecture and decorative arts.

Confiscated during the Revolution, Bagatelle was later reclaimed by Artois when he was crowned King Charles X in 1824. Lord Richard Seymour-Conway, 4th Marquis Hertford (1800-1870) bought the estate in 1835. For the next thirty years, he collected exceptional French 18th-century art including a commode by Jean-Henri Riesener and Jean Honoré Fragonard’s famous painting The Swing, which captures the sensuous pleasures of the rococo period.  Upon his death in 1870 his illegitimate son, Sir Richard Wallace inherited the property and his father’s collections along with a rather colossal fortune.

Sir Richard Wallace is considered a generous benefactor of Paris and London: Wallace supported the Parisians materially during the siege of Paris in 1870 and is best known for financing all the drinking fountains in the city, which still bear his name. Wallace died in 1890, he stipulated in his will that Lady Wallace bequeath his collections to the English nation.

Lady Wallace maintained Bagatelle until her death in 1897. She left the furnished pavilions to her secretary Sir John Murray Scott (1847-1912) who sold the property to the City of Paris, which acquired the gardens, pavilion and an annex Wallace built for the collections that he called Trianon and an orangery.

The City of Paris opened the garden to the public and hired one of the most important 20th-century landscape architects, Jean Claude Nicolas Forestier (1860-1930) to restore the park. Forestier trained with Adolphe Alphand, who was Baron Haussman’s leading city planner, and wrote a treatise on city planning the Grandes villes et systèmes de parcs in 1908 (Great Cities and Park Systems). Forestier expanded the English, or romantic, style at Bagatelle and created a rose garden in 1907, one of the first and oldest in France, which now comprises almost 10,000 roses of 1,100 varieties. Forestier also created an enclosed garden in the then-fashionable Hispanic-Morrish style for the display of irises that bloom from mid-May to June. The World Federation of Rose Societies holds an annual competition to assess new roses annually in June at Bagatelle.

Drawings from the Ulmann Collection

The Basilica of La Daurade: Jewel of Toulouse
Not to be missed
Cultural Heritage