Tutti Frutti: One of the Treasures of a Dazzling Jewelry Collection

This mix-and-match botanic style originated in India and will long be part of the jeweler's chronicle, before entering the museum world through the front door. 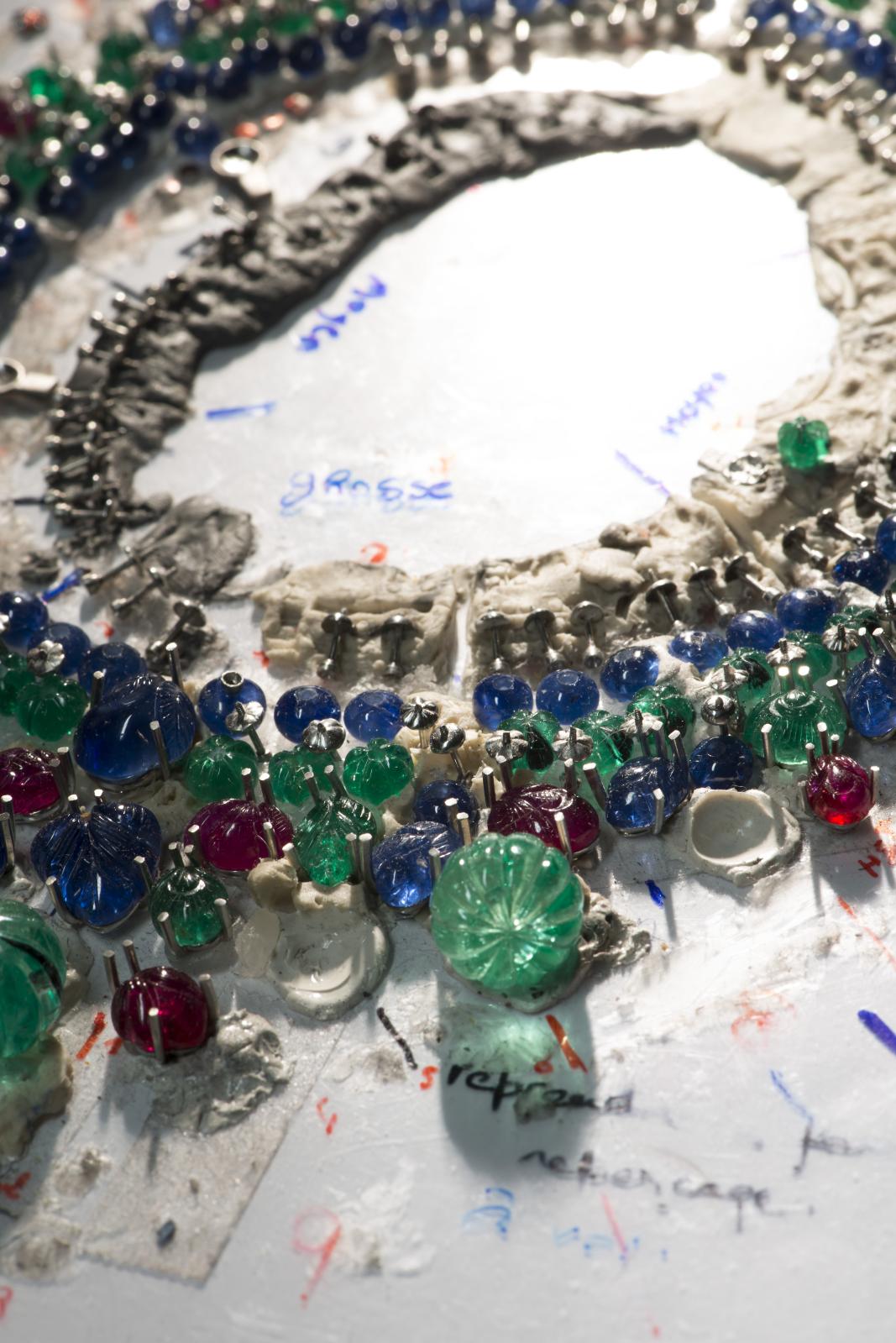 One day at the Hôtel Drouot (2004), an unassuming rock crystal bowl of fruit set with diamonds, rubies, sapphires, emeralds and amethysts, dating from 1910-1915, was knocked down for €12,200. Fresh, colorful and vibrant, it foreshadows the tropical wave that was to be the heyday of jewelry from the 1925s onwards. This exotic wave would be later nicknamed "tutti frutti." Omnipresent in the early part of the 20th century, white-dominated Art Deco with its ultra-radical graphics certainly needed a break. This technicolor exit from the motorway began with a small brigade of jewelers: Arnold Ostertag, Louis Boucheron, Henri Picq and Jacques Cartier. Sporting white linen suits and boaters, they most frequently set out for India from Marseille. These chic dandies trained in gemmology headed for the trading posts of Bombay, Calcutta and New Delhi, where, sitting cross-legged, they bargained for precious stones from the ancient treasure troves of the Mohghols: the imperial dynasty who ruled over northern India until the 18th century. Great lovers of ornaments and precious stones, the Moghuls depended at the time on the incredible savoir-faire of Indian artists, the only ones who knew how to cut emeralds, sapphires and rubies in relief and engrave them in hollow in the imperial workshops of Rajasthan.

Marvellous Extravagance
If the emerald was top of the hit parade at that period, it was because the Moghols believed it stood for eternity, as well as admiring its color, symbolic of Islam. Sacred stones? Philosopher's stones? Perhaps a little of both. Marvellously extravagant, these imperfect stones truly took the fancy of Parisian jewellers. Poles apart from classic facetted gems, they dazzled not so much for their carats as for their poetry and unusual cuts – melon-shaped, flattened at each end; cabochon; briolette; smooth or ribbed spheres.

A Jewelry Dessert Between Funk and Folk
In Paris, London and New York alike, the aesthetic recipe certainly made a splash: an irresistible cocktail of rubies, sapphires and emeralds sprinkled with diamonds; bracelets, necklaces and brooches literally overflowing with berries, flowers and fruit-laden branches; the lavish profusion of bejeweled jardinières set in platinum. Barbaric jewelry to some, Christmas trees to others – the press was divided. The eternal opposition between classic and modern was crystallized by the 1925 International Exhibition of Modern Decorative and Industrial Arts held in Paris where Cartier created a sensation at the "Elegance" pavilion with its Indian bracelets in alarming color combinations!

High-Flying Trend-Setters
Two women trumpeted the trend. The first was the ravishing Vicereine of India, Lady Mountbatten (1901-1960). In October 1928, Lady Mountbatten considered one of the world's six best-dressed women paid £900 for a versatile piece of jewelry made in Cartier's London workshop: a headband that could be separated into two bracelets. One day a tiara, the next an arm decoration, it was a bouquet of emeralds, rubies and sapphires engraved with leaves and fruit. The second woman, a Parisian with a crowd of admiring followers, was the daughter of Duc Decazes and Isabelle Singer (the illustrious sewing-machine manufacturer's heiress): Daisy Fellowes. This trailblazer of style, who "adooored" engraved stones, had an astounding necklace made by Cartier in 1936. Her appearance at the ball of the century (hosted in 1951 by Charles de Beistegui in Venice's Palazzo Labia), as an African Queen decked out in tutti-frutti pectoral splendor, bewitched the celebrity world.

The Beat of a Name that Sings
Indian style jewelry? Fruit salad? What should it be called? In the 1960s, the rock’n’roll tidal wave set off by the singer Little Richard with "Tutti Frutti" rang a bell with Cartier, which then baptized its collections as such. As the undisputed leader in the field, the jeweler raised this delightful style to the peak of art form that is more Parisian than exotic. Ever fresh, tutti frutti pieces are still sought after for contemporary collections. In 2008, Lady Mountbatten's headband joined William and Judith Bollinger's collection in the jewelry gallery of the Victoria and Albert Museum, between Joséphine de Beauharnais's emeralds and Catherine the Great's diamonds.

Worth knowing
Daisy Fellowes' "Tutti Frutti" necklace belongs to the Cartier collection, started in 1973 with the purchase of a mysterious clock.

Cartier Explores the Art of Islam and Beyond
Newsfeed
See all news
France: Marie Antoinette’s ‘Trianon Guitar,’ Is Heading to Auction
New York: Amtrak Enlists Derrick Adams to Create Artwork for Penn Station
Julian Charriere Wins the 14th SAM Prize for Contemporary Art
Exhibition: Sarah Bernhardt at the Petit Palais in 2023
Not to be missed
Analyses