Transformation of the Pernod Ricard Foundation for Contemporary Art: Season 2

After 20 years near the Place de la Concorde in Paris, the Pernod Ricard Foundation, a pioneer in contemporary art sponsorship in France, is moving to the neighborhood of the Saint-Lazare train station to start a new chapter in its history. 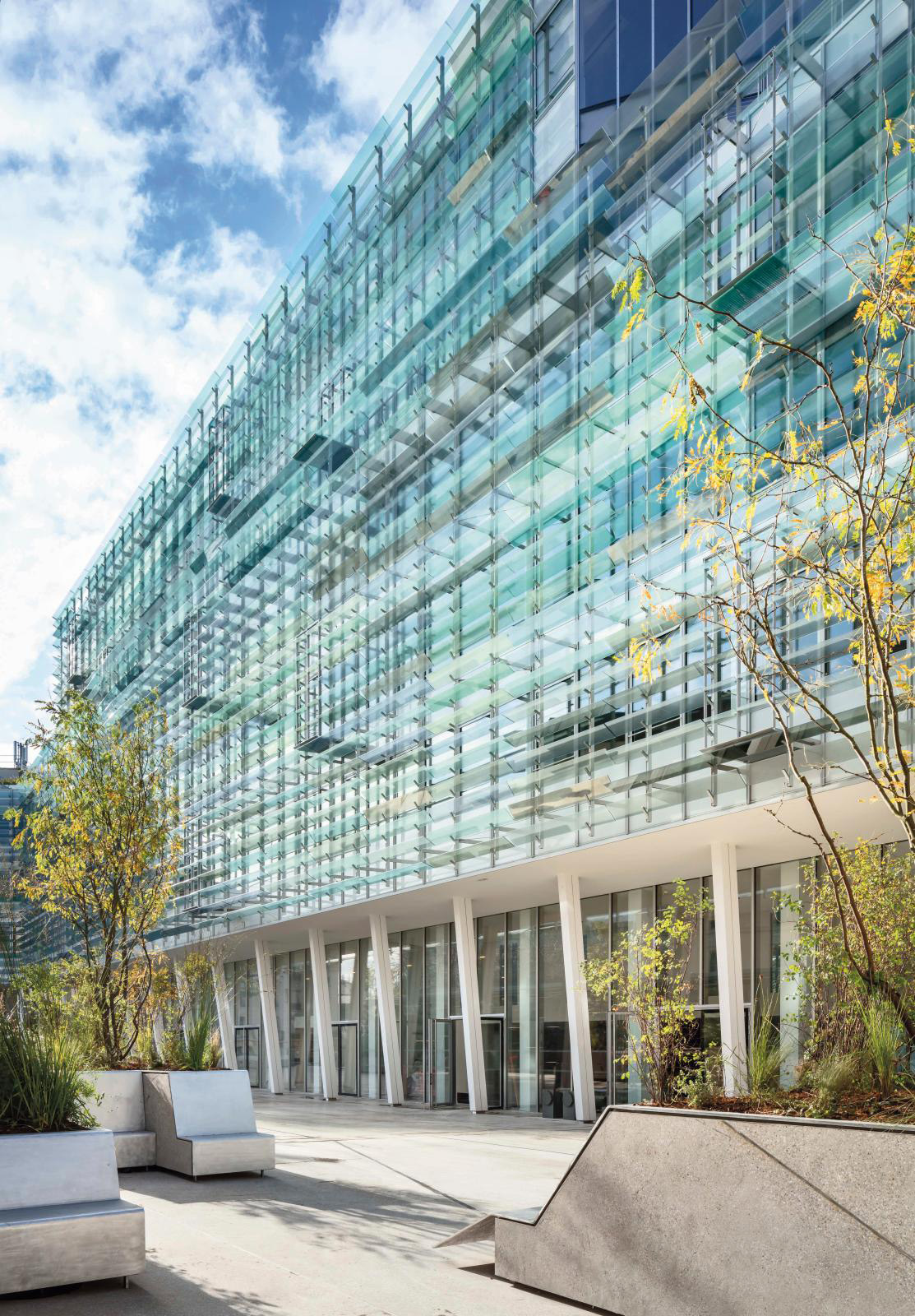 The new headquarters of the Pernod Ricard Group in the Saint-Lazare district, Paris.
© Photo Luc Boegly

The new headquarters of the Pernod Ricard Group in the Saint-Lazare district, Paris.
© Photo Luc Boegly

Since its creation in 1998, it has presented over 1,000 artists in 150 exhibitions overseen by 250 curators, and earned a stellar reputation for its support of the young French art scene under the keen guidance of Colette Barbier. Today, the Pernod Ricard Foundation begins a new chapter in its history as it moves into a brand new space on the first floor of the building created by its patron, the Pernod Ricard Group, to house its world headquarters. Designed by Jacques Ferrier, this elegant building sports a façade of tinted glass strips. It backs onto the Saint-Lazare train station (8th arrondissement) and opens onto a pedestrian esplanade, which will be home to a café terrace, as well as sculptures and performances from time to time during the summer.

"We had been wanting to move for two years," says Colette Barbier. "Although we loved the space in Rue Boissy-d'Anglas, it had become too restrictive and its location on the upper floor made it difficult to handle the artworks. We were looking for a place in a livelier neighborhood more immediately connected to the city." Then came an opportunity to join the group's headquarters: an idea suggested by Alexandre Ricard, its CEO. "He was very keen for the foundation, which he chairs, to be part of the new headquarters. It was a way to reassert his commitment," says the director. "Knowing how deeply our programming interests our public, he believed this unification would also benefit the 900 employees now grouped together at the site." It was also, for him, a way of emphasizing that art is part of the company's DNA, as well. His grandfather Paul Ricard, inventor of the famous aniseed-flavored alcoholic drink so characteristic of the South of France, had studied at the fine arts school in Marseille and wanted to be a painter. Although he had to join the family wine business at his father's behest, he remained close to artists. Though not a collector, he became a patron, and in 1950 even bought Bendor Island off the Var coast and turned it into a sort of mini Villa Medici. He also painted in his spare time.

New Premises; New Prospects
Today, for the occasion, the Ricard Foundation has been renamed the "Pernod Ricard Corporate Foundation," which is notable. Until now, the foundation was attached to the company's French branch that was behind its creation, but it is now overseen by the global group. This means that via its 86 subsidiaries, the foundation will be able to boost its strike force and champion the young French art scene more effectively on an international scale, gaining both logistical and financial support on-site. "Actually, we were already organizing exhibitions abroad, in Korea, Bulgaria and Mexico," says Colette Barbier, "but this unification should enable us to expand even further." Especially as this prospect reflects her own philosophy. As she says, "Right at the beginning, we were constantly concerned about what artists need. Now the landscape has changed. When we started out, they were short of venues to show their work. Today, we need to help them create, assisting them beyond our borders so that they can gain visibility."

A Sense of Community
The foundation thus maintains its mission and its free access: "a distinctive feature", as its director stresses. However, its dimension is changing. "When we decided to leave, we thought about the tools we could use to further our mission while preserving the friendly, open spirit we value so much." The new premises, designed by the NeM agency, obviously include an exhibition space, which measures 300 m2 or 3229 ft2 ​​​​​. It overlooks the esplanade and, in the back, has an unexpected view of the station with all the trains coming and going, which can be "inspiring". It can be adapted to accommodate all forms of expression, whether paintings, sculptures, installations or videos. As the foundation does not have its own collection, guest artists will always be central to its activities. There will be four solo or group exhibitions each year, which will function in just the same way. "I never build a program on my own," says Colette Barbier. "I rely on outside curators, who can also submit projects to me, and I sometimes call on artists to play this role." This is true of the opening exhibition, entitled "Le juste prix" ("The Right Price") and curated by Bertrand Dezoteux: a visual artist shown previously in Rue Boissy-d'Anglas, whose career the foundation has continued to follow.

A Prize Reviewed and Updated
As you walk through the foundation in the Saint-Lazare neighborhood, you discover the "new tools" mentioned by its happy director. Inside, there is a library with a free-access viewing area and a bookstore, each focused on the French art scene, as well as a café-restaurant named "Le Mirette" (a nod to Paul Ricard's wife), which can host informal meetings. The hall along the esplanade will also be used from time to time for events and hangs. This leads to a state-of-the-art auditorium seating 112, where the "Conversations on art" will be held. Launched 20 years ago, this series also contributed to the foundation's reputation. "At the time, talks between an artist and an art historian were uncommon," says Colette Barbier, who is keen to develop debates, screenings and master classes alongside the exhibitions.

The move was also an opportunity to rethink the mechanism of the prize awarded each fall, during the FIAC. The first of its kind, also created 20 years ago, it has proved highly important, judging by the winners now firmly established on the international scene, like Natacha Lesueur, Tatiana Trouvé, Boris Achour and Loris Gréaud. However, ever-more numerous prizes of this kind have recently seen their legitimacy challenged, considered rightly or wrongly as marketing operations. "We listened to the message and decided to transform our own award by treating it as a long-term partnership," says the director. "It is true that giving artists a prize is not enough in itself to help them." The first edition of this revamped formula has swung into action. From now on, when visual artists are nominated by the guest curator, they are followed individually for a year. According to their needs, they can use the means at their disposal (from the website to the café), and are given carte blanche and production assistance, so that when the exhibition is staged next October, the jury will be able to "give an informed opinion on their work and vote in full understanding of the work," says Colette Barbier. The outcome remains the same. One of the winner's works will be purchased and then given to the Centre Pompidou, and the artist will receive assistance in producing a personal project abroad. In a context of crisis, the role of foundations like this has probably never been so crucial.

The Louvre and Cy Twombly: The Ceiling of Discord
Newsfeed
See all news
David Hockney’s Design for the London Subway Is Mocked Mercilessly Online
Mixed-Media Artist Robert Longo to be Represented by Pace Gallery after Metro Pictures Closure
Submissions Open at ETH Zurich for Scholarly and Experimental Articles
Latinx Art Expert E. Carmen Ramos is Appointed National Gallery of Art’s Chief Curator
Not to be missed
Analyses
Surrealism’s Trailblazing Women
Their lives were bold and eventful, their travels extraordinary,…
Analyses
Is the Encyclopedic Museum Still Relevant?
In his new book, Donatien Grau, a French writer, art critic and…
Analyses
Napoleon's Impossible Palace
From the Tuileries to Versailles, Napoleon Bonaparte sought a palace…
Analyses
Ernst Haeckel, the Zoologist Who Inspired 20th-Century…
The 19th-century German scientist, who coined the word "ecology,"…