The combination of the extraordinary setting of the Boboli gardens and the monumental sculptures of Tony Cragg (b. 1949) works marvellously. 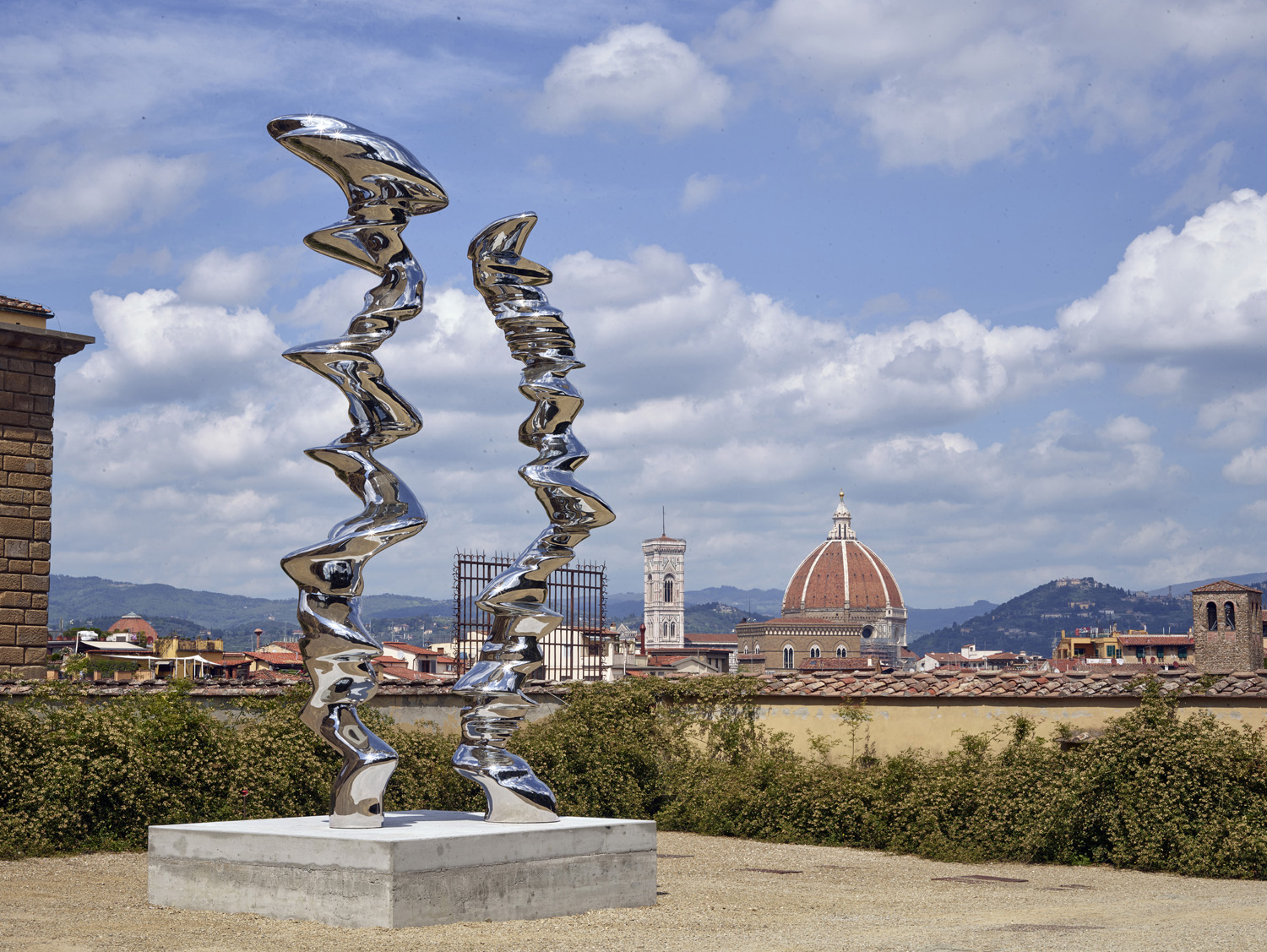 Firstly through their affinities: the Mannerist aesthetic of the park, teeming with oddities and secret spots intermingling with the plant life, chimes in beautifully with the artist's hybrid "deformities", which come from a world of astonishing half-natural, half-virtual proliferations. Conversely, we discover an evocative contrast between two periods, ours and the Medici's, though both are imbued with melancholic anxiety. Here Cragg's sculpture becomes classical, while Boboli seems fired by the topicality of the monumental pieces. The chrome-plated geyser standing out against the Florentine panorama with Brunelleschi's dome is a quasi-hallucination, especially as it is the only work set against such a broad backdrop. But the other pieces, in resin, plaster and bronze, sit well in the chiselled-out flowerbeds and alleys, and seem to summarise the British artist's output through a splendid range of his formal and existential obsessions. Cragg leans towards a form of monstrosity he obstinately endeavours to define, and which resonates speakingly with the Mannerist grottos and fountains. The sculptor seems to be waging a battle against giants, on a scale involving a cosmic space full of disconcertingly serial curves, numbers and rhythms and increasingly abstract imperatives in terms of carving and design. His pieces are always half-way between vegetable, mineral and digital; a mixture of worked forms and machined parts. This deliberate irresolution produces a pathos, one might even say a lyricism, skilfully set off by the massive, monumental aspect. "Cragg at Boboli" provides a wealth of intuitions and stimulating sensations.

Tetsumi Kudo: Portrait of the Artist in a Cage
Newsfeed
See all news
Louvre Museum Opens Le Studio in October, A Place Dedicated to Exchange
UNESCO Announced the Return of the Gilgamesh Tablet to Iraq This Thursday
"Œuvres Choisies" Exhibition Ushers In the New Auction Season at Drouot
RER C Train Will Transport You to the Paris City Museums
Not to be missed
Exhibitions
The Hôtel Drouot Reopens for the Season with the “Oeuvres…
The opening of the Drouot season is marked by "Oeuvres Choisies",…
Exhibitions
The New Woman Behind the Camera
Now at the Metropolitan Museum in New York and then on to the National…
Exhibitions
Gardens at Giverny, from Monet to Bonnard
Composed, like a huge bouquet of about a hundred paintings, drawings,…
Exhibitions
The Giacomettis, a Family of Creators
We all know that Alberto Giacometti was talented, but what do we…