A finalist for the Marcel Duchamp Prize in 2018, multi-media artist Thu-Van Tran was invited to spend the two years at Sèvres–Manufacture et Musée nationaux. In collaboration with the Manufacture’s artisans, she has produced a body of work that harnesses porcelain’s evocative beauty. 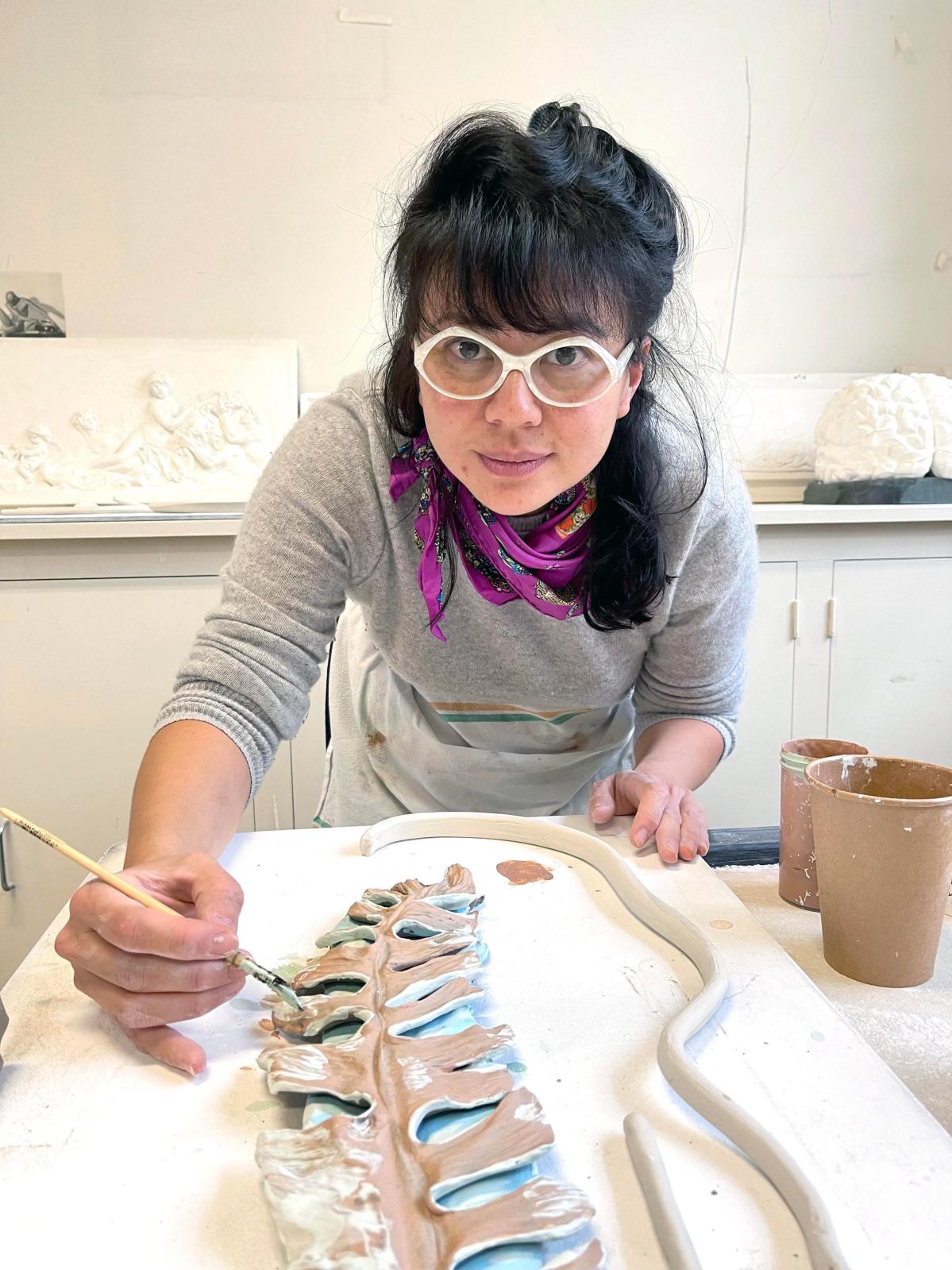 Thu-Van Tran’s workroom at the Sèvres Manufacture is filled with haunting and beautiful objects that she describes as “an ecosystem, in which I can investigate myself as a person and as an artist.” Here, fragile sandstone leaves are scattered next to molded porcelain rocks incrusted with the carvings of birds’ wings and a model of a volcanic eruption. These works were produced during a two-year invitation at Sèvres–Manufacture et Musée nationaux. Established in 2019 in partnership with the Association for the International Diffusion of French Art (ADIAF), the invitation allows a finalist of the prestigious Marcel Duchamp Prize the opportunity to collaborate on a body of work that draws upon the unique expertise and technical know-how of the Manufacture’s artisans.

For her invitation, Thu-Van concentrated on what she defines as three realms: the natural or organic, the fossilized or mineral, and the celestial. Nature finds its way into Thu-Van’s workroom in the form of sandstone tree leaves painted with barbotine to highlight their intricate texture. Cast from rubber tree leaves, they function as a reference to the colonial history of the artist’s native Vietnam. Brought to East Asia from South America by European colonizers, rubber trees were grown on plantations maintained by the violent exploitation of human and natural resources. Those conditions rendered the same plantations sites of resistance where workers embraced and cultivated an anti-capitalist and anti-colonial discourse. For Thu-Van, these histories of violence and resistance are still felt on the plantation today. “After traveling through rubber plantations,” she says “you can feel how your body has been changed, how you have been impacted physically by nature. It is a very particular environment, with intense humidity and smells that create difficult working conditions. Today, the laborers are still extracting rubber by hand, working primarily at night when the rubber flows best.” For Thu-Van, the fragile tree leaves become a way to reveal the past by creating a contemplative moment in which history is made present. The use of the molding process is integral. “When you open the mold, you reveal a thing, something that has been there, imprinted on contact. This to me means a lot in terms of truthfulness, a direct relationship to the matrix. I work with real tree leaves that I brought from Vietnam and that we molded here at the Manufacture. These leaves came from the actual matrix—the plantation.”

The idea of an imprint as a trace of the past brought into the present is also embodied in Thu-Van’s installation The Sky Genius, which consists of molded porcelain rocks that are incrusted with the carvings of bird wings. The work is a reference to an old Vietnamese legend of 100 rocks around Hanoi’s Hoan Kiem Lake that were turned into birds overnight by the genie of heavens to bring peaceful sleep to bereaved families. In The Sky Genius, the legend remembered by the artist from her childhood and travels to Vietnam, is made present through French sources and materials: the rocks are molded from stones used in the fabrication of porcelain, while the carved bird wings are those of species that live along the Seine basin. The wings are applied onto the porcelain rocks using different techniques—sometimes by cutting in, sometimes by modeling with porcelain on top of the molded object. For Thu-Van, the melding of the organic and the mineral is deeply symbolic: “I really like the feeling that we don’t know if the stone is becoming the bird, or if the bird died and left its traces on the stone, became fossilized in it—it is both about the past and the future, about becoming and having been.”

Thu-Van further explores the notion of a suspended instant in the sculptural rendering of the pyroclastic flow—a dense cloud of ash that accompanies a volcanic eruption. Rendered in white porcelain, the cloud is suspended in a moment that brims with both danger and beauty. The sculpture’s mushroom-like shape seems to radiate the explosive power of the eruption, while its intricately modeled forms and smooth surface seduce the viewer to get closer, to look and to touch.

Describing her invitation at Sèvres Thu-Van noted: “For me, it was an experience of real exchange and dialogue with the whole team, from the administration to the artisans in the studios. What I really appreciate is the different steps: you have the molding (le moulage) and the polishing (le polissage), among other steps. It is much more organized than the way I am used to work. But it is actually a good combination—the result is quite good.”

Sèvres Porcelain Makes a Splash at Empire-Themed Sale
Newsfeed
See all news
Barbados Announces Museum and Memorial to Victims of Slavery
English Teenager Finds Bronze Age Hoard with Metal Detector
Seattle to Open Museum Dedicated to NFTs
Afghan Artists Are Pleading for Help
Not to be missed
Artist Studio
Thu-Van Tran: Past and Present
A finalist for the Marcel Duchamp Prize in 2018, multi-media artist…
Artist Studio
Monique Frydman: A Pictorial Chronicle of a Moment…
Known for her numerous abstract paintings, this dedicated artist,…
Artist Studio
Daniel Dezeuze: Eternally Questioning Paintin…
In his studio in Sète the 79-year-old French artist, a founding…
Artist Studio
Tadashi Kawamata: A Work in Progress
With high-perched huts, nests, waves and desolate landscapes, his…