The origins of the Walters Art Museum date back to 1931, when Henry Walters bequeathed to the city of Baltimore an extensive art collection started by his father, William T. Walters. Today, the museum is reckoning with its founders’ white-supremacist legacy. 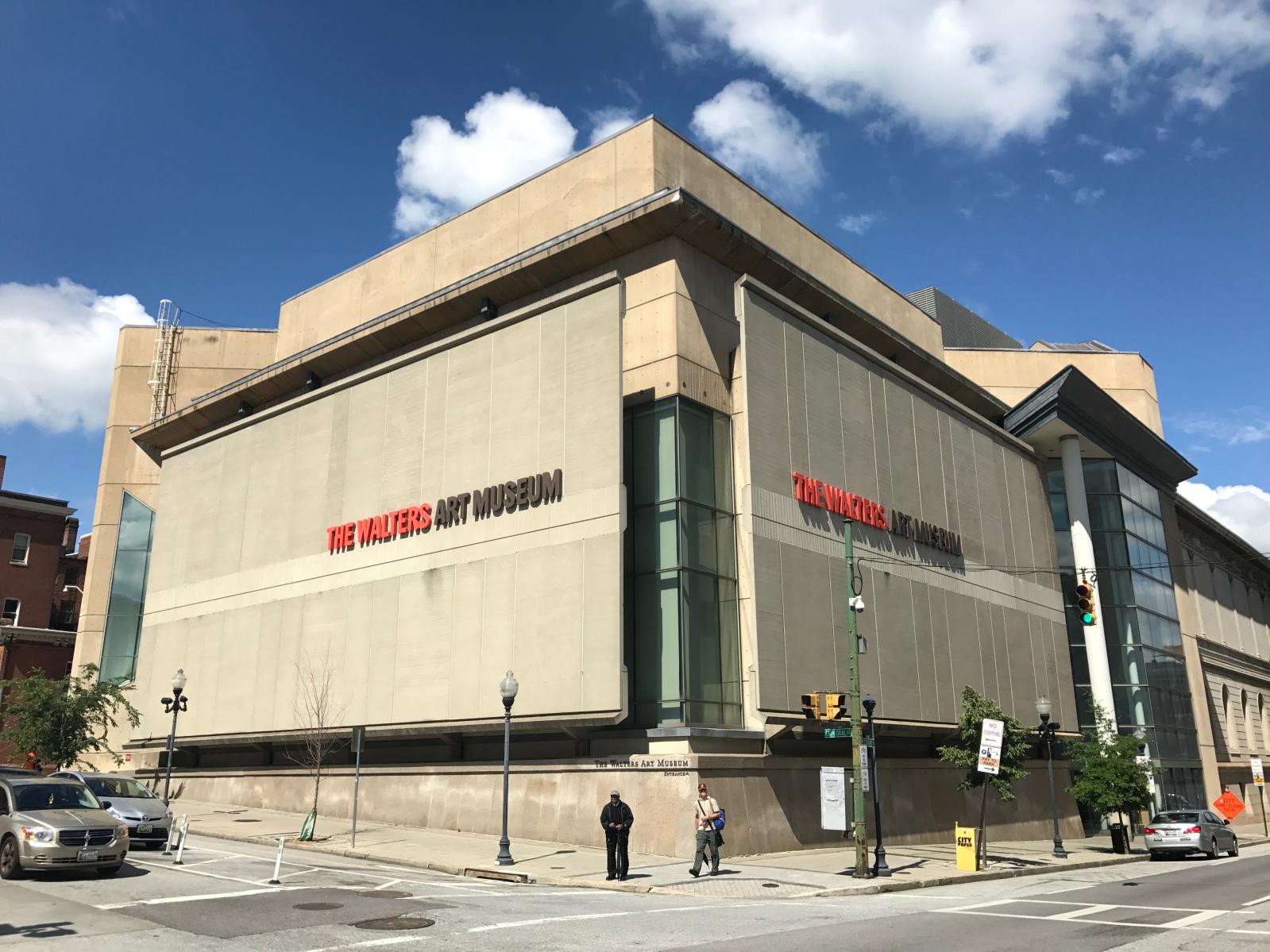 The Walters Art Museum is among numerous American institutions confronting the legacy of racism and exclusion that permeates virtually all aspects of social life in the United States. After a nearly four-month closure due to the COVID-19 pandemic, the museum reopened on March 17 with updated wall texts and a newly written institutional history posted on its website. These changes focus on the Walters and their previously undiscussed support of the Confederacy and racist ideologies. The updated history also reflects on the manner in which the family’s views informed their approach to collecting and shaped the museum’s early holdings and institutional identity.

The Foundational Collection
When he died, Henry Walters (1848–1931) bequeathed his collection of nearly 22,000 art objects, as well as two buildings, and an endowment to the city of Baltimore, “for the benefit of the public.” Originally called the Walters Art Gallery, the institution opened as a municipal museum in 1934. The foundational gift reflected Henry’s tastes, as well as those of his father, William T. Walters (1819–1894), who started the collection. William’s early purchases mostly included contemporary local and nationally-renown American artists, such as Alfred Jacob Miller, who documented the early fur trade in the West, and Asher B. Durand, a landscape painter associated with the Hudson River School. At the outbreak of the American Civil War in 1861, William, who supported the Confederate side, moved to Paris with his family. There, he immersed himself in the French art world, commissioning works from Jean-Léon Gerome, Honoré Daumier, and Antoine-Louis Barye. Barye remained one of William’s favorite artists and he amassed a large collection of the artist’s animal paintings and sculptures. In 1884, William donated to the city of Baltimore five large bronzes by Barye: a cast of the seated lion from the Tuileries Palace and replicas of the four sculptural groups—War, Peace, Order, and Strength—designed for the Louvre.

While still in Europe, the Walters traveled to London for the 1862 International Exhibition and were particularly taken by the Japanese and Chinese exhibits, purchasing a number of objects there. Returning to Baltimore after the Civil War, William continued to primarily collect European and Asian art. In addition to working with a number of European dealers, he often purchased art objects at international exhibitions, in particular, in Paris (1867 and 1878), Vienna (1873) and Philadelphia (1876). When Henry took over after William’s death in 1894, he expanded the collection to include early Italian and Northern art, as well as Greek and Roman antiquities. In 1902, he bought the Don Marcello Massarenti collection en bloc, with a total of 1700 pieces. Although it was later discovered that the collection included a number of forgeries, the purchase still brought in many authentic pieces that became the foundation of the Walters’ rich holdings in Ancient and Italian art.

Tackling the “Encyclopedic” Museum
On the occasion of its reopening last month, the Walters Art Museum introduced a new installation, “Building the Collection: 19th-century European and American Art,” that features many objects from the foundational collection. The accompanying wall text highlights the fact that “William and Henry Walters used their wealth, power, and social connections to collect art that reflected their 19th-century, Eurocentric worldview, which saw the height of human artistic production as a progression from Ancient Egypt, Greece, and Rome through the Italian Renaissance.” In addition to focusing on the legacy of the museum’s founders and their collecting strategies, this intervention also questions the concept of the “encyclopedic” museum as representative of all human achievement. Instead, it approaches the Walters’ foundational collection as a selective and ideologically loaded interpretation of what was considered “culturally valuable and meaningful art” at a particular time. In addition, the current reinstallation features works that have been acquired by the museum since 1934 with the aim of filling gaps in the founders’ collecting, such as works by artists of color.

The Walters and the Confederacy
One of the most important aspects of this reckoning with its institutional history is the museum’s explicit acknowledgment of the founders’ ties to the Confederacy. Before and during the Civil War, William Walters used his financial and political capital to promote public opposition to the Union cause. In April 1861, he funded a salute ceremony honoring the surrender of Fort Sumter to Confederate forces, the battle that marked the official start of the war. He also played an important role in organizing the Pratt Street Riot on April 19, 1861, a violent conflict on the occasion of the Union troops being transported through Baltimore by railroad. Known as the “First Blood Shed of the Civil War,” it resulted in the first deaths by hostile action in the war.

The Walters’ support continued after the Civil War with both William and Henry commissioning and funding Confederate monuments. In 1887, William commissioned a statue of Chief Justice Roger B. Taney for Baltimore’s Mount Vernon neighborhood. Taney wrote the majority opinion in the Supreme Court’s Dred Scott decision (1857), which ruled that Black Americans, free or enslaved, could not be citizens (the statue was removed from public view in 2017). Similarly, in 1909, Henry funded the construction of the monument to former Attorney General of the Confederate States George Davis in Wilmington, North Carolina (the statue was removed in 2020).

The newly written history of the museum also acknowledges that the Walters’ wealth and social position were a direct product of participating in Southern economies based on slavery and its legacies. Their wealth initially came from distilling and marketing liquor, and later from railroads and banking. Through these enterprises they depended on and profited from racist labor policies and practices. In the joint statement, the museum’s Director Julia Marciari-Alexander and Chair of the Board of Trustees James H. DeGraffenreidt, Jr. outline the need for acknowledging these histories: “We have a responsibility to engage openly with the history of our origins and the art we steward. By doing so, we can understand how individuals and cultural institutions contribute to the perpetuation of racism and systems of inequity and instead work to ensure an inclusive and anti-racist environment for visitors, volunteers, and staff.”

The Walters Art Museum follows in the footsteps of other Baltimore institutions reflecting on their histories and present policies. In December 2020, John Hopkins University published new evidence of the fact that its founder held enslaved people in his home until at least the mid-1800s. The Baltimore Museum of Art also made the news in late 2020 with the announcement of selling a work by Andy Warhol to raise money to purchase works by artists from underrepresented groups. As cultural institutions grapple with a seismic shift in consciousness of the foundational nature of racism within the United States, Baltimore institutions – including the Walters – are actively exploring acts of acknowledgment and restitution.

Crystal Bridges: The Museum that Walmart Built
Newsfeed
See all news
Is Afghanistan's Art Safe Under the Taliban?
Samsung Signs Partnership with Louvre
Newly Discovered Van Gogh Sketch Authenticated
Ancient Handprints Found in Tibet: the Oldest-Known Art?
Not to be missed
Cultural Heritage
An Architectural Gem: The Birth of Saint-Quentin's Palais…
A history impregnated with the industrial spirit of the 19th century,…
Cultural Heritage
From Caesar to LUMA: Arles, a City of Art and Culture…
Situated on the banks of the Rhone the provençal city of Arles has…
Cultural Heritage
Under the Floral Spell: Art, Architecture and Roses at…
Every year the gardens of Bagatelle, in Paris, attract rose gardeners…
Cultural Heritage
Villa E 1027: Eileen Gray's Masterpiece Rises from the…
The architectural masterpiece designed by Eileen Gray in Roquebrune-Cap-Martin…