An extraordinary house, the Clos Saint-Bernard, today known as the Villa Noailles, sits near the summit of a hill in Hyères, a small town on France’s Mediterranean coast. 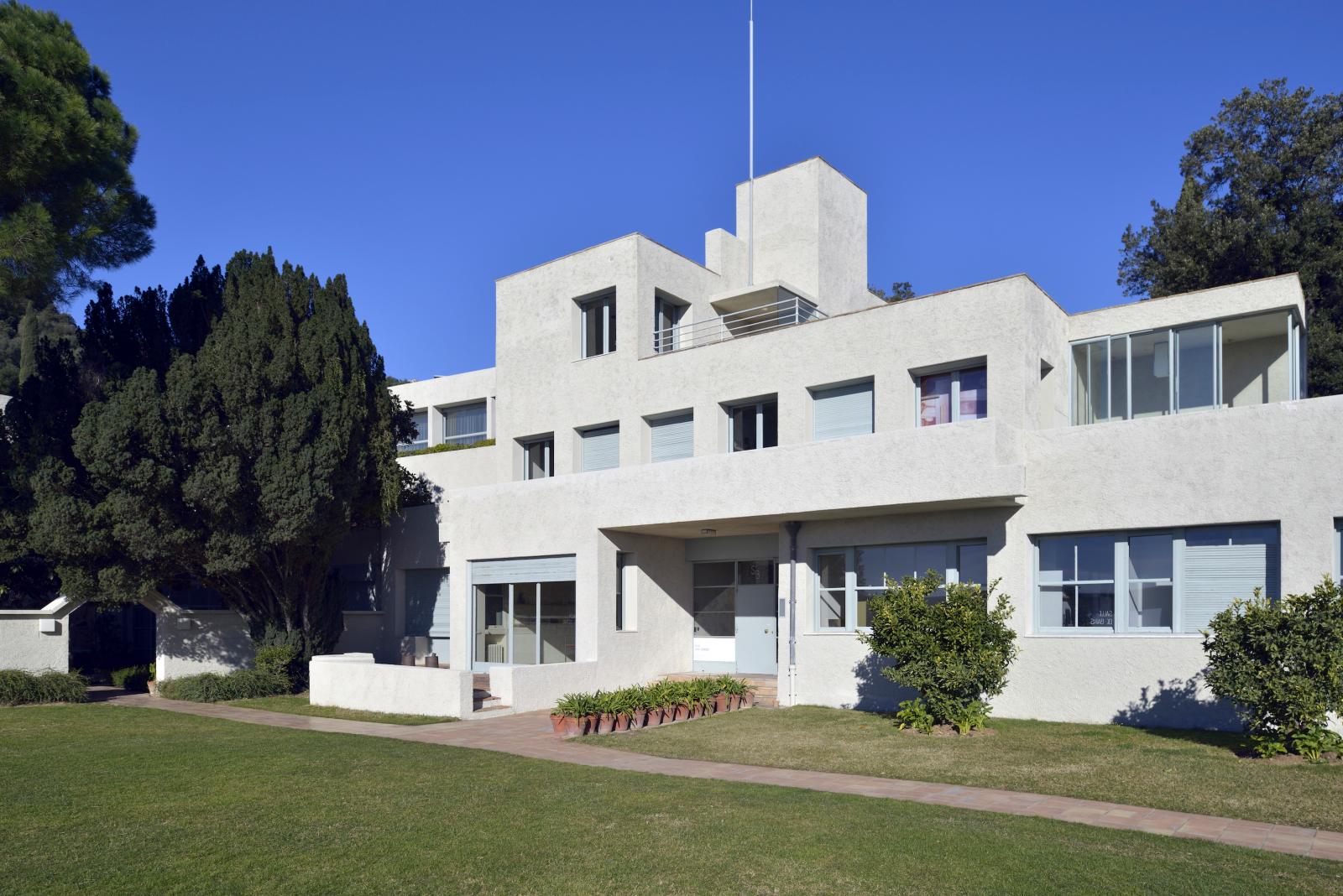 Like many a high-society marriage in those faraway days, the union contracted in 1923 between Charles de Noailles and Marie-Laure Bischoffsheim had nothing to do with love. While the 31-year-old viscount offered all the prestige of a noble lineage stretching back to 1225, his 20-year-old bride, despite counting among her maternal ancestors the Marquis de Sade, was coveted for the immense fortune she had inherited as the only daughter of a Jewish banker of German descent. So far so conventional. What no one had imagined, however, was that the newlyweds would use their wealth and position to champion the Modernist avant-garde, and through their patronage become sensational celebrities in their own right, eccentric incarnations of the Zeitgeist. And, like countless patrons before them, one of the ways they did this was by building an extraordinary house, the Clos Saint-Bernard, today known as the Villa Noailles, which sits near the summit of a hill in Hyères, a small town on France’s Mediterranean coast.
By far the best introduction to the villa is the 1929 silent film Les Mystères du château du Dé (The Mysteries of the Chateau of Dice), which was commissioned by the Noailles from the Surrealist artist Man Ray. It opens with a throw of the dice — the dé of the title, since the villa’s cubic volumes reminded Man Ray of a line from Stéphane Mallarmé: “A throw of the dice will never abolish chance” — whose result sees two mysterious figures setting off at dawn on a motor journey from Paris to the south of France. The modernity of the scenario is immediately established by the choice of locomotion, for not only is the burgeoning automobile age celebrated in the cross-country dash, but the vehicle in question is a Voisin, built by the car and airplane manufacturer Gabriel Voisin, who had financed Le Corbusier’s notorious 1925 Plan Voisin for the reconstruction of Paris. Thanks to the camera mounted on the hood, the viewer takes the driver’s seat as we arrive in Hyères and begin to climb the hairpin bends that switch back and forth up the hill. But we know where we’re going, since we’ve already been given a glimpse of our destination, as if in a dream: in Man Ray’s tantalizing first shot of the villa it appears like a Modernist Camelot, perched in the trees below a genuine medieval fortress, whose dark towers stand in lugubrious contrast against the horizon.
A wedding gift from Charles’s mother, the stunning site on which the house stands was home to the ruins of a Cistercian monastery, whose surviving vaulted chambers were incorporated into the new complex. Where the accommodation was concerned, the couple’s aspirations were initially modest — “a little house, interesting to live in,” as Charles put it in a 1923 letter — but their artistic vision far more radical. After considering both Ludwig Mies Van der Rohe (too busy) and Le Corbusier (too authoritarian), they chose as their architect Robert Mallet-Stevens, whose only notable building to date was an unfinished jazz-age villa for the couturier Paul Poiret.
As first completed in 1925, the Villa Noailles was an elegant, compact play of horizontals and verticals, perched in the hollow of the hill above the convent, whose remaining vaults supported an enclosed garden in front of the new house. The upper two stories contained bedrooms, the lower level further bedrooms, a small sitting room and a dining room (the kitchen was off in an annex to one side), while the main reception spaces were located in the old monastery below, linked to the new house by a subterranean stairway. The linchpin of the composition was Mallet-Stevens’s stair tower, which terminated in a covered lookout, while at garden level rectangular “windows” cut into the wall framed the sea view as a series of spectacular pictures.

One could be forgiven, on seeing its rendered, orthogonal, “cubist” exterior, for assuming the villa was constructed in that most Modernist of materials, reinforced concrete. But in fact no firm in the region was capable of building in concrete in 1923, so local contractor Léon David used traditional methods. As work neared completion, a serious disagreement marred the otherwise cordial relationship between client and architect. As Charles wrote to Mallet-Stevens on April 29, 1925: “…if you remember, I told you on the first day that I could never stand anything that would have a uniquely architectural purpose and that I wanted an infinitely practical and simple house … [The stair tower] represents everything I wished to avoid … Since I went up [to the lookout], I’ve realized I’ll never go up there again, and its architectural aspect will bother me more each day.” Despite the architect’s pleas, the tower was truncated forthwith, and the lookout replaced with a windsock, a nod to the nearby airport whose planes, those miracles of modernity par excellence, could be observed arriving and departing on the peninsula below.
When the Noailles commissioned the villa, it was as a winter residence, a south-facing home-cum-preventorium that followed medical recommendations with respect to the fight against tuberculosis. As the 1920s wore on and heliotherapeutic ideas gained ground, the Côte d’Azur became a year-round destination, while the Noailles’s burgeoning social life soon filled the house to beyond capacity (Marie-Laure would later describe her time there as like running a hotel). As a result, between 1927 and 1932 the couple extended the villa. Their first addition was the salon rose, a new reception room at the rear, whose position up against the hillside precluded windows, leading Mallet-Stevens to commission the maître-verrier Louis Barillet to fit it out with a spectacular “cubist” glass ceiling. This would be echoed in the indoor swimming pool, completed in 1928, whose roof was constructed in geometrically arranged glass block by the firm Dindeleux (the same company that built the famous glass-brick walls of Pierre Chareau’s Maison de Verre, in Paris), and whose front “wall” comprises giant glazed panels that, like automobile windows, can be wound down out of sight, opening the pool up to the adjacent terrace. A gym and a squash court soon flanked the pool on either side, while behind, new wings of guest rooms spread yet further up the hill.
Inside, true to the hygienist principles of the day, wardrobes and closets were all built-in, walls painted in easily washed white Ripolin paint, and each bedroom provided with an adjoining bathroom. At Charles’s insistence, electric clocks were installed throughout, the time they told being centrally synchronized so that no guest would ever be late for the various leisure activities that cadenced the course of the day. Today, nine decades later, we can get an idea of what those activities involved by watching Man Ray’s film: messing around in the pool, turning circles in the exercise wheel, weight-lifting and gymnastics — the whole prophylactic hygienist program for a healthy nation, undertaken in the sports uniform of dark shorts and striped tops issued by the Noailles to each of their guests.

But unlike in the sanatoria or open-air schools that proliferated in interwar France, the fine and the decorative arts also had their role to play at the Villa Noailles. On arrival, visitors were greeted by Jacques Lipchitz’s sculpture La Joie de vivre, turning slowly on a motorized base, while inside, in addition to works by the many artists the Noailles patronized — Picasso, Dalí, Mondrian, Ernst, Laurens and Brancusi to name just a few —, they encountered furnishings by all the “hot” designers of the day — Djo-Bourgeois, Marcel Breuer, Pierre Chareau, Jean-Michel Frank, Eileen Gray, a young Giacometti — as well as the flower-arranging room painted according to a design by the founder of De Stijl, Theo van Doesburg, and Charles’s open-air bedroom with its retractable glass walls by Jean Prouvé and suspended metal bed by Chareau. Looking out from one side of the closed garden, or from the vaulted reception room below, they would have been surprised to discover the “cubist” garden that Charles had commissioned from Armenian architect Gabriel Guevrekian after admiring his work at the 1925 Exposition internationale des arts décoratifs et industriels modernes (International Exhibition of Modern Decorative and Industrial Arts)
Not only did the Noailles commission these artists, they socialized with them too, at elaborate balls in their Paris home and more intimately in Hyères. But the idyll was shattered in 1930, when one of their protégés, Luis Buñuel, a regular guest at the Clos Saint-Bernard, completed his film L’Âge d’or (The Golden Age), which was entirely financed by the Noailles and whose première they organized at Paris’s Cinéma du Panthéon. Blasphemous, anti-clerical and anti-bourgeois, the movie caused a world-wide scandal: roundly condemned by conservatives and the church, it was immediately banned in France. Charles was forced to resign from the Jockey Club, in Paris, and ultimately retired to his garden in Grasse, while the Clos Saint-Bernard became the domain of Marie-Laure, who sought to “demodernize” the villa, as she put it, finally turning it into a real home rather than the hygienist art hotel it had been in its heyday. She would occupy the house, surrounded by art, eclectic clutter and her many artist friends, until her death in 1970.
In 1973, Charles, who had no use for the house, sold it to the municipality of Hyères, which, unsure what to do with the property, left it to rot for two decades. It was finally restored in the 1990s, and in 2003 opened to the public as an art center, whose programming seeks not only to preserve the Noailles’ memory but also to continue their tradition of artistic patronage through annual festivals of fashion, design, music and photography.

Michael Likierman: a knight in shining armour for Alpes-Maritimes heritage

Étienne Dinet's very promising outlook
Newsfeed
See all news
Due to the summer holidays there will be a pause in the newsfeed. We will be back Monday, August 24th. Have a wonderful summer vacation!
Met Museum in New York acquires Wangechi Mutu sculptures
US House of Representatives vote to create a national museum dedicated to Latin Americans
Church volunteer confesses to starting the Nantes Cathedral fire
Not to be missed
Heritage
The Villa Majorelle: totally Art Nouveau
The amazing Villa Majorelle in Nancy stands at the crossroads between…
Heritage
Caillebotte’s family home
Heritage
Zuber: the art of wallpaper
1790: the golden age of wallpaper. The Zuber factory strives to…
Heritage
Codognato: in death, as in life!