The amazing Villa Majorelle in Nancy stands at the crossroads between the arts and industry. Restored and refurnished, it is now open to the public. 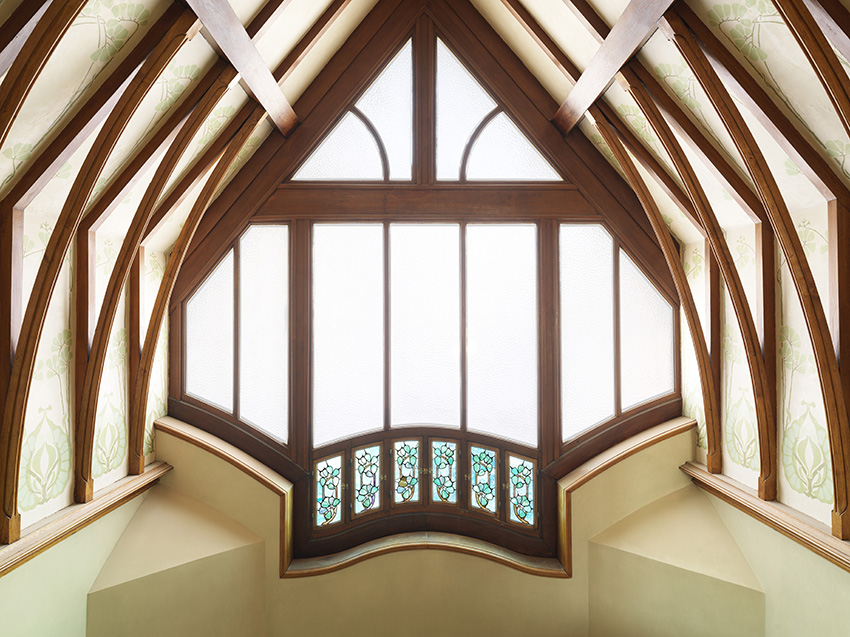 Its opening had been eagerly awaited. Built 1901-1902, the Villa Majorelle, the first entirely Art Nouveau house in Nancy, laid the foundations for the adventure towards a total work of art. By 1890, the soaring output of Nancy designers Gallé, Daum and Majorelle, to name but a few, were in high demand from Paris dealers. But their art lacked an architectural dimension, even as experiments were taking place all over Europe.
The Nancy cabinetmaker, decorator, wrought ironworker, artist and industrialist Louis Majorelle (1859-1926) filled the gap. The entrepreneur of a family business specialising in making copies of period styles, he was able to orient his business towards modern production. Majorelle undertook the construction of his family home, the Villa Jika named after his wife. He wanted it to be simple yet comfortable, elegant yet not luxurious. Looking no further than his professional and social network in Paris, he found his architect: the 25-year-old Henri Sauvage (1873-1932), with whom he had worked on the Café de Paris in 1898, but who had not yet designed a building in his name.

Critics rushed to see the completed villa, which was considered “modern” and anti-academic. Contemporary photographs show it surrounded by a one-hectare (2.4 acres) park. A century later, tightly squeezed behind enclosed walls, it looks a bit cramped in its built-up, urbanized neighbourhood, yet the slender, monumental chimneys crowned with enamelled stoneware by ceramist Alexandre Bigot (1862-1927) herald the presence of an extraordinary building.

Anti-academic
Sauvage kept the traditional villa plan, but designed a bold exterior, creating four stylistically disjointed façades shifting from the picturesque to an almost classic sobriety. He thumbed his nose at symmetry and created a dialogue between the exterior and interior, for example a recess that forms the staircase’s volume on the north façade very visible, the big bow window of the dining room on the south side and an asymmetrical setback with three different-sized balconies and three terraces (two of which remain).
The building’s decorative dimension is not immediately evident. Seven monumental chimneys form a "graphic" skyline. Some masonry elements, such as the window mullions or the top of the staircase, end in floral stems. Other features added to the structure, such as the large, purely decorative metal roots that appear to be holding up the balcony of Majorelle's workshop.

Nature as leitmotiv
With few exceptions, Sauvage designed the villa’s exterior decoration. On the other hand, the interior was Majorelle’s exclusive realm. "Quite quickly,” says Valérie Thomas, curator and head of the Nancy School Museum, which owns the property, “the villa went from being Sauvage's to Majorelle's, because the latter played a key role in everything to do with interior decoration." For the sake of convenience, his workshops mass-produced the furniture and ironwork and implemented a key Art Nouveau concept: every utilitarian feature must have an aesthetic dimension. Here, nature is the common thread.
Honesty, his favourite flower and a symbol of prosperity, is everywhere. He used the pine cone as the motif for the living room furniture and ivy decorates the staircase handrail. Majorelle also fostered synergy between talented craftsmen and artists. He entrusted the master glassmaker Jacques Gruber with the creation of the stained glass windows, painter Francis Jourdain with the amusing animal frescoes, Henri Royer with the evocation of rural figures and the Daum factory in Nancy, with which he regularly collaborated, with the lighting. And being a savvy businessman, he had interior views of certain rooms published in his sales catalogues.

Remarkable woodwork
The project focused on "the idea of showing an inhabited house, of being in Louis Majorelle's home rather than in a museum," says Valérie Thomas. There are no labels on the walls for visitors, just a few discreet signs showing the way.

A lived-in house is also a furnished house. The museum has tried to find the original pieces, such as those in the bedroom (bed, wardrobe, chests of drawers, bedside table), unique furniture that has never been reproduced. Elsewhere, similar items replace some of the originals. The museum also takes advantage of the villa’s space to display decorative objects, precious knick-knacks and Majorelle's collaborations with other craftsmen and companies.
The idea of restoring the Villa Majorelle dates back to the major École de Nancy or Nancy School celebration in 1999. The city of Nancy’s Art Nouveau tour has undoubtedly been enhanced by this indispensable stop, which could draw around 35,000 visitors a year.

Ernst Haeckel, the Zoologist Who Inspired 20th-Century Art
Newsfeed
See all news
6,000 Visitors for the Drawing Now Alternative Fair
Women’s History Museum Gains Representation by Company Gallery
World Record for Alix Aymé at €322,600
Ian Cheng’s “Life After BOB” to Tour Internationally beginning in Arles, France
Not to be missed
Cultural Heritage
Discover the Treasures of the National Ceramics Museum…
Located just outside Paris, the Sèvres Museum is a treasure trove…
Cultural Heritage
The Historic Hôtel de la Marine in Paris Emerges from…
The palatial mansion on Place de la Concorde in Paris has just opened to…
Cultural Heritage
The Cligman Collection at Fontevraud Abbey: The Art of…
Martine and Léon Cligman have donated their 900-work collection…
Cultural Heritage
The Bourse de Commerce: From the "Queen's Mansion" to…
Initially scheduled for January 23, the opening of the Pinault collection's…