The Tubogas: The Amazing Tube That Revolutionized Watchmaking

The Tubogas is a flexible metal pipe patented in 1881. In the 1940s, it was discovered by jewelers, who gave it a glittering future. 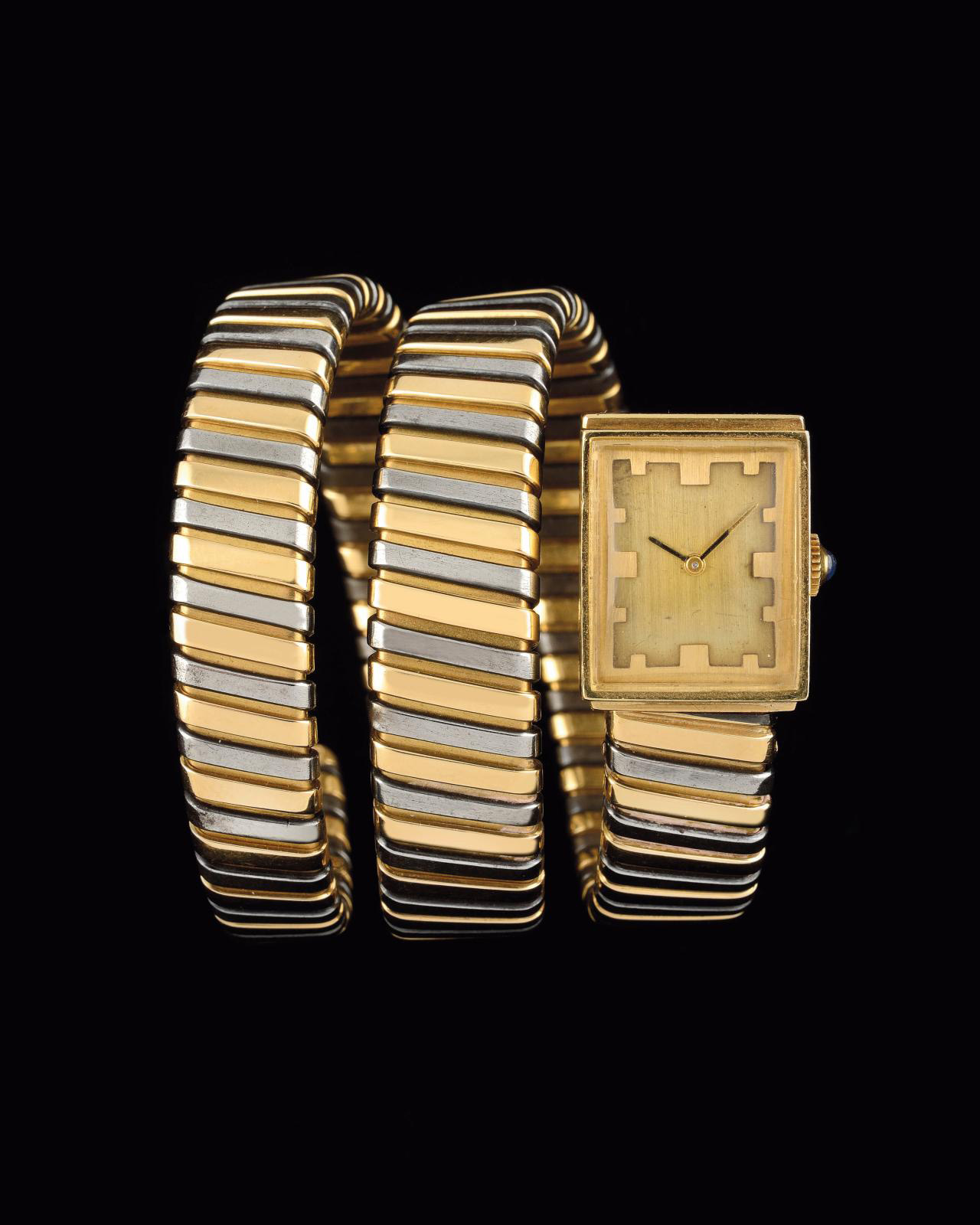 Depending on the times, uses and users, Tubogas changed names almost as often as a snake changes its skin: "skeleton key", "spirotube", "gas pipe", "Serpenti". But it was the Second World War that sealed its destiny. The Tubogas was originally a corrugated tube made of articulated bands used to transport pressurized gas. Today, the Tubogas watch is creating a buzz in auction rooms, powered by the aura of Roman jeweler Bulgari and the spotlight on its iconic Serpenti watch, a Tubogas/snake hybrid. The latest one fetched €12,300 at the Hôtel Drouot—€2,000 above its high estimate.

The 1937 Universal Exhibition brought together the arts, technology, modern life and the latest advances in jewelry and fine watchmaking. Jewelry was sucked into the wake of racing cars: their spring-mounted stainless steel exhaust pipes were an avatar of the modular Tubogas, which inspired Parisian jewelers Fouquet, Mauboussin, Boucheron and especially Van Cleef & Arpels. Its added value was multiple: Art Deco had had its day, platinum had been requisitioned by the army and was nowhere to be found and stones were blocked at the borders. But yellow gold could be recycled ad infinitum. How could it be enhanced and given that little extra sparkle and creativity without using diamonds? Layered or molded plaques, large volumes, weighty looks and other approaches were brought into play. Gold thread might be knitted or coiled. Jewelers made do on a shoestring. It was a bit like substituting cork for leather (which was unavailable) in the famous platform soles of the time.

Everything was in the "wow" effect. The Tubogas was sensational. Its flexibility was crazy, a series of gold-threaded grooves entirely articulated by hinges concealing micro-springs. It was stretched, loosened up or knotted, as with Van Cleef & Arpels, which called it a "skeleton key". The retro-style was in vogue at the time. Volumes were massive. Goldsmith's work took precedence over that of jewelers. Gold was the only safe investment, so jewelry was judged by its weight! Twenty grams were used in rings, 100 in bracelets. That did not tip the scales in their favor at all. In the 1940s, pitiless jewelry critics reduced their vocabulary to three words: "crude", "clumsy" and "fussy".

Three Powerful Women
The tubogas owes its survival to three modern jewelry icons—three young designers whose vision transcended time: Cartier’s Jeanne Toussaint, Boivin’s Suzanne Belperron and Van Cleef & Arpels’ Renée Rachel Puissant. What happened to the men of those great houses? Some were at the front. Others, like the Arpels, went into exile, fleeing the Vichy regime. So, the girls' hour had come. These bold women saw the potential of the Tubogas. They feminized it, sometimes covered it with flowers, surrounded it with starry balls, gave it chic elegance and then added small patriotic touches of blue, white and red. These were liberated women, though the Gestapo arrested two of them. That is what style is called. Their signature, which is nowhere to be seen but can be identified by experts, was a guarantee of phenomenal added value. Their legacy includes full volumes, sun-drenched yellow gold and the triumph of women. Is that why Roman jeweler Giorgio Bulgari was interested in the Tubogas at the same time? Did he realize how much voluptuousness its flexibility concealed?

From retro style to la dolce vita
Born into a family of Greek goldsmiths, Giorgio Bulgari had to deal with the same supply constraints as his Paris colleagues in the 1940s. The same problems inspired the same answers! But his Tubogas was different: it took the form of not jewelry but watches with bracelets evoking writhing snakes, imbued with an ultra-sexy animal vitality that closely espoused the skin. With one, two or three-rows, his bracelets created a link between Paris and Italy. Less rigid and more Mediterranean, Bulgari drew inspiration from jewelers' Greco-Roman roots. He had the brilliant idea of giving the Tubogas a new cultural identity based on first-century imperial Rome’s serpentine armlets, renaming it "Serpenti". the aesthetics were pure and powerful, with a snake-head shaped dial and a tapering tail. Watches became jewelry, even though fitted with sturdy mechanical movements made by Swiss watchmakers Jaeger-LeCoultre and Movado. A legend was launched, based on the symbolism of the snake, that hypnotic predator. The serpent imbued the Tubogas with a powerful attraction enhanced further when it was coiled around the wrist and forearm. Actress Elizabeth Taylor was among the first to understand the mystique. She wore it on the set of Cleopatra in 1961, when she fell in love with Richard Burton. She was all anybody was talking about: her tantrums, her fees and her bracelet.

Changing skins
It was a brilliant advertisement, especially since the star’s emerald-eyed serpent, an extravagant reproduction of a snake, held a diamond watch dial in its wide-open mouth. Bulgari made the bracelet more sophisticated by creating the illusion of superimposed scales or rings. A neo-realistic mutation for a creature ever larger than life, which hatched in the 1970s. Its skin, shimmering with enamel and hardstones, was in South Sea blue or polychrome, with a little forked tongue flicking out of its mouth, and cabochons forming its slit-pupil eyes. This new generation of watches embodied a form of Italian lifestyle: the golden youth of the dolce vita years. Bulgari made the most of this viviparous myth with an ingenious advertisement illustrated by a capital "B" overflowing with Serpenti watches that caught the sharp eye of Vogue editor-in-chief Diana Vreeland. Her own version was a pink and white enamel necklace that could be wrapped several times around the neck or worn as a belt. An extension of the Serpenti species, which grew to lengths of nearly 1.20 meters (four feet): a record not only of length but also longevity for this charming piece, which started out as a gas pipe and became a jewelry icon.

the tubogas:
five key dates
1881
A patent is filed for the tubogas. Greek jeweler Sotírios Voúlgaris, the future Bulgari, moves to Rome.
1905
Bulgari opens his Via dei Condotti store
1939
A decree-law is issued "prohibiting or regulating the export of capital, foreign exchange transactions and the gold trade".
1961
Joseph L. Mankiewicz begins shooting Cleopatra at Cinecittà
2014
Celebration of Bulgari’s 130th anniversary
"The snake is the ultimate trendy motif in the jewelry world. People never get tired of it."
Vogue editor-in-chief Diana Vreeland

When Women Take Over Jewelry