The Tapestries of Aubusson: The Thread of Innovation

Could tapestry be an antidote to a territory's sluggish economy? This is the line adopted by the Cité Internationale de la Tapisserie d'Aubusson. Four years after its inauguration, the establishment is beginning to reap its rewards. 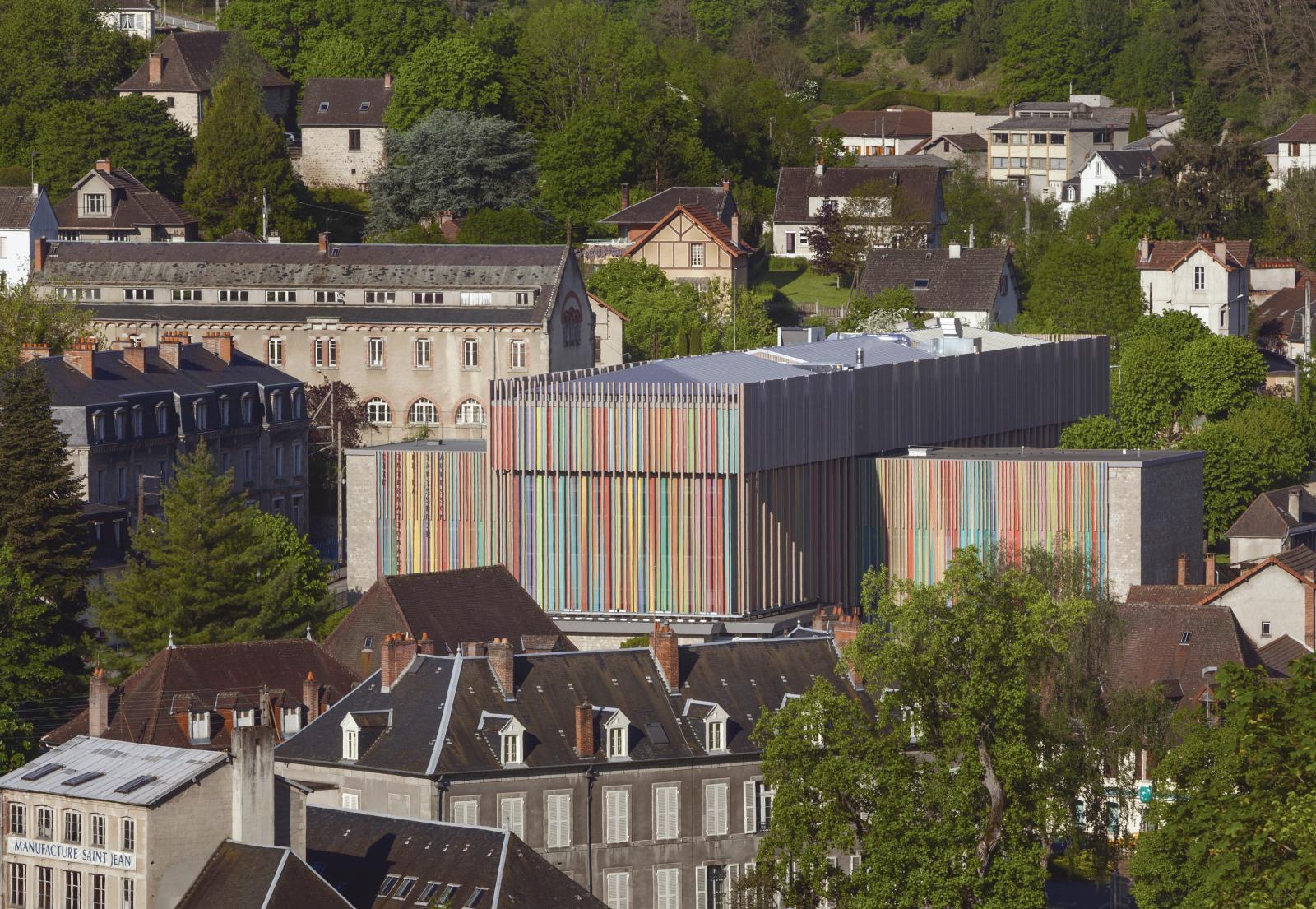 This is the only model of its kind in France and "its purpose is a little peculiar," to quote its inventive director, Emmanuel Gérard. Lying between the départements of La Beauze and La Creuse, the Cité Internationale de la Tapisserie d'Aubusson performs several roles, as a repository for the region's history of tapestry, an economic driving force for the territory, a textiles training platform, a centre of resources and a catalyst for contemporary creation. That's quite a few hats! In the heart of a region short of investment, its inauguration in 2016 embodied great expectations and hopes. The local population began to decline in the late 19th century and has struggled to recover ever since, making La Creuse France's second least-populated département after La Lozère. Activity is concentrated in the north, while in Aubusson the closure of the Philips factory at the end of the 1990s dealt the final blow to an already fragile economy. Despite the glory days under Louis XIV – when the workshops were granted the label "Manufacture Royale d'Aubusson" – and despite the artist Jean Lurçat and company, who revived the weaving spirit of the Limousin complex in the 20th century, the weavers at the site were languishing. Between 2000 and 2010, three-quarters of the sixteen workshops closed. The return to grace of weaving, for which the Cité is both the driving force and standard-bearer, has enabled four of them to reopen. "Tapestry is benefitting from the renewed interest in arts and crafts that began in 2005 with ceramics, and spread to textiles as from 2010," as we were told by Bruno Ythier, the most recent curator and scientific director at the Cité – who was shortly leaving. "At the last Lyon Contemporary Art Biennial, nearly half the works exhibited were textiles. Expectations concerning our collections are growing, and we refuse many requests for loans." This success is not due to any accident or the fortunate turnaround in the history of tastes: it is the direct result of management based on observation, transversality and experimentation.

Reflecting the art market
This logic is expressed in the establishment's acquisition policy. Begun forty years ago under the impetus of André Chandernagor (député for La Creuse from 1958 to 1983), the Cité's relatively new collection is focused on the Renaissance, the 20th century and contemporary creations. The latest historical purchase to date is a woven piece based on a work by Charles Antoine Coypel by the Vigne d'Aubusson workshops. At the other end of the time scale, the Cité responds to commissions, varying formats and procedures to fit with the art market and its needs and practices. Since the launch in 2010 of the Contemporary Fund, designed to manage calls for projects (now submitted every two years), other approaches have been tried out. "We needed to change a dialogue that was solely between artists and weavers, and make the institution part of it as well, and thus able to help the stakeholders surmount their fears," says Emmanuel Gérard. "With some projects, weavers had to be content with a slavish copy of the work. This was unsatisfactory from both the creative and economic angles, because of the use of numerous colours and slower production times. We became aware of the total dichotomy between an artist's price index, the cost of producing a tapestry and the average budget of a collector. We need to make creations affordable and allow pieces to be rewoven to support the arts and crafts industry." The first innovation is that a patron can now buy a model from its creator and the woven version of it can join the museum's collections. For example, in 2019, AG2R La Mondiale commissioned the French artist Clément Cogitore (Prix Marcel Duchamp 2018) to weave a screenshot, on the social media, of images of the 2011 Egyptian revolution.

Multiplying outlets
Since 2015, the Cité has been moving closer to art galleries interested in marketing an entire collection, whose prototypes belong to it. For example, seven furnishing pieces designed with Valérie Maltaverne and her team – the Ymer & Malta studio in Paris – hold sway on its walls. Lastly, the "Carrés d'Aubusson", square pieces in a medium format of 184 x 184 cm, aim to revive tapestry's position in the art market thanks to reduced production costs. "We want to reach out to both fresh audiences and artists who might never have thought of getting involved with this technique," says the curator, in front of the "square" by Raúl Illarramendi of the Karsten Greve gallery in Paris. Through these decisions, not only has the dialogue between artist and weaver been renewed and artistic daring championed, but the cost of producing a tapestry has fallen from €8,000 per square metre (representing three to four weeks of work) to €5,500 today. To shore up these different approaches, the Cité is considering forging connections with designers and interior designers. But alongside all these initiatives, the Cité has firmly maintained the tradition of large narrative series. Over four years, an exclusive set of thirteen tapestries and a rug based on the graphic work of J.R.R. Tolkien, author of the ultra-famous Lord of the Rings, have introduced a breath of fresh and innovative air into the technique.

Research and heritage
These economic opportunities go hand in hand with thinking that reflects the concerns of our time: respect for the environment. The accusation that the textile industry is the second most pollutant activity after oil is forcing the Cité to question its practices. Though over-consumption is not yet a threat, the matter is being explored with Marie-Anne Sarda, scientific advisor to the INHA (national institute for the history of art), on the use of more environmentally-friendly dyes, without sacrificing the durability of the pieces produced. This research will be formalised in a future dedicated training centre. The transmission of know-how is intrinsic to the very nature the Cité, built on the site of the former École Nationale d'Art Décoratif. Since 2011, it has been awarding a BMA (applied arts certificate) in arts of the loom to increasingly refined profiles, to open up its teaching to other disciplines. This year, a graduate of the École Nationale Supérieure des Beaux-arts is working alongside an archaeologist. On the strength of this experience, the latter aims to broaden the spectrum of her qualifications to include textile restoration skills.
The Cité's rise has been so rapid that it can now build its extension. Planned but not budgeted for when it opened four years ago, the new wing should be completed by 2023; the architect's competition is now underway. For €6 M (its annual budget does not exceed €1.5 M), the institution is aiming to add a graphic arts reserve, meeting rooms, residence venues for artists and temporary exhibition spaces. Covid-19 does not seem to have severely affected the tapestry world, which is a slow-moving one. At the post-lockdown reopening, the public, usually 90% from the region, turned up in large numbers. Now that's truly encouraging…

Dimitris Daskalopoulos: Contemporary Art Open to the World
Not to be missed
Cultural Heritage