The French television host is leaving his apartment in the ninth arrondissement and selling all his furniture, which might surprise you by its eclecticism that mixes the 18th century and contemporary design. 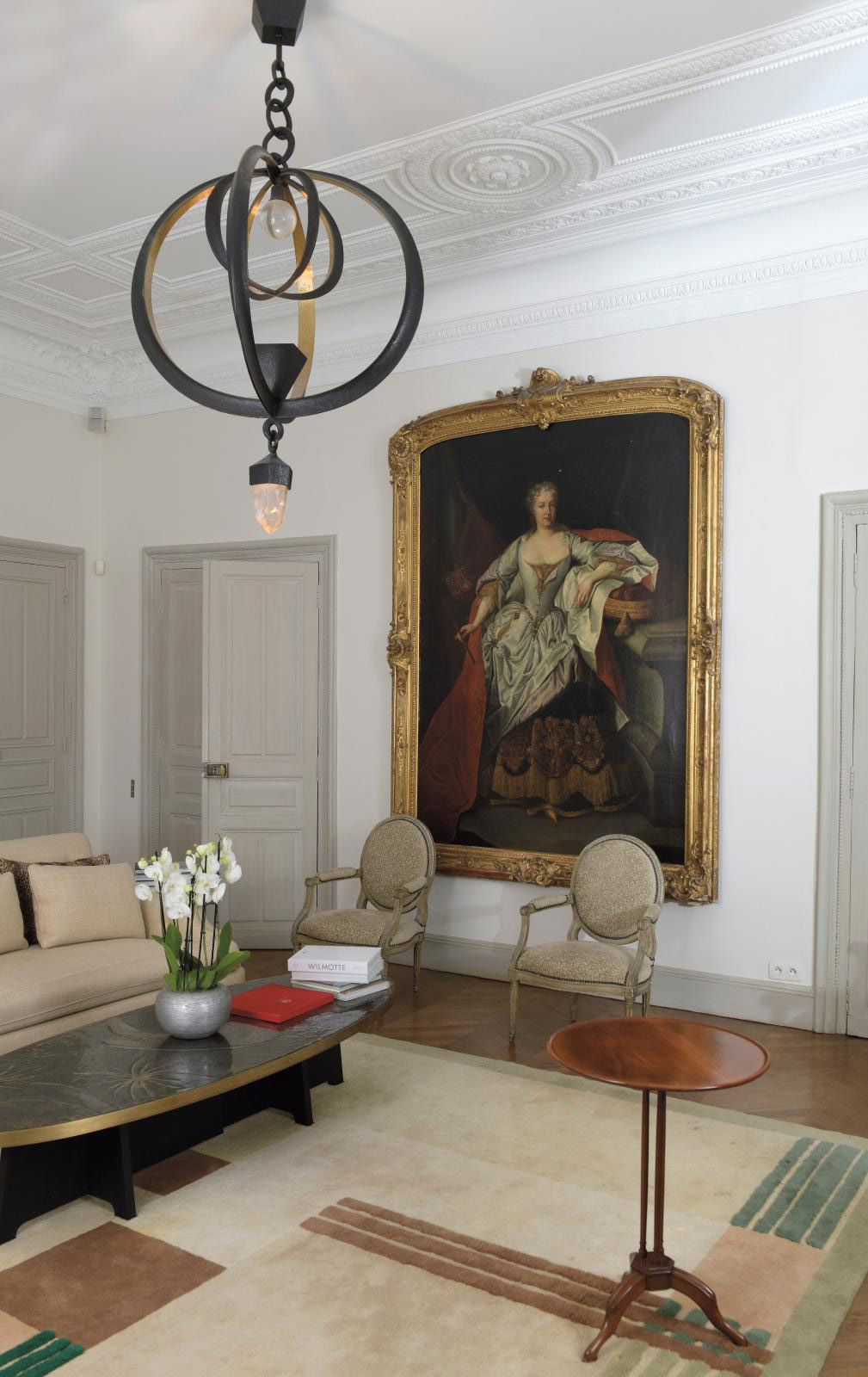 "Some people predict that the world will be completely different after Covid," says Stéphane Bern. In his case, the change took the form of selling his Paris apartment in the hôtel Rousseau in the ninth arrondissement and moving to the Perche region. He lived in Paris for 40 years, including 18 in the historic residence architect Pierre Rousseau built in the 18th century as his vacation home. Subsequent residents included Victor Hugo and artist Eugène Isabey (1803-1886). Mr. Bern is turning over a new leaf in his personal life. France’s "Mister Heritage" surprised many when he decided to permanently move into the royal and military college of Thiron-Gardais in Eure-et-Loir, which he bought in 2012 and restored at great expense. But the decision came to him naturally after spending lockdowns in the countryside, where at least he could fully enjoy his "pets and garden” and live to the rhythm of the seasons. The move was accompanied by a change of style. "My house in the Perche was already furnished,” he says, “so I decided to sell all the furniture in my apartment in the Hôtel Rousseau." Mr. Bern brought nothing with him but his archives and the approximately 15,000 books from his library. Some of the proceeds from the sale will go towards funding various works underway in the Perche region, such as the restoration of a 16th-century dovecote and the future temporary exhibition rooms in the parish hall. This is a personal heritage adventure, a laboratory allowing him to see how the restoration of such a historical jewel is carried out, moreover, without public subsidies.

From the 18th Century to Contemporary Design
"It wouldn’t make any sense if I brought everything I loved in Paris during the past 20 years with me,” says Mr. Bern, “especially since the pieces are smaller and this house has nothing of a Paris interior about it." Everyone will have the pleasure of discovering it. Perhaps they will be surprised by the successful combination of antiques, mainly Louis XVI, and contemporary furniture. "Jacob is one of my favorite carpenters and cabinetmakers," says the host of Secrets d'histoire­ (Secrets of History)—his television program/show on history. A pair of Louis XVI chairs with medallion backrests stamped "G. Jacob" is expected to fetch €2,000/3,000. Another pair dating from the Empire period with band backrests is from the Château de Neuilly, the residence of Louis-Philippe, duc d'Orléans (€1,500/2,000). They are attributed to Jacob. Clean lines and elegance are the common thread of the collection’s many Louis XVI chairs and pieces of furniture. Standouts include a mahogany-veneered pedestal table stamped Canabas (€5,000/6,000) and a mahogany-veneered flat desk stamped Adrien Antoine Goselin (€10,000/15,000).

Special Commissions
Mr. Bern is close to most of the contemporary designers whose works were in his apartment. They have made several pieces especially for him. For example, Stefan Mocanu, who founded the company Arte Fabrica in 2003, created a wool carpet based on a design by Geta Mocanu (€3,000/4,000), an imitation-bronze metal console in the style of Giacometti featuring a picador and a bull on the crossbar (€5,000/6,000) and a large oval coffee table with an enameled top with floral and metal decoration on a wooden core set in a bronze arcade (same estimate), which was in the living room and was the last item acquired for the Hôtel Rousseau. The first things he bought were two patinated bronze "Allusion" lamps with white fabric shades designed by Hubert Le Gall in 1997. They were made in a limited edition of 99 copies (€1,500/2,000 each). Mr. Bern and the Lyon designer, who have known each other for 30 years, share a taste for nature and whimsy. Mr. Le Gall’s furniture features fabulous animals and flowers. His beloved daisies form two tables in bronze with a black patina called "Marguerite dix fleurs" ("Ten Daisy Flowers"). Two copies numbered "EA 1/4" and dated 2007 are estimated €10,000/12,000. This has become one of the signature designs by an artist wooed by museums for their exhibitions, private individuals, and the City of Paris. Hervé Van der Straeten’s one-off, sphere-shaped Astrolabe hanging lamp in patinated and gilded bronze (€12,000/15,000) illuminated the eclectic décor of Mr. Bern’s living room in the Hôtel Rousseau (see photo). He commissioned the lamp and paid for it with money collected by his friends for his 50th birthday (he next bought a "Capsule" ottoman, estimated €1,800/2,000, and an "Épine 178" ["Spine 178"] lamp, €4,000/6,000). Mr. Van der Straeten, a favorite with great couturiers and artists, specializes in lighting fixtures and furniture featuring bronze work made in his own studio. In quite another vein, a monumental portrait of Elisabeth-Christine von Brunswick-Wolfenbüttel (1691-1750), the mother of Maria-Theresa of Austria and grandmother of Marie-Antoinette, stood out on the wall. It was first attributed to Carl Van Loo but is now believed to have been made by Martin Van Meytens, a painter at the court of Vienna from 1732 (€15,000/20,000). It was purchased at a 2014 sale at the Dorotheum auction house in Vienna.

The Inevitable Crowned Heads
This being Stéphane Bern, the sale will feature crowned heads and blood princes. The Portrait de Louis XVI portant l'ordre du Saint-Esprit et la Toison d'or (Portrait of Louis XVI Wearing the Order of the Holy Spirit and the Golden Fleece), attributed to Martin Drölling, is expected to fetch €3,000/4,000, and Portrait de Madame Sophie, fille de Louis XV (Portrait of Madame Sophie, Daughter of Louis XV), ascribed to Louis Michel Van Loo, €3,000/5,000. Adélaïde de Savoie, Duchesse of Burgundy and mother of Louis XV, was "clever at court and full of spirit and energy," wrote Saint-Simon. She is the subject of a c. 1680 painting by an artist of the Piedmontese school (€5,000/7,000). Mr. Bern’s soft spot for the English royal family is evident in the Hugh Cecil Saunders’ period silver print portrait of Prince Edward, the Prince of Wales, who became King Edward VIII and later the Duke of Windsor, in his full-dress Prince of Wales uniform holding a fur cap in the right hand and a ceremonial sword in the left (€1,500/2,000). Mr. Bern’s collection is surprising in more ways than one: it includes Eugène Boudin’s Paysage boisé (Wooded Landscape), estimated €12,000/15,000.


Do you see yourself as a true collector or do you buy things to decorate your home?
I collect paintings, but buy furniture to decorate my home and for its usefulness, although I always care about aesthetics. I lean towards the Louis XVI style but for more comfort, I turn to contemporary creations. My home was quite cozy. The Hôtel Rousseau had been converted to offices and I restored the part I owned to look as much as possible like an 18th-century house. I find the Louis XV style too fussy. What I like about the Louis XVI period are the clean lines, elegance, and bourgeois comfort. It was a time when the bourgeois class emerged in France and sought more ease and luxury in their home interiors.

You sold your collection at the Hôtel Drouot. Is that because you’re neighbors?
Yes, it's a place I know well. I was a sponsor of the Carré Drouot and Les Trois jours du quartier Drouot (The Three Days of Drouot). For years, I was also involved at the town hall of the ninth arrondissement, especially in cultural affairs. I couldn’t imagine selling anywhere else. I’d regularly have my Saturday lunch at the Cave Drouot. It’s my neighborhood. I’d go to see exhibitions and then buy online or by phone because I have little spare time and when you’re known it’s always a bit tricky to show up in an auction room. It can distort things. I also often go to the royal sales at Dorotheum in Vienna, where I bought the portrait of Empress Elisabeth-Christine von Brunswick-Wolfenbüttel in 2014. It was painted in the grand 18th-century manner that was all the rage at the courts of Europe. I bought it while working with Franck Ferrand on a book to reassess court painting. During that year of collaboration, I started buying court paintings and royal objects. The portrait added lots of personality to my living room. It’s my favorite object, my “masterpiece", but unfortunately, I wouldn’t know where to put it in my new home.

Your taste for contemporary furniture and design may seem surprising. What do you like about Van der Straeten and Le Gall’s creations?
The lines. These designers draw inspiration from history. They’re highly cultured. They reinterpret the past by embracing the present. They have a very personal spirit and inventiveness, and their creations blend in very well with the Louis XVI style. Even the console, the table, and the living room carpet that Stéphane Mocanu made especially for me fit into my 18th-century interior very well. It's good to surprise people! The "total look" doesn't make sense, like people dressed head to toe in Dior or Chanel. They’re insecure. I'm not saying I'm not, but I like mixing styles.

Did collecting and your fondness for objects come to you at the same time as your interest in history and heritage?
It came to me very long ago. My taste was different to that of my parents. They had 1970s-style furniture, which I disliked, but they passed their taste for buying and objects on to me. My parents would take my brother and me to see all the exhibitions. They introduced us to art and beauty. They trained our eye. We weren’t well-off, but I was lucky to grow up in a family that loved art and culture. When I was 16, I asked my parents to buy me an 18th-century print, which I always keep with me. What’s more, I inherited an Oeil (Eye) by kinetic artist Agam and associated it with the rest of my interior. Over time, you become less fixated on one style and open up to other horizons.
STEPHANE BERN - A PARISIAN INTERIOR
Salle 1-7 - Hôtel Drouot - 75009
Daguerre
Info and sales conditions
Catalogue