The Spirit of Modern Art: The Société Anonyme Collection

Hailed as the first museum of modern art in the U.S., the Société Anonyme was founded by artists Katherine S. Dreier, Marcel Duchamp, and Man Ray. Its collection offers a unique record of modernist innovation and experimentation. 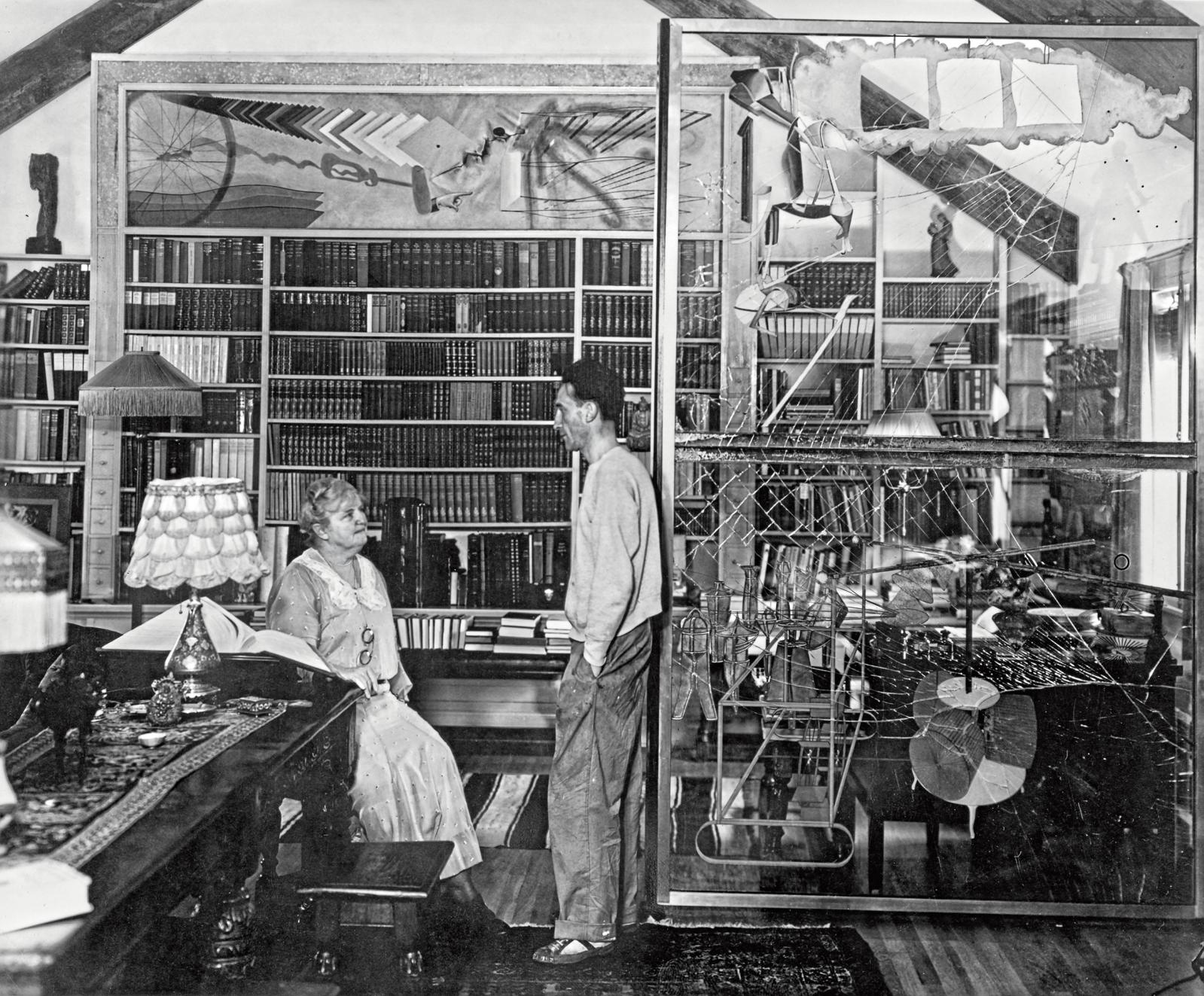 Katherine Dreier and Marcel Duchamp at The Haven, Dreier’s estate in West Redding, Connecticut, with Duchamp’s Tu m’ (1918) above the bookshelf and The Large Glass (1915–23) in the forefront, 1936–37, Photo by Leslie E. Bowman, Gift of the Estate of Katherine S. Dreier.
Photo courtesy of Yale University Art Gallery

Katherine Dreier and Marcel Duchamp at The Haven, Dreier’s estate in West Redding, Connecticut, with Duchamp’s Tu m’ (1918) above the bookshelf and The Large Glass (1915–23) in the forefront, 1936–37, Photo by Leslie E. Bowman, Gift of the Estate of Katherine S. Dreier.
Photo courtesy of Yale University Art Gallery

The Société Anonyme was an artists’ organization founded in 1920 by Katherine S. Dreier (1877–1952), Marcel Duchamp (1887–1968), and Man Ray (1890–1976). Over its existence from 1920 to 1950, the Société organized over eighty exhibitions of contemporary art and produced near thirty publications, in addition to assembling an extraordinary collection of artworks. A self-proclaimed “experimental museum” for modern art, it was managed by artists, allowing themselves, rather than critics and historians, to shape the narrative of the development of modern art.

Corporation, Inc.
When it was founded, the organization’s full name read “Société Anonyme, Inc.: Museum of Modern Art 1920.” Man Ray was the one to come up with the first part of the title, which uses the French and American terms for a limited-risk capital venture. In typical Dada fashion, it relies on repetition to create an absurdist denomination that subverts corporate vocabulary. Duchamp designed the Société’s sardonic emblem—a silhouette of a laughing donkey, or ass. While Man Ray’s contribution to the enterprise was limited, Duchamp remained actively involved in the Société’s affairs until its official dissolution in 1950. He was central to planning the Société’s activities and tirelessly called upon his extensive connections in the art world to secure loans and purchases for its exhibitions and collection. However, it was Dreier that was the driving force behind the organization, serving as its President and Treasurer.

Born in Brooklyn into a family of wealthy German immigrants, Dreier studied art at the Pratt Institute. As an artist, she enjoyed moderate success in the U.S. and Europe and she contributed two paintings to the groundbreaking 1913 Armory Show, which introduced the American public to European modernism. During her extensive travels in Europe, Dreier met Herwarth Walden (1878-1941) whose Der Strum magazine and eponymous Berlin gallery were important models for the Société Anonyme. Dreier was also influenced by the art and writings of Vassily Kandinsky (1866-1944), who became her life-long friend. In 1923, Dreier organized Kandinsky’s first one-man show in the U.S. and in 1925 she made him an honorary Vice-President of the Société, a position he held until his death in 1944. Dreier and Kandinsky shared an interest in Theosophy, a pantheistic belief system invested in the spiritual unity of all things and the idea of universal brotherhood. Dreier’s progressivist views on art as a force for social change seem to be at odds with Duchamp’s sardonic attitude towards artmaking and the art world. Nonetheless, their collaboration on the Société allowed for a productive balance of ideological and aesthetic approaches. The organization became a major source of support for avant-garde artists and played an important role in promoting their art for the American public.

America’s First Museum of Modern Art
At the time of its creation, the Société filled a critical gap in the American art world. In the period between the closing of Alfred Stieglitz’s modernism-focused 291 Gallery in 1917 and before the creation of the Museum of Modern Art (MoMA) in 1929, it was the only institution that supported contemporary art in the U.S. While the Société never had its own building, it started amassing a collection in 1923, presenting it, along with the diverse selection of borrowed works, in numerous exhibitions in venues throughout the U.S. and Canada. One of the Société’s most important shows was the International Exhibition of Modern Art, which took place at the Brooklyn Museum in 1926. It included 308 works by 106 artists from 23 countries and attracted over 52,000 visitors in seven weeks. The exhibition far exceeded the scope and diversity of the Armory Show by expanding the latter’s primary focus on France with a greater sample of Soviet, German, and Scandinavian modernism.

Dreier wished to use the exhibition to habituate the public to the new, and to some, still strange aesthetic of the avant-garde. For this purpose, she turned several exhibition galleries into middle- and upper-class interiors. Featuring a selection of figurative and abstract work by contemporary artists, the rooms were outfitted with furniture and decor from Abraham & Straus, a popular Brooklyn department store. For Dreier, the notion of integrating modern art into domestic space was essential for not only supporting artistic production, but also advancing American society as a whole. She wrote: “Unless we, as a nation, value art, we will not live. Unless we, as individuals, live with art, we cannot understand it.”

“A Time Capsule” of Modernism
In 1941, the Société gave the majority of its inimitable collection to the Yale University Art Gallery. Following Dreier’s death in 1952, that original gift was augmented by a donation of works from her personal estate. The final tally of the cumulative gift is more than one thousand artworks by 180 artists, including such masters as Constantin Brancusi, El Lissitzky, Piet Mondrian, Kazimir Malevich, Paul Klee, Kurt Schwitters, and Marthe Donas, as well as lesser-known artists who made important contributions to the modernist movement. Curator Jennifer R. Gross describes it as “a time capsule of modern art practice from 1920 to 1950, unmediated by traditional art historical and curatorial analysis.”

Indeed, as America’s first self-proclaimed “experimental museum” for modern art, the Société acted to preserve a wide range of cultural production in order to capture the totality of its contemporary moment. According to Dreier, the collection “represents real achievement of great and small talent—fearless and joyous artists who wanted to give expression to the birth of a new era we are entering. It is not, therefore, a collection of only high achievement based on the judgment of the period in which we live, which most collections are, but a living historical expression…”

Uneasy Histories
The Société Anonyme collection is an invaluable resource for students and scholars of modern art precisely because it was assembled with no regard for such labels as “good” or “bad.” Such aesthetic categories evolve over time, reflecting shifting tastes as well as the social and economic pressures embodied by the art market and art criticism. As reflected in its name, the Société Anonyme refused to define itself through the figure of an individual artist, emphasizing instead the role of the collective effort, of exchange and collaboration. Considering the collection as a whole reframes the history of modernism as a cacophony of voices that do not cohere into a singular narrative. As Dreier wrote, “it is ‘the many’ who create a movement—not the isolated leaders.”

Dreier in Perspective
As a historical figure, Dreier herself deserves closer scrutiny. She was a prolific painter and was actively involved in such progressive causes as the labor and suffragist movements. Her practice as an educator, who insisted on challenging the public with difficult art, needs further examination to reveal its lasting influence on subsequent generations of artists and critics. However, there are also darker sides to her story. Although she supported a number of European artists fleeing the Nazi regime during WWII, in the 1930s, she went to hear Hitler speak on at least three different occasions while traveling in Germany. A number of motivations might explain her fascination with Nazism, including an almost ethnographic interest in contemporary Germany and its political life. However, in our current moment of historical reckoning, such actions on the part of a fundamental player in the creation of American modernism must be acknowledged and require further investigation.

The French City of Céret, Capital of Modern Art
Not to be missed
Analyses