Closed since 2011, the KMSKA reopened its doors in late September. An audacious display in a delicate extension has turned the exhibition into a museographic challenge. 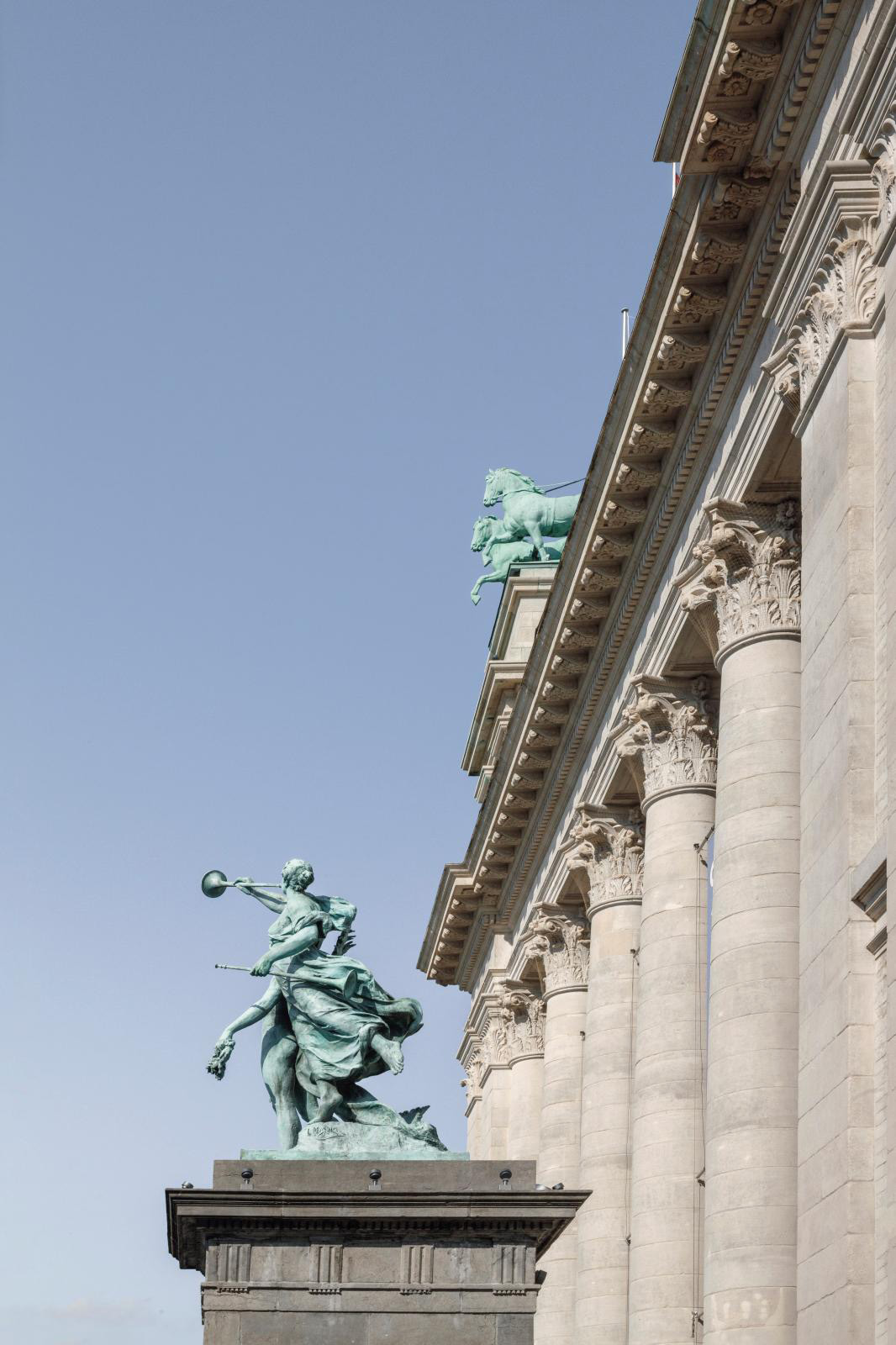 Expectations were commensurate with the importance of the collection. 8,400 works, mainly representing the art of the Southern Netherlands from the 14th to the 19th centuries in the largest art museum in Flanders, had been long awaited for eleven years. After an intervention in the building for a budget of €100 million, to which was added a hidden sum for the scenography and the restoration of two hundred works, the Royal Museum of Fine Arts Antwerp (KMSKA) is now back in top form. An iconic building in Het Zuid in the south of the city, it has benefited from asbestos removal and the restoration of the original appearance of an architecture that looks like a temple of art. Thanks to the construction of new basement storerooms, the original exhibition has been restored with a museography that honors the historical aspects of a building that opened in 1890: oak woodwork, olive green or Pompeian red picture rails, and zenithal glass windows. Dikkie Scipio, from the Dutch agency KAAN Architecten, has also designed a very discreet and sophisticated extension. Increasing the permanent exhibition by 40%, his intervention lies within the four initial patios, thus increasing the surface area of the site to 226,042 square feet for a 1.2-mile exhibition.

The overall architecture guided the display. The 19th-century sections of the building are reserved for the Old Masters and those that have been added, in the style of a gleaming white cube for the avant-garde. At the crossroads, artist James Ensor, the largest collection of his works in the world, has a dedicated wing. The transition between the two styles is provided by a breathtaking staircase, which plunges from the top to the second floor: it leads to small midnight-blue galleries, like so many pauses, which are devoted to graphic arts, small sculptures and the collection of the native artist Michel Seuphor (who died in 1999).

While the renovation of the premises is similar to so many others, nothing is less true regarding the styles of the presentation. "Poetic", the title of the galleries is the first element to break away from a traditional scenography. "Profusion", "Lessons of life", "Horizons"... Each one calls out in order to better offset our gaze and introduce an exclusively thematic and atemporal display, which assumes the telescoping. The daring confrontations between historical collections and contemporary art - exhibited exclusively through loans - are the hallmark of the institution. Thus, the "profusions" bring together the still lifes of Frans Snyders, Jan Davidsz de Heem and James Ensor around the notions of wealth and materialism. More iconographic, the "Crucifixion" section focuses on the representation of suffering around a beautiful comparison between Albrecht Bouts' Man of Sorrows from the 15th century, James Ensor's painting from the end of the 19th century and the same subject treated in video by Bill Viola. Bringing together some fifteen Flemish and Dutch bourgeois, the "portrait" section invites us to examine the choices of clothing, posture, design and accessories, which echo the codes of selfies. In the same vein, the texts in the galleries turn their backs on flat iconographic descriptions in favor of visual teasers with historical, religious, technical and moral insights: the tone is lively and the addresses to visitors are legion.

Like any original attempt, the undertaking to deconstruct a traditional discourse also has its flaws. Alongside welcome thematic associations that intelligently guide the viewer's gaze - such as landscape and emotions or paradise and music - other choices stand out for their confusion. The gallery entitled "Lesson of life", while failing to emphasize the educational - not to say moralizing - role of art, makes obvious the jumble of a display that mixes without further explanation a market scene, a Venus by Rubens, a figure of Charity by Cranach, a Saint Jerome and a Judith. The section on the representation of power brings together without transition imperial busts by Artus Quellinus, a figure from Rodin's Burghers of Calais, Jean Clouet's portrait of the Dauphin, and a painting of the kings of Egypt by Basquiat. "It was decided to follow a thematic exhibition for several reasons," explained Carmen Willems, director of the institution who joined the project in 2017, after the approval of the architectural design, with the display still to be conceived. This cross-disciplinary approach allows for better storytelling, raises questions for visitors, and invites them to think in a more playful and creative way. In a word, it gives a more refreshing message".

The Moderns in Turmoil
"Playful" and "refreshing" are indeed appropriate terms for the ancient art exhibition, which retains its overall coherence and provides beautiful highlights, such as the musical moment offered in front of the Virgin and Child by Jean Fouquet. On the other hand, the atmosphere is freezing in the modern collections, which are located in the contemporary areas of the building. Here, the presentation is like a shaker. Strongly rooted in the Belgian schools, the collection, without being exhaustive, remains attractive, with beautiful signatures ranging from Kees Van Dongen to Theo Van Rysselberghe, from Permeke to Magritte, from Modigliani to Lipchitz, and including Rik Wouters, for whom the museum houses one of the most important collections. Unfortunately, quality works are made invisible by a style that is neither historically, aesthetically, stylistically nor thematically coherent. Three clichés structure this exhibition: light, form and color. Lucio Fontana is thus joined to Hans Hartung in a discourse on form, when gesture would have been a more insightful element. A small Fra Angelico is lost in dialogue with the futuristic work of a Jozef Peeters. "Before the nineteenth century, art was exclusively iconographic when interest in form, color and light appeared among modern artists. This observation guided the choice of themes," explained Nico Van Hout, head of the collections, in an ellipsis of some developments in art history, such as the dispute over color between the Rubenists and the Poussinists or the aesthetic division between atmospheric perspectives in the northern schools and linear perspectives in Italy.

In spite of these approximations, the undertaking to renew museum discourse, which has been underway for several years, is taking on an unprecedented scope in Antwerp, revealing the efforts made to open up to other messages and to break away from habit. Following the example of the Palais des Beaux-Arts in Lille, a panel of one hundred people, who are representative of the museum's public, followed and tested the mediation proposals for the permanent exhibition for five years. Conceived by an ex-employee of the institution who has gone blind, "Radio Bart" is an inspiring stroll: an invitation is made to lend one's eyes to this former receptionist and tell the story of the contemplation. This reflection on the passing on of art is also found in the ten tactile works conceived by the director Christophe Coppens, which aim to challenge visitors: here, a monumental dromedary to be climbed inspired by Rubens' Adoration of the Magi, with which it dialogues, and there, an articulated hand taking up that of a Saint Jerome like a threat. More than a renovation, the KMSKA has inaugurated an experimental laboratory for mediation.

Barend van Orley and Kees Van Dongen: From Flanders to Parisian Modernity
Not to be missed
Cultural Heritage