The Roger Passeron Collection to be Sold at Drouot

Roger Passeron started out with a passion and turned it into connoisseurship. The first two sales of his large, emblematic collection span the history of printmaking from Dürer to Masson. 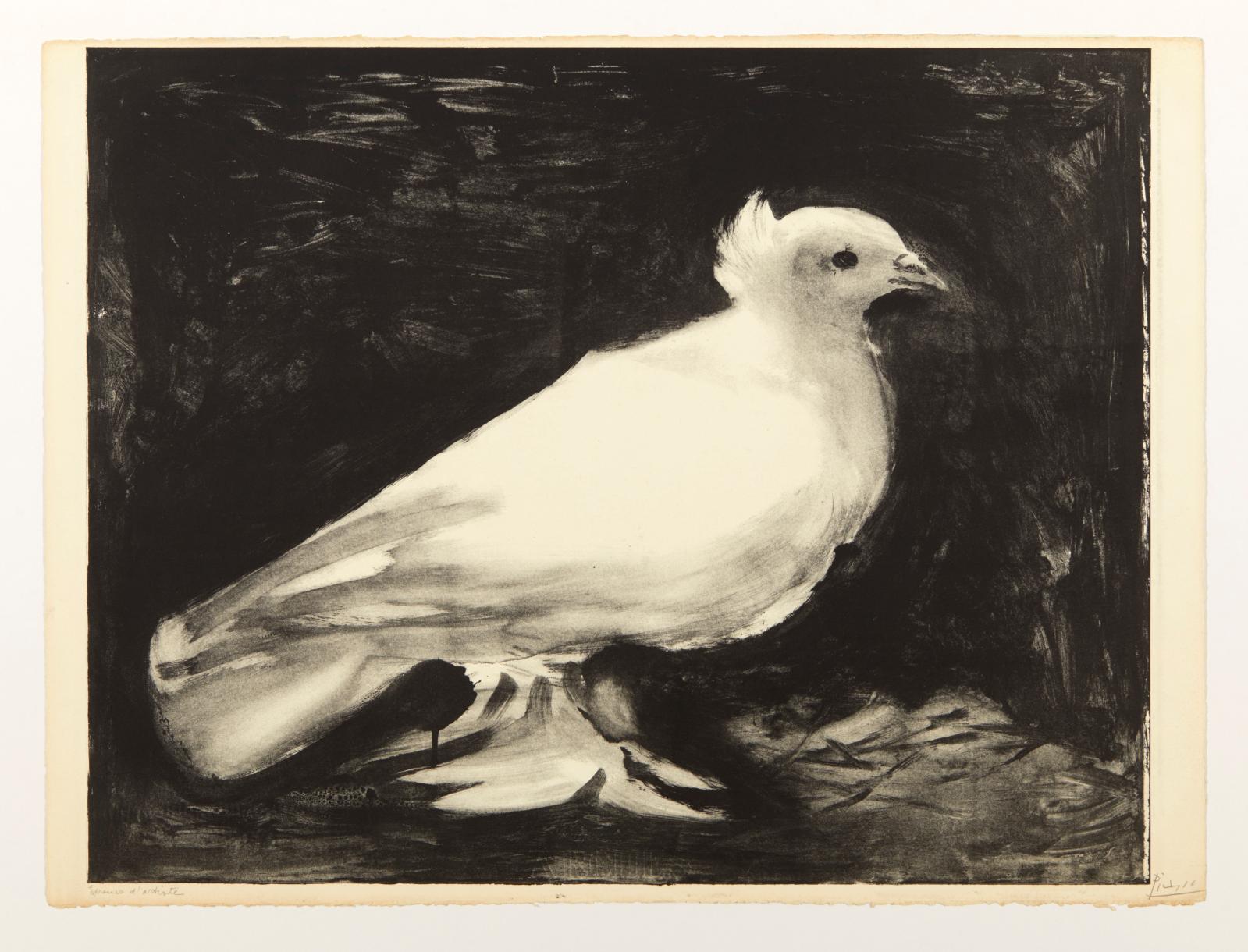 Auctions of prints and engravings are often held at Drouot—a temple for those techniques—but the December 17 and 18 sale will likely go down in the annals on at least two counts, starting with its size and scope: 530 works from Dürer to Picasso, Miró, Matta, Gorky, Dufy and Dix. Second, there is the collector’s personality. The least one can say about Roger Passeron is that he was passionate. A few days before his recent death, the 100-year-old asked his children to buy a zincograph by Henri Michaux. “He was thinking of writing a book about calligrams and engraving that would have included works by André Masson, Max Ernst and Henri Michaux,” his children wrote in the auction catalog. One might say that Passeron was born into the profession: his father, Alfred, was a print dealer on rue de Seine in Paris. Yet at first, instead of going into the family business, he went to engineering school and became head of the Air-équipement plant in Blois. But the genes were there—one might say he was a chip off the block—and before long he started collecting “fine prints”, haunting the Latin Quarter, dropping in on dealers such as Mazo, Prouté and of course Petiet, whose names, and sometimes Drouot’s as well, can be found on the backs of the works he bought. Passeron was a perfectionist. “He’d even buy 10 plates of the same work one after the other until finding the nicest one, with the highest contrast,” says auctioneer Rémy Le Fur, who organized the sale. “I’ve never seen that! Usually, collectors buy a print and sometimes swap it for a better copy. He was always in search of perfection.” That quest should not leave bidders indifferent. “Quality is what he cared about most,” says Antoine Cahen, the expert for the old works in the sale, who knew Passeron well as a dealer. “He acquired a great deal but wasn’t a hoarder. He wasn’t a compulsive buyer. He’d purchase his prints one at a time, discriminatingly, paying very close attention to whether they were in good condition. The pieces in this sale are nearly all flawless. He was very meticulous about looking for first proofs, because old copperplate engravings become altered over time.”

Passeron was more than just a collector. He also wrote numerous scholarly works, many of which were translated, including into Japanese, on Impressionist and 20th-century prints, Daumier, Chagall, Picasso and the artists of his time with whom he became friends, starting with André Masson but also less famous names such as Avati, Ciry, Cathelin and Bardone. He often authored their catalogs.

The Ancients and the Moderns
For Passeron, the quarrel between the Ancients and the Moderns did not exist. Despite a soft spot for artists with whom he became friends, and who often gave him their works as gifts, he refused to choose. In alphabetical order, the auction includes five works by Jacques Callot. Estimated at €1,500/2,000, lot 13 will surely cause a stir. Mr. Cahen says that this is an extremely rare case of finding the 1621 four-plate series Les Bohémiens (The Marching Gypsies) “on the same paper and with the same margin, remaining together since the 17th century.” Another highlight in a sale of many is seven “rare proofs”, the expert says, by Albrecht Dürer, including the iconic 1514 engraving Melancolia I (€18,000/20,000) and the lavish 1501 Saint Eustache surrounded by animals (€12,000/15,000). Mr. Cahen also mentions two beautiful proofs by Claude Lorrain (born Claude Gellée): the pastoral scenes Troupeau à l’abreuvoir (The Herd at the Watering Place, €1,200/1,400) and Le Bouvier (The Cowherd, €3,000/4,000). The first sale also includes eight Piranesi prints with low estimates, often under €1,000. One of the two Rembrandts depicting Jesus preaching, a 1657 etching with an impressive line, is worth more: €12,000 to 15,000.

Being very partial to the 19th century, two artists, Honoré Daumier and Pierre Bonnard, make up the lion’s share of Passeron’s collection. His father must have passed his passion for the biting caricaturist of Louis-Philippe down to him. The auction has 29 Daumier lots, including 112, Le Commerce est mort, les partis l’ont tué (Trade Is Dead, the Parties Killed It) from 1851, estimated €1,000/1,200. This is the only known copy: censured after Louis-Napoleon Bonaparte’s coup, the drawing was never printed. Bonnard enthusiasts will be interested in 15 lots, with estimates starting from €600.
The December 17 sale ends with the 20th century, which will carry on into the next day. It can be summed up in a single lot, 258, which illustrates Passeron’s many friendships with artists: a copy of his book La Gravure française au XXe siècle (Twentieth-Century French Prints, €2,500/3,000). Published in 1970, it features works by Gromaire, Chagall, Segonzac (a friend of his parents), Dalí, Clavé, Buffet, Masson, Manessier, Picasso and Matisse—a large 1924 lithograph of a nude in an armchair printed in 50 copies (€12,000/15,000). The sale includes around 30 Picasso prints, such as Faun, a 1936 aquatint estimated €25,000/30,000, and the ambiguous Étreinte (The Embrace) from 1933 (€12,000/15,000). In a more contemporary vein, Passeron was close to Antoni Clavé and owned several of his prints as well as original works, including a blue ink watercolor (€1,200/1,500) dedicated to the collector.

An outstanding set of prints by Masson

“Passeron did a lot for printmaking in general and for André Masson in particular,” says Claude Oterelo, who is in charge of the modern part of the auction and knew the collector well when he had a bookshop. Masson dominates the sale with around 100 pieces. The collection is “outstanding”, notes the expert, for it spans all the artist’s periods from surrealism to the American one, during which he had an influence on Pollock.” The group includes prints like Le Mort (Death), an illustration for the book by Bataille, but some lots are original drawings. One of the highlights is a Masson must: his 1942 pastel The Minotaur (€9,000/10,000). Another flagship lot of the Thursday session is Les Érophages by André Maurois. It includes not only the 1960 edition (145 copies) illustrated with prints by Masson, but also an album of preparatory drawings: 100 book-format plates in ink, pastel and pencil signed by the artist. Estimated €20,000/30,000, is one of the highlights of this noteworthy sale, which also includes many small drawings by Masson for less than €1,000.
Succession Roger Passeron - Ancient and modern prints, autograph letters and manuscripts, illustrated books
Salle 1 - Hôtel Drouot - 9, rue Drouot - 75009
Auction Art Rémy Le Fur & Associés
Info and sales conditions
Catalogue

From Marquet to Buffet: A Collection Full of Provencal Sunshine
Newsfeed
See all news
Gilbert Baker’s Original 1978 Rainbow Flag Acquired by GLBT Historical Society, California
Face Mask Affixed to Giant Buddhist Goddess in Japan to Pray for COVID-19 to End
Sculptor Sued by the Heirs of Hergé, Convicted of Forgery in Marseille, France
New Appointment at the Musée National de la Marine
Not to be missed
Spotlight
The Heart of French Cabinetmaking During the Ancien Régime…
Among the furniture in René Simeoni's collection, three top names…
Spotlight
A Beautiful Olmec Contortionist
This rare, mysterious, good-sized Olmec sculpture, one of the world’s…
Spotlight
From Marquet to Buffet: A Collection Full of Provencal…
From Charles Camoin to Albert Marquet and Bernard Buffet, the paintings…
Spotlight
Pierre-Paul Prud'hon’s Unfulfilled Dream of Love
French artist Pierre-Paul Prud'hon’s study of an unattainable love…