The Rediscovered Frescoes in the Palace of Monaco

Sixteenth-century frescoes in the Princely Palace hidden under several coats of paint are undergoing an eco-friendly restoration, which will benefit research. 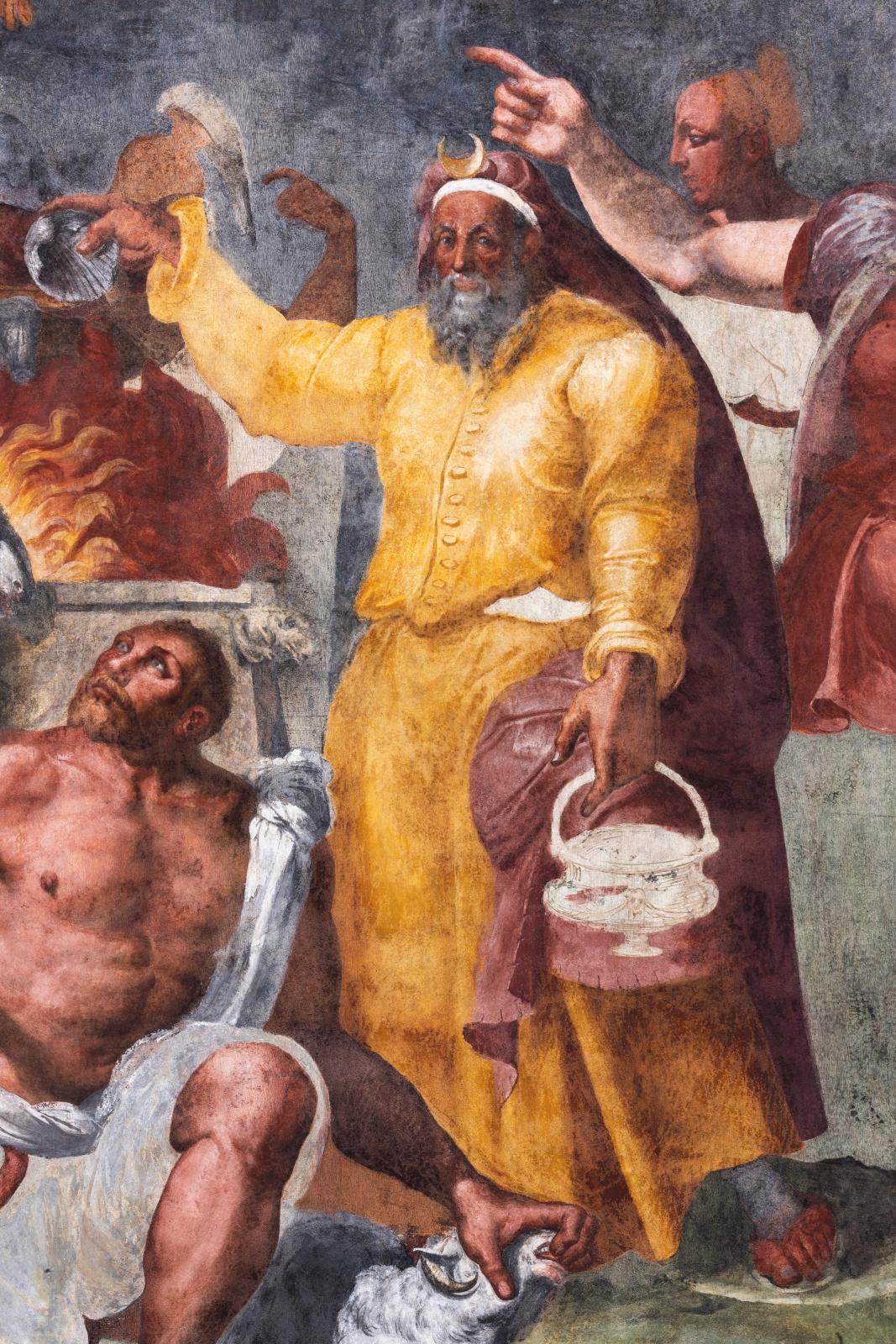 Detail from the Nekyia episode in The Odyssey on the ceiling of the Throne Room.
© Maël Voyer Gadin-Palais princier de Monaco

Detail from the Nekyia episode in The Odyssey on the ceiling of the Throne Room.
© Maël Voyer Gadin-Palais princier de Monaco

About 20 frescoes lie beneath the ceiling of the marble alcove bedchamber in the Palace of Monaco. One millimeter after the next, chisels and small scalpels reveal a presumptuous Bellerophon trying to climb Mount Olympus to get closer to the gods before Zeus throws him off his horse. A laser has just scrubbed the 16th-century fresco without altering the pigments. Then it was cleaned with cellulose pads soaked in distilled water, small gaps were filled in with watercolor and larger ones restored using the a tratteggio technique. Recommended by the Venice Charter, the method involves drawing thin vertical lines in watercolor on a restoration plaster to give an illusion of continuity from a distance while respecting the original work. The restoration, which began in 2021, is expected to last another three to four years. Visitors exploring the Grand Apartments, which have just been refurbished, cannot see the fresco yet, but it can nevertheless be glimpsed standing on tiptoes and shining a flashlight through a hole the size of a grapefruit. Another ceiling, covered with a frolicsome band of satyrs and maenads squabbling over baskets of fruit, is hidden there about 20 centimeters (7.8 inches) above the one in the room. Incredibly fresh-looking grotesques protected from light and air taunt visitors from their hiding place. Other masterpieces are now in plain sight. Since 2014, one discovery has followed another before the bedazzled eyes of everyone, starting with Prince Albert, who was always the first informed. In 2013, restorers and heritage painters were called in: the facades of the grand courtyard, decorated by three 19th-century German artists in the Nazarene movement, including Ferdinand Wagner, had been touched up many times and were crumbling in places. In the section of the palace transformed by the Grimaldi family from Genoa during the Renaissance, specialists perching on their scaffolds can see cracks caused by carbonation, characteristic of ancient frescoes, on the vaults and lunettes of the Hercules Gallery. They took samples. “Bits were scraped off with scalpels,” explains Christian Gautier, the director of the fresco conservation-restoration project. “Bright, bold, characteristic colors appeared under the varnish and paint. Analyses proved that the support is a lime-based plaster used in fresco paintings. The decision was made to find them. Since there is no DRAC (Regional Directorate of Cultural Affairs) in the principality to support us, a scientific committee including Professor Magnani from the University of Genoa, among others, was set up to draft a code of ethics.”

Mythological Scenes
It will take painters and conservator-restorers five years to bring the Hercules Gallery back to life. “We’ve found 16th-century frescoes depicting the Labors of Hercules, his birth and his death in seven of the gallery’s 13 lunettes,” says Marion Jaulin, the heritage decor painter responsible for harmonizing the restorations. “Some had rather large gaps. Medallions at the top of the vaults feature allegories representing the liberal arts, grammar, astronomy, geometry and the four cardinal virtues. We couldn’t take an archeological approach to the project by leaving gaps, because the palace has a political and diplomatic dimension. It’s impossible to have a decor with blank patches when the prince welcomes heads of state or ambassadors. So we painted the missing parts a tratteggio on very light honeycomb aluminum plates used to make airplane wings. Live models were used to reproduce the poses of Hercules. The hardest part was his fight against the Lernaean Hydra. Fortunately, researchers at the University of Genoa found a model for the Hydra’s head.” As the restorers brought the frescoes in the Hercules Gallery to light, everyone in the palace was wondering: Other treasures are hidden inside, but where? Which wall or ceiling should be surveyed? When, in 2016, an electrician drilled a hole in a corner of the Belle Époque decor in the Matignon Room, a bit of plaster came off. A green background with a small red spot appeared on one of its sides. Experts were immediately informed and launched surveys. Four years later, a saraband of grimacing half-man, half-beast figures, masks, garlands, vases and airy volutes were brought to light. It frames a medallion where Jupiter, disguised as a bull and carrying Europa, whom he had just abducted, struggles against the waves. A frieze with a red background, whose gaps have been colored in the same tone so as not to stand out, is under the ceiling of the room, renamed the Europe Chamber. All the rooms in this wing of the palace have been gone over with a fine-toothed comb. Another frieze of grotesques was found in 2016 in the green antechamber. In 2020, the original, patchy fresco, which spans the Throne Room’s 220 m2 (2152.7 sq ft) ceiling, began to appear under the paint. Its restoration is nearing completion. The theme, the Nekyia of Ulysses, is seldom represented: the hero of The Odyssey must raise the souls of the dead from their kingdom. He goes to Thebes to seek advice from the oracle Tiresias, whose eyes are extraordinary with life and malice. He has just drunk the blood of a sacrificed sheep and lamb.

Treasures by Genoese Artists
Over 300 laboratory tests and about 50 Carbon-14 dating tests were carried out. The techniques, style of figures, themes and tests tend to prove that the 600 m2 (6458.3 sq ft) of frescoes that were found is the work of Genoese artists from the latter half of the 16th century. While researchers have not yet identified them with certainty, the director of the archives, Thomas Fouilleron, found a 1547 receipt for payment by the lord of Monaco to Genoese painter Nicolosio Granello for his "high-quality work". The prince wanted “the project to be respectful of resources, techniques and people”. About 40 specialists are working on the eco-friendly restoration. “We’ve been on the site since 2015 and will be until the end of 2024, so we decided to make our own watercolors by conducting studies comparing them with the ones that are customarily used,” says Julia Greiner, the conservator-restorer heading the restoration project. “We test their aging in situ and in a laboratory aging chamber. We source the binders, gum arabic, and created our own 14-color palette based on the nearest origins, in Italy and France. We only produce the amount needed for the site.” Natural pigments are used: burnt Siena, umber, yellow ochre, Ercolano red and ivory black. The only one missing is lapis lazuli. The environmental impact of its extraction is so catastrophic that restorers prefer to use synthetic lapis.