The Pannotype: Star of the Photography Galaxy

Often confused with the ambrotype, this collodion process on fabric or leather emerged in the middle of the 19th century. However, it is still not properly identified and remains erroneously considered a rare technique. 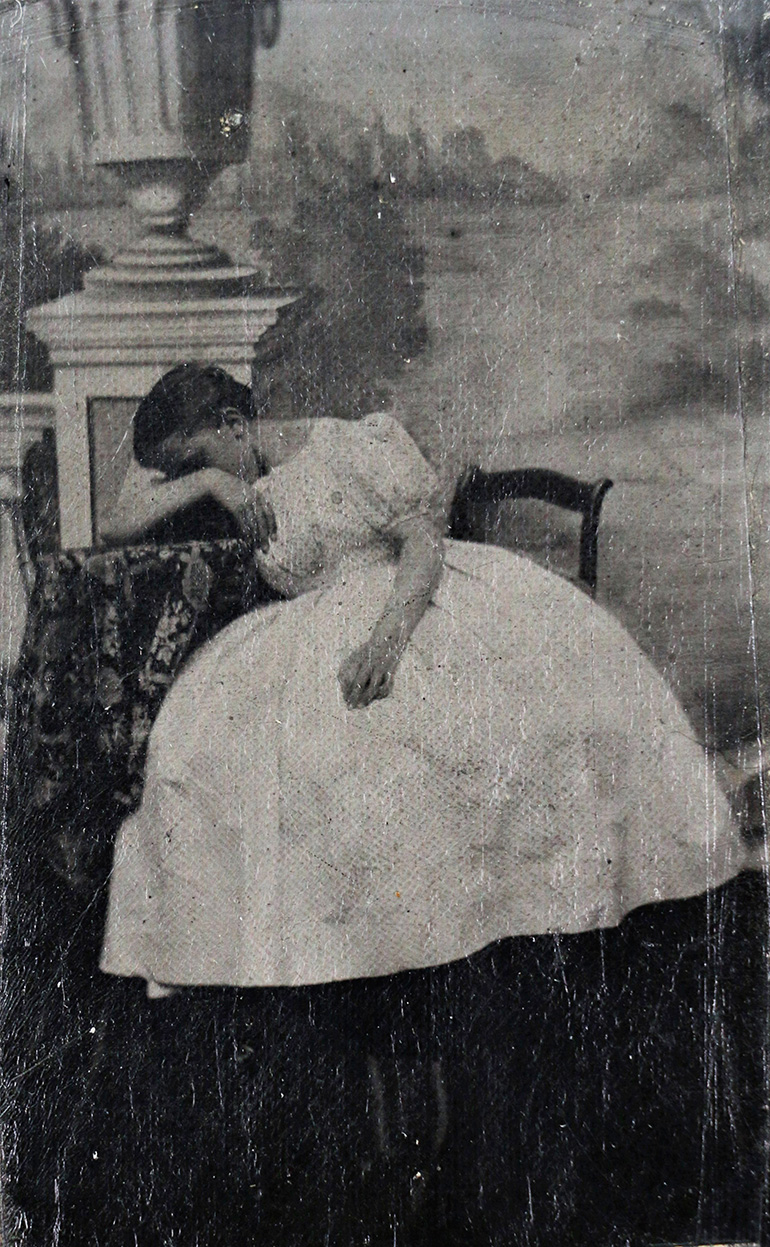 Just like a black hole, huge masses of energy converged on photography in the 19th, on every continent, with engineers, chemist and inventors experimenting and churning out treatises and patents that proved short-lived. Most of the time, these experiments left only more or less inert clusters, but they were recorded in scholarly textbooks of the time. Who knows about wothlytypy, patented by the Swiss Jacob Wothly, or photoglypy, invented by the British Walter Bentley Woodbury? Yet they were widely disseminated internationally. Apart from the daguerreotype, few early photographic processes stayed the course, like the tintype and ambrotype. The little-known pannotype also emerged. Its name is simple and confusing but is easily remembered. This process stands distinctly apart because of its textile or leather support and its traditional applications: calling cards, imitation paintings, ornamentation on medallions, snuffboxes and the like.
In technical terms, the pannotype was a wet collodion print transferred onto fabric or leather previously coated with emulsion. The image was captured in a chamber with a collodion negative on a glass plate. As with ambrotypes, the collodion was a mixture that might contain iodide, bromide, nitrate, ammonium, ether, ethanol, cellulose nitrate, iron sulphate or silver nitrate: each pannotypist had their own recipe. The printed collodion layer was then removed from the glass plate for transposition. Today, images produced in this way are often misidentified and confused with ambrotypes, whose support is made of glass. In auctions and the art market, they are often catalogued as "photographs": a vague description that has fostered the idea that they are rare, although this is not the case.

The Conflict Between the Inventor and his Distributors
Another confusion concerning the process is the attribution of its invention to Léon and Henri Wulff, owners of the company Wulff & Cie. In 1852, Jean Nicolas Truchelut (1811-1890), a pupil of Louis Daguerre who became an itinerant daguerreotypist until 1853, developed the process. Based first in Besançon, then Paris, he worked with various Paris newspapers, such as L'Illustration, Le Journal illustré and Le Figaro. He approached the Wulff brothers seeking to make improvements to his invention and a way to market it, but conflict soon arose between them. The process was never patented, though the Institut National de la Propriété Industrielle owns a pannotype by Truchelut of showing a parquet shampoo machine, registered by the equipment's manufacturer to protect it.
However, the term "pannotype" was invented by the Wulffs, who sold a ready-to-use pre-coated fabric. In 1853, this modus operandi boomed and continued to flourish until the 1880s. It was soon used across the Atlantic, with Americans preferring leather to textile as the support medium. In the US, from the 1850s onwards, travelling photographers talked of "photographs on canvas" as well as pannotypes. In 1859, the German photographer Carl August Weiske published a manual of "pannotypy", while in France studio photographers readily resorted to the term "toile cirée" or oilcloth.

Collected by a Handful of Museums
Various textiles were used at the time: cotton, linen, silk and occasionally felt. The pannotype was used for framed portraits, like the daguerreotypes, and incorporated into medallions. It was also employed for larger artistic formats, images of architecture or outdoor scenes. To make coloured versions, which are rather rare, pigments were dissolved in the components used to produce the image. A few institutions possess some of these, like the George Eastman House in Rochester (US), which in 1939 acquired a small collection of photographs belonging to the photographer and collector Gabriel Cromer (1873-1934), and the Musée Français de la Photographie in Bièvres, which holds several dozen pieces. Apart from Truchelut, the process is associated with Jean-Baptiste Lagriffe, Carl August Weiske, Carol Szathmari, George Robinson Fardon and Hamilton Lanphere Smith.
Today, two collectors in particular are on the look-out for them: Michel Rummel and Christophe Dubois-Rubio. The latter, based in Paris, is preparing a monograph on the subject and recently published an article in which he says, "As a rough guide, an unsigned pannotype sells for €20 to €50 for a calling card format. The value of a half- or full-plate, whether or not framed, varies between €100 and €250. If the artist is known, the value depends on the price index of the photographer or the person in the picture, but won't exceed €500. Some pannotypes have sold for between €1,000 and €5,000, but rarely more, for more uncommon subjects like self-portraits, portraits of celebrities, post-mortem photographs or unusual shots; however, these prices are due to the subject matter, not the process."
Research and the increasing number of collections based on early photography techniques have brought one aspect to light. In a world where art is a subject of speculation, companies and the market together stimulate the emergence of niches focused on very short-lived works, with two perverse effects: a confused idea of quality, and disastrous commercial inflation. So research on the pannotype calls for reflection in two respects: how does a neglected medium become essential, a subject of knowledge? Shouldn't abandoned processes in this field involve a more exploratory, interdisciplinary approach? In comparing the pannotype clearly with other unexploited processes, we could perhaps sound out the astonishing trajectory of the photographic galaxy more effectively.

Focus on Nadar and Alphonse-Eugène Hubert in the Lepage Collection

A Lesson in Photography by Specialist Michel Poivert
Newsfeed
See all news
Paris: Open House at the Père Lachaise Workshops
Preemption: Romanelli's "Justice" Is Heading the Musée du Grand Siècle
A Diamond Cross Pendant Fetches €673,100 at Drouot
London: Will the "Portrait of Omai" Enter the Collection of the National Portrait Gallery?
Not to be missed
Analyses