The painter takes us on his discovery of South India, with a privileged visit to the temple in Madurai and an unforgettable encounter with its sacred elephants. 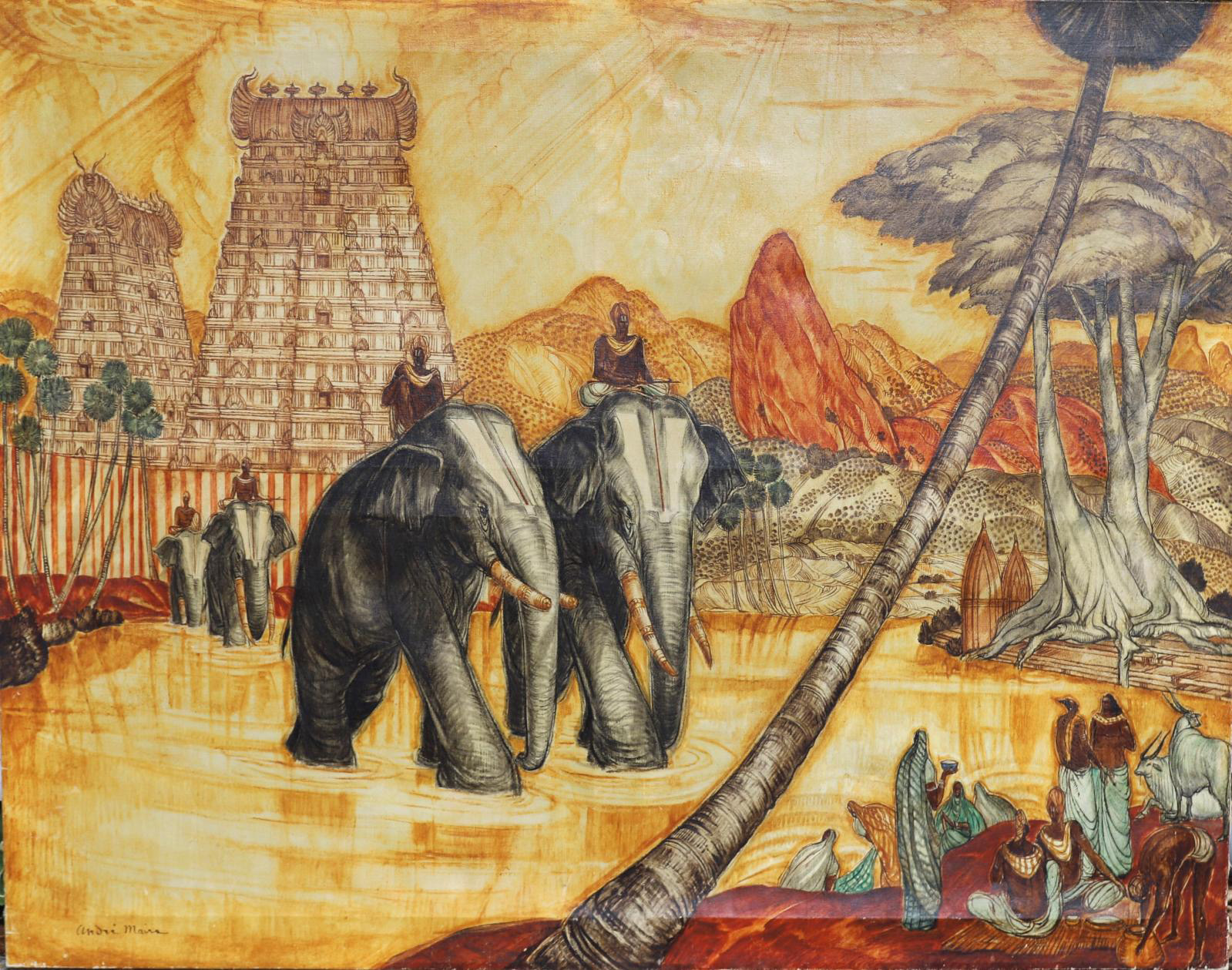 The monumentality of the sacred elephants is matched by the majestic towers of the entrance doors in the Meenakshi temple, in Madurai. Painted after his trip to India in 1938, this composition confirms André Maire's predilection for large, powerfully constructed, decorative panoramic scenes. Architecture, animals and landscape mingle to create an eminently ornamental work typical of the pieces that blended so harmoniously with the Art Deco interiors of the period. It reminds us that the painter started out in a company that produced theater sets and panoramas. But throughout his career, he also pursued an authentic humanistic quest in Spain, Africa and Madagascar, discovering people and their cultures in his representations of the "arch-shaped vault standing on the piers of a bridge, connecting people"—an apposite architectural metaphor according to Emmanuel Bréon in his book on the artist (published by Somogy, 2000).

India was central to Maire's fifth major journey: a somewhat uncommon destination at a time when artists were flocking to Africa. This stay, which the painter had long dreamed of, was made possible through his encounter with a patron, the Comtesse de Jumilhac, during an exhibition at the Charpentier Gallery. Maire reached Pondicherry in June 1938, and began months of travel and exploration from the Dravidian temples in the south to the Indo-Muslim monuments in the north.

A Unique Technique and Atmosphere
The traveling painter discovered his calling during his military service in the colonial infantry, in 1919, which took him to what was then Indochina where contemplating the ruins at Angkor confirmed his fascination with mystical places. The decisive turning point for his art came about in 1928 in Andalusia, where Maire developed his own particular style: an oil technique inspired by sepias, accompanied by strong, precise black drawing strokes standing out against a brown monochrome background that became orangey in India. This work halfway between drawing and color paid tribute to both the comic strip and his master Emile Bernard (1868-1941), who introduced him to sepia and India ink, as well as the Venetian vedutists he particularly admired.

In Madurai, Maire produced several large compositions using this technique. Though highly committed to the realistic representation of ancestral architecture, he varied his compositions, deliberately placing the site in natural surroundings when it was actually in the middle of the city, sometimes retaining one tower, sometimes the other. But the elephants always remained, the sublime subjects of his creations in Asia, for their imposing physique and powerful symbolism truly spoke to the painter. Pachyderms are often evoked in the local arts in their wisdom and intelligence. While considered divine creatures, they also participated in everyday life, collaborating with people in their daily work. Clearly, the giant animal was a noble companion for both man and painter.

Newsfeed
See all news
Paris: Open House at the Père Lachaise Workshops
Preemption: Romanelli's "Justice" Is Heading the Musée du Grand Siècle
A Diamond Cross Pendant Fetches €673,100 at Drouot
London: Will the "Portrait of Omai" Enter the Collection of the National Portrait Gallery?
Not to be missed
Pre-sale