The Old Harbor of Marseille in Kisling’s Colors

Time stands still in this painting, undoubtedly the first in a series Kisling devoted to Marseille, a city he loved. Featuring an unusual composition, it is likely to create quite a stir among his admirers. 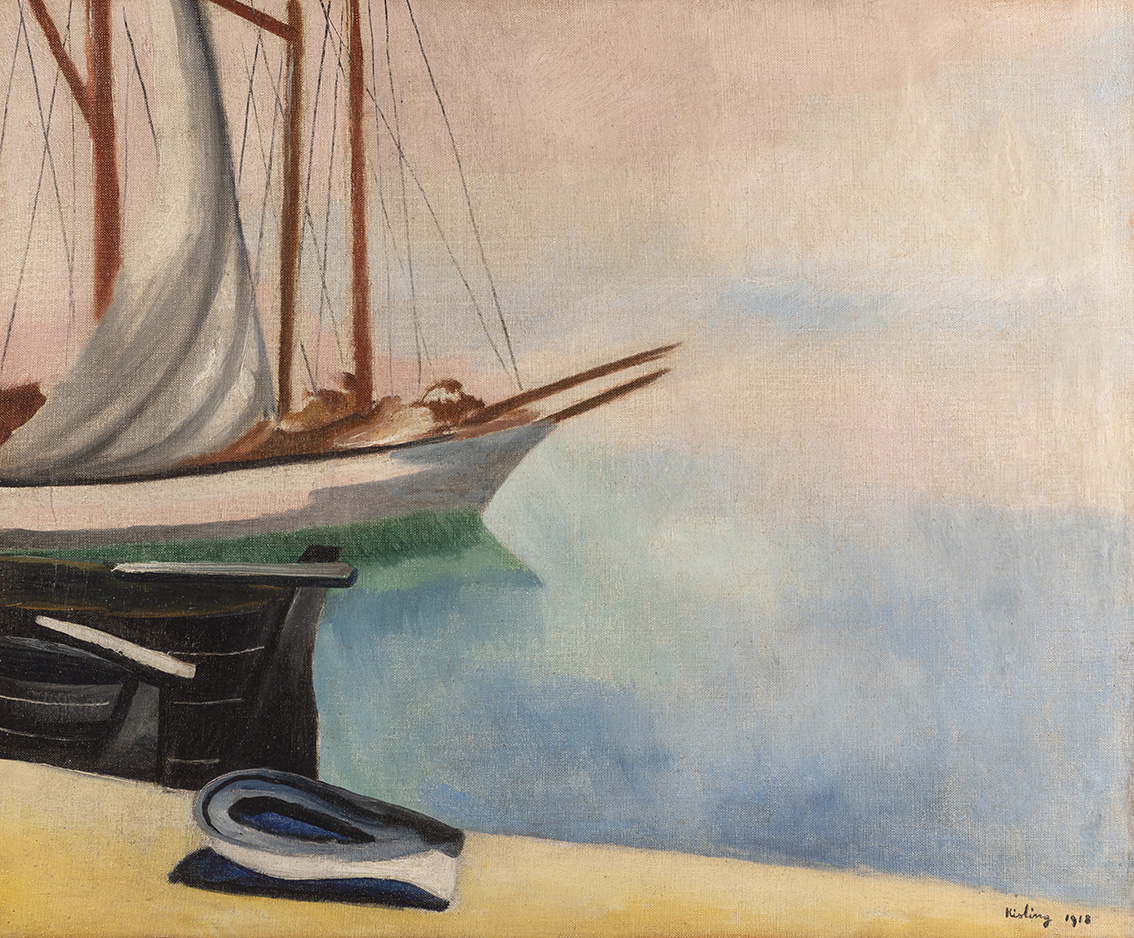 In front of a milky horizon where sky and water seem to meet in the same colored mist, Moïse Kisling painted three boats that recall the traditional livelihood of men living along the Mediterranean coast: fishing. They are a local type called "pointu", or pointed. The largest, in the background, has a lateen sail, while those in the foreground, whose rudimentary helm can be made out, actually look bigger. Based on an ancient archetype, this vessel allowed dozens of generations of fishermen to feed their families. This is the one Kisling painted in 1918, moored in the old harbor of Marseille. He added a small rowboat, lying on the quay like a strange seashell, to balance out the very spare composition. The quiet landscape belongs to an important group of paintings Kisling made of this part of Marseille from the late 1910s until his death in 1953. He seems to have always been fascinated by the hulls and masts bobbing up and down in the famous harbor, with tall façades, now gone, and the steeple of the Accoules church overlooking them. Less well known than his elegant portraits and still-life paintings with saturated colors, these lively views attest to his stylization of forms and particular perception of reality.

Kisling and the South: A Love Story
This is another side of Kisling, one of the flamboyant figures of the 1920s and 1930s bohemian and fashionable Montparnasse, in Paris. The painter discovered his passion for Provence very early on. It all began in 1910 when he left his native Krakow in Poland for Paris and became acquainted with other foreign artists there, including Pablo Picasso, Juan Gris and Max Jacob. In 1914 he enlisted in the French Foreign Legion; a year later, he was wounded and returned to Paris before receiving an honorable discharge. Later, he was granted French citizenship in recognition of his valor. While convalescing he visited Southeastern France, with which he remained enamored for the rest of his life because of its superb quality of life. In 1917 he started spending time in Marseille and the area around Toulon on a regular basis, painting some of the works that were key to the development of his style, such as Saint-Tropez, a lavish still life opening out onto lush garden (private collection). It was here that Kisling reached the peak of his formal maturity. By 1919, after a show at the Paris gallery Druet that drew much notice, he had achieved success at last. Now lionized, he had exhibitions in Paris and abroad. But Kisling did not forget the South. In 1937 he had a villa designed by his wife, La Baie, built in Sanary, in the Var. The whole family moved there. After his forced exile in the United States during the Second World War, this is where he returned in August 1946. He died there on April 29, 1953, just after his last exhibition at Cagnes-sur-Mer.

Monet-Mitchell at the Fondation Louis Vuitton, Paris
Newsfeed
See all news
San Francisco: New Bernice Bing Exhibition
Art Basel Miami is Shaping Up to Be a Memorable Edition
Mexico: Dealer Mariane Ibrahim to Open Gallery
Auction: Marilyn Monroe Is Once Again in the Spotlight
Not to be missed
Spotlight