The former Munch Museum in Oslo gets a makeover, moving into a brand-new building with a stage design worthy of Norway’s iconic artist. 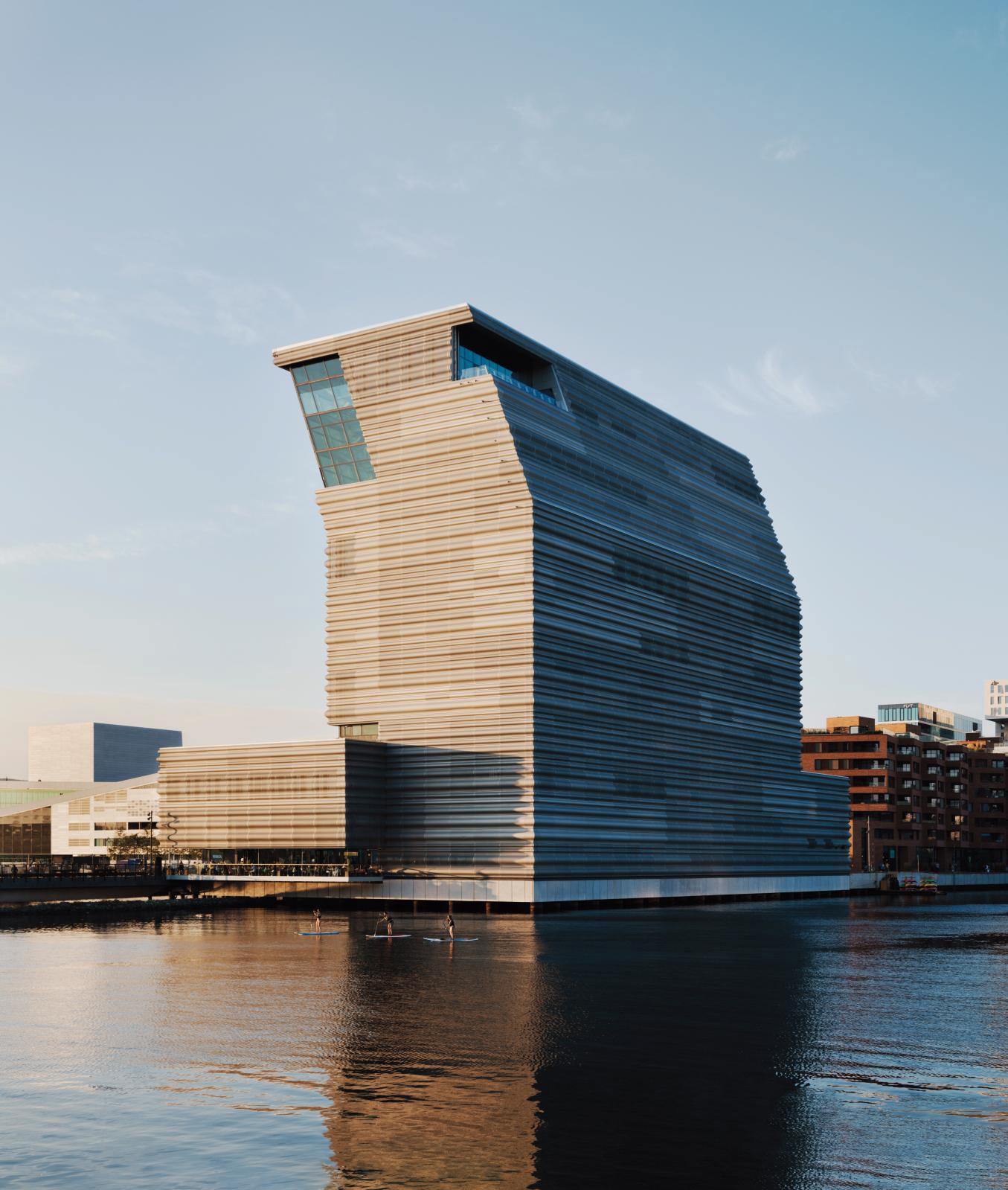 Located until 2020 outside central Oslo in the working-class district of Tøyen, the original Munch Museum had unquestionably become too small and no longer guaranteed the safety of its collection. In 1940, four years before his death, Edvard Munch wrote a will bequeathing his entire estate to the city. (His post-mortem inventory included some 27,000 items: 1,200 paintings, 7,000 drawings, 18,000 prints, six sculptures, thousands of books, copious correspondence, manuscripts, photographs, lithograph stones, copper plates and engraved wood blocks.) Discussions about a future museum began. Munch became involved, but the project stalled. In the end, he never saw his pet project take shape: the installation in a public space, under his supervision, of the “Frieze of Life”, a selection of major paintings he described as a “poem of life, love and death”. The City of Oslo only approved the construction of a museum in Tøyen in 1946. A competition launched seven years later was won by the Norwegian architects Gunnar Fougner and Einar Myklebust, with a sober, functional one-story building in reinforced concrete. The museum was inaugurated in May 1963 for the centenary of the painter’s birth with a selective hang and a chronological layout. As the years went by, the lack of space for temporary exhibitions became increasingly problematic. The first scandal occurred in 1988 when the painting Vampire was stolen (it was later recovered). In 1994, the buildings were largely renovated, but two other masterpieces were stolen by masked men on August 22, 2004: The Scream and Madonna. They were only recovered by the police on August 31, 2006, after new work on the security system had enabled the museum to reopen in May 2005. But the damage was done: despite the improvements to the museum, the decision was made to close it. In 2008, the city council announced that it would have to leave the Tøyen District and that an architectural design competition would be staged.

The epilogue of this final, incredible, highly publicized episode took place on October 22, 2021, when the new venue was inaugurated with a visual identity in capital letters. The “MUNCH” now occupies an entire 60-meter-high/196.8 ft tower, the "Lambda', lying in the chic Bjørvika District on the waterfront, a ten minute walk from the central train station. Designed by Estudio Herreros, the firm of Madrid-based architects Juan Herreros and Jens Richter, the 13-story building, massive as a castle keep, is almost entirely covered with sheets of corrugated recycled steel. This cladding filters and reflects the sunlight, maintaining a stable temperature inside. But what really distinguishes the museum, which has half the carbon emissions of a comparable building in volume, is its glazed top sloping towards the Opera House and a fine sand beach. At the bottom of the tower, in a reference to Munch’s childhood—marked by his mother’s death when he was five—sits a monumental 9-meter-high/ 29.5 ft sculpture, The Mother (2018), by British artist Tracey Emin. Inspired by one of the Norwegian artist’s lithographs (Omega and the Flower), the bronze, installed on site last June, shows a kneeling woman holding the invisible in her hands: in other words, the secret of life.

Want to receive news and updates about auctions?
Sign up for our newsletter
Munch in Extenso
The impression is far less poetic when you enter the building, which is five times larger than the old museum, with over 26,000 square meters/27,986 sq ft The first-floor hall is extremely cold and impersonal, and feels distinctly like an airport lounge, with counters, boutiques, stairs and elevators. However, everything is designed for visitors to spend a long and pleasant time there: the spaces for the permanent collection and temporary exhibitions (4,500 square meters/48437,6 sq ft  in all) are spread out in a clear and legible way over seven floors, and provide eleven thematic layout. The 42,000 works in the museum’s collection come from four bequests that were made to the city by the painter Amaldus Nielsen (1838-1932) in 1933, Edvard Munch in 1940, the widow of the self-taught Ludvig O. Ravensberg (1871-1958) in 1972 and the financier Rolf Stenersen in 1994. But the chief attraction of this collection of Norwegian modern art lies in the four sections devoted to Munch. These feature key works tracing his career from Symbolism to Expressionism, daily life on his Oslo estate, Ekely, where he lived from 1916 until his death, monumental canvases like The Sun (450 x 772 cm/177.1x303.9 in) from 1910-1911, and engraved work including the superb Kiss on the Hair from 1915. The “Frieze of Life” has not been reconstructed, as the artist’s development over the years was too complex. But visitors can amuse themselves by recomposing it from one room to the next. This new presentation provides a better understanding of Munch’s focus on existential questions, at good times (In Open Air, 1891) and bad (Self-portrait in Hell, 1903). These musings on the human condition were inspired partly by the Bohemian life he lived in Oslo, and partly by Scandinavian theater at the turn of the 20th century, with Knut Hamsun, Henrik Ibsen and Bjørnstjerne Bjørnson, whose social repertoire was violent and liberating. This little-known side of the artist revealed by the new museum has the merit of freeing him from an all-too-common identification with a single work, The Scream (1893), a symbol of anguish. For we discover a peaceful, altruistic Munch during his vitalist period—under the influence of Nietzsche and Bergson—when his moods were influenced by a generous, preventive, not to say prophylactic Nature (High Summer II, 1915).


Feminine Echoes
In regards to temporary exhibitions, Stein Olav Henrichsen, the museum’s director, has clearly grasped the intellectual and artistic benefits that can be drawn from Munch’s bipolar character and unease in society, but also his “positive” psychology. For instance, the French artist Camille Henrot, winner of the Edvard Munch Art Award in 2015, decided to address our connection with the environment in “Mouth to Mouth”. Starting in October, the first edition of the Munch Triennial, “The Machine Is Us,” will emphasize the issue of intrusive technology: a major challenge today. Another exhibition will focus on the work of a Thai-born artist living in Norway, Apichaya Wanthiang, with “Some Body Else”, an installation exploring the notions of the body and identity. Munch’s shadow will loom large again in 2023, when Norwegian artist Marianne Bratteli explores the sensitive issue of family ties. The “MUNCH” is clearly looking forward to a vibrant feminine future.