La Masone—a neoclassical-style building standing in a star-shaped bamboo maze not far from Parma, Italy—is both a museum and the work of an outstanding publisher, bibliophile and collector: Franco Maria Ricci. 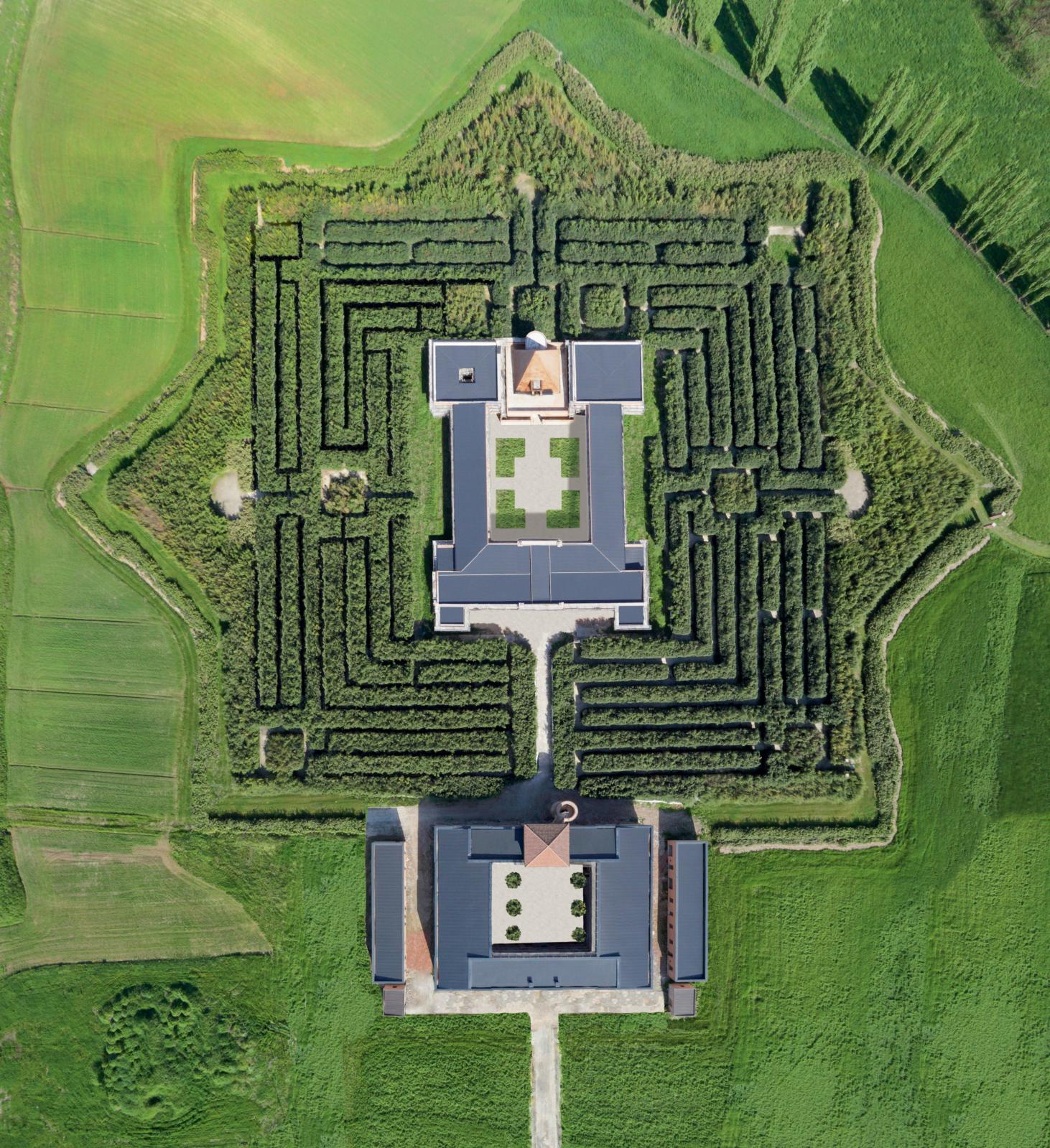 The La Masone labyrinth has a crystal-clear layout: the form of a tantric monogram, with symmetries, well-defined orthogonal axes, a chromatic contrast between the red brick and green vegetation, and open, linear perspectives—right through to the project’s ultimate purpose, which becomes apparent as you explore the site. Designed by Franco Maria Ricci (1937-2020), La Masone perfectly illustrates formal perfection in the integration of neoclassical architecture and a unique maze. Yet this manifestation of order and geometry is imbued with a somber sense of vertigo bordering on blindness, deliberately intended and envisioned by Franco Maria Ricci. The venue’s name evokes a myth involving seclusion and the lack of any points of reference: Labirinto, the palace built by Daedalus to contain the Minotaur.

The enigma of the place, simultaneously open and closed, simple yet complex, formally transparent but bearing the encrypted, almost paranoid seal of its creator in every nook and cranny, is in a way its reason for being: a way of existing that endeavors to sidestep most of the architectural formulas that come to mind. It is also a tribute to not only the neoclassical spirit, with its veneration of smoothly splendid Greek marbles, but also the dark delirium of Piranesi or the nightmare world of Füssli. La Masone is also unlike any other building dedicated to art because of its modernity. Conceived in the late 20th century, it does not feel like a royal residence or castle, or even the usual museum architecture. The only perceptible trace of authoritative power is the relative type wielded by a wealthy dandy and consummate publisher, bibliophile and art collector, who lived on the cusp of the 20th and 21st centuries.

An Aesthete’s Journey
The career of Franco Maria Ricci (1937-2020) began in an aristocratic family in Emilia-Romagna. He studied geology, then opened a design studio and discovered the work of Giambattista Bodoni, director of the printing works of the Dukes of Parma in the late 18th century. When he decided to republish Bodoni's typographic manual in the early 1960s, Ricci had no inkling of the commercial success and fame that would ensue. This commercial triumph led him to bibliophily, and the editing and publication of a unique international magazine, enabling him to work with leading writers like Jorge Luis Borges, Umberto Eco, Italo Calvino and Roland Barthes, and a network of well-known art historians including Mario Praz, André Chastel and Federico Zeri. Over the years, Ricci created the fiction of a venerable international academy. In retrospect, this path seemed to develop naturally, but it was really quite circuitous, as witnessed by the young Ricci’s switch to design after an initial career in oil exploration and alternatively his close collaboration with Borges. In addition to a literary collection overseen by the famous Argentine author, the Franco Maria Ricci publishing house offered rare, esoteric and forgotten texts, as well as books dedicated to ancient and modern artists little known to the general public.

Want to receive news and updates about auctions?
Sign up for our newsletter
The FMR magazine (Ricci's initials and a significant nod to the French language) made him famous the world over. Published in Italian, English, French and Spanish, it had a wide readership and enabled Ricci to open FMR bookstores in several cities. Both publications and the magazine had a strong, opulent identity, with their black background (even with the inner pages), carefully worked typography, use of gold and penchant for chromatic contrasts, all in a spirit of aristocratic, elitist refinement that cultivated a provocative aestheticism. Books, magazines, personal collections and cultural networks formed a single entity in a dizzying circularity mingling erudition and obsession, often running counter to trends, and resonating with a large audience.

A Magnificent, Idealized Italy
Lying some 20 km (nearly 13 miles) north of Parma, La Masone has historical links with France. The bamboo for the labyrinth, chosen both because Ricci liked it and for its rapid growth, came from Anduze, in France. The 200,000 plants form a 3 km (1.8 mile) maze in a plan inspired by Vauban's star-shaped fortified architecture. It is a remarkable feat in terms of carefully managed vegetation and horticultural expertise and, like all gardens, it is designed for leisure and entertainment. In addition, the two buildings set in their leafy surroundings are inspired by the 18th-century French architecture of Boullée and Ledoux: a peristyle topped by a pyramid stands in the heart of the labyrinth. In front of the garden, the main building houses a museum, offices and all the services required to receive the public. The typically Italian, delicate ochre of the red brick facing produces a warm light, harmonizing with the material and colors of the surrounding farmland.

The museum area is divided into three sections, containing copies of the books and magazines published by the Franco Maria Ricci company, part of the bibliophilic collection, and the art collection of some 400 works. With his distinctive tastes, especially his fondness for the macabre, the publisher was considered by some as a real prodigy. He collected vanitases, skulls and skeletons, severed heads and wax figures, saying they had the merit of reminding us how and where we will end up. But there are also conventional neoclassical marbles, with many busts, some by Bernini, Bartolini and Houdon, dancers in marble and alabaster by Mario Dante Zoi, or in chryselephantine by Demeter Chiparus, Art Deco statuettes and imposing sculptures by Adolfo Wildt, a 20th-century Milanese artist whose style seems inspired by medical anatomical figures. Halfway between modern expressionism and medieval religiosity, Wildt's tormented and lyrical aesthetic, formal originality and pain linger in the mind, and for a time acted as Ricci’s standard. His collection also includes numerous paintings: a portrait by Philippe de Champaigne, another by Ludovico Carracci, and pictures by Valentin de Boulogne, Luca Cambiaso and Girolamo Mazzola Bedoli, a close friend of Parmigianino. But though there are plenty of illustrious names, Ricci was clearly attracted to little-known works that went against the dominant aesthetics. As well as his liking for the macabre, he favored portraits and busts in highly aristocratic drapery.

This collection and its setting speak volumes about an extremely assertive taste, the desire to promote it, and a deeply modern venture dedicated to artifice, far from the trend for collectionism prevalent at the time. It also illustrates a wider, somewhat Berlusconian cultural movement that is not only literary and artistic but also affirms a certain high-profile Italianness involving cultural heritage, religion and aristocratic memories, combining them with a certain democratic lifestyle rooted in the possession of objects, and the consumption of clothing and culinary fashions like Parmesan and prosecco. As a result, La Masone dazzles with a light that is sometimes cold, sometimes warm, but never less than bold.

The Palazzo Butera: A Place of Exchange
Not to be missed
Cultural Heritage