At the court of Versailles, people needed to know how to play the game in every sense to avoid being burned by the Sun. Today, the game is played at auction… 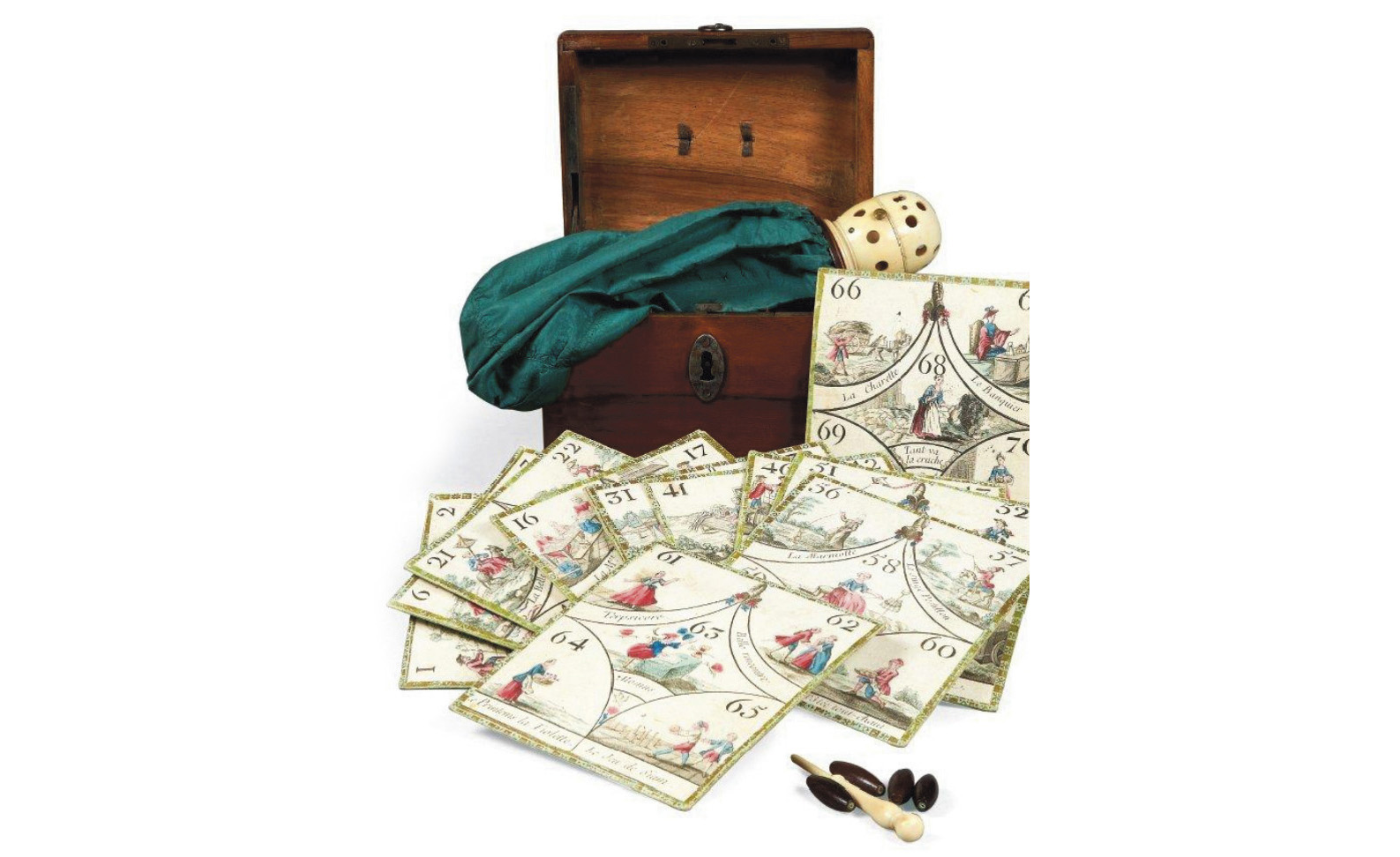 When France was a kingdom, people in high places played games—not only for fun, but also by royal decree. Louis XIV made games a meticulous ritual, having learned that to govern one must first provide amusements. In his Mémoires pour l'instruction du dauphin (Memoirs for the Instruction of the Dauphin), he explained the need to establish "this society of pleasures, which gives the people of the court an honest familiarity with the [sovereign], and touches and charms them ineffably"... The weekly rhythm permanently established in the 1690s dictated "apartment" evenings—featuring concerts, games and dancing—alternating with events devoted to the theater: a smooth-running set-up, with the Sun King as puppet-master, that subsequently continued to the end of the Ancien Régime. By then it was no longer a question of obeying, but of drowning one's sorrows.

Controlled Addiction
At Versailles, these evenings regulated by etiquette were repetitive and endless, but it was impossible to avoid them for fear of displeasing the sovereign. No one even considered it. Louis XIV, keen to keep the nobility close by his side, well away from their provincial châteaux, thus authorized them to do what he forbade his people. Throughout the kingdom, gambling dens were closed, gambling was banned by a series of restrictive royal orders, and offenders risked heavy fines and even prison—everywhere but at Versailles, where every form of gambling was allowed and even encouraged. For the king, it was not just a matter of having fun: having learned from the experience of his elders, he knew that while courtiers played, they did not plot. Moreover, when they lost large sums of money—nearly all the games involved bets, which could quickly soar—the great Louis proved a generous banker, to whom his courtiers remained forever indebted. The mechanism of the trap was well-oiled. So, at the end of the afternoon, after a bucolic stroll in the gardens, a gondola ride on the "Grand Canal" or a hunt, everyone was invited to the State apartments to take a seat at the gaming tables. The courtiers would frenetically play piquet, reversi, pharaoh, hombre and other games, none of which survived the Ancient Regime. Everyone had their preferences, not least the ladies—Madame de Sévigné (1626-1696) lamented her substantial losses. Cheating was of course highly frowned upon, and could lead to exile from the court: knowing how to lose was an essential aspect of good manners. The Duc de Saint-Simon (1675-1755), a "truthful observer" of the end of Louis XIV's reign, gives a detailed description in his Memoirs of one of these evenings: "First there was music; then tables were set up in every room, ready for all sorts of games; a lansquenet (a card game) table, where Monseigneur and Monsieur always played; a billiard table, and so on. In short, everyone was free to play with anyone they liked, and to request tables if they were all full up." This much-reprinted book often appears in the market, starting at a few hundred euros. On the other hand, first editions are extremely rare: in June 2010, with Collin du Bocage, a manuscript copy covering 1760-1770 fetched €32,000.

The Rules of the Game
The history of games dates back to the Middle Ages. Chess, checkers, court tennis, tric-trac and cards, which appeared in the 14th century, became extremely popular. With the 17th century and the changes it brought about in society, some declined while others emerged. For example, billiards superseded court tennis; Louis XIV adored it, and would spend hours playing with his courtiers in the Salon de Diane or with his private circle in the billiard room of his inner apartment. Cards and games of chance were especially popular. During the first years of Louis XV's reign, the apartment parties disappeared, and there was no longer any ordinary public gaming at Versailles. Marie Leszczyńska (1703-1768) reintroduced it in 1739, and had the Salon de la Paix fitted out accordingly. The queen was fond of playing cavagnole, and would bet considerable sums. Imported from Genoa, the game reached the court in around 1730 and was soon a huge success. Voltaire even composed a satirical quatrain on its popularity: "You would think that the game consoles/But boredom comes with measured steps/To the cavagnole table/To sit between two Majesties". A model of a silk cavagnole bag, complete with its characteristic ivory dome and colorful engraved cards, raised a fine €8,000 with Pierre Bergé & Associés in 2012. "Pharaoh", too, had its followers, notably Marie-Antoinette and the Comte d'Artois, but it was expensive and risky. Meanwhile, Louis XVI would readily abandon his locksmithing work for a quiet game of tric-trac; his account books show how restrained he was. In 1775, Vaugeois, a chessboard-maker, marketed the lottery game known as the "loto du Dauphin", which soon became a great favorite with the aristocracy and remained so after the fall of the Ancien Régime. A period set, still in its box covered with decorated paper, fetched €2,297 on November 4, 2017 with Coutau-Bégarie. These small sets are still sought-after today, but are rare in the market and even in museums. Made of thick paper and often much-handled, the cards were not designed to survive the centuries, and many have unfortunately disappeared.

At, Around and Above the Table
Playing required a specific place and appropriate furniture. A château with suites of adjoining rooms was a particularly well-suited setting. With the furniture, it was a matter of adapting to this new type of high society life. Joiners and cabinetmakers seized the opportunity to design specific furniture for these evening parties, skillfully combining the useful with the agreeable. The 18th century was decidedly a century of inventiveness. One new item was called the "chaise ponteuse"— the "gaming chair" ("ponter" meaning "to bet"). It was also called the "voyeuse" ("spectator") or "délassante" ("relaxing") chair. Poised to throw again and again, dukes and marquises sat astride or kneeled on it, leaning against a padded backrest that sometimes contained a compartment for accessories. This little chair became extremely popular. While the first models sported the curvy Louis XV style, they subsequently reflected the fashion for Neoclassicism, like the mahogany one sold for €18,415 on May 22, 2019 by Beaussant Lefèvre, stamped by one of the top names of the time: Jean Baptiste Boulard. Plainer versions regularly sell for between €1,500 and €4,000. Another piece of furniture was the tric-trac table, which met the needs of this game for two players based on medieval table games. This item qualified as cabinetwork, as it was often veneered with precious woods (kingwood and bloodwood in one sold for €6,240 on January 31, 2020 by Millon). It had a rectangular top containing the tric-trac board itself, in marquetry with a removable cover. These tables also often turn up at auction, with the same price range. To hold their coins and tokens (in gold, silver, mother-of-pearl or tortoiseshell), players used flat-bottomed drawstring purses made of velvet, the most exquisite being embroidered with silk, gold and silver thread. It was customary for the king to give these to his friends, especially on January 1st. A purse bearing the coat of arms of Marie Leszczyńska, Queen of France, garnered €4,424 in February 2017 with Coutau-Bégarie. A similar one embroidered with the arms of Marquis René Louis de Voyer de Paulmy d'Argenson (1694-1757), Secretary of State for Foreign Affairs from 1744 to 1747, fetched €4,375 with Daguerre on June 21 the same year. However, honor being where honor is due, a multicolored beaded purse with Louis XVI's monogram sold for €10,744, again with Coutau-Bégarie. And the game isn't over yet: it now consists of unearthing these pastimes of yesteryear.

Drawings for Versailles: 20 Years of Acquisitions
Not to be missed
Market Trends