These two figures, a shining couple of the French New Wave and liberated, engagé cinema, died in 2020. Their collection reflects an unconventional life full of encounters. 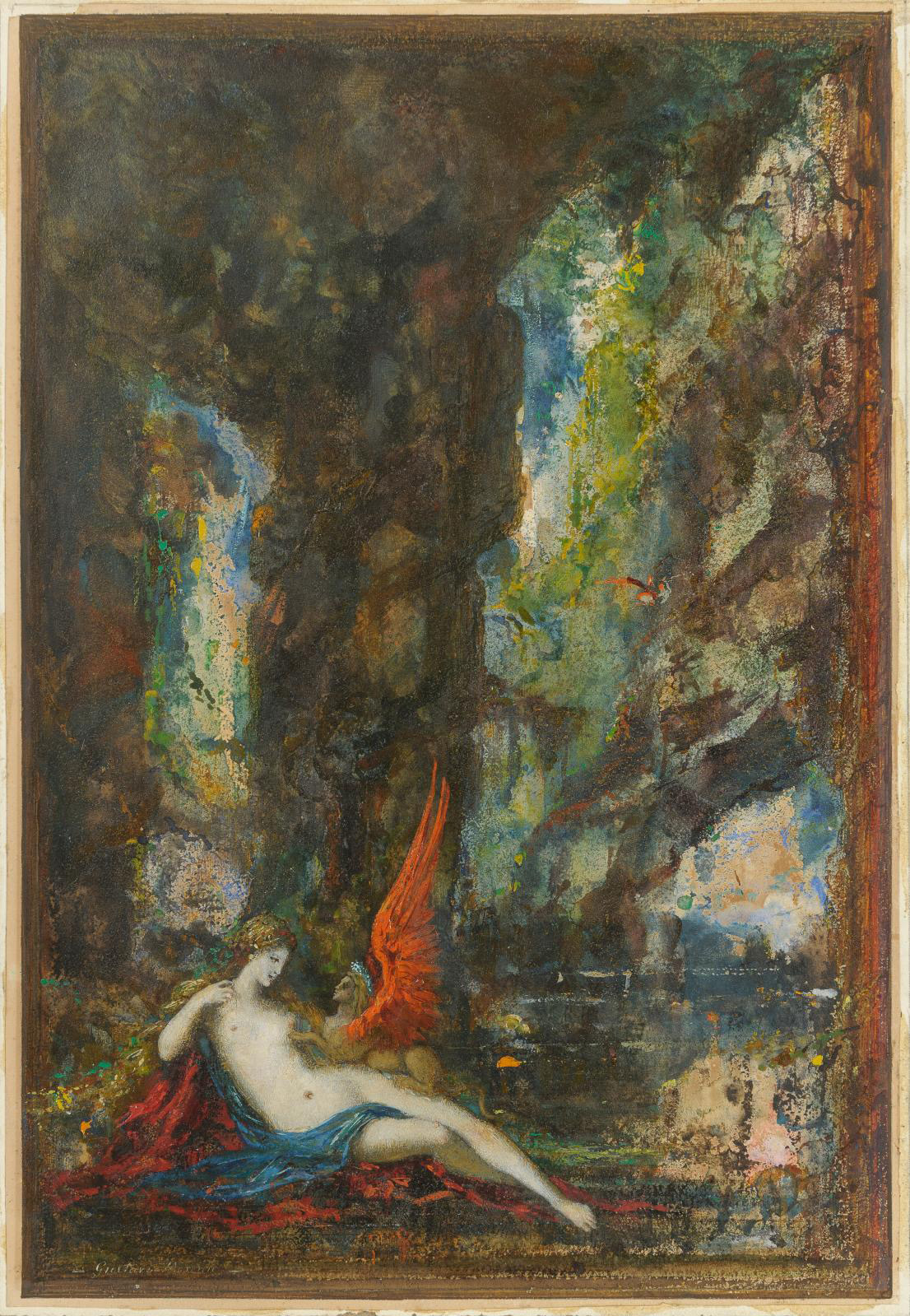 Nelly Kaplan, born in Argentina in 1931 to a Jewish family who fled the pogroms in Ukraine, defined herself as a mix of the mad spirits of South America, Europe and the Steppes. In 1964, when she met Claude Makovski, a Parisian director and screenwriter five years her junior, she had already lived in France for eleven years and was well established among Abel Gance and the Surrealists. Together, Claude and Nelly founded a company, Cythère Film, in 1967. They formed a couple both in public and behind the camera, co-producing most of their films. The creators of a quirky, libertarian cinema, they lived surrounded by poets and painters. Last year, they died a few weeks apart in Geneva, leaving a collection imbued with Surrealism, eroticism and feminism.

Lady N., the Rebel
Nicknamed "Lady N." by the writer André Pieyre de Mandiargues, Nelly Kaplan had a proud spirit that subjugated poets and artists, starting with French director Abel Gance. She discovered his films in Buenos Aires; his J'accuse inspired her vocation and probably her escape to Paris, armed with a letter of recommendation, as a freelancer for the Argentine press. In 1954, she attended a tribute to Georges Méliès at the Cinémathèque Française staged by Henri Langlois, where she met the director of Napoléon. The powerful chemistry that developed between them led to Nelly becoming Gance's assistant the same year. A black and white photo of the two colleagues (€150/200) illustrates their intense friendship. This is probably how the project for Gance's "Les orgues lumineuses" ("Light Organ"), painted in gouache by Robert Delaunay in 1913 (€8,000/12,000), came into the hands of the Kaplan-Makovskis. Both fascinated by the simultaneity of sensations, Gance and Delaunay worked together on this project for a huge screen consisting of light bulbs going on and off to the rhythm of the accompanying music, for which Delaunay came up with a woman's face composed of red, white and blue signals.

Surrealist Provocation
The female figure is central to this collection. In her youth, Claude Makovski's mother had known and posed for famous artists like Pierre Bonnard, André Derain, Maurice de Vlaminck and Jules Pascin, whom she collected with the little means at her disposal. Her name was Claudia de Maistre, and she is featured in a 1931 photograph by Man Ray (€1,000/2,000), as she was frequently present at the celebrations in the Montparnasse neighborhood. Among the 50-odd lots by Pascin, mainly drawings, aquatints and watercolors, there are several female nudes (ranging from €200 to €1,000): an obsession typical of the Surrealists, whom Kaplan met on arriving in Paris. She was fascinated by the poetry of Philippe Soupault, whom she met by chance at a Chagall exhibition at the Maeght gallery in 1954. Meanwhile, she met Breton in 1957 at a pre-Columbian art exhibition at the Musée des Arts Décoratifs. Traditional art was another passion she shared with the Surrealists: her figure of a female ancestor in wood (€25,000/30,000) from Papua New Guinea surely appealed to her for its disproportionate size (250 cm/8;2 ft).

However, Nelly Kaplan said she was "allergic to the dubious cult of the child-woman" of the Surrealists. Her own heroines tended to stir things up while remaining unmoved. Jean-Jacques Henner's The Reader was one of the provocative women (€4,000/6,000) who could have inspired the character of Marie in A Very Curious Girl, the masterpiece she co-wrote with Claude Makovski—for which Michel Landi created a color poster (€80/100). Another Kaplan-Makovski success was The Picasso Look, released in 1967 and awarded the Golden Lion for Best Short Film at the Venice Film Festival the same year. The two Spanish-speaking artists developed an unwavering friendship. Nelly took photographs of Picasso (between €30 and €100); Picasso gave Nelly a lucky charm pendant he designed with the jeweler François Hugo, great-grandson of Victor Hugo (€12,000/18,000). She always kept it.

Erotic Impulses
But long before Picasso, Nelly Kaplan told the tale of Gustave Moreau (1826-1898), accompanied by the voice of André Breton. She discovered the precursor of Symbolism in Buenos Aires while reading Huysmans' Against Nature. His dangerous, beautiful women with their desirable but unattainable bodies deeply appealed to someone who described herself as "a successful witch". Moreau, the unwitting initiator of Surrealism, was for Nelly Kaplan a "thorough madman"—not an insult, coming from her! As soon as she arrived in Paris, she made her way to Rue de La Rochefoucauld and the Gustave Moreau Museum: the "shadow lurking around his existence and his work." This was where she made a short 22-minute piece in 1961: Gustave Moreau, her first art film. The 1882 watercolor Femme dans une grotte et sphynx rouge (Woman in a Cave and Red Sphynx) (€150,000/200,000) is part of the master's cycle on Oedipus, with Freudian aspects before their time that certainly touched a chord with the Surrealists and the Kaplan-Makovskis. Eroticism was omnipresent for them: the paintings by Edouard Goerg (€1,000/2,000) and the drawing by Picabia (€4,000/6,000) depict self-confident women afraid of nothing—just like their biting, voluptuous movies.

The nudes of Pascin and Gromaire

Claude Makovski's mother, Claudia de Maistre, was a figure in the Montparnasse art scene and one of Jules Pascin's muses. Born in Bulgaria in 1885 to a wealthy family of traders who set up in Bucharest, Pascin discovered the brothels of the Romanian capital at age 16. When he moved to Paris in around 1903, he continued his dissolute life, and was nicknamed "the Prince of Montparnasse". He was described by his companions in debauchery as "an anarchist in dandy's clothing" and would have thoroughly appealed to Kaplan and Makovski. His muse and wife Hermine David, also an artist, turns up in his sketchbooks in drawings that are sometimes nostalgic, sometimes erotic, but always full of sadness. Whether in Indian ink (Hermine David Sitting in a Boudoir with a Hat, €200/400), watercolor (Hermine David Reading, €150/200) or pencil (Hermine David Drawing, €600/800), Pascin's eye records a passionate but tumultuous relationship. His rapidly-sketched nudes evoke those of another artist who also fiercely defended his independence: Marcel Gromaire, whose work combined lyricism with geometric strength. Three sketches of female nudes in Indian ink (€600/800) and Two Nudes Under the Trees in watercolor (€1,500/2,000) reflect something of the primitive inspiration that ignited Nelly Kaplan. Alongside these erotic explorations, Gromaire tried his hand at landscapes and everyday scenes in a Cubist style. Les Pêcheurs (The Fishermen, 1961: gouache, watercolor, Indian ink, €2,000/3,000) clearly evoke the friend of his youth, Fernand Léger, in the "tubist" volumes and a palette based on primary colors. A year after the retrospective devoted to him by the Musée National d'Art Moderne in 1963, Gromaire pushed geometrization to abstraction: his Collines (Hills) of 1964 (€6,000/8,000) dissolve into angles and curves beneath a sky expressed in dynamic diagonals.
SUCCESSION NELLY KAPLAN ET CLAUDE MAKOVSKI
Salle 4 - Hôtel Drouot - 9, rue Drouot - 75009
Bouvet ,
Chauviré & Courant - Enchères Pays de Loire
Info and sales conditions
Catalogue

The Pierre Maurs Collection: From India to the Fauves

The Guerlain Estate: Spotlight on Leonor Fini and Modern Sculpture

Tanguy and Royère: A Winning Duo
Newsfeed
See all news
Bonhams Opens Salesroom in Paris
Dutch Monument to Those Murdered by the Nazi Regime Opens – But Also Meets Opposition
Giant Violin Floats Down Venice’s Grand Canal
Picasso Exhibition to Finally Open in Toronto in Early October
Not to be missed
Spotlight
A Table Commemorating the Liberation of France by the…
Mystery shrouds this unique, previously unknown table made in 1947…
Spotlight
A Treasure of Gold Coins Found in Brittany
In 2019, a couple and three stonemasons found a trove of coins dating…
Spotlight
Binoche et Giquello Present a Giant Triceratops Called…
Thrusting out its emblematic skirted skull and sharp horns, this…
Spotlight
Indian Motorcycles’ Legendary Big Chief
Made for the road, Indian’s red-liveried, interwar, upscale Big…