The Jeanne Tachard Collection: The Choice of Modernity

Free-spirited, headstrong Jeanne Tachard ranks among the 1920s’ leading patrons. She commissioned works from French cabinetmaker and designer Pierre Legrain and was a pioneering collector of African art. 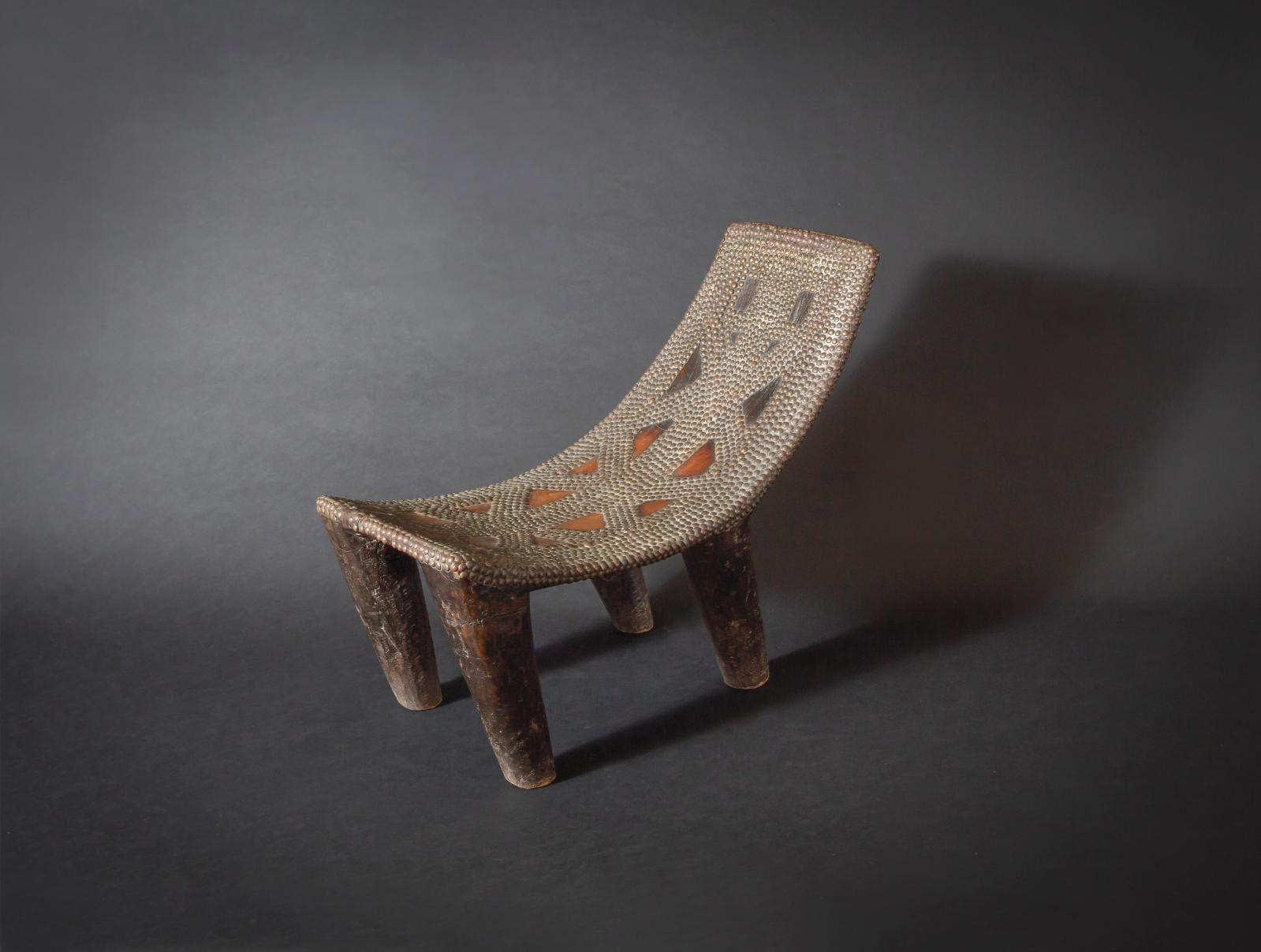 "Jeanne Tachard deserves serious research by art historians," says auctioneer Bertrand de Latour. No sale or book has ever focused entirely on this larger-than-life personality who left her mark on the first half of the 20th century. The dispersion in Montpellier of 80 lots from her collection, owned by the children of her adopted son, Bernard Segond, and her nephew Frederic Johnston, offers an opportunity to discover this unconventional woman, a fashion designer who became a patron of avant-garde artists. Like French writer Colette, a close friend, she had an outstanding career that led her to professional and social success. "She was born Jeanne Poncin in 1870 into a family of very modest means in a small Jura village, where her father was a farmworker," says Mr. Johnston. She arrived in Paris around 1900 with nothing but her golden hands and a very secure sense of taste. "Jita", as her family called her, worked in sewing shops before meeting a young engineer named André Tachard, the eldest son of a member of parliament and ambassador Albert Tachard, whom she married in 1901. His parents, wealthy Protestants from Mulhouse whose families had made a fortune in banking, opposed the union, but André was deeply in love with his wife and had confidence in her talent. In 1907, he bought her Suzanne Talbot's milliner's salon at 14 rue Royale in Paris and Jeanne soon became the greatest hat designer of her day. Gifted with incredible foresight, she rose to the level of the great designers, including her neighbor on rue de la Paix, Jacques Doucet, designing hats that matched his dresses. In a few years, they were all the rage with high-society women. She made a fortune—and entered a new world. "This was Jeanne Tachard’s revenge on her social origins and her very bourgeois in-laws, who did not accept her," says Mr. de Latour. A tragic event turned her life upside-down: her son Louis, a brilliant École Polytechnique graduate and an air force pilot, was killed in a dogfight in 1917. Jeanne commissioned artist Henri Laurens to make a sculpture of a stylized bird spreading its protective wings over his grave in the Montparnasse cemetery (€40,000/60,000, awaiting permission from Bâtiments de France). She then sold her lucrative business to her lead saleswoman, Juliette Lévy, who later commissioned Eileen Gray to design her apartment on rue de Lota.

Newness as a Sign of Modernity
After a period of grief, in the 1920s Tachard began collecting art. Surrounded by artists, she discovered the avant-garde. She mocked convention and chose newness instead of the stuffy, old-fashioned tastes of the bourgeoisie and French society, which she no longer wanted any part of. Tachard was among those who advised Doucet to part with his 18th-century collection in 1912. Her friends included Francis Picabia and Léonard Foujita, two of whose ink drawings, Jeune femme (Young Woman) and Jeune femme au bonnet (Young Woman in a bonnet), are expected to fetch €3,000/5,000 each. She also liked the eclectic world of Jean Lurçat visible in the large oil painting Homme de dos dans un paysage (Man Seen from the back in a landscape), estimated €6,000/10,000. Tachard was among the first to buy works by Max Ernst, Moïse Kisling and Brazilian artist Tarsila do Amaral, which graced the walls of her various homes, considered emblematic of an era.

Her apartment at 41 rue Émile Menier in the 16th arrondissement of Paris, where she lived until the end of her life, was her first project. Tachard had architect Paul Ruaud design the entire building and commissioned Pierre Legrain to decorate the ground floor. She introduced André Breton to Doucet, who in turn introduced her to Legrain, the bookbinder for her precious modern library since 1917. He gave full rein to his imagination in the project, which he carried out in 1920–1921 as a total work of art, designing everything from the napkin rings to the dining room’s geometrically patterned brown wool carpet (€6,000/8,000, see photo) and a conical glass and a fruit bowl with a polylobed neck in brown or blue-edged malfin glass (€150/250). Unfortunately, none of Legrain’s furniture is in the sale; it was scattered to the wind starting in 1963. In 1923–1924, the bookbinder-turned-designer went even further at the villa in La Celle-Saint-Cloud, in the Yvelines. Tachard relentlessly prodded him towards more modernity and minimalism. She even entrusted him with the garden, which he designed to look like a bookbinding with a mosaic decoration, a major first for the artist. The apartment was sparsely furnished. Animal skins lay strewn on a floor entirely sheathed in Saint-Gobain glass, the colors were vivid and contrasting, the light meticulously directed and the lines geometrized to the extreme. "An assertive choice of 20th-century radicalism turned the house into a genuine museum, but also a living place that a child could enjoy," says Mr. de Latour. The minimalist decor was a perfect setting for his furniture made of exotic woods and heterogeneous materials, but also for the paintings that Legrain sometimes framed in a way similar to bookbinding. An example is the frame he made of two pine boards, which matches the spirit of synthetic Cubism in Ángel Zárraga’s Composition cubiste à l’oiseau (Cubist Composition with Bird, €30,000/45,000, see photo).

A Pioneering African Art Collector
An extremely primitive-looking female statuette by Ossip Zadkine that once perched on a balustrade in the grand salon of the futurist villa in La Celle-Saint-Cloud is estimated €80,000/100,000 (see photo). It was surrounded by African art in a fascinating dialog between contemporary and exotic forms. Tachard was among the first African art collectors, even before 1914. She was influenced by gallery owner Jeanne Bucher and a few artists, but an unquenchable thirst for discovery was the main force that drove her. Her African art collection left a deep impression on Legrain. The Fon throne from the old kingdom of Dahomey (Benin), which was in the grand salon, its four legs symbolically holding up the sky, inspired him to design a carved ebony curule stool for the 1924 Salon des artistes décorateurs, which was bought by Doucet. Legrain also based a lacquered curved seat, also from Tachard's former collection and now in the Virginia Museum of Fine Arts in Richmond, on an Ngombe throne with four legs and an inclined studded seat from the Congo.

Asian art did not escape Tachard’s keen eye either. The sale features several lots, including a set of four Franco-Chinese red lacquered chairs for the Paris dining room (€8,000/10,000). She ordered two of Eileen Gray’s famous "Bibendum" chairs for her villas in Saint-Tropez and Sainte-Maxime and commissioned Marcel Coard to design a pair of armchairs, estimated €2,000/3,000, for the winter garden at the Villa des Vingt-pins. This was a playground for a woman of unlimited curiosity and artistic fiber.

Schiaparelli at the Musée des Arts décoratifs in Paris

The Creuzevault Collection, a Family Affair
Newsfeed
See all news
Paris: Open House at the Père Lachaise Workshops
Preemption: Romanelli's "Justice" Is Heading the Musée du Grand Siècle
A Diamond Cross Pendant Fetches €673,100 at Drouot
London: Will the "Portrait of Omai" Enter the Collection of the National Portrait Gallery?
Not to be missed
Spotlight