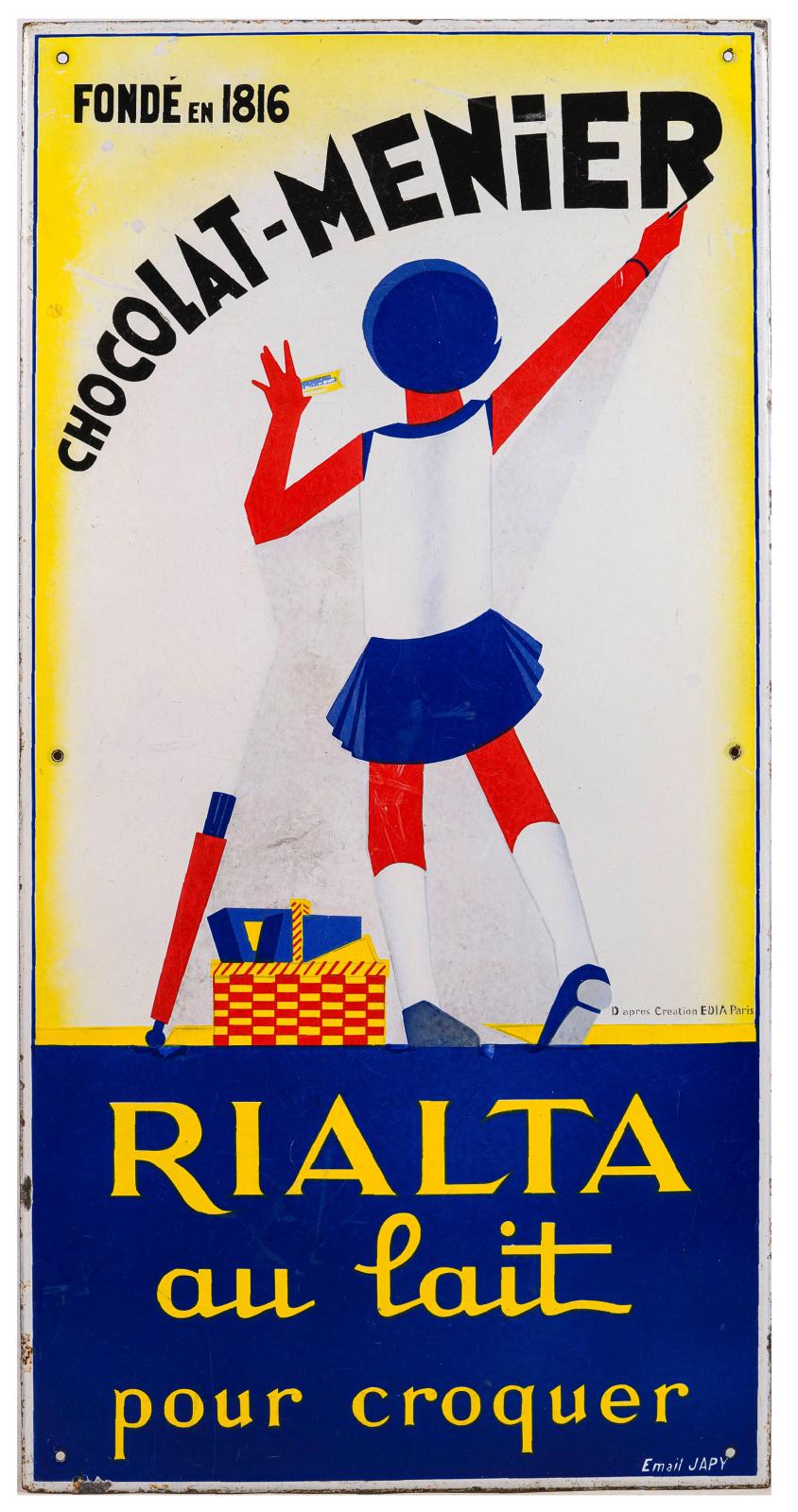 The Menier chocolate brand’s signature image has changed little since French illustrator Firmin Bouisset (1859-1925) created the famous little girl in 1892. The reason may be that she was based on his own daughter, Yvonne. The red umbrella is an allusion to a real-life incident. One day Yvonne came home from school very upset: the child’s classmates had made fun of her because her governess had come to pick her up at school with a huge red umbrella. The little girl is in a pleated skirt and camisole, looking quite mischievous and excited at seeing chocolates at her feet, scrawling the by-then famous slogan "Avoid counterfeits" on a wall. Working with Menier’s advertising department, Bouisset designed a simple but effective poster that revolutionized the industry at a time when more confusing compositions were the norm. He hit the nail on the head: childhood was an emerging theme and French Prime Minister Jules Ferry had just made secular public education free and compulsory for all youngsters. What’s more, the Menier chocolate factory in Noisiel, near Paris, had created a free school. This was the first time a character embodied a commercial product. But Menier was also aware that ads need to be continuously updated, so in the late 1920s the little girl got an art deco "makeover" based on a picture album created by the illustrator Sendraf, associating her with Walt Disney characters.

In High Demand
In 1929 a new poster came out and appeared on all of Menier’s enameled plaques: the little girl sported a short skirt, a more modern bodice and a tomboy haircut, all setting off a more stylized figure created from geometric shapes in flat colors. Designed by Edia, which was formed when the Lévy and Neurdein companies merged, this composition was based on a drawing copyrighted in Paris on September 25, 1929, by a certain "O.GUS". The name of a more famous artist, or in any case one influenced by the leading illustrators of the day—Carlu, Loupot and Cassandre—may be hiding behind that pseudonym. Produced over a shorter period of time, this updated version of the little girl is rare on the market, especially in a condition as good as the one here.
Enameled plaques first appeared during the reign of Napoleon III, especially for street names. In 1890 the advertising industry started using them on account of their durability, but they were often taken down and destroyed or recycled, so this is a rare opportunity for Menier collectors. These plaques are "highly prized,” says specialist Frédéric Dufetelle, “especially by foreigners, Belgians and Germans for example, for whom they represent a certain image of France, like Nectar, the Nicolas deliveryman, or the Laughing Cow." In June 2015 another old piece designed by Bouisset set the French record for an enameled plaque at the same Nantes auction house: €45,000. Will it be broken?

In 1864, Claude Monet painted this rare, early oil on canvas of the...

Goya as the Standard-Bearer of a "Classic" Co...

Little is known about the Parisian who built this collection, which...

A Collection of Greek Art in Normandy

A dispersal of the contents of a Norman manor house will be the first...

Waterhen has been in the same Lyon collection since the 1930s. It...