Until now, Portrait de l’artiste en chasseur (Portrait of the Artist as a Hunter) by Alexandre-François __TexteRechercheEnGrasDesportesTexteRechercheEnGras__ was deemed the first painting of its kind in the history of French art. A recent discovery by René Millet has changed that. 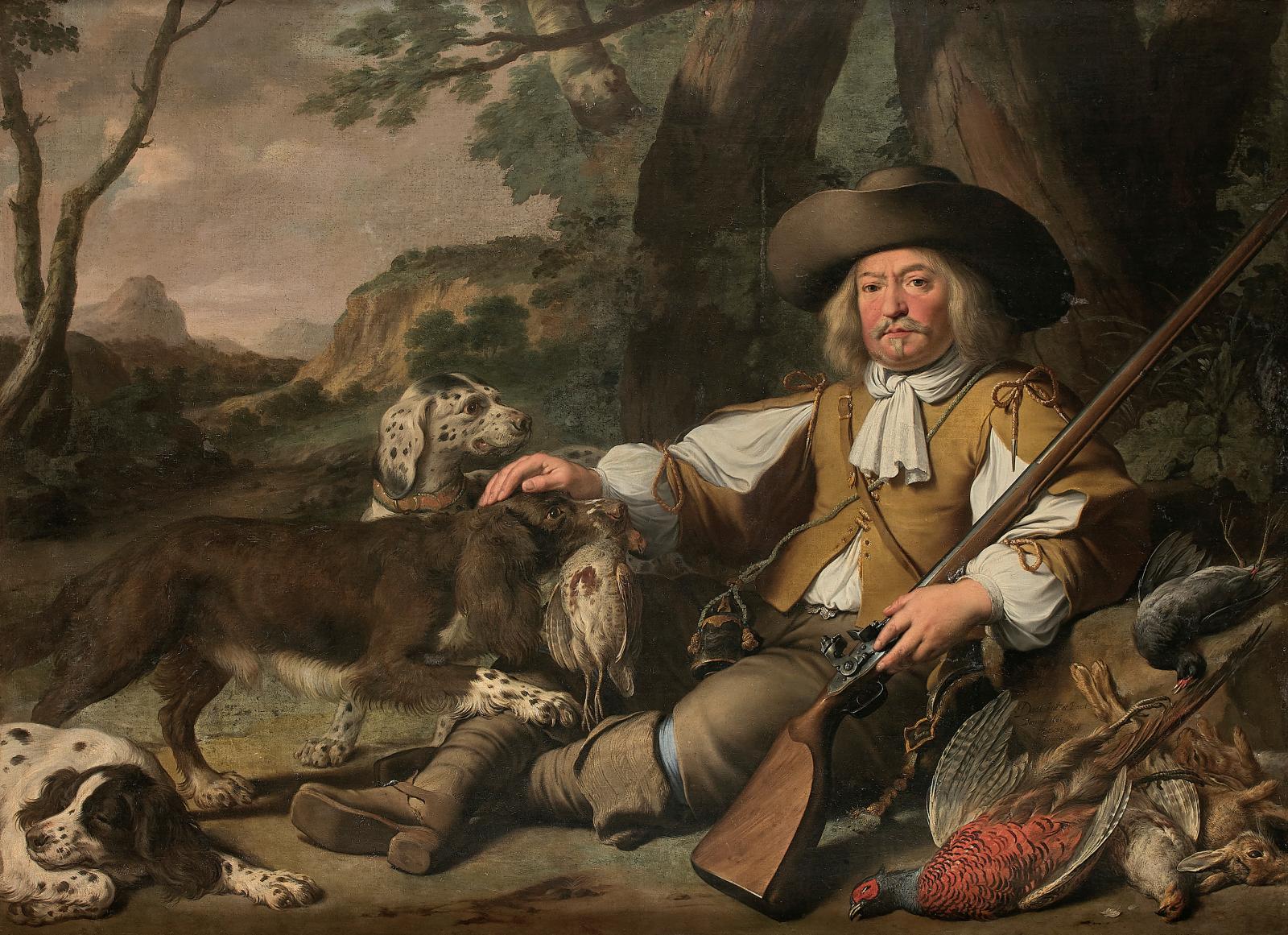 "Daret. Inue.tor. et. Pinxit/Parisys 1661./Nicasius fecit/Annimallia": more than a signature, a revelation. In 17th-century Dutch art there would have been nothing unusual about the casually seated, good-natured model fondly petting his dogs. The small, exactly contemporary Self-portrait as Hunter by Arie de Vois, in the Mauritshuis, immediately comes to mind. But here the play on words between "jagen" (to hunt) and "vogelen" (to catch birds) does not cover any gallant dimension! The work’s particularly imposing size, meaning and, especially, technique make it eminently French and show the turning point of two Flemings at the height of their powers, intent on making their mark on French minds. The "inventor", Jean Daret, and Nicasius Bernaerts, who was apparently behind the extraordinary animals, painted a portrait of a hunter in Paris 37 years before the piece that got Desportes admitted to the Académie royale de peinture et de sculpture and decades before the portraits of hunters by Santerre, Oudry, Largillière, Tournières, Lancret or Nattier.

Two Eminently French Flemings
Daret, a Fleming who settled in Aix-en-Provence during the 16th century, made his name in the churches of that city as well as Pertuis, Salon and Lambesc. The painting of Mary Magdalene bears the year 1637, allowing us to determine the date he arrived in Provence after a spell in Paris and a stay in Italy to perfect the training he received from Antoine Van Opstal in Brussels. His works are in the museums of Marseille and Aix, but especially in the latter’s hôtel de Châteaurenard. His portraits are few. The catalogue raisonné of the thesis by Jane MacAvock, who is preparing a major retrospective at the musée Granet (Aix-en-Provence) in 2024, only includes the famous 1636 Self-portrait in the Hermitage Museum, Le Joueur de guitare (The Guitar Player) at the musée Granet (same year), of which two versions exist, La Joueuse de luth (The Lute Player) at Yale, Portrait de magistrat (Portrait of a Magistrate) at the musée des Beaux-arts de Marseille (both from 1638), Portrait de Gaspart de Fabri de Fabrègues, écuyer d’Aups (Portrait of Gaspart de Fabri de Fabrègues, Equerry of Aups), stolen from the church in Aups, and works known from prints that can be counted on the fingers of one hand.
In the summer of 1659, Daret, as Ms. MacAvock shows, requested an extension of a debt repayment in order to fund a second stay in Paris. according to an 18th-century manuscript at the Arbaud Library in Aix-en-Provence, he spent three years working at the Château de Vincennes, one of the least-documented projects of Louis XIV’s reign. On September 15, 1663, "Daret, painter, having presented a portrait", was admitted to the Académie royale de peinture et de sculpture. But, says Ms. MacAvock, no trace remains of this work, nor of the others he painted in Paris, with the exception of two engravings based on lost portraits and a painting for the Saint-Mathieu chapel in the church of Saint-Paul de Vence, which is still there. Published for the first time in the catalog of the exhibition "Painting in Provence in the 17th Century" (Marseille, palais Longchamp, musée des beaux-arts, 1978), this one bears a signature: "Daret inv. Tor faciebat Parisiis 1661". Pierre Rosenberg said it marked "a shift in Daret’s painting towards brighter colors, perhaps under the influence of his fellow Frenchman Philippe de Champaigne, whose works are plentiful in the churches of Paris, and a desire to conform to the Parisian art of his time." Nothing suggests that he had any links with Flemish circles in Paris, much less with Desportes' teacher Nicasius Bernaerts, about whom Vincent Delieuvin tried to fix the damage caused by Desportes' son, who portrayed him as a dilettante, transmitting the myth that his father was self-taught to posterity. Born in Antwerp and a student of Snyders, Bernaerts was admitted to the Académie in 1660. A year later Lebrun, who painted the animal decor of the Ménagerie at Versailles, asked Bernaerts to join him in decorating Vaux. Here, he excels at painting dogs and dead game. The black bird in the foreground—perhaps a red-billed chough—and the muzzles of the two standing dogs are real showpieces of which few equivalents exist in 17th-century French painting.

The Pilon du Roi?
Specialists consulted by Mr. Millet say that the frame was probably made in Provence. The label bearing the words "Bon DU PILLE/1661/par DARET et NICASIUS BERNARD" might provide a pathway to identifying the model. It would have been logical to consider the model a relative of Jacques-André du Pillé, appointed royal tax collector in Lyon in 1684, but the Provence landscape and the impossibility of establishing a direct connection to the painting’s last known owner, writer Michel de Grosourdy de Saint-Pierre, are reasons to take that assumption with a grain of salt.
The author of these lines suggests that there is a link between the hill in the landscape’s background and this ambitious commission’s context. Anxious to crush the Provence Fronde as swiftly as possible, in January 1660 Louis XIV spent two months at the hôtel de Châteaurenard in Aix-en-Provence, whose staircase Daret had decorated. Impressed by "so much beauty", he ordered "his guards to take care not to damage anything,” wrote Pierre-Joseph de Haitze, Daret’s first biographer, in 1677. “All the wise and important people who were with him praised the painter to high heaven." The son of Pierre-Paul II Fortia de Piles, who remained faithful to Louis XIII, welcomed the young king to Marseille on March 2. When Paul III Fortia de Piles handed him the keys to the city, he reportedly said, "Hold on to them, Piles, for you keep them very well; I am giving them to you!"—and showed his gratitude by appointing him governor-judge of Marseille. Alexandre Dumas, incidentally, related one of their conversations in his Impressions de voyages (Travel Impressions) on the South of France, about the bastides (fortified farmhouses) of Marseille. But we think that the rocky monolith standing atop a ridge could well be the evocatively named Pilon du roi (“the King’s Pestle”), the top of the Étoile massif, well known to the residents of Aix. Paul III Fortia de Piles had not yet married Geneviève de Vento of Pennes, but his mother was a Covet from Marignane, both towns being located in the surrounding countryside. It would be very tempting to think that the portrait painted in Paris a year later depicts his father, Pierre-Paul II Fortia de Piles (1660-1682), governor of Berre and the islands of Marseille. Daret was in Paris in 1661 but had already started working for allies of Fortia de Piles in 1648. Returning to Provence, one of his projects was the hôtel de Covet in Marignane, his wife’s fief.
Whether this painting depicts Pillé or Fortia de Piles, it is a masterpiece of late 17th-century French portraiture that deserves to go down in art history.

A Fantastic Hunt in Moustiers
Newsfeed
See all news
Is Battersea Power Station Now a Playground for the Super Rich?
Colorado Artists Unite to Advocate for Missing and Murdered Indigenous People
Tourist Denied A With Meeting Pope Francis Smashes 2 Antique Statues
Digital Illustrator, Grzegorz Rutkowski, is Bigger Than Picasso on AI Platforms
Not to be missed
Spotlight