The Fifty Fathoms: Land Vs Sea

In its original version, Blancpain's best-seller is now a highly desirable item fiercely hunted on forums, and considered spoils of war by purists, so rarely does it come on the market. 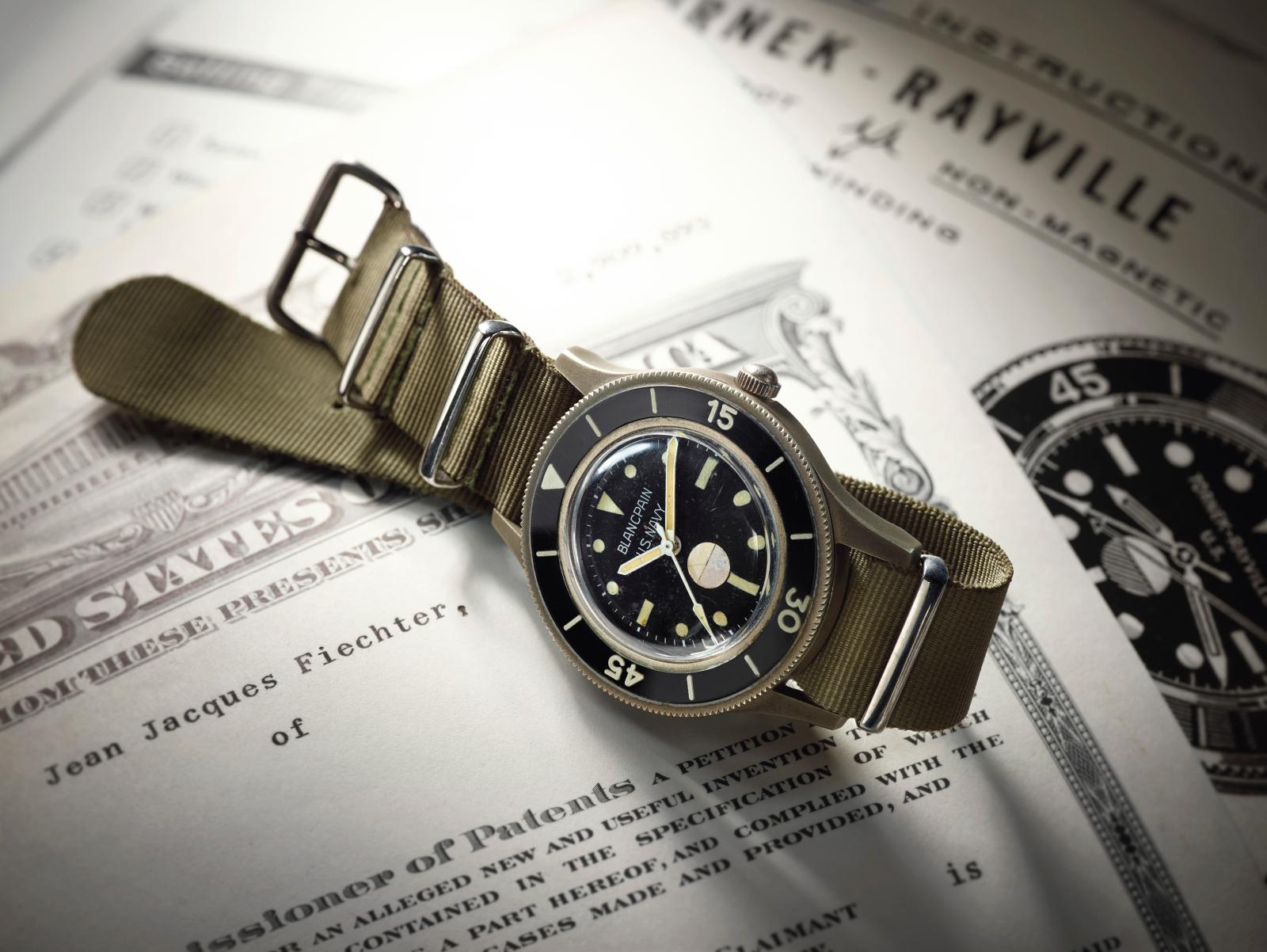 Fifty fathoms… A strange unit of measurement designating the first-ever modern diving watch. A simple, utilitarian watch with no frills. A deep-sea watch that cuts the mustard. In short, Blancpain's Fifty Fathoms is functional first and foremost, meeting a purely military requirement when it was created in 1953. In its original version, Blancpain's best-seller is now a highly desirable item fiercely hunted on forums, and considered spoils of war by purists, so rarely does it come on the market. At the Hôtel Drouot, the last one sold to date fetched €6,500 on 19 July 2017 (with Gros & Delettrez): over three times its estimate. Fanatics far prefer it to the younger, much-hailed Rolex Submariner: it is more unobtrusive, and for good reason, because the Fifty Fathoms was designed for the shadowy French secret services. It was a crucial issue for the first combat diver unit of the Hubert commando and the SDECE (pronounced "zdek") created by Robert Maloubier, the brilliant head of intelligence. Among other things, the bomb disposal operations of this elite group would depend on this watch. The seventy men trained at Arzew, near Oran, had scant equipment: no compasses, no depth meters – and no watches, as the models of the time were totally unsuitable for diving. So it meant starting from scratch…

Maximum Pressure for Blancpain
Robert Maloubier and Lieutenant Claude Riffaud headed operations, with an ultra-precise roadmap, whose conditions were accepted by a small watchmaking company. This was a sizeable challenge for Blancpain, a firm based in a Swiss village, Villeret, far more used to miniatures with Helvetian complications than heavy-duty watches. However, it was the only watchmaker to take an interest in the project: a model with a black face, large numerals, clear markings in the form of triangles, circles and squares and a secure external bezel. The watch not only met the specifications, but far exceeded them. It anticipated potential problems, like the use of the famous uni-directional rotating bezel: an absolute must for an experienced seaman aware of the tiny but very real possibility that a diver could inadvertently turn the bezel and stay underwater for longer than the air supply. A splendid achievement, and only one of several technical brainwaves that revolutionised watchmaking: a stainless steel case, a graduated Bakelite bezel, a screw-on case back with double 'O-ring' seals, automatic winding to limit use of the crown, and magnetic field protection. Looks-wise, the Fifty Fathoms is a handsome beast. Virile, sporty and wide (with a diameter of 42 mm), it cuts a fine figure on the wrist. Identifiable at first glance with its luminous hands and hour markers, and its sturdy three-looped "NATO" canvas strap, it features nothing superfluous, only the essential – like the small circle at 6 o'clock: an ingenious humidity indicator that changes colour if any water penetrates. And lastly, there is its name – more literary than it appears, as it evokes Ariel's song in Shakespeare's The Tempest: "Full fathom five thy father lies/Of his bones are coral made". "Fifty Fathoms" means a depth of 90 metres: the limit for a dive using compressed air at the time. However, the watch is actually water-resistant up to 150 metres! In its early days, it was subject to military secrecy, and distributed only by the official supplier to the Navy. It also has an official number certifying its acceptance by the American, Pakistani, German, Spanish and Israeli navies. Later, it entered the civilian world when it was turned into an icon by Commander Cousteau, whose film became famous the world over in 1956, winning the Palme d’Or at Cannes, and an Oscar in Hollywood a year later. (The documentary was made jointly with the 21-year-old Louis Malle, recruited because he was good at the crawl!) Not a single close-up of Cousteau's crew fails to feature the watch, showing the time spenand the time remaining. "The Silent World" propelled diving into the limelight as a water sports activity, and launched the Fifty Fathoms on the road to commercial success.

"We wanted each of the markings to shine like a star for a shepherd."
Robert Maloubier

A Luxury City Watch
First sold in underwater equipment stores at harbour masters' offices in ports, it suddenly turned Parisian in the 1960s with the arrival of the French factory LIP, which offered its network to Blancpain as a means of powerfully boosting its model. It was the right move, resulting in a brand-new niche relayed by advertising, sporting the photo of a diver. From the initial 2,000 watches originally produced, the figures soared, and 50,000 watches were sold in under ten years –  growth barely dented by the paranoia that raged through America over the radium covering the luminescent hands. There was no trace of suspect radioactivity with Blancpain, and tritium saved the Fifty Fathoms, awarded a "No Radiation" label prominently displayed on the new (and now cult) 1970s versions in the form of a barred radioactive logo. By  then a little outdated with its “Cordings” look, the Fifty Fathoms went into a long period of limbo before spawning a new generation some thirty years later. It then suffered the fate of all watchmaking icons: that of endless variants, with cases in red or white gold, new calibres, a chronograph version with a flying tourbillon, and a GMT version with a decompression valve. It was even made water-resistant up to 1,000 metres! On the way, it has of course somewhat lost the "army surplus" style that pushes up the bidding in the saleroom. It has become civilised, with an impeccable finish, an ultra-technical movement and a graphic dashboard. A luxury city watch that navigates between the streets and the open sea, with the serene virility of all myths that smack of heroism.