The city of Rennes has just acquired a scale model of the equestrian statue of Louis XIV by Antoine Coysevox, an exceptional acquisition made possible by its designation as an object of major heritage interest. 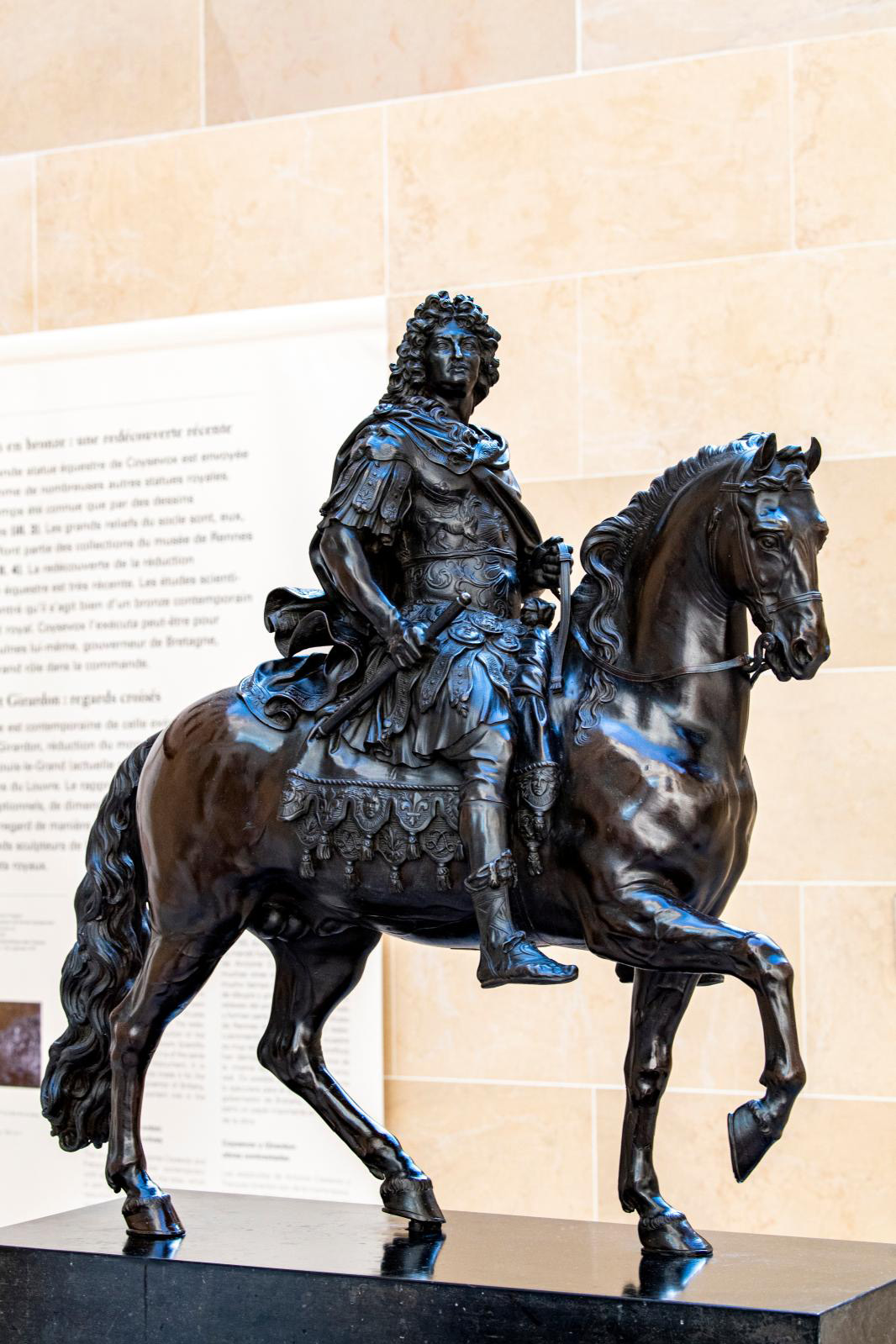 From May 11 to September 5, a scale model of the equestrian statue of Louis XIV by Antoine Coysevox (1640-1720) was on display in the Louvre’s Puget Courtyard “opposite François Girardon’s scale model of the monument that once stood in Place Vendôme, allowing a unique dialogue between two great sculptors from the reign of Louis XIV,” says Valérie Carpentier, head curator of 17th-century European sculpture at the museum. The 94 cm/37 in. tall statuette on a 120 cm high rectangular green marble conglomerate pedestal will join the Musée des Beaux-Arts in Rennes, where it will be unveiled during Heritage Days on September 17 and 18. Guillaume Kazerouni, the head curator of the museum’s ancient collection, admires "the very high quality of the bronze cast, confirmed by the analyses carried out at the C2RMF and whose few flaws have allowed it to be dated to the late 17th century." He also praises "the very high quality of the workmanship. The style is energetic, thanks in particular to the somewhat baroque style of the wig and the coat. This work looks more alive than the other equestrian statues of the Sun King, for example, the one by Girardon in Paris. That makes sense given the links between Brittany and royalty. A lively king on the move is obviously what we wanted to show here." The royal statue will stand in the same room as Charles Le Brun’s immense Descent from the Cross. The sculpture’s planned arrival was an opportunity to rethink the exhibition’s museography. Triomphe de la France sur les mers (The Triumph of France on the Seas), the two bronze bas-reliefs Coysevox cast in 1693 for the pedestal of the Rennes monument, will frame the statue, “allowing us to bring together the king’s first painter and first sculptor as well as the king himself,” says Mr. Kazerouni. Next to them will be "Coysevox’s bust of Monsieur Vaucel, which has been in the reserves until now. Its female counterpart is in the Louvre”.

Coysevox’s Renown
Born 1640 in Lyon, Coysevox, along with his nephews Nicolas and Guillaume Coustou and, of course, François Girardon, ranks among the leading French sculptors of his generation. From 1671 Coysevox was active at Versailles where he made copies of statues from classical antiquity for the gardens. Admitted to the Academy of Painting and Sculpture in 1676, in the early 18th century he was the first sculptor to be appointed its director. The renowned portraitist made two statues of the Sun King: the pedestrian statue for the Paris City Hall (Carnavalet Museum) and the equestrian statue commissioned by the States of Brittany in 1686, which he carved between 1688 and 1689. This is his most monumental work, along with the spirited marble horses completed in 1702 for the drinking trough at the Château de Marly (Mercure et La Renommée montée sur Pégase, or Mercury and Fame Riding Pegasus, the Louvre). The scale model was in the collection of an English aristocrat for a long time: one source attests to its presence in the late 19th century. It came out on the market over three years ago. Mr. Kazerouni remembers receiving a letter from Christie’s identifying the work as a scale model of the original in Brittany. “We couldn’t pass up the opportunity,” he says. The only way to acquire such a statue is to have it recognized as a work of 'major heritage interest.' In France, the January 4, 2002 law on patronage extended the tax scheme previously reserved for national treasures to any cultural property whose acquisition is of "major interest for the national historical, artistic or archaeological heritage." This entitles a sponsor company that endowed a public collection to a tax reduction equal to 90% of the payment’s amount.

A Major Work
This marked the start of a wild adventure and a race against time. With help from a team of researchers, Mr. Kazerouni put together a thick dossier in record time. In particular, he assembled a series of documents allowing the statuette to be attributed to Coysevox. One of them is a print by Jean-François Huguet depicting the monument’s inauguration in the new Place du Palais on July 6, 1726 (Musée des Beaux-Arts in Rennes). “To tick all the boxes for a heritage object of major interest,” says Mr. Kazerouni, “we had to demonstrate a historic interest and an artistic interest, not just regionally but nationally, and that the artist is important. The historical dimension has proven to be particularly convincing since this is the only 17th-century royal statue in Brittany. It’s also a masterpiece by Coysevox and one of the period’s largest monumental casts, along with Girardon’s contemporary equestrian statue. The fact that parts of the base have been in the Rennes museum since its creation in 1801 was another solid argument.” The Advisory Commission for National Treasures rendered a favorable opinion in October 2019. All that remained was to find a company or companies willing to fund the purchase, estimated at €2.37M. The museum succeeded in accomplishing this delicate task. A single benefactor came forward: Bruno Caron, founder and chairman of Norac, a food company. “We thought the work was symbolically important for Rennes,” says Mr. Caron, a discreet patron active in the world of contemporary art. He emphasizes the historical importance of the lost monument that once stood in the square outside the parliament of Brittany, which was rebuilt after a fire in 1720. Its complex political history was fraught with tensions between the king and Brittany. By commissioning such a monument through the intermediary of architect Jules Hardouin-Mansart (1646-1708), the king—as he did in a dozen other large cities that joined the kingdom late, which is obviously no coincidence—marked his desire to impose a strong image of the centralized state in his likeness.

The monument commissioned by the States of Brittany in 1686 was originally planned for Nantes. It was finally inaugurated in Rennes in 1726, nearly 40 years after its completion. In 1793, the colossal bronze statue was toppled and melted down to make cannons. The scale model is a rare object, the only surviving equestrian statue of Louis XIV by Coysevox. Apart from its undeniable artistic quality, it boasts exceptional dimensions for a scale model. “Scale models like this cost a fortune,” says Mr. Kazerouni. “They were usually produced immediately after the monumental work at the behest of the king himself or very wealthy patrons. It has long been thought that the monument in Rennes may have been commissioned by the Duc de Chaulnes, governor of Brittany under Louis XIV, but no inventory or source backs that up. This opens up great research possibilities.”