Piye, Chabaka, Taharqa… The Kushite kings of the twenty-fifth dynasty ruled over Egypt, ushering in a religious and artistic renaissance. Their story is now being told by the Louvre, and not just in a didactic way. 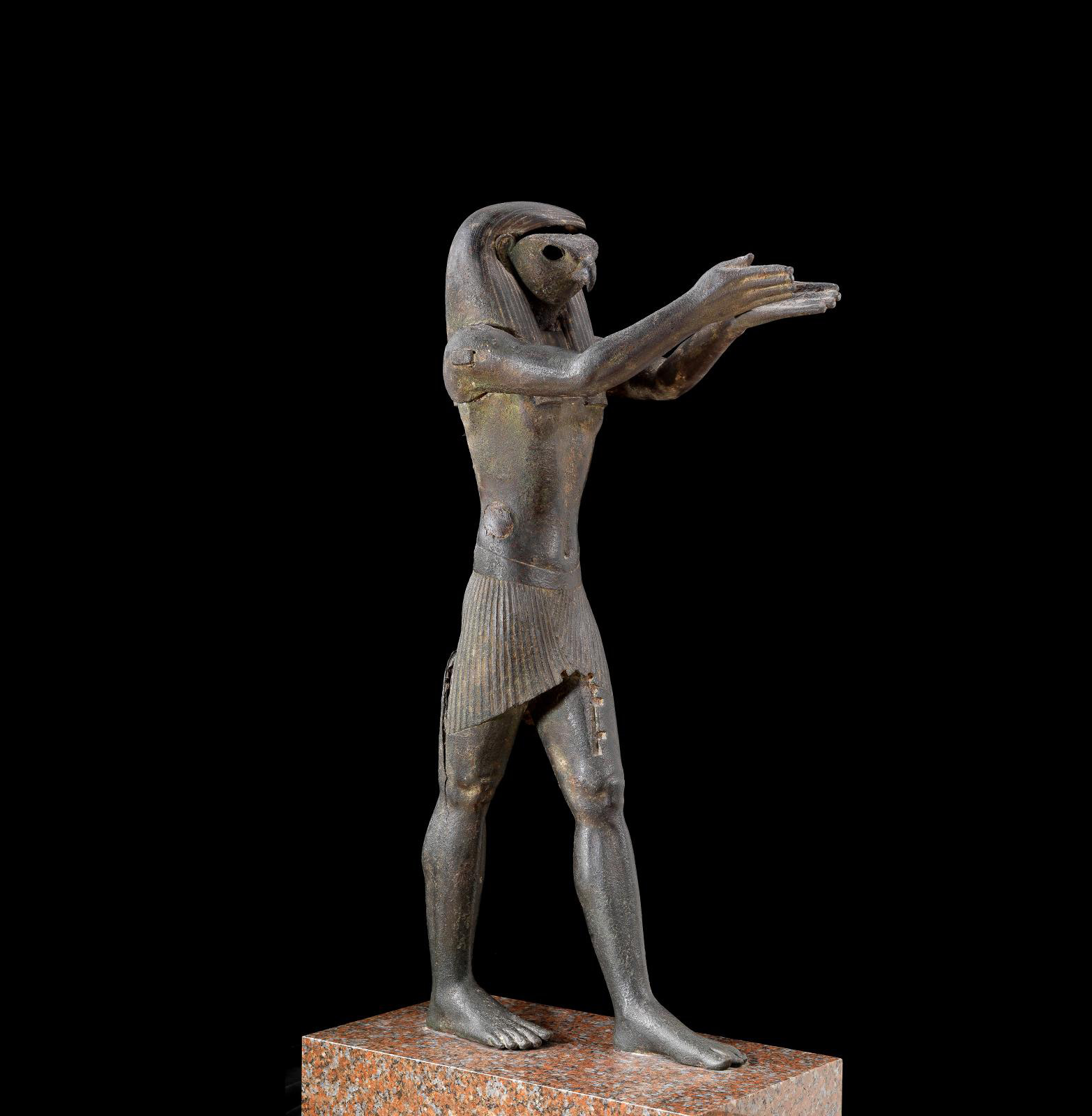 They are not widely known to the general public, these “burned-face” pharaohs as described by Herodotus in his Histories in the fifth century BCE and cited in the Bible—Taharqa is mentioned by name. This is explained by the fact they came on the scene late, well after the powerful reigns of Amenophis and Ramses, those of the eighteenth and nineteenth dynasties (around 1500-1100 BCE). The great and powerful Egypt was weakened, divided—with one capital in the Tanis delta and the other in Thebes—threatened by the Assyrians’ desire for conquest. In the extreme south, beyond the second cataract, the land of the Kush awakened. Vassal of the land of the pharaohs from the Middle Kingdom, the Kush paid its tribute, acculturated to the point of adopting its pantheon and eventually gained its independence. The pious king Piye (formerly called Piankhy) felt the responsibility of a mission: to bring unity back to Egypt and restore cults in the temples to guarantee cosmic order. From his capital Napata, he sent his armies to conquer it and founded the twenty-fifth dynasty.

“Pharaoh of the Two Lands. The African Story of the Kings of Napata” tells the story of this chapter in the history of the pharaohs, which did not last a century (720-655 BCE) but marked a “renaissance” in Egyptian art, with a return to the somewhat massive canons of the Old Kingdom. With one exception: the bust of Mentuemhat, mayor of Thebes, represented here as the prophet Amon and for whom the refinement of the wig and features are reminiscent of the eighteenth or nineteenth dynasties. While the latter comes from the Brooklyn Museum, most of the works on display come from the collections of the Louvre itself—including the emblematic Taharqa in front of the Hemen falcon, the golden Osorkon triad and the Serapeum steles from Memphis, key to following the chronology and successions of the Kushite kings—supplemented by loans, notably from the National Museum of Sudan in Khartoum. The disarming introduction features the reconstruction of a statue of Taharqa, digitally restored and with a headdress gilded with gold leaf: a surprisingly kitsch vision, which we find again at the end with the group of sculptures of the five Napatan kings discovered broken in 2003 in a pit in Dokki Gel, the ancient city of Amon of Pnubs. It is inconceivable to imagine that by way of an introduction to an exhibition on Hellenistic art, the same Musée du Louvre would recreate a Venus de Milo, complete with her arms and repainted as she might have been in the second century BCE. The merit of these reconstructions is that they emphasize the iconography of the Pharaoh of Kush, who wears the double uraes—representing the union of the two lands—the so-called “Kushite” headdress, the triple necklace and earrings decorated with the head of the ram of Amon of Nubia.

In some of the exhibition’s somewhat sterile passages, the context of the rediscovery of these kings in the nineteenth century is illustrated by the competition between Franco-Tuscan, Prussian and English missions to find the source of the Nile and the mythical empire of Meroë, with officer Linant de Bellefonds’s survey of the monuments, or the role played by Auguste Mariette in showcasing these pharaohs in the Cairo museum, which he founded, and his collaboration with Verdi for Aida. In this romantic and quixotic vision of the relationship between Egypt and Ethiopia, we find intrigues and alliance power plays reminiscent of those of Psamtik I (663-609 BCE) with the Assyrians to bring down the Kushite kings. An exhibition that needs you to take your time.

“Pharaoh of the Two Lands. The African Story of the Kings of Napata", Musée du Louvre, Paris I.
Until July 25, 2022.
www.louvre.fr

Preemption by the Louvre Beneath Akhenaton's Gaze

Treasures of Egypt and Turkey
Newsfeed
See all news
Africa and NFTs: A Growing Market That Could Explode
Just Stop Oil Protesters Glue Themselves to "The Hay Wain"
France: The 2022 Rencontres de la Photographie in Arles is Open
Cairns Indigenous Art Fair Returns Tomorrow After 2 Years Online
Not to be missed
Exhibitions