Open to the public since 2021, this new Dutch facility explores original ways to store museum collections. We take a look at a unique space for interaction and discovery. 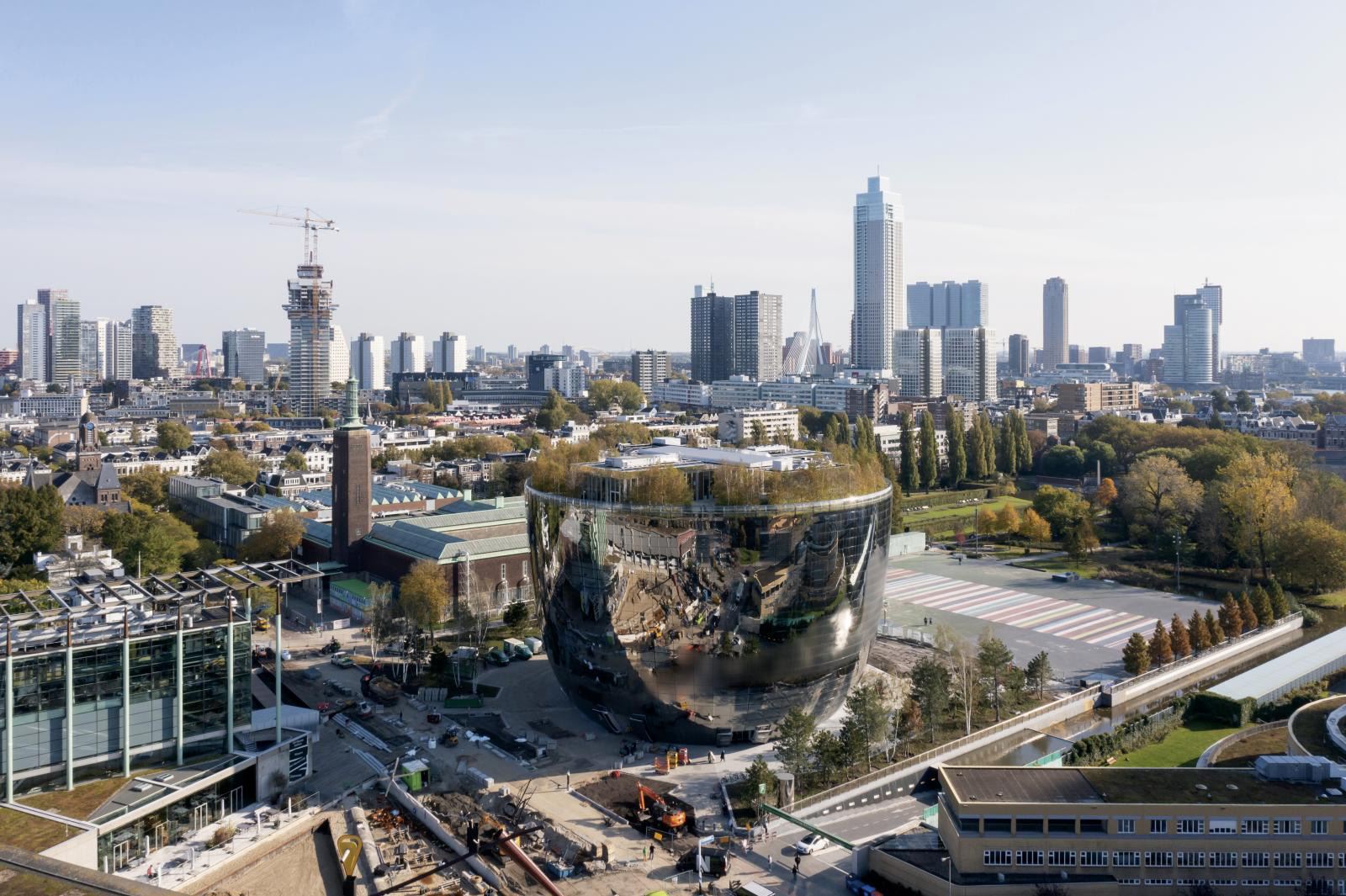 Its name, "Depot Boijmans Van Beuningen", plays on the French word "dépôt" (in the sense of a reserve or storage) and the Dutch "de pot", meaning "the pot". And this new place inaugurated last fall in the heart of Rotterdam indeed looks like a flowerpot. The round, minimalist building with its 1,664 mirrors reflects the urban environment and the sky, blending seamlessly into the landscape. "Rotterdam is a city that was rebuilt piece by piece after the Second World War," says architect Winy Maas from MVRDV, which designed the building. "Reflecting the environment is a testament to that history. Its circular shape reduces its footprint on the ground. The idea was to be as compact as possible, because today, the crucial issue in the Netherlands and around the world is space." With a total surface area of 165,764 sq ft (15,400 m2), the "Depot" is a model of its kind, firstly in terms of its financing. "The building cost €94 M, covered by a bank loan of €53 M spread over 40 years at a very low-interest rate, and supplemented by donations of €41 M," says Sjarel Ex, co-director of the Boijmans Van Beuningen Museum. "We have to pay rent to the city, repay the loan and pay the staff. Fortunately, we expect to make €6.5 to €7 M a year from ticket sales [€20 for a full-price ticket—Ed.], hiring out spaces, the services we offer and income from the rooftop restaurant, which pays us 10% of its turnover."

Behind the Scenes in an Art Warehouse
The building has certainly disrupted the conventional model for museum storage, not only by welcoming the public, but also by renting 20,451 sq ft (1,900 m2) to corporate collections or individuals to store their works at €400 per m2 per annum. One area is even dedicated to individual collectors who have an installation, sculpture or painting too bulky or fragile to keep at home and wish to store it here. "The municipality is involved in the project because it holds 85% of the museum's collection. It contributes €3.5 M each year to running costs. So we are aiming for about €7 million in rent," says Sjarel Ex. Ironically, though this was designed to be a valuable tool for the museum, it has now become its showcase as well. "We were hoping to have both open at the same time, but the museum is closed for large-scale work until 2028. The original question was 'what is a museum with its storage?' It has now become 'what is storage without a museum?'" he says, with a smile. Inside, the reception area might confuse visitors, but they are not in a museum! The most spectacular feature lies in the heart of the building: the MVRDV agency designed a huge atrium occupying its entire height—114.8 feet (35 m) on six levels—plus a few meters for the rooftop planted with a background of birch trees. It is a kind of futuristic cocoon of metal and glass with glazed staircases and elevators—the very opposite of a bunker. Everywhere, display cases contain works including Old Masters, Maurizio Cattelan, Rodin, Sarkis and even classical furniture. A representative summary of the collection, carefully laid out on racks and shelves, accessible to the public and especially to the curators, thanks to bar codes. It is not easy to find your way around: the pieces are not grouped by period or movement as in a museum, but according to material, format and conservation, with five different temperature zones. A room dedicated to design houses 1,000 pieces, visible or in boxes, as well as works by Günther Uecker and Jannis Kounellis. With some 151,000 items—63,000 paintings, photographs, sculptures and installations, and 88,000 drawings and prints—the collection is based on a major donation from Frans Boijmans and Daniël George Van Beuningen, which includes Rubens and Jacob Van Ruisdael, and has been swelled by works by the Van Eyck brothers, Bosch, Rembrandt, Monet and Gauguin.

A Hybrid Identity
Conservation and restoration workshops also form part of the original facilities. "The reserve combines three entities: the museum's collection, a laboratory where the team works on artworks, and storage areas for private clients. It's a hybrid creature, which makes it highly unusual. A bold model. With these private collections, the museum's identity has been enlarged," says Francesco Stocchi, modern and contemporary art curator at the Boijmans. "Before, you had to locate a work in one of our warehouses, sometimes as far away as Belgium, and go there and ask for it. Now, everything is on-site, in the immediate vicinity of the museum, and when you seek out one work, you can access others at the same time!" Several rooms are devoted to temporary exhibitions, including one huge enough to accommodate installations. "We have some fine ones by Daniel Buren and Olafur Eliasson. This room was designed to house works like these, which we don't have the space to show in the museum, as it is always taken up with exhibitions or the permanent display," says Sjarel Ex. Last but not least, the Depot also houses corporate and private collections, like KPN's, which has been built up over the past century and includes some "1,500 works, 800 of which are stored in the Depot, with 600 exhibited in our offices, mostly by Dutch artists, purchased early in their careers," says Susanne Lange, a representative of this major private telecom company. An adjoining lounge full of contemporary artworks can be used for meetings, while ordinary visitors have access to the collection. Further on, the more international Rabobank Collection, in addition to its storage space, has an exhibition that includes pieces by Folkert de Jong, South African artist Marlene Dumas and a large photograph by Otobong Nkanga. "Our aim is to exhibit our collection, not hide it away in a storage room or in our offices. This place is ideal in that respect. It is central, well placed, secure, and meets the highest standards for conserving works," says a manager. For these corporate collections, there is no longer any need to create a specific and expensive location. The Lakeside Collection, 80 or so contemporary works owned by the Dutch real estate company of the same name, is also housed in the Depot. This storage space embodies a completely new idea in regards to museum reserves, now open to the city and its residents, and is also based on a very Dutch concept of openness: "When I was growing up in the 1960s," says Sjarel Ex, "people didn't draw their curtains. We are a people who are used to having nothing to hide." Is this model applicable elsewhere? "We have found a system here that generates income. I'm happy about that because it's become problematic to keep a collection that doesn't make money. And we have kept 20% of the space for our future acquisitions," says Sjarel Ex. Directors of future museums from Singapore to Norway are eyeing up the Depot, attracted by its many advantages. It remains to be seen whether, in a major world metropolis, passing foreigners would rather visit the museum itself than its storage...

The Schlumpf Collection, a Passion for Automobiles
Newsfeed
See all news
Africa and NFTs: A Growing Market That Could Explode
Just Stop Oil Protesters Glue Themselves to "The Hay Wain"
France: The 2022 Rencontres de la Photographie in Arles is Open
Cairns Indigenous Art Fair Returns Tomorrow After 2 Years Online
Not to be missed
Analyses