Four drawings by Odilon Redon, bought by Louis-Charles Libaude at the time, encapsulate a brilliant, unclassifiable artist, and are scheduled to take flight once more. 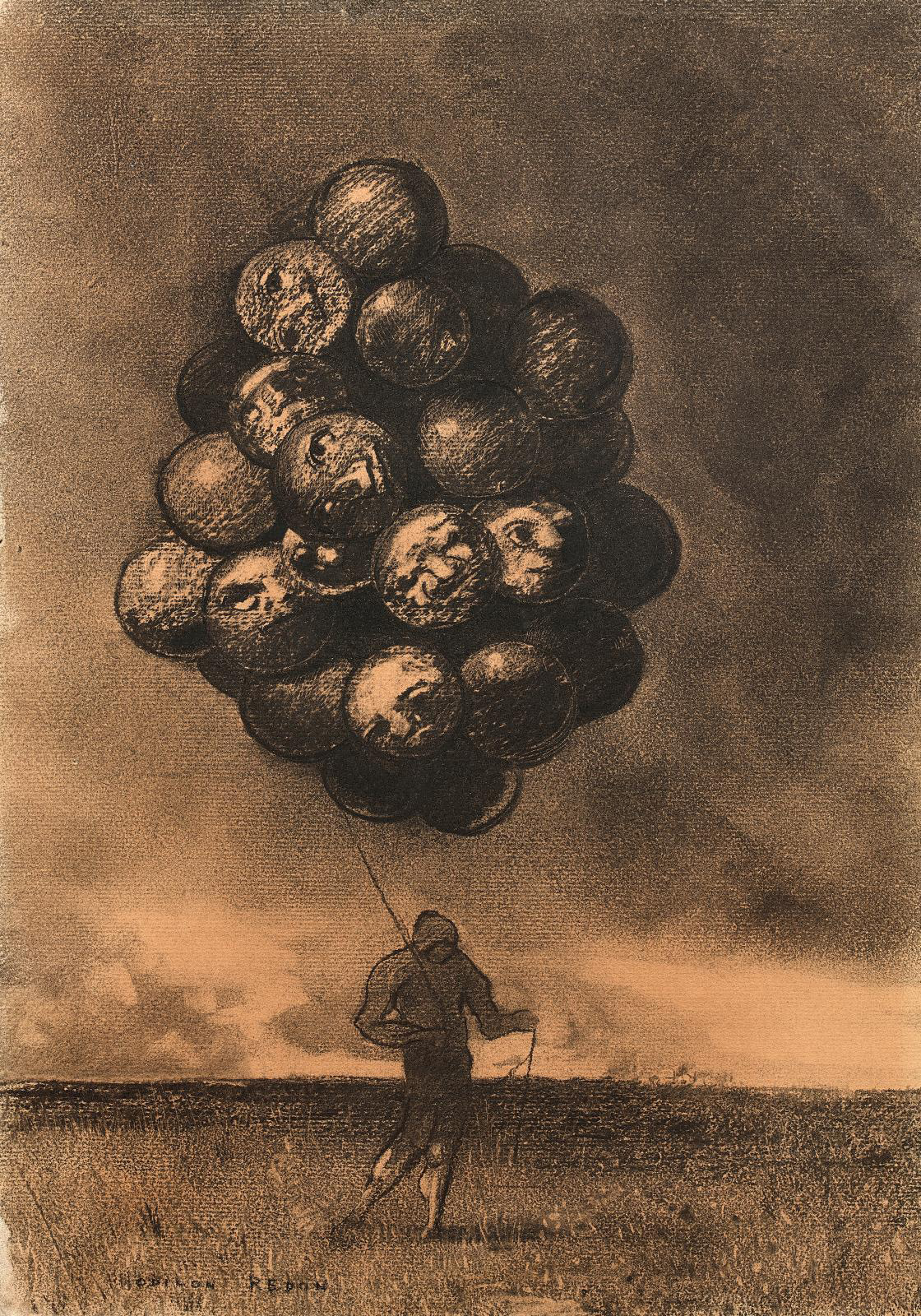 Louis-Charles Libaude (1869-1922) had a fascinating career and is no stranger to these pages, as he was an auctioneer until 1910 when he resigned from the Compagnie de Paris. He left the judiciary to set up as an art dealer in a gallery at 17 Avenue Trudaine, taking over from Georges Thomas. He followed and sold the work of Pablo Picasso (a pioneer in this respect), Maurice Utrillo, staging the artist's first exhibition in May 1913 at the Blot Gallery, was friends with Emile Bernard, who painted his portrait in 1909, and collected artworks by Marie Laurencin, Raoul Dufy, Maurice de Vlaminck, Olga Boznanska (three of whose oil portraits are also in this sale) and Odilon Redon.

Libaude's many talents included a deft pen: in October 1892, under the pseudonym Louis Lormel, he launched L'Art littéraire, in which he published various writings including Tableaux d'âme (Paintings of the Soul) in 1908.

Libaude staged his return to the Hôtel Drouot on March 9, 1918, and May 19, 1920, when he decided to sell a large part of his collection through the intermediary of Georges Aulard. Redon's Visage cellulaire (Cellular Face), then titled La Fleur humaine (The Human Flower), Le Satyre au cynique sourire: le faune (Satyr with a Cynical Smile: The Faun) and Le Prophète (The Prophet) thus appeared on the iconic red walls of Drouot; the first in 1918, the other two in 1920. Here they are again a hundred years later, after their rediscovery by Éric Beaussant in an attic during an inventory in the unoccupied house of Libaude's descendant. They are accompanied by La Grappe ou Le Marchand de ballons (The Cluster or the Ballon Merchant), a previously unseen work relegated to the cellar. It is an extraordinary short story in the tradition of Edgar Allan Poe, of which the sale will now provide the end: a happy one, surely.

Master of Black
Odilon (born Bertrand) Redon (1840-1916) is famous as an absolutely brilliant, totally unclassifiable artist, who explored drawing like no one before him, making blacks dance beneath the tip of his charcoal. In the spring of 2011, the Grand Palais offered its captivated visitors a magnificent retrospective detailing his early life: a peaceful childhood on a Médoc wine estate conducive to his fragile health, where he was remembered as a dreamy boy; a bourgeois, cultivated Bordeaux education; his first contact with artistic circles, and his training under Jean-Léon Gérôme and Rodolphe Bresdin. All in all, a highly conventional path that in no way presaged his remarkable sensibility: the quality that led him to express his overflowing imagination on paper, reinterpreting reality to create extraordinary creatures. Louis Libaude possessed several of these, all marked by a singular and powerful presence. Four of them are on offer—and here, covetousness is no sin.

A World of Dreams
Drawings and illustrations—or more precisely, interpretations of texts by himself and writers with fantastical imaginations: Poe, of course, and also Charles Baudelaire, Stéphane Mallarmé and Gustave Flaubert—made up an essential part of his work. It was only after 1890 that he expanded to painting and polychromy. His drawings are garbed in black. He himself spoke of his "blacks", expressed in charcoal or ink, drawing viewers into a disturbing world inhabited by deformed beings, macabre landscapes and disquieting shadows. The publication in 1879 of his first lithographic collection, Dans le rêve (In Dreams), brought him to the notice of the Symbolists; he was evoked by Symbolist writer Joris-Karl Huysmans in À rebours (Against the Grain), published in 1884. Like a puppeteer, he staged his inner torments, enriching them with references to Charles Darwin, the mysterious origins of the world and ghoulish themes from Poe. All this generated, rather than created, a series of drawings that question, unnerve and astound the viewer. The three verbs, not incompatible, are expressed by the four pieces (three drawings and a painting) now making their entrance, or returning to the auction scene.

They are void of any hope of escape to sunnier horizons, even in his Marchand de ballons (Balloon Merchant) (also called La Grappe—The Cluster: €80,000/120,000), which echoes L'œil, comme un ballon bizarre, se dirige vers l'infini (The Eye, Like a Strange Balloon, Moves Towards Infinity) of 1882 (collection of the Metropolitan Museum of New York). For if the title evokes a nostalgic memory of childhood, "which might almost give it an archaic charm, this black drawing has a strange, dark, picturesque quality," says the catalogue raisonné of his paintings and drawings (Alec Wildenstein, vol. II, La Bibliothèque des Arts, Paris, 1994, described and reproduced on page 181 as no. 1099).

There is no escape either with Visage cellulaire (same estimate), a fascinating concentrate of his world mingling fantasy, melancholy and the symbolic use of the eye as a window to an inner vision—or, naturally, with Le Satyre au cynique sourire (€30,000/50,000). Through his choice of titles, the draftsman transcended the poetry, which Mallarmé described in a few equally masterly words: "My dear friend, in our silences you ruffle the plumage of Dreams and Night. Everything in this album fascinates me, most of all the fact that it is all personal to you, stemming solely from your Dreams: the invention has depths, like certain blacks, O lithographer and demon; and, as you know, Redon, I am jealous of your legends." (Letter of November 10, 1891). As the new century approached, Redon, imbued with a new tranquility, opened out to color through pastel and paint, and to happier themes found in Greek mythology, vivid bouquets of flowers and plant elements for magnificent decorations. "I embraced color, since it is hard for me to do without it," he said. The painting Le Prophète (55 x 46.5 cm/21.6 x 18.3 in, €40,000/60,000) belongs to this period. At the 1920 sale, this was sold for FF3,300: the equivalent of €2,992 today. Dream on, bidders!

Olga Boznanska, the Lady from Poland

In the winter of 2019, the Louvre Lens staged an exhibition entitled "Poland 1840-1918: Painting the Soul of a Nation". This focused on the richness and variety of the country's humanist and intellectual milieu, and the paths of various artists who set out for France, drawn by the siren song of modernity. Though they were mostly men, there was one woman: Olga Boznanska (1865-1940). The painter, born of a Polish father and a French mother, lived in Krakow, then Berlin and Munich, where she stayed to develop her style before moving to Paris in 1898, seeking to enrich her talent. An exhibition staged by dealer Georges Thomas soon brought her success. The artist claimed the particular influence of Velazquez and Manet—hardly by chance. She was also marked by the Symbolist poetry of Maurice Maeterlinck. A portrait artist above all, Boznanska depicted her figures (some of them famous) against deliberately blurred backgrounds that merged with their silhouettes so that the viewer's attention is instantly and solely captivated by their intense gaze. Aided by a subtle palette, she aimed to express their psychology. Various critics of the time saw a connection with the work of Eugène Carrière, especially in her portraits of women with children. Louis Libaude, fascinated by Odilon Redon and Symbolism, certainly admired the work of this painter—who, too, spoke to the soul—and probably asked her to portray his erudite figure.
Former Louis Libaude collection and various amateurs - Part II
Salle 4 - Hôtel Drouot - 75009
Beaussant Lefèvre & Associés
Info and sales conditions
Catalogue

The Jeanne Tachard Collection: The Choice of Modernity
Newsfeed
See all news
UK’s Royal Albert Memorial Museum Returns Sacred Items to Siksika Nation
Moulin Rouge Windmill in Paris Becomes Airbnb Rental to Celebrate its 133rd Birthday
China: Discovery of the Oldest Portrait of Confucius
A “Pop District” is Coming to Pittsburgh
Not to be missed
Spotlight