Part of the fabulous collection of the kings of France, which was dismantled in the 19th century, is once again glittering at the Louvre’s newly refurbished Apollo Gallery. Here’s a look back at their rocky history. 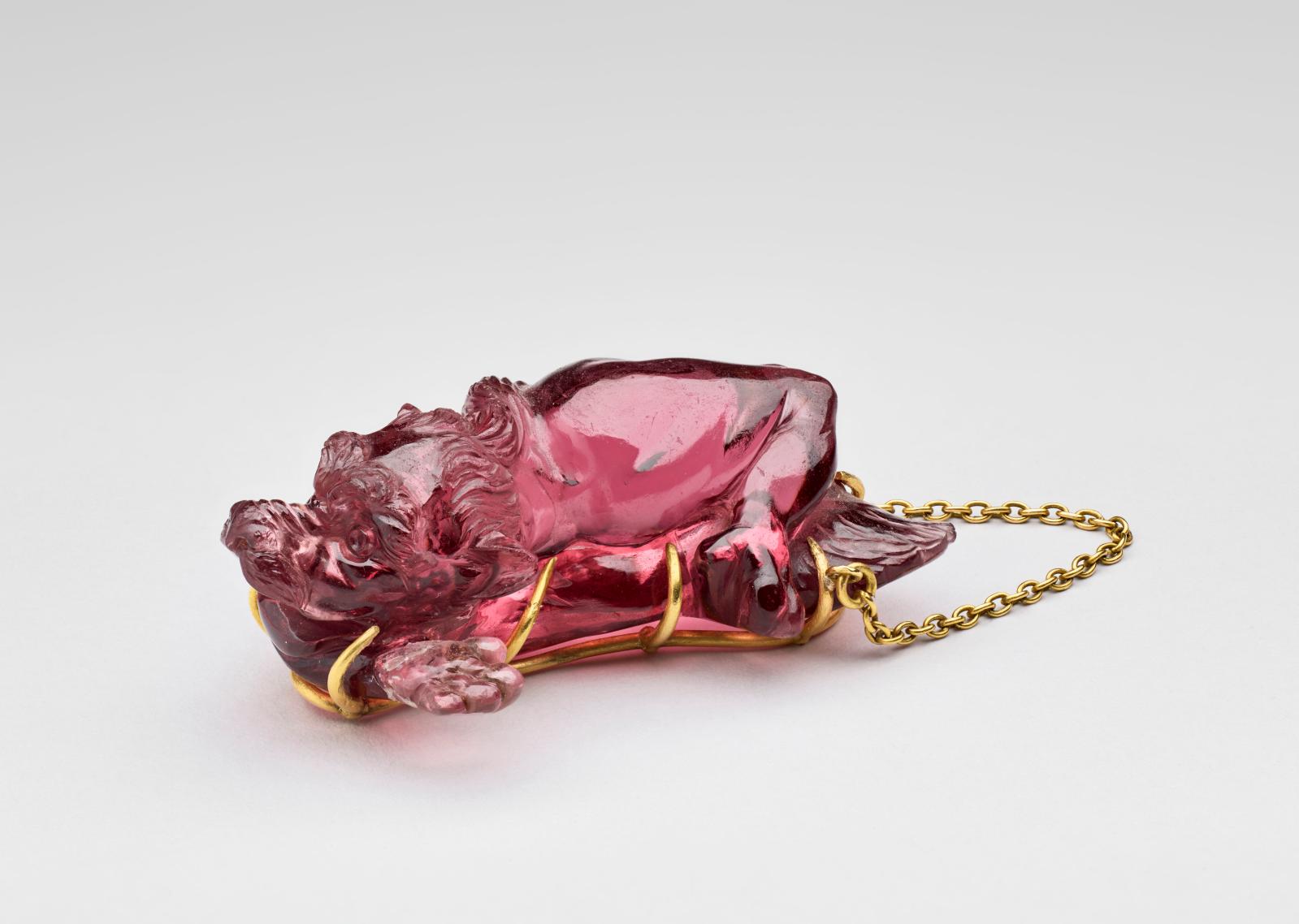 A visitor could gaze for hours at the Côte de Bretagne, a 107-carat, dragon-shaped red spinel, if he could ignore the crowd in the Apollo Gallery, where 22 other historical jewels and hard stone objects collected by King Louis XIV (1643-1715) are on display. This stone alone embodies the incredible epic of the "Crown Diamonds" and milestones in the history of France with its share of treason and revenge, low blows and hard knocks. The Côte de Bretagne has seen it all: pawned, bought back, missing, cut by Louis XV into a dragon’s shape, causing it to shed a good hundred carats. However, this fascinating stone escaped the worst: the great sale of 1887. That this jewel from the distant 15th century should be displayed in the former palace of the kings of France is a kind of miracle.

The Desire of King Francis I
"King Francis I (1494-1547),” says Jannic Durand, head of the Louvre Museum’s decorative arts department, “founded the institution of the Crown Diamonds: eight jewels, selected from his chest, were declared inalienable. Until then, they had belonged to the kings." Several decades later, one adventure followed another: to finance the wars of religion, Francis I's grandson, Henry III, pawned the Crown Diamonds, enriched with a large 42-carat table diamond. As his resources improved, he bought them back and pawned them again before his assassination in 1589. The treasure is gone forever, except the Côte de Bretagne, which went back into the Royal Garde-Meuble safe under the Restoration in the 19th century.

Guarded by Napoleon I's Sword
Louis XIV, who loved stones, generously added to his ancestors’ treasury, which already featured the Beau Sancy, given by Henry IV (1553-1610) to his wife Marie de Medici. The king kept the jewels that studded his court costumes in a "chest of stones" covered with finely carved gold lace. Other famous pieces include the Régent, which at 426 carats was the largest diamond the West had ever seen. The collection’s pride and glory, it was set in the coronation crowns of Louis XV, Louis XVI, Louis XVIII, Charles X, Napoleon III and others. The Régent decorated Emperor Napoleon's sword, delivered in 1812, before gracing Empress Eugenie’s Greek diadem in 1825. Like most of the Crown Jewels, it survived many dangers, from looting by revolutionaries in 1792 to being pawned to replenish the state coffers.

A Collection on Reprieve
Under the Empire, Napoleon I (1769-1821) bought many new gems. During the Second Empire, from 1852 onwards, the best Parisian jewellers turned the treasure’s thousands of stones into masterpieces. Stashed away for safekeeping during the 1870 Franco-Prussian War, they were exhibited at the Universal Exhibitions of 1878 and 1884. However, they were on reprieve: the very young Third Republic cherished the idea of forever depriving the monarchists of the possibility of using them. The idea of auctioning off this fabulous heritage gained ground and the law of alienation of Crown Diamonds was enacted on 11 January 1887. A commission was appointed to plan the auction, which fortunately saved some historical pieces. The Louvre Museum received the Régent and the Côte de Bretagne, the National Museum of Natural History was entrusted with Louis XIV's Grand Saphir and the École des Mines with Marie-Louise's amethysts and pink turquoises, among others.

The Tragedy of 1887
Once these few wonders were in safekeeping, the massacre began: the stones were removed from their settings "with furore and sometimes a pair of pliers," says François Farges. experts in a ministry basement sorted, classified and distributed the thousands of stones and pearls in lots intended for the auction, which took place from 12 to 23 May 1887. The sale’s outcome was financially disappointing, the market being glutted with stones. It was a historic and artistic tragedy. In the 1950s, Louvre Museum curators initiated an acquisitions policy. The outlook for the Crown Diamonds collection looks brighter with the acquisition, among others, of the great bow of Empress Eugénie’s corsage (2008). Today the collection can be enjoyed like a miraculously preserved treat.