This portrait of Claude Debussy by Jacques-Émile Blanche, the star in a sale of autograph letters and music manuscripts, illustrates the connection between these two iconic figures of the Belle Époque. 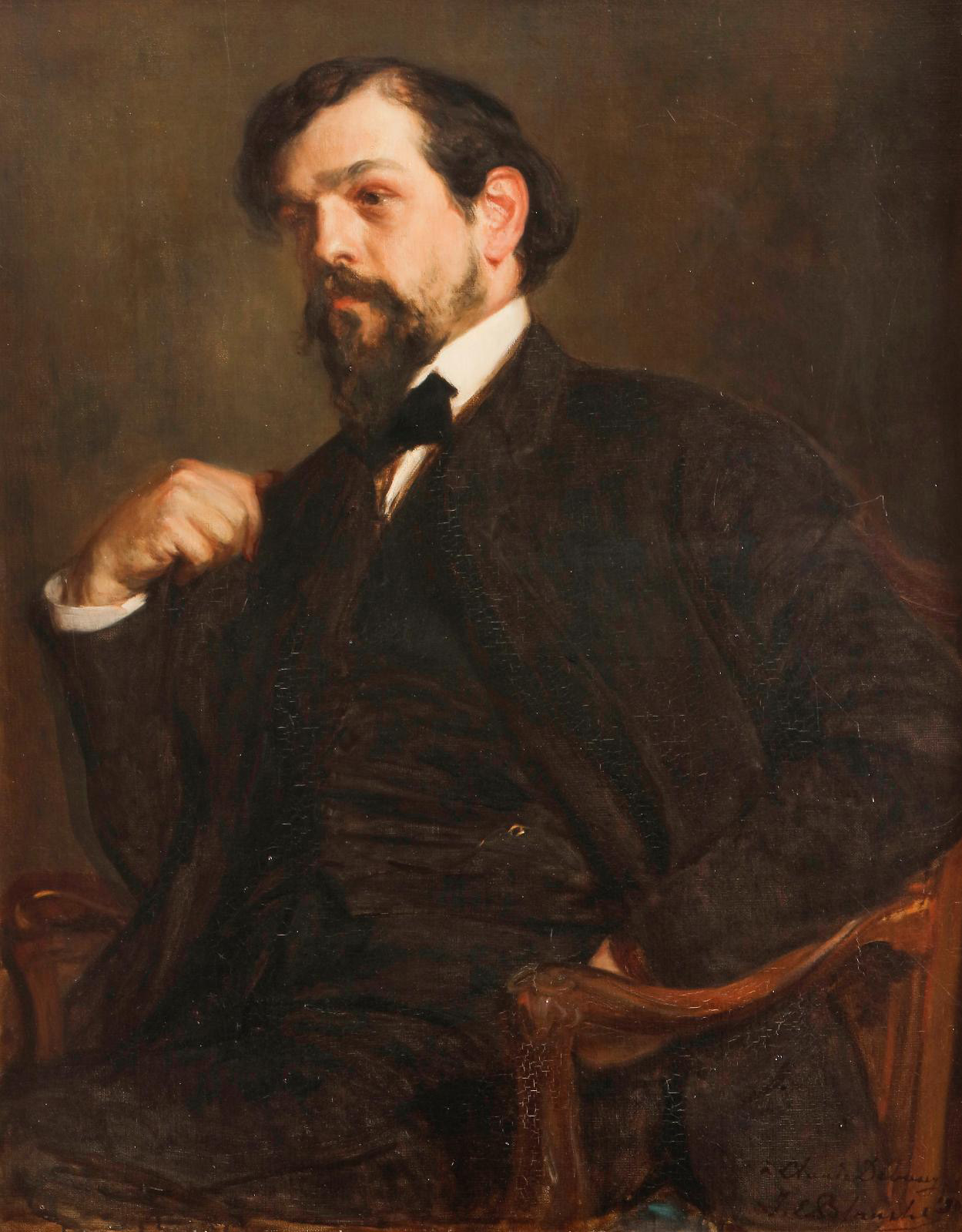 This painting is not unknown to art lovers. In 1903, a year after its execution, it was exhibited at the triennial Salon des Beaux-Arts in Brussels and at the 13th edition of the Salon de la Société Nationale des Beaux-Arts, in Paris, beneath the dome of the Grand Palais. Four years later, Londoners saw it at the seventh exhibition of the International Society of Sculptors, Painters and Gravers at the New Gallery. In 1910, it was shown in Barcelona. In 1943, the Musée de l'Orangerie in Paris paid tribute to Jacques-Émile Blanche, who had died the previous year, when the painting was listed as number 33. In the summer of 1954, the Musée de Dieppe in Normandy was the venue for an exhibition that featured works by Blanche and Walter Sickert, a major figure of the early 20th-century British avant-garde. In 1962, this portrait was displayed at the Bibliothèque Nationale (French National Library) for the centenary of the musician's birth, and in 1984 at the Villa Medici in Rome for the "Debussy and Symbolism" exhibition. Its last public appearance was in 2012, first at the Musée de l'Orangerie (February 22 - June 11), then at the Bridgestone Museum of Art at the Ishibashi Foundation in Tokyo (July 14- October 14). There are also several books on the model and the painter, in which it is reproduced: recognition for both of them. And now, it is facing a baptism by fire. For a long time, the work has been in the family of Jean Jobert (1883-1957), a Paris music publisher who worked until 1921 with Eugène Fromont—the first to publish Debussy's works, including Prélude à l'après-midi d'un faune (Prelude to the Afternoon of a Faun) in 1894—before taking over his collection, which brought him into contact with several composers.

An Iconic Painting
Thierry Bodin, an expert in letters and manuscripts and a well-informed music lover, is visibly moved and excited: "This is a magnificent portrait, which I saw at all the exhibitions on Debussy. Its estimate may be high, but it's on a par with the last bids obtained for major portraits by Jacques-Émile Blanche." Music lovers will have to pit themselves against the Cité de la Musique at La Villette (City of Music, Paris), as well as the Musée des Beaux-Arts in Rouen, which has held the largest collection of works by Blanche since the painter's own donation in 1921.

The portrait has plenty of assets: the restrained expressiveness of the model, the brilliant, rapid technique, its provenance—and the palette of browns set off by the light shades of shirt and flesh, worked on a bistre-coated canvas provided by his supplier, Paul Foinet. While Blanche's chromatic range was fairly conventional between 1890 and 1900 (as witnessed by the famous portrait of Marcel Proust at 21, when he was still a society columnist), it became more vivid in his portraits of Jean Cocteau, Raymond Radiguet, François Mauriac, Poulenc and Stravinsky. The latter, made in 1915 and now in the Musée d'Orsay, shows the composer on a beach under a stormy Normandy sky. Meanwhile, he painted Cocteau several times in 1912-1913, in the living room and garden of the manor house in Offranville, near Dieppe, which Blanche regularly visited from 1902 onwards.

Jacques-Émile and Claude-Achille
"I am and want to be a portraitist, a total portraitist of everything," said Jacques-Émile Blanche in the chapter "My first portraits" in La Pêche aux souvenirs (Fishing for Memories), published in 1949, seven years after his death. The son and grandson of famous psychiatrists who treated great neuropathologists like Nerval and Gounod, he was familiar from childhood with Paris high society and the art world and made a name for himself with vigorously brushed paintings, and books and articles penned with a caustic touch. A passion for the humanities and a taste for painting came together in this man who knew Manet, Degas, the famous dandy de Montesquiou and the young Maurice Barrès, the future figurehead of nationalism. All of them and many others sat for him, and he also painted city views, genre scenes and scenes of modern life.

He produced this portrait of Claude Debussy in the same year as the premiere of Pelléas et Mélisande on April 30, 1902, at the Opéra-Comique. It was a revelation for Blanche, and he was eager to paint a portrait of the man, as he was one of the few to have heard him "whispering, in his colorless voice, strange, freshly written scenes from Pelléas." The relationship between these two exact contemporaries a year and a half apart began in about 1894 at Pierre Louÿs' "Wednesdays"— and possibly at the home of Blanche Vasnier, the muse Debussy loved, and at Mallarmé's, whose "Tuesdays" they both attended. Blanche painted a second portrait of the musician in 1903, the year in which he wrote Estampes. A smaller bust replica of the one here, it is entitled Jardins sous la pluie (Garden In the Rain, Musée Claude-Debussy, Saint-Germain-en-Laye) and was inspired while he was painting a study of his head in his garden in Auteuil. The musician did not much like it, saying it made him look like "a fromage blanc worn out by late nights." This somewhat blunt comment affected Blanche, even though it was not the first time Debussy had been uncomplimentary about his portraits. However, thanks to their mutual admiration for Degas, the relationship continued between the Belle Époque portraitist and the composer from a humble background in Saint-Germain-en-Laye. Always in debt and with a stormy love life, nothing predestined him to become the artist unanimously acclaimed today.

A Mysterious French School Violinist
Newsfeed
See all news
Estate of Karl Lagerfeld is Going to Auction
Restitution, Nepal Seeks to Reclaim its Heritage
In Aubusson, the Cité internationale de la tapisserie Is Thinking Bigger
Tempera Work by Mark Tobey Approaches the Million Euro Mark
Not to be missed
Spotlight
An Invitation to the Ball with Magnificent Evening…
A wardrobe in exceptional condition takes us back to the splendors…
Spotlight
Eugène Gaillard, Samuel Bing and Émile Gérard:…
The destiny of three men converged on this iconic piece of Art Nouveau…
Spotlight
First Appearance at Auction of a "Saint Peter"…
A splendid find—a Ribera in fine condition, signed, dated and with…
Spotlight
The Romantic Treasures of the Pierre Collin L…
Some 300 books form the collection of Romantic illustrated books…