The Collection of Marie Bell: A Woman of the French Art Scene

From the theater to illustrated plates, Marie Bell's life reflects a time when artists of all kinds performed together. 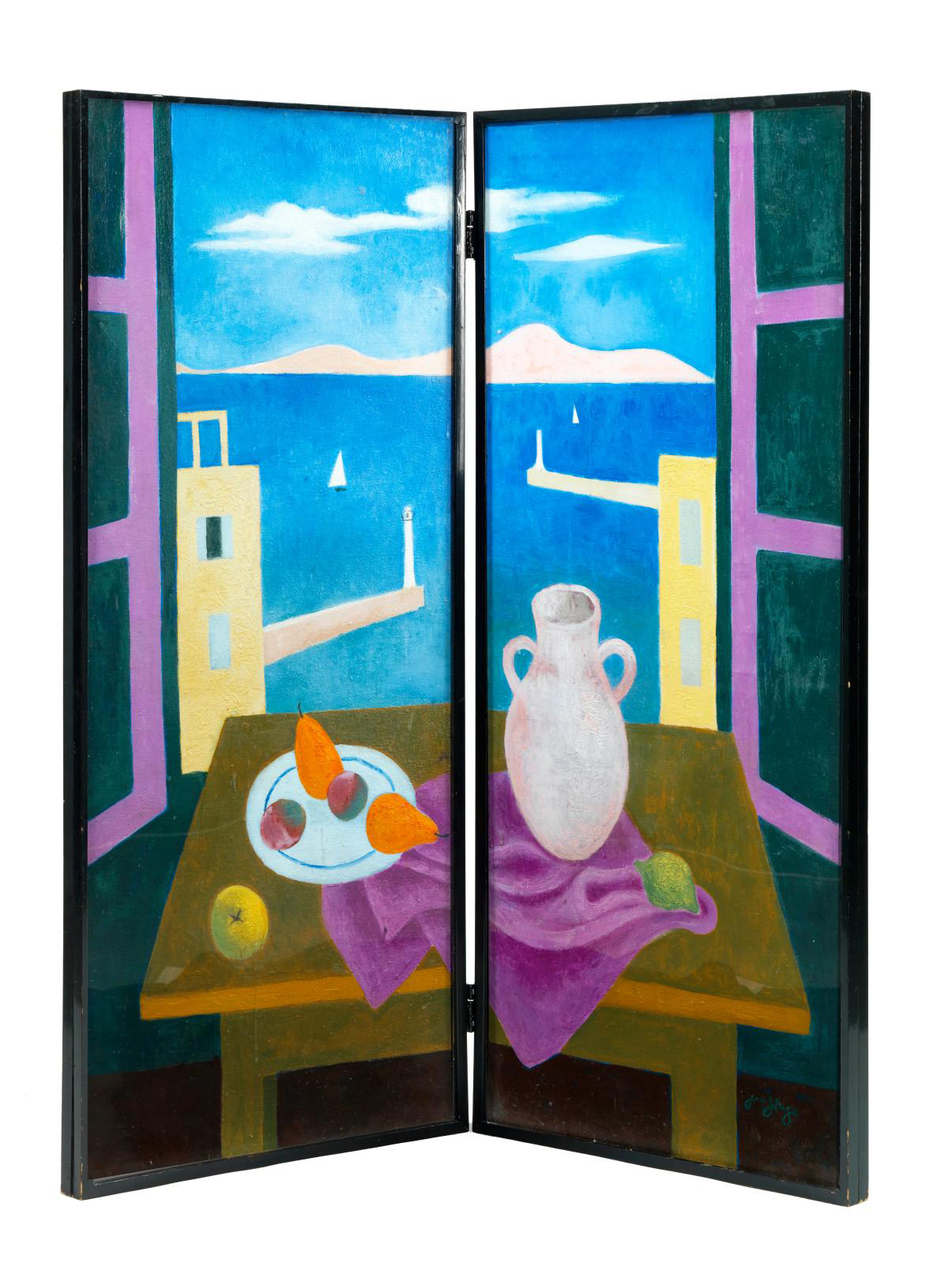 Marie Bell, whose real name was Marie-Jeanne Bellon-Downey, was a child of the 20th century born on Christmas Eve, 1900. She finally left the stage in 1985. She blazed through this period rich in artistic invention, participating in the birth of cinema—first silent movies, then the 'talkies'— and becoming a well-known figure on the stage. A stalwart of the Comédie-Française at the age of 21 (France's only national theater founded in 1680), she became a member in 1927, then an honorary member in 1948. She played the main roles in the classical repertoire, and her performance as Phèdre made history. With a passion for masterpieces of the stage, she used "her golden voice, warmth and dramatic intensity to embody tragic roles" (Christine de Rivoyre, Le Monde, October 1951), while also receptive to plays by the contemporary writers she knew, many of whom were her friends. A secret treasure nourished by fifty years of artistic encounters, her collection and library are about to be unveiled to the public. It will take more than three sales to raise the curtain on this fascinating ensemble.

Evoking the Theater
The auction house asked Jean-Jacques Aillagon to write the preface to the catalog in a nod to another Minister of Culture, André Malraux, who, as a close friend of Marie Bell. In 1963 Malraux wrote: "Seeing Marie Bell in Phèdre is a unique opportunity for anyone who truly wants to experience French genius" (autograph note on a visiting card, €300/400). Mr. Aillagon's preface pens a tribute to this great figure of the entertainment world by painting "the portrait of an extraordinary artist" whose literary and artistic memories reveal "a fascinating picture of the vibrant world in which she lived". While the theater loved her as a tragedian, the movie world had other roles lined up for her. In 39 films made alongside actors like Raimu, Fernandel, Louis Jouvet and Michel Simon, she sometimes played the femme fatale, sometimes the bourgeois lady. But it was at the Comédie-Française, between 1921 and 1953, that she made her mark on the history of the theater, as reflected in the sale presented here, notably with a rare set of gouaches by painter, set designer and decorator Jean Hugo, a close friend of Cocteau and the illustrious institution. In a dozen lots, these drawings, with estimates between €400 and €600, depict the great friendship between the Bell and Hugo. They include sketches of sets for various plays performed on the French stage, mainly Antony and Cleopatra in a translation by André Gide directed by Jean-Louis Barrault, with music by Jacques Ibert, for which Hugo designed the costumes and sets. For his friend, he also produced two magnificently sunny bouquets of flowers (€1,000/1,500 and €2,000/2,500), sent her tender, colorful greetings cards and made two screens estimated at €20,000/30,000 and €10,000/15,000 respectively. The first is a slice of blue sky evoking the Mediterranean she loved so much and where she lived part of the year with her husband, the actor Jean Chevrier. She kept it in her apartment in Monaco, as well as the one showing her as Phaedra, the Queen of Spain and the muse of La Nuit de mai. This is also a two-leaf work with double-sided panels (122 x 49 cm/48 x 19.3 in each) drawn in pastel.

A Strong Temperament
In 1943, Paul Claudel directed her in Le Soulier de satin (The Satin Slipper) alongside Jean-Louis Barrault, Madeleine Renaud and Pierre Dux. In May 1951, he dedicated a copy of the text to the actress enriched with 58 illustrations by Yves Brayer (€1,000/1,500) with these words: "To Prouhèze, the prow and main mast of this ship we launched together on the ocean of passions." Marie Bell was a woman of strong character: the critics were unanimous on this point, too. She used her fame and freedom of movement to contribute the fight against the Occupation, later receiving the Légion d'Honneur from General de Gaulle for her commitment. During the 30 years (1956 to 1985) when she directed the Théâtre du Gymnase, she left her mark, opening it up to avant-garde plays as well as to the crime repertoire typical of the "Boulevard". It is no accident that it now bears her name. In 1966, the modern pieces she staged included Jean Genet's Le Balcon (The Balcony), directed by Peter Brook, and Le Cheval évanoui (The Fainting Horse) by Françoise Sagan. This woman of letters painted a picture for her friend humorously titled Phèdre prend sur service dans les P.T.T. (Phaedra Clocks in at the Post Office) (37 x 45 cm/14.6 x 17.7 in, €400/500). They met at the beginning of 1961 at the hairdresser's, and the actress immediately asked the author to write a play for her. This was to be Les Violons parfois... (Violins Sometimes), a dramatic comedy performed for the first time at the Gymnase on December 9, 1961.

Picasso: A Friendship Illustrated
The testimony of the friendship between the tragic actress and Pablo Picasso is wonderfully illustrated by the books enriched with his magnificent drawings. A decidedly quirky text, Le Cocu magnifique (The Magnificent Cuckold) by Fernand Crommelynck, was published in 1921 after its performance in Paris at the Théâtre de l'Œuvre in 1920. The play turns traditional comedy into absurdity; anguish embraces laughter and imbues it with tragedy. Unsurprisingly, the subject appealed to Marie Bell. The complete set of 12 brilliant engravings with wide margins accompanying the original edition in a slipcase is estimated at €30,000 to €40,000. The same goes for La Tauromaquia o arte de torear obra utilisima para los toreros de profesion... by José Delgado, alias Pepe Illo, printed in an edition of 263. This copy comes with a 4-page booklet containing 26 aquatints by Picasso. As we know, the text of the famous 18th-century bullfighter, who died "in combat" in 1801 in the Madrid bullring, was published in 1796 and was the first manual for bullfighters and aficionados. There is also Le Carmen des Carmen by Prosper Mérimée, published by Louis Aragon after Picasso embellished a 1949 copy with original drawings (€20,000/30,000) of bulls, bullfighters and beautiful Spanish ladies... one of whom strangely resembles the great actress.

And there are also the myriad words scattered here and there on lovingly framed greetings cards or as dedications in books, like little pebbles on the joyous path of friendship. As Jean-Jacques Aillagon points out, we find "all the great literary names of the time: Cocteau, Gide, Malraux, Sagan, Sartre, Aragon, Céline—the pre-war Céline—, Claudel, Genet, Mauriac, Tardieu and Elsa Triolet." They range from the "admiration and affection" of André Malraux, inscribed under an ink drawing by the Japanese artist Sofu Teshigahara (€500/600), to the tender "My dear Armida, my beautiful Marie, for your birthday I give you this portrait of a "Lézard de Fourques: your Jean" (colored pencil drawing, 26 x 23 cm/10.2 x 9 in, €600/800) written by Cocteau, faithful friend and lifelong supporter, for whom she played the role of the amorous sorceress in his Renaud et Armide, with sets designed by another close friend, Christian Bérard. In a one-page eulogy dated 1942 and titled "Un fantôme au soleil" ("A Phantom in the Sun"), the poet with the starry signature wrote: "Marie Bell resembles those marvelous parasols that receive sun and give shade. But this shadow that makes her as pale as a nocturnal object is illuminated by a light from within." Eternal friendship indeed.

Jean Hugo and the World of the Theater
In no. 624 of Arts-spectacles of June 1957, Jean Cocteau evokes Jean Hugo, who "mingled his almost monstrous calm with the tumultuous companies of our youth. He was and remains the very picture of this perfect modesty of illuminators, in whom everyday truth prevails over the decorative graces." Jean Hugo met Marie Bell in 1938, when he was asked by Édouard Bourdet, administrator of the Comédie-Française, to create the sets for Ruy Blas. Victor's grandson thus became part of the long family genealogy. It was then a question of celebrating the centenary of the play. The young Hugo was impressed by the power of her gaze and sensed that she was a great tragedian. Raised in an intellectual environment, nourished by his encounters with the Surrealist milieu, close to Cocteau and literary circles, he was regularly called on by the theater. In 1932, after his divorce from Valentine Gross, he moved away from Paris to an old farmhouse near Lunel to devote himself more to his painting. However, he agreed to continue to work for the theater, producing the sets and costumes for the ballet Les Cent baisers (The Hundred Kisses) at Covent Garden and especially for the French, accompanying Marie Bell in Ruy Blas and Phèdre, in 1942, and Les Nuits, a show staged by the actress on poems by Alfred de Musset. Talking about the creation of Phèdre, directed by Jean-Louis Barrault, he said: "I attended the first act on the stage. Marie Bell had the shade of a pearl among blood-colored draperies." He dressed her for the last time in 1945 for Antony and Cleopatra; in the meantime, they had developed a solid friendship.

The Roger Passeron Collection to be Sold at Drouot

The Creuzevaults Chose Ernst, Picasso and Richier
Newsfeed
See all news
Paris: Open House at the Père Lachaise Workshops
Preemption: Romanelli's "Justice" Is Heading the Musée du Grand Siècle
A Diamond Cross Pendant Fetches €673,100 at Drouot
London: Will the "Portrait of Omai" Enter the Collection of the National Portrait Gallery?
Not to be missed
Spotlight