Illustrious families have succeeded each other at the Franquenot Chateau, an imposing yet understated residence in the département of La Manche. A new chapter begins with the sale of its contents. 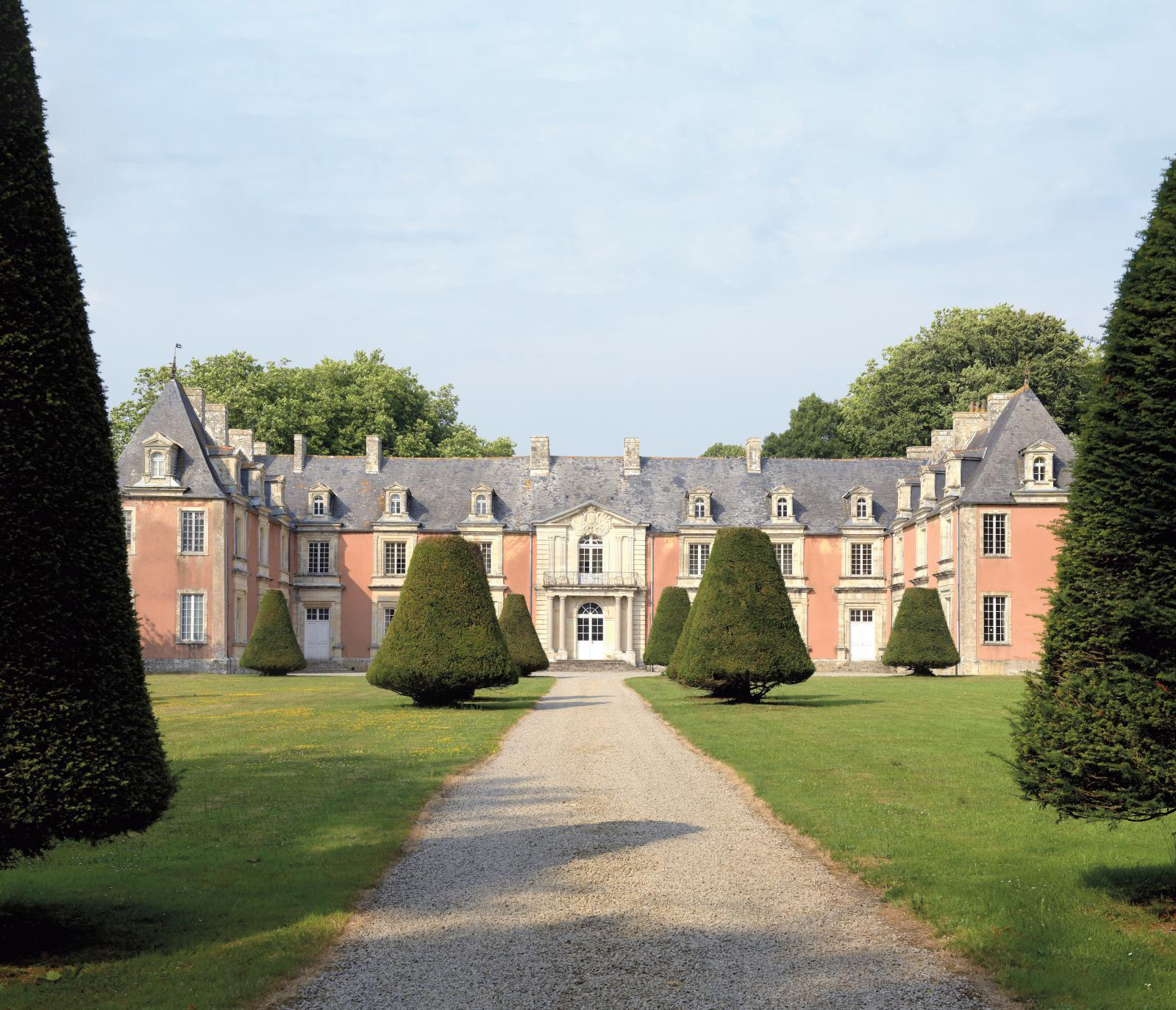 At the end of a 12-hectare (29.6 acre) estate stands a building consisting of a central section (a corpus de logis) adorned with a pediment and two pavilions forming a vast cour d’honneur or courtyard that has survived to the present day. In the second half of the 17th century, Robert de Franquetot decided to build in order to bestow opulence and majesty on his domain of Coigny, which had been raised to the rank of a comté by Louis XIV. As Dukes of Coigny, the Franquetots became one of the most powerful families of the French aristocracy, providing the king’s armies with several lieutenant-generals and two marshals. The first section of the château, which includes a chapel, was built in the spirit of the French Renaissance, and was followed by a second identical section between 1735 and 1739. The façades, roofs and former stables are now listed as historical monuments.

A Beautiful Captive
In the sale staged by the Daguerre Auction House, some pieces evoke the first patrons. Leading the way is a portrait of French King Henri IV by the circle of the painter Jacob Bunel (€1,500/2,000)—for it was during his reign that Louis Guillotte became Lord of Franquetot. Next up is a linen hanging in pure silk embroidered with the arms of the Coigny family from the second half of the 17th century (260 x 174 cm/102.4 x 68.5 in), which is estimated at €1,500/2,000. Among 250-odd lots in the sale, a pastel of the poet André Chénier after Charles-Louis Müller (€400/600) again illustrates the family history. One of François de Franquetot de Coigny’s grandsons, Augustin Gabriel, Comte de Coigny (1740-1815), had a only child, Aimée, Duchesse de Fleury. She became André Chénier’s future prison companion and muse during the French Revolution as the poet’s Jeune Captive (Young Captive). The residents of the time remembered the beautiful blonde girl who often stayed at the château.

In 1865, after seven generations the Franquetot family died out along the "male line." Having married in 1822 Henrietta Dalrymple-Hamilton, who hailed from a noble family in England, the third Duc de Coigny, brought the château and its land under the British flag. His two daughters were the last representatives of the Franquetots, and in 1912, one daughter, the Lady Beauchamp, became the duke's heiress.

Want to receive news and updates about auctions?
Sign up for our newsletter
Kergorlay, Talleyrand-Périgord, Orlowski
Like many other monuments, the Château de Franquetot has been witness to the vagaries of French history, but escaped the destruction that sometimes occurred. During the Revolution, after the owners joined the Armée des Princes, several sales of the estate’s furniture were staged. When the vast residence passed into English hands, this prolonged the slumber of the sleeping beauty. Some of the Franquetot archives were transferred to England, where they are now in the University of Nottingham. The château was apparently always popular with a select circle of aristocratic descendants, who liked to spend their holidays there. In the mid-20th century, it returned to a French family with the Comtesse Emmanuel Alvar de Biaudos de Casteja, née Claude de Kergorlay (1888-1975). It is now occupied by a relative of the Talleyrand family, and more precisely a descendent of Clementine de Talleyrand-Périgord (1841-1881), granddaughter of the Princess of Courland, Duchesse de Dino. The latter was brought up in her grandmother’s château, in Sagan, Poland, where she met Count Alexandre Orlowski (1816-1893), whom she married in 1860. It is noteworthy, says Benoît Derouineau of the Daguerre Auction House, that “the interior of the château has been preserved intact. Few people knew about it because the owners did not open it up to visitors or any of the associations dedicated to historic French houses.”

Various mementos connected with the Talleyrand and Orlowski families will be up for sale. Collectors will be particularly interested in the provenance of a rare Chinese vase (€150,000/200,000: see below) and a wool and silk tapestry depicting a mythological scene with the Talleyrand family coat of arms on the borders (Aubusson, c.1720, €4,000/6,000). Some portraits depict illustrious forebears, including Dorothée de Courland (1793‑1862) after Joseph Grassi (€1,000/1,500), and Comte Orlowski (dated 1892, €3,000/4,000). Other lots are imbued with the spirit of 18th and 19th-century Central Europe, like a miniature of the Polish Prince Joseph Poniatowski (400/500 €), a heraldic pendant with a helmet flanked by two stag antlers (€2,000/3,000) and some officer’s swords. The craftsmanship of these artisans is splendidly illustrated by a magnificent cabinet secretary of c.1800 with a rolltop section containing niches and drawers (€3,000/4,000).

A Living Residence
The château was furnished and decorated in keeping with its historical spirit, but with a discreet subtlety. “This is a unique opportunity to see the interior furnishing as it was planned by the Orlowskis. It fits well with the house and some pieces are truly exceptional,” says Benoît Derouineau. A fine portrait of a princess of the royal blood in an embroidered gown and ermine mantle (€4,000/6,000) by the painter Pierre Gobert (1662-1744), who was accustomed to depicting prominent figures in Munich and at the court of Versailles, brings a graceful, playful note to this long history. Like a guided tour moving through the vestibule, kitchen, bedrooms, chapel, dining room and main salon, the catalog lists, room by room, the various objects, curios, furniture items and artworks furnishing the different spaces of a residence inhabited until only recently. A molded wood lintel and a Boulle marquetry wall clock with its console (€1,500/2,000) are among 15-odd pieces from the Louis XV period, not to mention, from the main salon, a kingwood veneer commode stamped by Pierre IV Migeon, one of the leading cabinetmakers of his time (€5,000/8,000). A cupid astronomer adorns a Louis XVI chased gilt bronze clock with a dial by Vanier (€4,000/6,000). Lastly, we find some fine 17th-century Dutch pieces, including a rosewood and ebony veneer cabinet decorated with foliage, masks and columns (€6,000/8,000): “an extraordinary, majestic object” according to Benoît Derouineau.


For many years, the main salon of the Château de Franquetot housed two remarkable pieces. One is the Portrait of Madame Champcenetz, née de Nyvenheim de NieuKerque (1742-1805), by Jean-Baptiste Greuze. This work, dated 1770, whose commentators often emphasized the boldness and fine finish of its composition—“her bosom swells in its white garment” (Louis Hautecoeur, Greuze, 1913)—is well-known, and was in the collections of Jacques de Reiset and later Count Henri de Greffulhe. The life of Madame Champcenetz, nicknamed “La Belle Hollandaise” (“the beautiful Dutchwoman”), reads like a novel. With two marriages, the second to the Marquis Champcenetz, and two divorces, this prominent woman at the court of Louis XV, who was granted a royal pension, was a militant of the royalist cause during the French Revolution and the Consulate. As well as providing financial support, she spied for the English and the Dutch. Though arrested for her counter-revolutionary activities on several occasions in 1794 and 1802, she escaped the guillotine.

From around the same time, this magnificent large Chinese porcelain vase (h. 74 cm/29.1 in, €150,000/200,000) bears witness to the political exchanges between the European powers and Asia. It comes directly from Talleyrand’s grand-nephew, Alexandre Edmond de Talleyrand-Périgord (1815-1894), Duc de Dino, the second son of Edmond de Talleyrand-Périgord and Dorothée de Courlande. As a captain in the Foreign Legion in 1855, he took part in the capture of Sebastopol during the Crimean War. The vase features a procession of foreigners bearing gifts on horses, lions and beasts from Chinese mythology. The theme of receiving delegations appeared during the reign of Jiaqing (1796-1820) of the Qing dynasty. The neck of the vase, with a yellow background, is beautifully decorated with fish, bats, lotus flowers and dragons, expressing through homophony the concepts of happiness, auspiciousness, wealth and celebration. The turquoise enameled underside bears the six-character mark of the Jiaqing period.
ENTIRE FURNITURE OF THE CASTLE OF FRANQUETOT
- 50250 Montsenelle
Daguerre
Info and sales conditions
Catalogue

Jiaqing, Greuze and Gobert Vases: Treasures from a Château

A set of three collections of projects coming directly from Pierre-François...