In the heart of Finistère, in Brittany, the Château de Trévarez is a fine reminder of the Belle Époque, though one scarred by World War II. Built by French politician and diplomat James de Kerjégu, this enchanting place is slowly rising from its ashes. 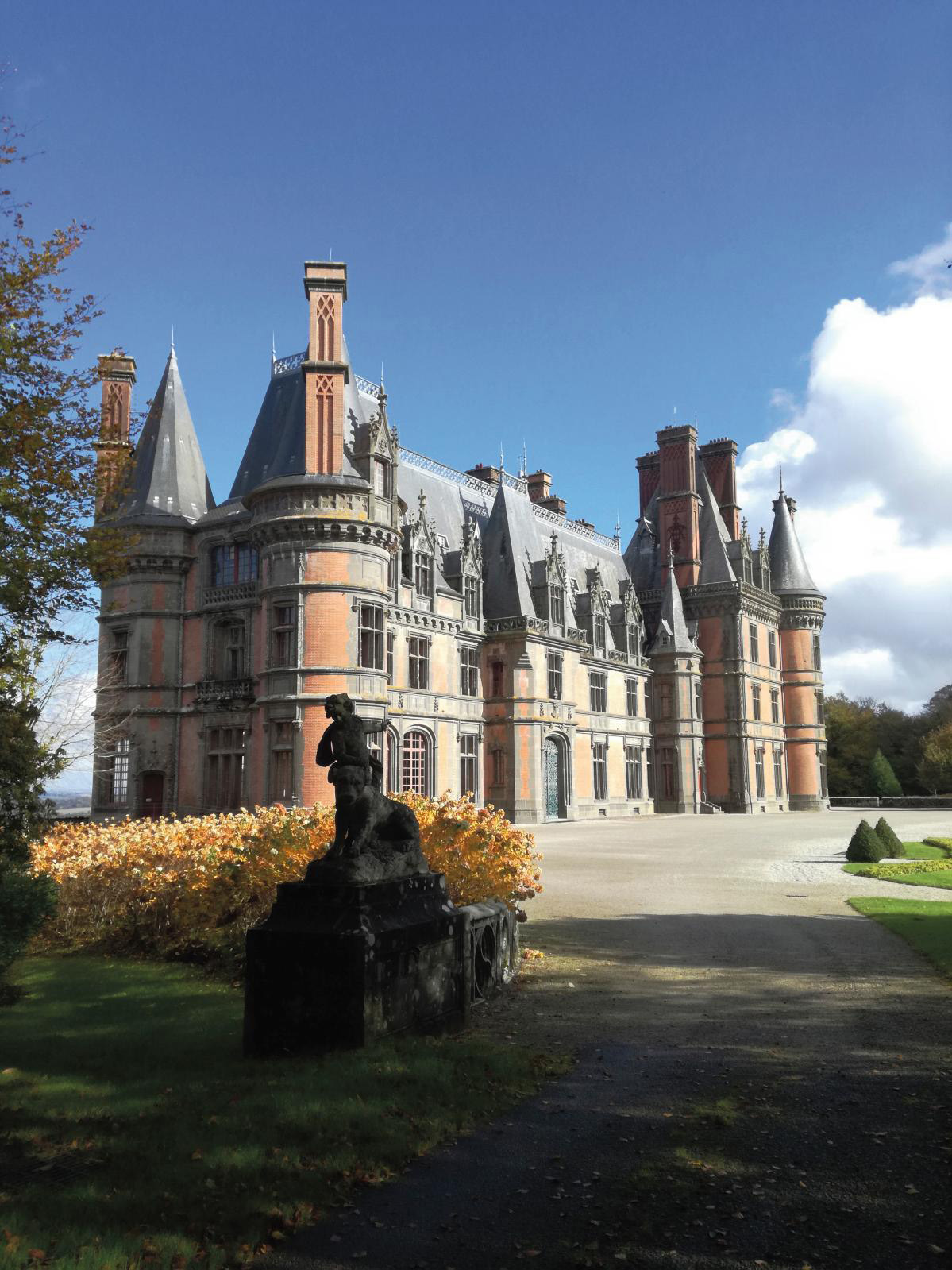 Whether emerging as though by magic from the winter mist or glowing in springtime with the red, pink and orange blooms of thousands of azaleas, camellias and rhododendrons, this imposing edifice seems the stuff of fairy tales. Built at the turn of the 20th century, surmounted by high Renaissance-style chimneys evoking the châteaux of the Loire, decorated with neo-Baroque twisted columns and neo-Gothic pinnacles, spires and gargoyles, the Château de Trévarez is a glorious combination of styles.

Bought by the General Council of Finistère in 1968 and classified as a historical monument in 2009, the estate, along with the Abbaye de Daoulas, the Manoir de Kernault, the Abbaye du Relec and the Château de Kerjean, is one of five sites grouped together by Chemins du Patrimoine en Finistère, the EPCC (Public Cultural Cooperation Establishment) in charge of managing the venue. Each year, artists are invited to interact with the architecture or landscape, providing an opportunity for temporary exhibitions—like the one featuring filmmaker François Royet and painter Charles Belle, nine of whose floral paintings are now on show throughout the château—or permanent installations like Shigeko Hirakawa's glass balls in a pond (Bassin de la Chasse), and Eva Jospin's rocaille grotto.

Trévarez arose from a dream: that of James de Kerjégu (1846-1908). President of the General Council of Finistère between 1895 and 1908, the politician was also a key figure of the Paris bourgeoisie, who gained a fortune when he married Fanny Laure von Haber, the daughter of a Berlin banker. When his father died, he inherited land in the Montagnes Noires near the Monts d'Arrée. Kerjégu wanted to turn it into a vacation resort where he could entertain friends during the hunting season. In 1893, he asked the architect Walter-André Destailleur (1867-1940) to design a Belle Époque-style château complete with park. This 210 acre/85-hectare area—now labeled "Jardin remarquable" and "Jardin d'excellence" for its 700 camellia varieties—includes a vegetable plot, an orchard, a regular garden, an English-style garden, an Italian garden, another picturesque garden and a Japanese garden.

All Mod Cons
Standing on steeply sloping land, the "pink château"—so-called for the color of its brick, which contrasts with its gray Kersanton stone—was started in 1897 after four years' excavation work. "It was the age of iron and Gustave Eiffel. The building's structure is entirely in metal, from the floors to the frame, which is quite rare for a private residence," says Noélie Blanc-Garin, exhibition manager at the estate. "Inside, it was equipped with every modern convenience, including central heating. An electric plant was installed in the stables in 1905 for the lighting, telephone, elevator and so on."

Proudly overlooking the Aulne Valley, the château consists of the main building with staterooms, a library, a dining room, twelve guest rooms and twenty-odd rooms for the servants, as well as an east wing housing Kerjégu's apartments on the first floor and his daughter Françoise's on the second. Françoise married the Marquis Henri de La Ferronnays and inherited the estate upon her father's death in 1908, shortly after the house was completed. She stayed there only occasionally, until the late 1930s.

Trévarez then went through some dark times. The château was severely damaged during the Second World War. After being requisitioned by the German Army, it was bombed on July 30, 1944, by the Royal Air Force, and the roof of the western wing was gutted. Abandoned for fifty years, the estate was saved at the end of the 1960s by the Departmental Council of Finistère. The park opened to the public at the start of the following decade, but the château only 20 years later, after the roof had been completely renovated (1991-1992).

Poetic Ruins
"The château is huge: it has nine floors, from the basement to the attic. It was impossible to envisage a comprehensive restoration program. It is an endless work site, where things are achieved one step at a time. For 12 years, an active policy has been pursued to preserve the estate and enhance its standing," says Noélie Blanc-Garin. "In 2010, we created an interpretation circuit that uses texts, photographs, films and archive material to provide a picture of the site and help visitors imagine what it might have been like in James de Kerjégu's time."

The château, it is clear, has lost much of its magnificence. A great deal of its decoration has been destroyed or painted over. Some spaces have been voluntarily kept "as is", which is all the more moving. One example is the main drawing room, ravaged in 1944, which has been exposed for the last 10 years. Over a height of several levels—the floors having collapsed during the bombing—the space is a real architectural "écorché" (exposed architecture), revealing the metal structures and the remains of a neo-Renaissance coffered ceiling. Miraculously, the painted paneling adorning the walls has survived, and the fresh delicacy of its 18th-century-style floral motifs makes a striking contrast with the raw appearance of the ruined surroundings.

The main drawing room currently houses a monumental charcoal artwork by Charles Belle: Confiés à la forêt (Given Over to the Forest, 2016), which the artist created outdoors over the course of three winters while suffering from depression. Recorded by the filmmaker François Royet—the film is presented in the stables—his "performance" gave rise to a work that takes on a singular dimension here. The artist's pain, the marks of passing time and elements in his drawing echo the wounds of the estate.

Art Nouveau Rediscovered
Elsewhere, new rooms have gradually opened to visitors, after restoration work encouraged by major rediscoveries. In 2019, one guest room regained its original furniture—a cane bed, chair, dressing table and bedside table in Louis XVI style—restored by the de Ganay family, heirs to the Kerjégus. Nearby, a bathroom with two small "pools" dug into the floor, like miniature baths, illustrates James de Kerjégu's primary concern: providing his guests with every comfort.

The bedroom and bathroom in the host's private apartments were recently renovated. In 1903 the famous Parisian Art Nouveau dealer, Siegfried Bing, was commissioned to design the interior of these two rooms. The bedroom's built-in wardrobes and woodwork and the bathroom's ash panels and ceramic tiles were intact, but the furniture had disappeared. It was identified in one of Bing's reference albums, now in the Decorative Arts Library in Paris: "In 2007, a carpenter from Châteauneuf-du-Faou contacted us saying he knew where it was," says Noélie Blanc-Garin. "A private individual had bought part of it at auction in 1970."

Works by Georges de Feure—the bed and bedside table in Cuban mahogany—were bought by the département. Now restored, they are classified as historical monuments, like the interior decoration. There is no trace of the chair, armchair or pedestal table, but it is not impossible they will turn up one day. At Trévarez, what escaped destruction was sold, and many treasures have probably stayed in the region. The next few years could thus hold further surprises for a place that has certainly been battered, but has preserved what truly matters: its soul.

Art Price Index: Champagne!
Not to be missed
Cultural Heritage