Seven years after reopening to the public, the Château de la Mercerie, the work of two eccentric brothers, is still undergoing its metamorphosis. Here’s a look back at its history. 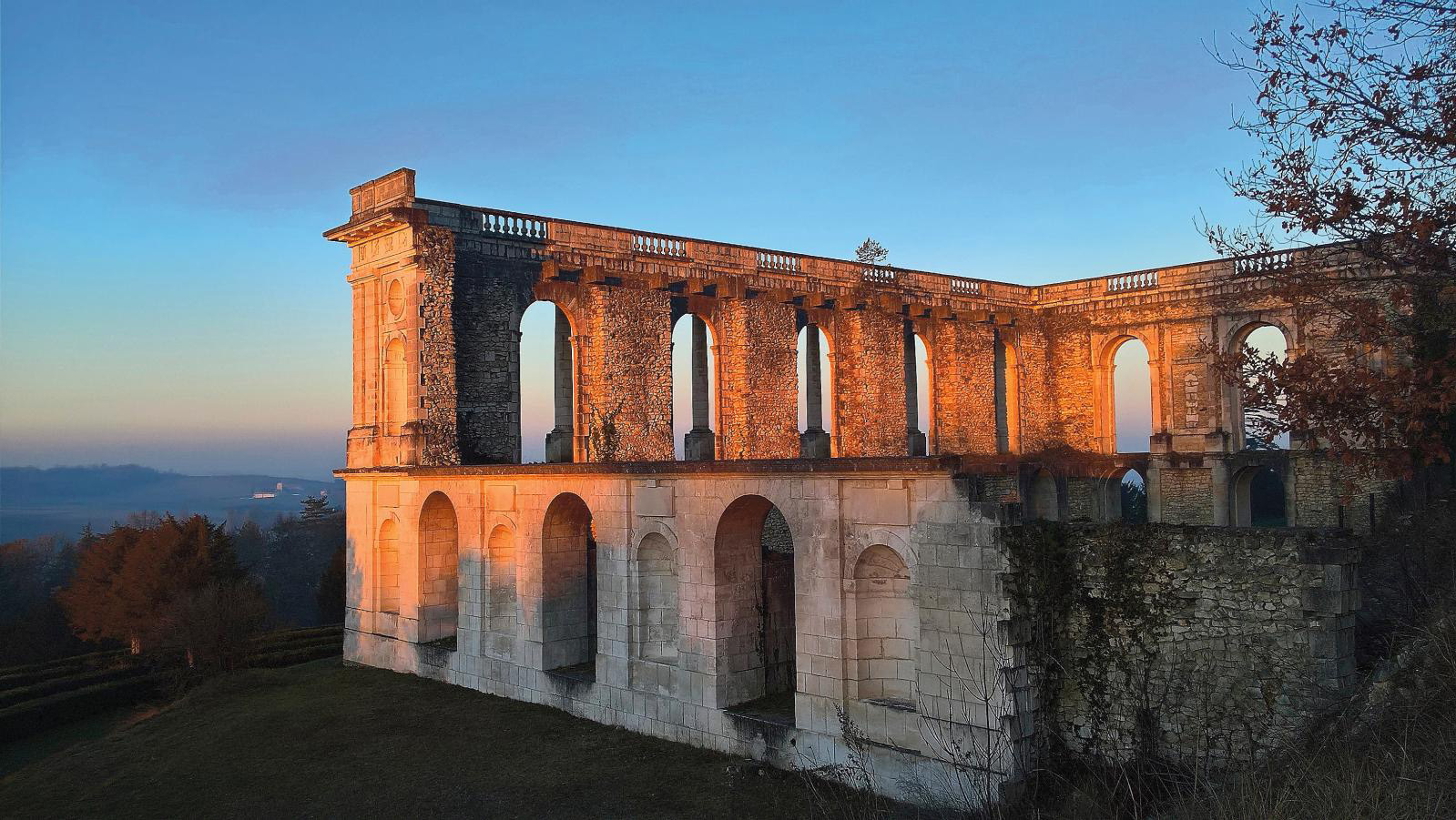 Two reclusive, art-loving brothers holed up in a château amassing countless works: the Bird Brothers, who lived on the Moulinsart estate before Captain Haddock expelled them, from Tintin immediately come to mind. But that is where the similarity ends: unlike the shady antique dealers in Hergé’s The Secret of the Unicorn, the Réthoré brothers were never involved in criminal activities. Their mad streak took the form of building an unlikely château in the middle of the Charentes countryside and gradually turning it into a private museum. An undated black and white photograph shows two handsome men walking down a path lined by boxwood hedges. One wears a dark suit, the other a safari jacket and hat. Both are tall and serious-looking. In the background stands a classical style façade in white stone with round-arched windows opening onto empty space. The men are Raymond and Alphonse Réthoré posing in front of their château—their “folly”, as it was often called. Born into a well-to-do Anjou family in the 1900s, their father died when they were small. Their mother then married a doctor who, in 1924, bought the Mercerie manor, around 9.3 miles from Angoulême, as well as 600 neighboring hectares. Both mother and stepfather died within the next two years and the brothers found themselves lords of the manor at the ages of 26 and 21.

Bombast and Blue Treasures
From the 1930s to the late 1970s the Réthoré brothers continuously beautified and expanded their house. Alphonse personally drew up the plans for a stately château abutting the original troubadour-style house. The extension had a neoclassical façade as long as two soccer fields (220 meters/722 feet)—so big it was listed in the Guinness Book of Records as the longest ever built in the 20th century! “Students in their first year at Beaux-Arts may have drafted plans on the same scale as an exercise,” wrote historian Thierry Groensteen in his book about the astonishing fortunes of La Mercerie, “but it is utterly amazing to think that everything we see was drawn up, designed, planned and built by a man who had only learned about architecture in books and had never built anything before.” While Alphonse was busy overseeing the worksite, Raymond traveled around Europe looking for antiques. From Lisbon to Rome, Madrid and London, he visited specialized companies and auction rooms. The brothers gradually built themselves a veritable museum filled with statues, furniture, old books, busts, paintings, vases, columns, marble mantelpieces and more. Skeptics derided it as a mish-mash. Some connoisseurs ridiculed the brothers’ lack of discernment, saying that the whole was more of a hodgepodge than a real art collection. “The diversity of provenance, extremely uneven artistic or historic value, amount of damaged works and number of replasterings and repaintings, usually clumsily carried out, defy analysis,” wrote a Historic Monuments inspector after their death. La Mercerie never became famous outside of Charentes—even though the Réthoré brothers owned France’s most beautiful collection of azulejos (a type of glazed colored tile traditionally used in Spanish and Portuguese buildings): 32 imposing tiles six meters (nearly 20 feet) high and 2.6 (81/2 feet) wide. Made at the Aleluia factory in Aveiro and installed in the 1960s, they depict landscapes and seascapes in shades of blue by Claude Lorrain, Hubert Robert, Eglon van der Neer and Joseph Vernet. Two panels, one of which is in polychrome, feature the Biblical story of Susanna surprised by two old men at her bath. “Were the bachelor brothers projecting themselves in the figures of these two men attracted to inaccessible beauty?” Thierry Groensteen wondered.

The End of a Dream
In the 1950s Alphonse and Raymond opened their château to the public. Here, a wall was missing; there, capitals had not yet been carved. One room just had a cement floor and a plastered ceiling. It did not matter. The “Versailles of Charentes” looked impressive. “Too bad André Breton didn’t live to see this!” playwright and poet Fernando Arrabal is said to have exclaimed when he visited in April 1976. The brothers had three revenue streams to pay for their surrealist dream in stone: rent from their estate’s three tenant farmers, profits from a small company they created with exclusive rights to import dry-cleaning machines from Italy, and Raymond’s salary as a member of parliament since 1936. His opposition to the OAS during the Algerian war nearly led to the destruction of La Mercerie when members of the group tried to blow up the château on the night of August 23,1961. Fortunately, gendarmes (police) foiled the plot. But unpaid bills piled up, despite the brothers’ ascetic lifestyle: for a long time they had no running water. The construction project ended in 1975. Raymond lost all his money in an intensive cow-farming scheme that ended in a pile of debts. After the younger brother died in 1983 and the elder in 1986, the property changed hands several times and gradually fell into ruin. The art works were auctioned off in 1987 and 1988. The château was bought by antique dealer Bernard Steinitz, who sold it to a real estate company in 2008. Aware of its tourist potential, the town of Magnac-Lavalette-Villars, under the impetus of mayor Didier Jobit, rented the property in 2010 for the symbolic sum of one euro year after signing a 75-year lease. A heritage association was created and the local population mobilized. Every month on “volunteer days”, around a hundred people turn out to secure the site, build fences, maintain the grounds, redo the wiring, repair the door and window frames and mend the masonry. In 2012 the château was listed as a historic monument “for the unique character of this work by two quixotic brothers with delusions of grandeur”. The next year, La Mercerie opened to the public—and they came. “We get 25,000 visitors a year and that figure is rising by a thousand a year,” says reception and communication director Jean-Claude Brun. “This year, a huge number of people came even though we’re only open for four months.” There is no shortage of projects to breathe new life into the site, from installing kitchens for events (weddings, seminars and conferences) to planting an orange grove and renovating apartments to accommodate sculptors invited for artists' residencies. In a corner of the estate, 70 tons of marble are waiting to cover the floors, but the heritage association has decided not to finish the part of the façade looking onto empty space, where work stopped in 1975—for the very incompleteness of this odd place is what makes it so incredibly charming: a non finito in the form of a total work of art.

At Château Rambouillet: Shells and an Exclusive Estate
Not to be missed
Cultural Heritage