Nearly a century after being dismantled and crated, the decor of the Chancellerie d’Orléans, demolished in 1923, has found a new life in the rooms of the Hôtel de Rohan in Paris, the headquarters of the Archives Nationales (French National Archives)—a miraculous rescue. 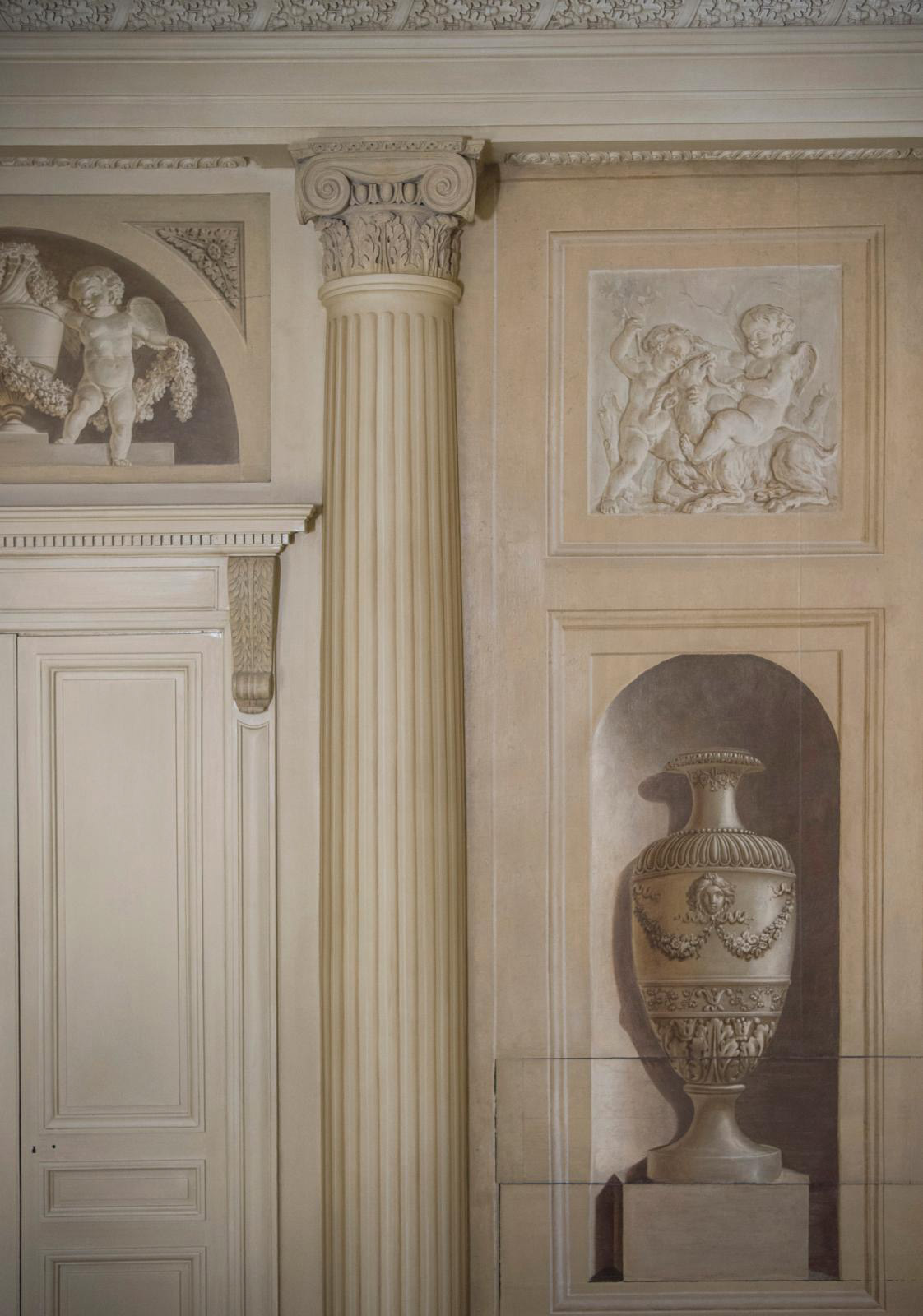 With just a few weeks to go before the opening, the work of reassembling the decors of the Chancellerie d’Orléans is in full swing. Amidst the racket of jackhammers, screwdrivers and sanders working on the marble floor of the grand staircase, it is a wonder to glimpse, through the metal scaffolding that occupies the entire room, the marvelous ceiling painted by Antoine Coypel in the early 18th century, with dazzlingly fresh colors. Le Triomphe de l’amour sur les dieux de l’Olympe (The Triumph of Love Over the Gods of Olympus) is the kind of light, graceful painting at which Coypel, the Regent's favorite painter, excelled. The iconographic program unfolding across the great salon’s ceiling revolves around adorable winged putti mischievously grabbing Mars's shield, Jupiter's trident and Diana's quiver. Seen up close in the harsh glare of spotlights, cracks that are imperceptible from the floor can be made out, like the seams of a garment whose different pieces have been put together. Barely visible, these are the only traces of the extraordinary adventure of the decors of the Chancellerie d’Orléans, an hôtel particulier (urban townhouse or mansion) built between 1703 and 1708 on the edge of the gardens of the Palais-Royal. It was designed by architect Germain Boffrand and torn down in 1923.

A Brief History of the Building
The demolition must be understood in the context of the transformation of Paris by Haussmann's successors at a time when automobiles were quickly displacing horses and carriages. In 1905, Prefect Hénard even cooked up a plan called “La Grande Croisée de Paris” (“The Great Crossing of Paris") that would have cut the Palais-Royal in half! The Commission du Vieux Paris (Commission for Old Paris), created in 1897, sounded the alarm, sparking an outcry. The City put the project on hold. However, it did not give up on the idea of transforming the neighborhood, where the Banque de France, cramped in its historical premises, would soon fill the lot between the rue des Bons-Enfants and the rue de Valois, where the Chancellerie d’Orléans stood in the way.

In 1707, the duc d’Orléans offered the noble residence to his mistress, Marie-Louise Le Bel de La Boissière de Séry, known as Mademoiselle de Séry. Afterward, it had many owners and met with various fortunes. The three-story mansion had a linotype workshop on the first floor, but kept the decorations entirely redone by Charles de Wailly between 1764 and 1772 in the neoclassical style, which became the young architect’s specialty. Modeled after Roman palaces, the antechamber features Gabriel Briard’s ceiling painting Les Travaux d’Hercule (The Labors of Hercules). The dining room combines mosaic pilasters, imitation porphyry medallions and ornate voussoirs decorated with gilded stucco, while the ceiling in the room of the Marquise de Voyer, who, with her husband, commissioned the makeover, features Louis-Jacques Durameau’s masterpiece Le Lever de l’Aurore (The Rise of Dawn). The grand salon was the height of lavish decoration. Three huge, arched windows looked out onto the garden, its arcades mirrored, its overdoors depicting Les Quatre Éléments (The Four Elements) by Pajou and its ornate cornice with garlands of flowers setting Coypel's ceiling off to its best advantage.

Fragments of a Demolition
In January 1914, Baronne Thénard, the owner, had the Chancellerie d’Orléans listed as a national monument. It, along with the Hôtel de Voyer d’Argenson, was the first building to come under the protection of the recently passed landmarks preservation law. But shortly afterward, it was delisted by the City of Paris in order to pursue its urban renewal plan, and the building fell to the wrecker’s ball in 1923. Fortunately, the École des Beaux-Arts got the City to salvage the outstanding décors so that they could be put up again elsewhere. “They were supposed to be reinstalled in the new premises of the Banque de France the following year,” says heritage and archives director Arnaud Manas.

The project was forgotten during the tumultuous 1920s and 1930s and the Second World War. Ceilings cut up into pieces, cornices, consoles, friezes, and garlands attesting to the artistic genius of their time slumbered away in crates stored in a room in the Paris suburbs for eight decades. Heritage preservation groups started campaigning and every once in a while, the press lamented the terrible waste. But reinstalling the décors was too expensive, too complicated and too burdensome, and finding a place to put them was almost impossible. “We looked all over Paris,” says Mobilier national heritage curator Emmanuel Pénicaut, who coordinated the operation. “We thought of the Musée Carnavalet, the Louvre, Saint-Cloud, the Châteaux de Sceaux, Vincennes and other places until a private citizen suggested setting them up on the ground floor of the Hôtel de Rohan.”

By happy coincidence, in the early 2000s, the Archives Nationales moved to Pierrefitte-sur-Seine, freeing up the building Pierre-Alexis Delamair designed in 1705. “Both mansions were built between a courtyard and a garden at the same time and had so many similarities that the solution was self-evident,” says Bertrand du Vignaud, who has been passionately interested in the fate of the Chancellerie d’Orléans for decades. He drummed up support from American benefactors in the World Monument Fund (WMF), of whose European branch he is president.

The project could move forward once the funding was secured. The Ministry of Culture, Banque de France and WMF split the €15-M bill, which included restoring the Hôtel de Rohan’s original layout, disfigured when the Imprimerie Nationale (the French National Printing Press) moved there in 1808; developing advanced engineering technology to handle the decorations and hang the ceilings; and, of course, cleaning the various parts stored on layers of straw in 104 wooden crates precisely labeled by Banque de France architect, Alphonse Defrasse, who in 1923 had taken care to keep a very helpful "dismantling journal”.

“Putting the 10,000 pieces of the puzzle back together again was a unique experience,” says restorer Cinzia Pasquali, who coordinated the work of approximately 60 skilled artisans and anxiously followed the complex reassembly of the three large ceilings, two of which had voussoirs. Unsurprisingly, there were plenty of stumbling blocks along the way. For example, it was discovered that the height of the walls of the Hôtel de Rohan and the Chancellerie d'Orléans did not match—the floor had to be lowered by 40 centimeters. It was also necessary to "reintegrate a gap" to fill in a missing piece of sky.

Re-furnished by the Mobilier National (the National Furniture Storehouse), which has recovered four remarkable armchairs and a console made by cabinetmaker Mathieu Bauve based on Charles de Wailly’s drawings, the new Chancellerie d'Orléans is an outstanding example of the decorative arts in 18th-century France. For those who know the history of the decors rescued from oblivion, the rebirth is overwhelming.

Big Plans for Chaalis, the Sistine Chapel of the Oise
Not to be missed
Cultural Heritage