After a year’s postponement, on May 22 the Bourse de Commerce (Commodities Exchange) has finally had its moment. We made an eagerly awaited visit to the Pinault Collection’s new Parisian home. 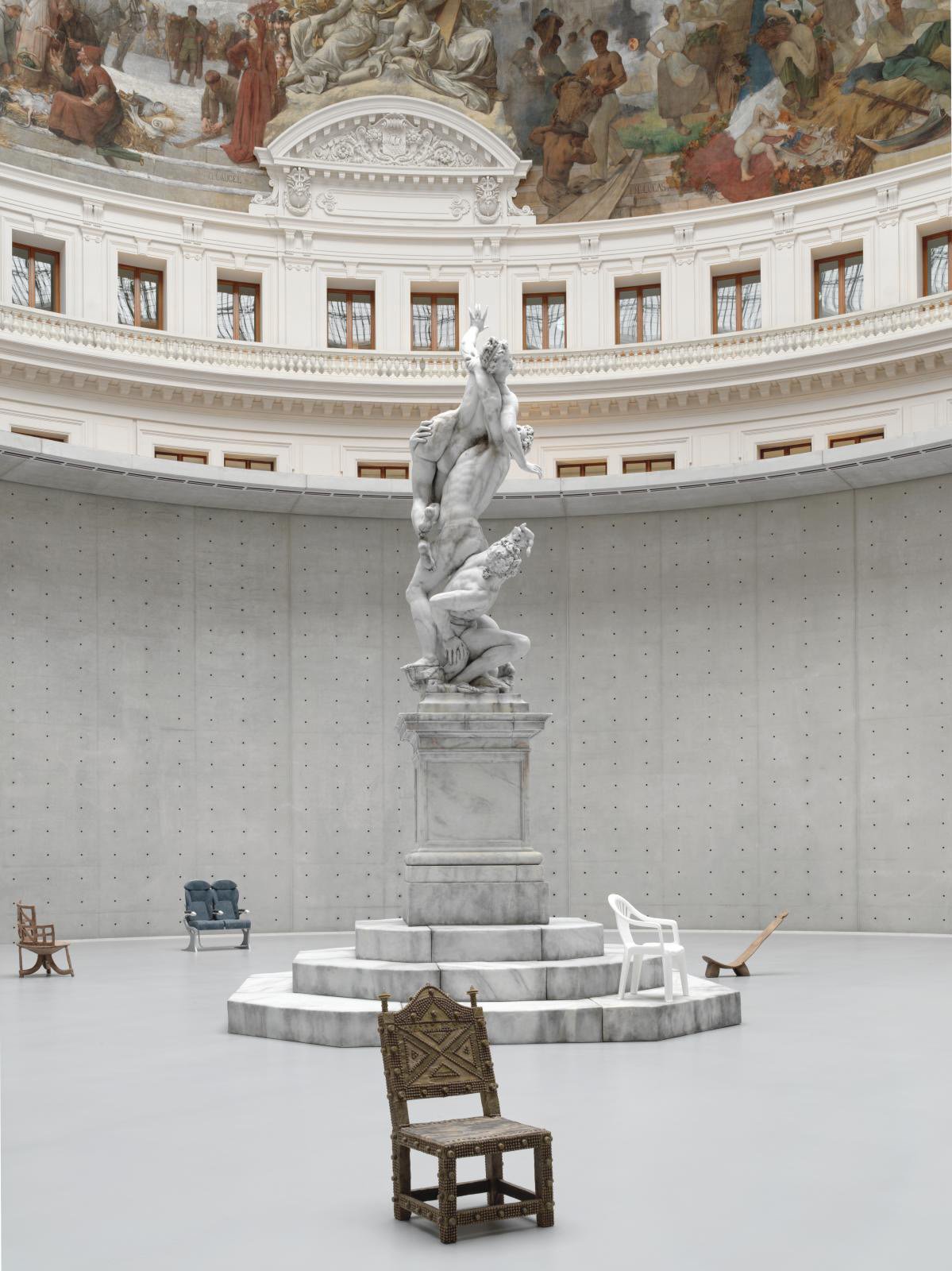 On-and-off showers soaked the forecourt of Les Halles, where three flags, as gray as the sky, were flapping in the wind. Their light, seemingly liquid fabric looked like molten metal in the chilly air. Halfway between the Louvre and the Centre Pompidou, the Bourse de Commerce looks like an ancient UFO. After a three-year facelift, it is the new public home of a private passion, that of French billionaire François Pinault (editor's note: founder of the companies Artémis and Kering) for contemporary art, whose collections have been on view in Venice at the Palazzo Grassi since 2006 and, later, at the Punta della Dogana. Historic sites suit this rich, discordant collection of over 10,000 contemporary works made by 400 artists since the 1960s.

Two hundred selected pieces are on display beneath the skylight of the former commodities exchange. "François Pinault was here every day during the installation,” says Caroline Bourgeois, curator of the billionaire’s collection and a member of his inner circle. “It reflects his personal choices, although Martin Bethenod (Deputy Chief Executive Officer Bourse de Commerce), Matthieu Humery (Photography Curator), Jean-Jacques Aillagon (Chief Executive Officer) and myself had input." Alone, but usually in groups, sculptures, paintings, photographs, installations and videos loop around a 30-foot high reinforced concrete cylinder that follow the lines of the original rotunda. Tadao Ando's nesting, brutal, minimalist architecture sets the tone for this "exhibition-manifesto", where the works intersect, intertwine and dialogue with each other so that the huge space, bathed in zenithal light marking time like a sundial, has the effect of an echo chamber. It is almost enough to make your head spin.

It is not easy to find one's way around the 73,195-square-foot circular building; the discrete signage could be clearer. No matter, all roads lead to their destination, as the 19th-century panorama depicting trade between continents shows. A replica of Giambologna's Abduction of the Sabine Women and a statue by Rudolf Stingel stand on the floor amidst a scattering of chairs—garden, office and museum—and airplane seats. These paraffin vanities by Urs Fischer will last only six months. "The Pinault Collection is a living collection that does not claim to write art history," says Ms. Bourgeois. "It has a kind of gravitas, but also a sense of humor, as Ryan Gander's Little Mouse attests." Appearing on the catalog cover, the stammering rodent calls out to visitors from a hole near the elevator on the first floor. Other "in situ" works lighten the atmosphere, such as Maurizio Cattelan's real-fake pigeons perched on the third-floor balcony and Tatiana Trouvé's Guardians—odd, empty seats overlooking the second-floor rooms.

Everywhere else, the tone is more serious. At the entrance to the passageway between the restored façade and its smooth concrete inner shell, Ici plage, comme ici-bas (Here Beach, Like Down Here, 2012), an acidic frieze by Martial Raysse, stands as a warning. A bucket of water falling from the sky dampens the enthusiasm of an outlandish crowd strolling along the French Riviera, while 84 windows from the 1889 Universal Exposition display Bertrand Lavier’s great Worksites (closet, fire extinguisher, scooter, cello, teddy bear, etc.).

Further along on the ground floor, about 30 subversive ready-mades provide a glimpse into the powerful, fierce and rare work of African-American artist David Hammons, "haunted by the wound of ordinary racism". "This is the first time an institution has devoted a monographic exhibition to him," says Ms. Bourgeois. "François Pinault met him 35 years ago and owns the world’s largest collection of his works. We wanted to display several works by each artist as a sign of his loyalty. He prefers delving deeply rather than flitting around." An American flag is slashed with Pan-African colors (Oh Say Can You See, 2017), crystal tassels hang from a basketball hoop (Untitled, 2000) and cats snooze on huge tom-toms (High Level of Cats, 1998). The tension culminates in the former lobby, plunged into darkness save for a metal cage as narrow as a prison cell placed in front of a map of colonial-era trade routes (Minimum Security, 2017).

Debates over identity continue on the second floor, where four sequences prove the vitality of figurative painting. The body is seen in all its states—fragmented, ghostlike, lustful. Showing for the first time, American Ser Serpas (born 1995), China’s Xinyi Cheng (born 1989), Germany’s Florian Krewer (born 1986) and Brazil’s Antonio Obá (born 1983) dialogue with the Netherlands’ Marlene Dumas, 67, American Kerry James Marshall, 65, Switzerland’s Miriam Cahn, 71, and Italy’s Rudolf Stingel, 65. The mixture of genders, generations, nationalities and media is a constant in Venice and at exhibitions outside the walls, but support for creation in the making seems to be the emphasis here. "Promoting emerging artists is at the heart of François Pinault's cultural project,” says Ms. Bourgeois. “This is where he is quite exceptional—in his curiosity and speed of commitment." Examples include his repeated visits to Xinyi Cheng’s studio in Belleville, his discovery of Florian Krewer at an alternative space in New York’s Chinatown and his influence on the trajectory of French artist Claire Tabouret, who has been living in Los Angeles since 2015 and whose portraits hang alongside others by Lynette Yiadom Boakye and Peter Doig.

The Pinault Collection is inclusive, concerned, reflexive and surprising. While its sure values are on display simultaneously in Venice (Bruce Nauman) and Marseille (Jeff Koons), the same spirit of openness reigns throughout the visitor’s route, which ends in the underground level to the beat of traditional music played by Tarek Atoui (The Ground, 2019) and composer Erik Satie’s Gymnopédies reworked by Pierre Huyghe in a sound and light installation based on a story by Edgar Allan Poe (Offspring, 2020). Outside, at the top of the Medici column, a vestige of the Hôtel de Soissons built in the 16th century for Catherine de Medici on the spot where her astrologers contemplated the stars, Philippe Parreno tells another adventure tale: when night falls, his "lighthouse" shines and transcribes René Daumal's unfinished novel, Le Mont Analogue, into Morse code—a triumphant and hopeful message in the sky of Paris.

The Heart: a Vital Organ as Both Theme and Symbol

Georg Baselitz: Works on Paper
Newsfeed
See all news
Proceeds from Auction Help Secure Future of Jewish History Museum
Soizic Wattinne Appointed Secretary General of the Giacometti Foundation
Washington DC’s National Gallery of Art Will Repatriate Looted Benin Cockerel
Barbados Announces Museum and Memorial to Victims of Slavery
Not to be missed
Analyses
Dostoyevsky and Holbein at the Kunstmuseum in…
The Kunstmuseum in Basel looks back at the Russian literary icon's…
Analyses
Hélène Henry: Textiles in the Jazz Era
The Villa Noailles is dedicating a historical exhibition to this…
Analyses
An Appropriately Monumental Book for the Prodigious…
The publishing house Taschen has dedicated a book to the Italian…
Analyses
Cartier Explores the Art of Islam and Beyond
A new exhibition at the Musée des Arts Décoratifs (MAD) in Paris…