The National Library of France has been renovated from top to bottom. The now restored historic spaces are open to all. A new chapter is beginning for a building that has housed "the memory of the world" for three centuries. 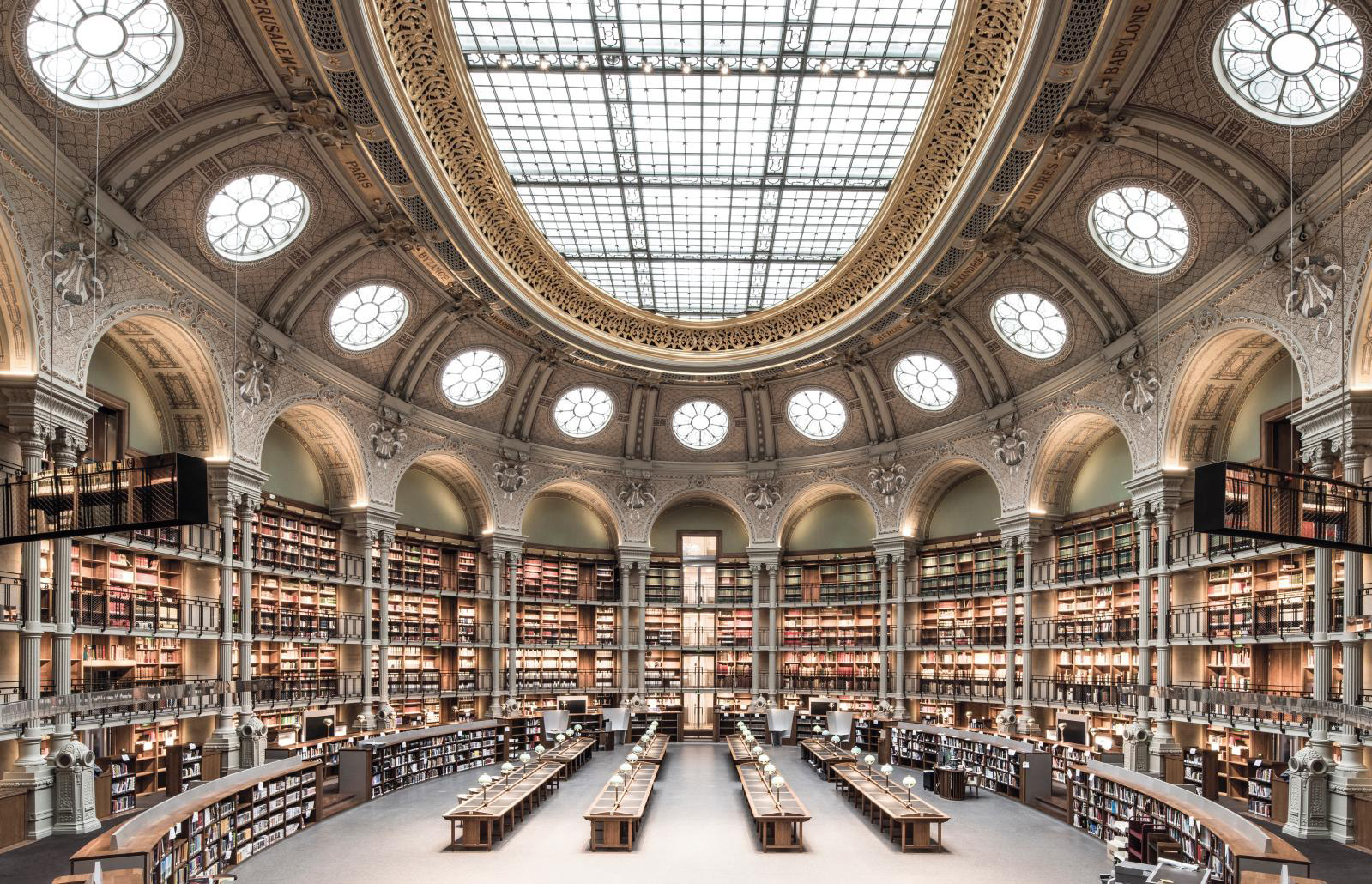 On September 17 and 18, visitors will be able to enter the historic buildings of the Bibliothèque nationale de France (BnF), a temple of knowledge that houses some 22 million manuscripts, prints, photographs, maps, plans, coins, medals, antiques and jewelry. About 50 actors, singers, dancers and acrobats will guide visitors through spaces transformed by a 12-year restoration, a maze that had been so long hidden by fences that they had almost become mysterious.

The first phase of work ended in January 2017, when the magnificently restored Labrouste Room on the rue de Richelieu side was opened. The next phase targeted the 22,000m2 (236,806 ft2) east wing along rue Vivienne, including the emblematic Oval Room, designed between 1872 and 1936 by architect Jean-Louis Pascal and his successor Alfred-Henri Recoura, and three vestiges of the 17th-century Mazarin Palace that are designated historic monuments: the Mansart Gallery, which was used as an exhibition space with no consideration given to its original subtle grisaille decoration; the Cardinal’s Room, transformed into a passageway; and the Mazarin Gallery, hung with dark red curtains, cluttered with desks and chairs on which generations of students wore out the seat of their pants beneath Giovanni Francesco Romanelli’s 1646 vault paintings masked by an iron grille from which chandeliers and spotlights hung. “What do you expect, it’s a library,” says Gennaro Toscano, scientific advisor for the museum, research and development in the BnF's Collections Department. “They were here to work, not stare at the ceiling.” If they couldn’t admire the cycle of Ovid's Metamorphoses, which Cardinal Mazarin commissioned Romanelli to paint—his first work in France, it still packed the power of the Roman Baroque—nor the rich stucco and decorative paintings by Alessandro Salucci and Vincent Adriaenssen, known as Il Manciola, if accretions, new construction and partitions from the 17th to the mid-20th century made the architecture illegible, it is because from the nearly beginning the library was cramped.

Expanding Collections
About 1367, Charles V (1334-1380) moved 910 books and 115 manuscripts into the Falconry Tower at the Louvre, thereby creating the Royal Library. Louis XI, Charles VIII and Louis XII added some 400 volumes looted from the Visconti-Sforza in Pavia in 1500. When on December 28, 1537, François I required all printers in the kingdom to deposit a copy of every book at the Château de Blois, to which the Royal Library had been moved, the legislator king issued the founding act of legal deposit, clearing the way for a dizzying expansion of the collections. As one king succeeded another, the library grew. Precious books were soon joined by medals, antiques and jewels, deposited from 1660 onwards in what is known as the King's Cabinet, which was created when Gaston d'Orléans (1614-1660), Louis XIV’s uncle, bequeathed his famous collection of rare objects to the Crown. This laid the foundation of the library-museum. The Royal Library and the King’s Cabinet became one.

Want to receive news and updates about auctions?
Sign up for our newsletter
A Library-Museum
“Today, we’re limited by the vision of the Revolution," says Mr. Toscano. "But in the past, museums were in libraries: books were laid flat on tables, paintings hung on the walls and scientific objects such as astrolabes and globes were in cabinets. Illuminated manuscripts and the first books in Persian and Arabic were shown to distinguished visitors. The first exotic objects from America, such as feathers, now in the Musée du quai Branly, arrived in the King's Cabinet, and, therefore, the Royal Library. This is also where the treasures of the Sainte Chapelle and Saint-Denis are kept.”
A different rationale guided the choice of bringing together objects and manuscripts, especially between 1720 and 1735, when the library was open to the public once a week from 11 a.m. to 1 p.m. “visitors could see objects and the books in the same place,” Mr. Toscano explains. “If a professor was giving a lesson on the Doric order, he would illustrate it with Piranesi’s prints of the temples of Paestum. Teaching was done with modern tools, much like PowerPoint today.”

In the mid-18th-century, the Royal Library was already renowned for the Colbert collection acquired from Abbot Michel de Marolles: 80,000 drawings including masterpieces by Dürer, Rembrandt and Jacques Callot. It was put into the already cramped Mazarin Palace. This is when the expansions began. In 1631, Robert de Cotte, the king’s architect, built a new gallery for the Medals Cabinet; in 1740, Jacques V Gabriel designed the North Wing; in 1826, the library took over the Mansart and Mazarin Galleries and, in 1833, the Hôtel Tubeuf, vacated by the Treasury; Henri Labrouste modernized the buildings between 1854 and 1875. Next came Jean-Louis Pascal, Alfred Recoura and, between 1930 and 1955, Michel Roux-Spitz, who restructured the spaces to create five new reading rooms and expand the reserves. And yet, while the 1998 opening of the new BnF in the 13th arrondissement freed up space, the Richelieu site remained rundown and inadequate.


Renovation and Transformation
“When we came here in 2007, it took us a whole week to see everything,” recalls Virginie Brégal, who, with Bruno Gaudin, restructured the quadrilateral group of buildings. “It was an immense maze of corridors (used as workspaces), strings of rooms and dead ends with 70 different floor levels.” About 15 firefighters patrolled the buildings around the clock to keep them safe (there were 110-volt outlets and no fireproof floors). The Gaudin Studio worked for 16 years on the project, which gradually evolved into a total makeover to open up the spaces, facilitate library access by creating a second entrance on rue Vivienne with a garden designed by landscape architect Gilles Clément, redesign horizontal and vertical circulation around a new staircase serving all the buildings, put up glass partitions to make places closed to the public visible, highlight the achievements of past architects, including the admirable Oval Room, where modern equipment imperceptibly mingles with the historical décor, and enhance spaces designated as historic monuments forgotten for centuries. “We tried to get as close to the original decoration as possible,” says Michel Trubert, head architect of historic monuments, who worked with Jean-François Lagneau. “In the Mazarin Gallery, where the entire surface was used for a test, conservators restored the transparency and brightness of Romanelli's paintings, removing, where possible, the prudish veils that had covered the nude muses since the late 17th century,” adds Mr. Trubert.

The BnF museum, heir to the dark, dusty museum of the Coins, Medals and Antiquities Department, where visitors had to ring a bell to enter, is located in the 1,200m2 (12,916 ft2) Richelieu Wing. A thousand exceptional pieces from different BnF departments are on display following a chronological and thematic order in five rooms that are like jewelry settings. Each rare, emblematic, movingly old and spectacularly beautiful item tells a unique story. Here is the fabulous Berthouville hoard (first-third centuries), discovered in 1830 by a Norman farmer plowing his field: about a hundred pieces in pure silver weighing 25 kilos, including two statuettes of Mercury, which were whisked away by the then Medals Cabinet curator, who arrived the day before his Louvre counterpart did. “It is now entirely on display at last,” says Mr. Toscano. “there’s a Roman cameo in a Parisian mount that belonged to Rubens, which he used as an iconographic source for the cycle of paintings devoted to Marie de Medici (Louvre Museum), a display case of medals bearing the likenesses of sovereigns—Louis XVI loved them—and the lavish room containing the collection of the Duke de Luynes, a leading figure in archaeology, with Greek vases on display “not just for their beauty but also because studies were done of them that made it possible to gather a body of knowledge,” says Mr. Toscano. Here, too, are Dagobert’s eighth or ninth-century Roman-inspired throne, used for the last time by Napoleon in the early 19th century, and the Cup of the Ptolemies (50 BCE-50 CE) carved in a sardonyx geode that was given by Charles the Bald to Saint-Denis Abbey and used during the coronation ceremonies of the Kings of France. In all, some 900 precious objects, manuscripts, scores, rare books and prints are on display. One of them catches the eye: a full-length portrait of Jules Mazarin by Nanteuil (1659) in the gallery bearing the cardinal’s name, where he exhibited the highlights of his collection. What an amazing comeback!