Despite the pandemic, the auction market has not collapsed, and the first quarter of 2021 even broke records: a euphoria now confirmed by the traditional May sales in New York. And a revolution is probably taking shape at the same time… 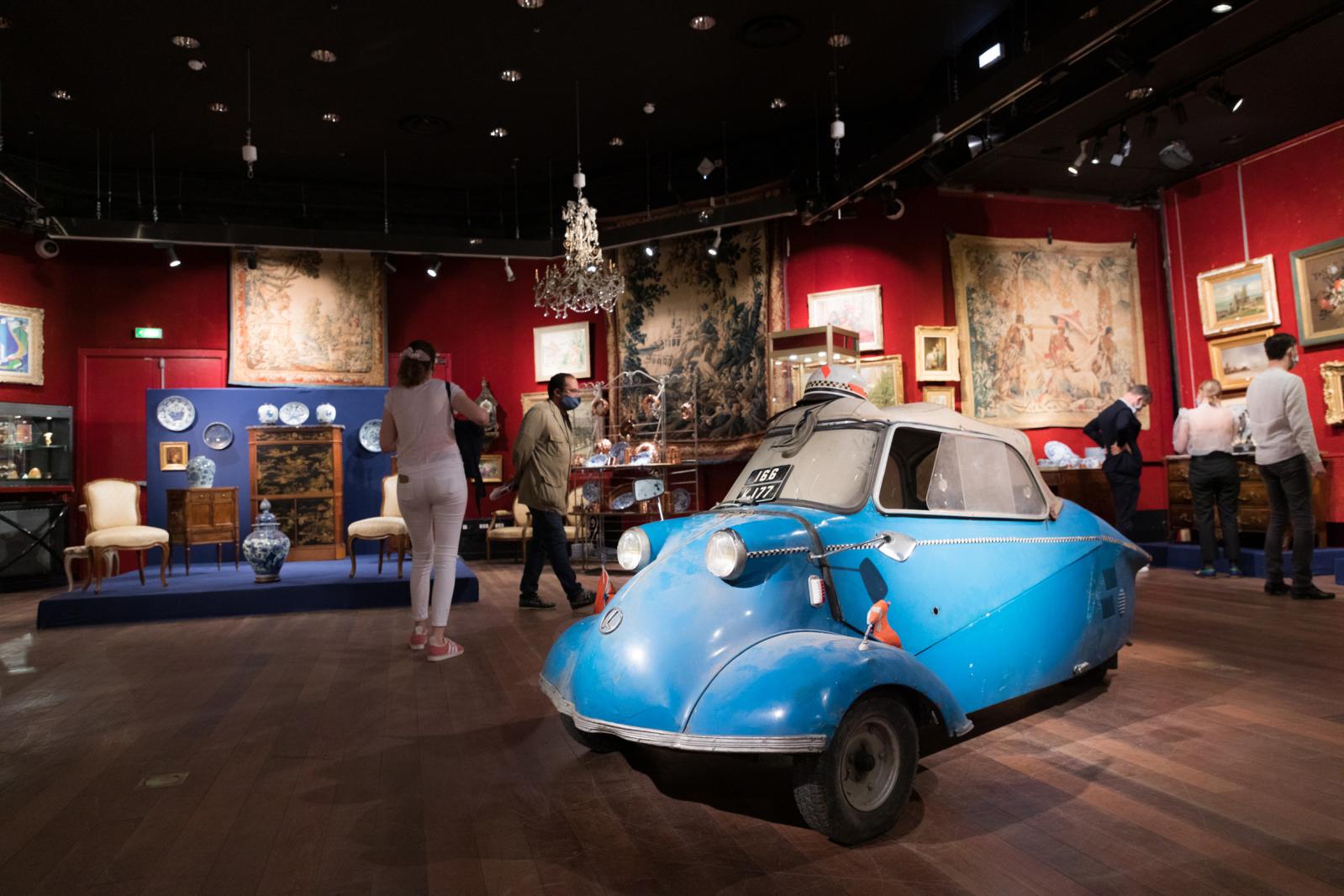 An exhibition at Drouot, in compliance with health regulations: "Collectors need to see the works before they buy, even if they subsequently bid from their sofas." Alexandre Giquello

An exhibition at Drouot, in compliance with health regulations: "Collectors need to see the works before they buy, even if they subsequently bid from their sofas." Alexandre Giquello

There is talk of a crisis. But what crisis, precisely? It is true that in 2020, following the pandemic, the global business volume of auctions, estimated at $17 billion by Clare McAndrew's report, dropped 30% compared with the previous year. In France, losses ranged from 20% to 40%, depending on the auction houses, and were counterbalanced to a certain degree by private sales. In any event, 2021 got off to a roaring start. In January, Drouot recorded "the highest result for this month for ten years," i.e. €15.6 M (including buyers' premiums), compared with €5 M during the last five years. At an international level, the first quarter saw sales of "a historic number of works", according to Artprice: over 112,000, including 25,000 in the US, 18,000 in France and 15,000 in the UK, for a total of $1.6 billion, matching the average recorded over the decade preceding the health crisis (2010–2019). It is not surprising that this figure has increased by 18% since 2020, given that the first wave of the pandemic had already caused havoc. On the other hand, its 6% increase compared with 2019, which held the "quarterly record for the entire history of the art market" is more unexpected. Yet this euphoria has been confirmed by the prestigious spring auctions in New York. Between May 11 and 14, Sotheby's and Christie's generated proceeds of nearly $1.4 billion from the sale of Impressionist, modern and contemporary works.

An Ever-Keen Appetite for Art
"Actually," says Artcurial auctioneer Stéphane Aubert, "the appetite for art has never abated." And there's a reason for that. Although the pandemic has rocked many sectors, it has boosted others, given that collectors do not belong to the categories affected, when they have not become richer. "The money injected into the French economy has undoubtedly been beneficial too," says David Nordmann, auctioneer at Ader. Meanwhile, auction houses have adapted. Initially paralyzed by the closures imposed, then authorized to reopen in compliance with the health protocol, most shifted to digital or accelerated their transformation. According to a study by the CVV (France's Voluntary Sales Council), seven in ten operators in France have their own website, but only a third offer online or dematerialized sales, while nine in ten use digital platforms, mainly Drouot Digital and Interenchères. In any case, "to start with, we were afraid of losing our traditional customers, who are not very familiar with digital tools, but they got used to them faster than we thought," says Cécile Verdier, president of Christie's France. Deprived of distractions and travel—and now with a lot of free time—, they too began surfing the Internet, and would give themselves a treat by first embellishing their homes.

For their part, loyal collectors have continued to nurture their passions, with considerable focus: "They know what they want; they look for it and when they find it, they buy it," says David Nordmann. At the same time, new bidders have appeared. Firstly, private individuals who were already connoisseurs: "Because they could not go to their usual dealers, they turned to us," says Alexandre Giquello, president of Drouot Enchères. And secondly, customers who were less knowledgeable but familiar with 2.0, and generally younger. "We have opened virtual doors to them that they would not have entered in Paris, London or New York," says Mario Tavella, director of Sotheby's France.

“In January, Drouot recorded "the highest result for this month for ten years," i.e. €15.6 M (including buyers' premiums), compared with €5 M during the last five years.”

In fact, the general opinion is that the drop in turnover has often been caused by supply problems. "In this unprecedented context, sellers were reluctant to entrust us with works, especially at the high end of the market," says Cécile Verdier. Or "we had to fight to stop them from keeping works from us," says Mario Tavella. "Imagine that you inherit a Picasso," says Alexandre Giquello. "Inevitably, in this uncertain context, you hesitate to put it up for sale, and if you don't need the cash, you prefer to wait, when in fact it would be a good moment because demand is high." The results prove him right. An unpublished cover for Hergé's The Blue Lotus sold in January for €3.1 M with Artcurial in Paris, and Brueghel the Younger's Peasants' Meal for €1.3 M with Mathias-Bournazel and Oger-Blanchet. Then, under the auspices of Actéon in Compiègne, a red chalk Nude Man by Bernini fetched €1.9 M, while Scène de rue à Montmartre, an oil by Van Gogh, presented by Sotheby's and Mirabaud Mercier, achieved €13 M. In the US, where the figures are always outsize, the rule held good as well. In January, Sotheby's sold Young Man Holding a Medal, a Renaissance portrait by Sandro Botticelli for $92.2 M in New York. In the same period, an "NFT" (Non-Fungible Token or digital collage) by American artist Beeple, Everydays: the first 5000 days, offered by Christie's, fetched $69 M. The latest fad of the moment.

The Auction World Moved into the 21st Century in Six Months
Does this almost unhoped-for dynamic energy signal a return to normal activity, including its excesses? One thing is certain: during this chaotic period, art has remained a sound investment "as long as it involves excellence, of course," says Philomène Wolf, curator and auctioneer at Actéon. And, jokes Claude Aguttes, "buying artworks enables you to diversify your assets, especially if you already own a lot of shares." However, he warns, "the health crisis will have repercussions on our profession, because in a few months, we have learned to work differently, and everyone has adopted new habits."  As a result, there will probably be more and more bidders online. Does this mean the disappearance of physical sales? "When Drouot's auction rooms reopen as usual, I'm sure people will hurry along just as before," says David Nordmann. But in the immediate future, there will be changes. The most common sales, estates and specialties, will eventually no longer be held within these walls, for profitability reasons," says Giquello. "That's why, in October 2020, I opened Hôtel Drouot to non-shareholding sales companies, so that they can stage auctions there. On the other hand, we are going to develop exhibitions even further, because collectors need to see the works before they buy, even if they subsequently bid from their sofas. In fact, I believe they will soon be the most important aspect of auctions, not hammer sales, except, of course, for exceptional sales like the Breton or Saint Laurent collections." Undoubtedly, the pandemic is continuing to disrupt the auction world.