The Art Institute of Chicago, one of the largest museums in the U.S., is among cultural institutions working towards accounting for histories of exclusion and disenfranchisement as well as charting a new course towards sustainability and social responsibility. 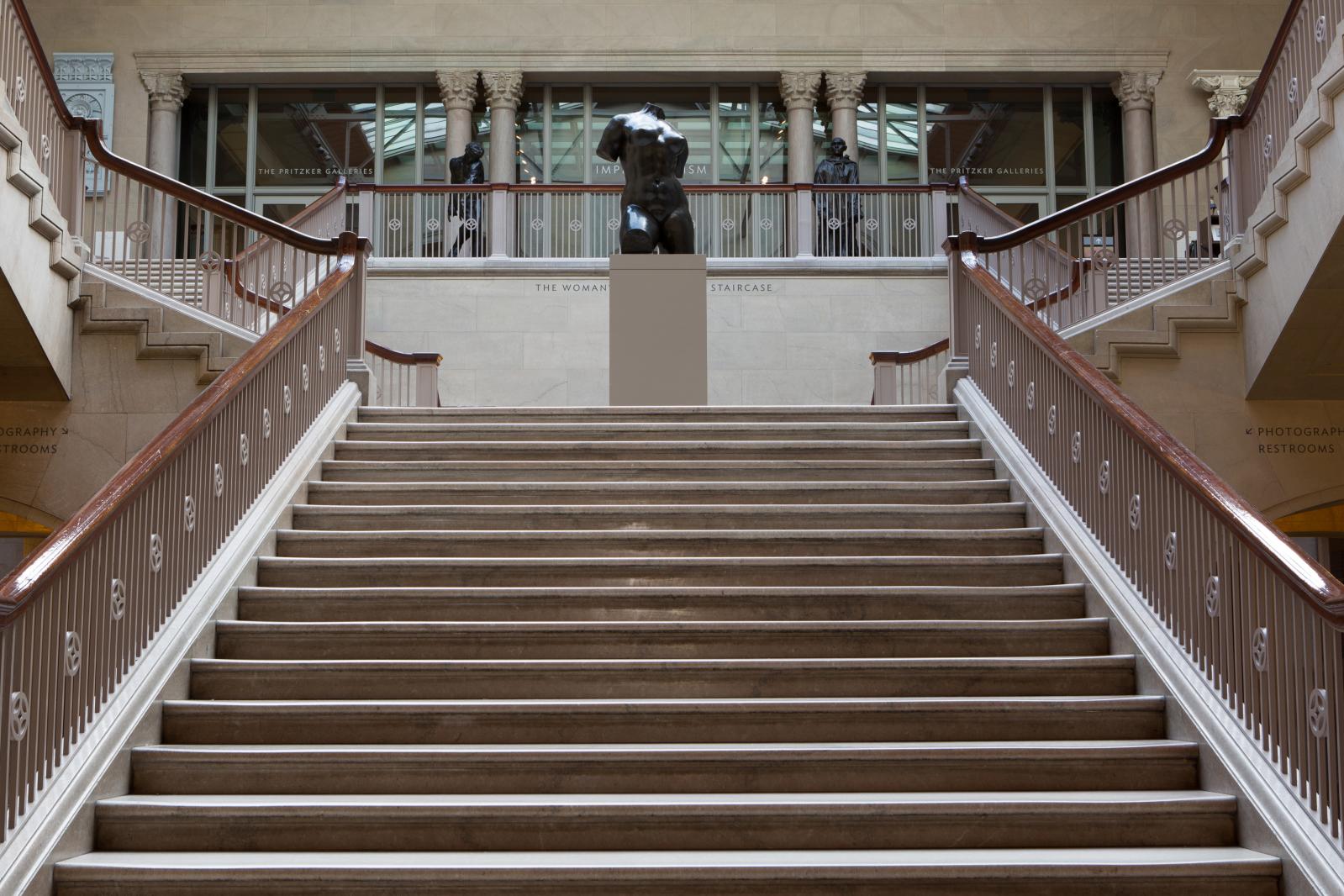 The Land
The Art Institute of Chicago’s website now features a land acknowledgment that reads in part: “The Art Institute is located on the traditional homelands of the Council of the Three Fires: the Ojibwe, Odawa, and Potawatomi Nations. Many other tribes such as the Miami, Ho-Chunk, Menominee, Sac, and Fox also called this area home.” On September 27, 2019, the Institute held a land acknowledgment ceremony, which included addresses by Heather Miller, then the Executive Director of the American Indian Center (AIC), and James Rondeau, the Institute’s President and Director. In his speech, Rondeau announced that the museum will form a community advisory board to guide the reinstallation and reinterpretation of the Arts of the Americas galleries. He emphasized the Institute’s continuous commitment to supporting work of Indigenous artists, in addition to making the official statement of land acknowledgment.
The Art Institute is one of a number of Chicago-based institutions that have incorporated land acknowledgments within their websites and physical spaces. A territorial or land acknowledgment is a formal statement that recognizes a place where Indigenous peoples have lived historically and continue to live today. Territorial acknowledgments are not new and have been practiced for centuries by Indigenous peoples, but they have become common for non-Indigenous institutions in the U.S. only recently. In this respect, the U.S. lags behind its neighbor to the north. In Canada, land acknowledgment ceremonies have become increasingly widespread, especially since the calls for action issued by the Truth and Reconciliation Commission (TRC) in 2015. An important feature of land acknowledgments is the fact that they not only reflect on the past, but also recognize the presence of Indigenous peoples in the present day, drawing attention to continued erasures and the systemic legacies of settler colonialism. Ultimately, they are directed towards the future, marking the initial step towards reconciliation and building a more inclusive and equitable society.
In the case of the Art Institute, the “land” is understood in a holistic sense, since the museum sits on what used to be the basin of Lake Michigan, a site that has long held major significance for the Indigenous peoples in the region. The Art Institute was built on a landfill created in the 1870s with debris from the Great Chicago Fire. The museum expanded through the twentieth century on the additional landfill deposited between 1897 and 1907 by the Chicago Tunnel Company to form what is now Grant Park. As such, the Institute was bound up with the rapid growth of Chicago and its economic ties to the “closing of the frontier” after a century of the westward expansion of U.S. settlers into Native American lands.

The Institute’s Origins
Established in 1879 as the Chicago Academy of Fine Arts, the Art Institute was a product of the tide of cultural philanthropy that swept across the U.S. in the late nineteenth and early twentieth centuries. The institution, which from the beginning included a museum and a school of fine arts, was founded and financed by a new generation of wealthy elites. These were the sons and daughters of the original Chicago magnates, whose fortunes were built together with the city itself. In that respect, the Art Institute and other contemporaneous civic projects benefited from the accumulation of wealth made possible through the violent removal of Indigenous peoples that took place between the late eighteenth century and the 1840s. The first board of trustees of the Art Institute was primarily composed of the members of the city’s Board of Trade, which was created in 1848 to formalize the burgeoning grain and cattle markets of the Upper-Midwestern U.S. The latter’s president, Charles L. Hutchinson also served as the Art Institute’s president from 1882 to 1924, a formative period in the history of the museum characterized by the rapid growth of the collection. The Chicago Academy of Fine Arts was renamed the Art Institute of Chicago in 1882 and it moved into its current home on Michigan Avenue in 1893. The iconic Beaux-Arts building, designed by the Boston firm of Shepley, Rutan and Coolidge, was continuously enlarged during Hutchinson’s tenure. In 1916, additional gallery space was built above the tracks of the Illinois Central Railroad, thus opening the possibilities for further expansion of the Art Institute to the eastern part of Grand Park, which followed with the additions of new buildings in the 1970s and 1980s.

Into the 21st century
In 2009, the Art Institute inaugurated the Modern Wing, which increased the museum by 264,000 square feet, or around 30 percent of its previous size. The Modern Wing offers additional exhibition space and extensive education center facilities, but it also serves to further integrate the Art Institute within Chicago’s landscape. In addition to a ground-level entrance on East Monroe Street, the new structure features a pedestrian bridgeway that directly connects the museum to Millennium Park across the street.
The Modern Wing was designed by the renowned architect Renzo Piano and features state of the art “green” technologies. The building’s façade is composed of a double layer of glass, which traps outside air and increases energy efficiency. Similarly, the calibrated lighting system in the galleries allows to maintain consistent light levels while maximizing the use of natural light and reducing energy consumption. Most notably, the building is covered by what Piano calls a “flying carpet”—a floating canopy of shaped blades that were engineered specifically for the Art Institute’s location to bring light from the north, while deflecting the harsher light from the other directions. Caught by these curved blades, natural light is filtered into the top-floor galleries through large skylights. While visually echoing the horizontal expanse and soft ripples of the nearby Lake Michigan, the roof canopy somewhat paradoxically owes its functionality to Chicago’s rigid urban grid. According to Piano, “All this is made easier in a city that is built on precise north-south and east-west axes, perfectly in tune with the cycle of the sun.” Given these elements, the choice of the name for the new building is evocative—rather than bearing the names of the founding donors, according to the Institute, it is meant to serve as the celebration of the future-directed vision.

Initial Steps
In its efforts to foster sustainability and social responsibility, the Art Institute still has a long way to go. For example, in early 2019, the museum drew criticism when it announced an exhibition titled “Worlds Within: Mimbres Pottery of the Ancient Southwest.” The show was supposed to feature over 70 artifacts from around 1100 AD that were made in present-day New Mexico. But the discussions at the preceding scholars' day raised two critical concerns about the exhibition: the facts that it was being organized without the input of Indigenous people and that the works are funerary objects taken from burial grounds. The museum responded by canceling the exhibition and since then has reached out to Native community leaders. The land acknowledgment ceremony is an important part of these efforts towards institutional transformation and greater reconciliation. These might be small steps, but they are novel among cultural institutions in the U.S. as they confront the nation’s collective past and attempt to chart a more inclusive and sustainable future.

New Building Design for the Princeton University Art Museum
Newsfeed
See all news
Asia Now in Paris Places the Spotlight on Iran
Is Afghanistan's Art Safe Under the Taliban?
Samsung Signs Partnership with Louvre
Newly Discovered Van Gogh Sketch Authenticated
Not to be missed
Cultural Heritage
An Architectural Gem: The Birth of Saint-Quentin's Palais…
A history impregnated with the industrial spirit of the 19th century,…
Cultural Heritage
From Caesar to LUMA: Arles, a City of Art and Culture…
Situated on the banks of the Rhone the provençal city of Arles has…
Cultural Heritage
Under the Floral Spell: Art, Architecture and Roses at…
Every year the gardens of Bagatelle, in Paris, attract rose gardeners…
Cultural Heritage
Villa E 1027: Eileen Gray's Masterpiece Rises from the…
The architectural masterpiece designed by Eileen Gray in Roquebrune-Cap-Martin…