After four years of restoration work, the Cistercian abbey is opening to the public with the Brache-Bonnefoi Collection. A stunning combination of modern art and medieval cultural heritage. 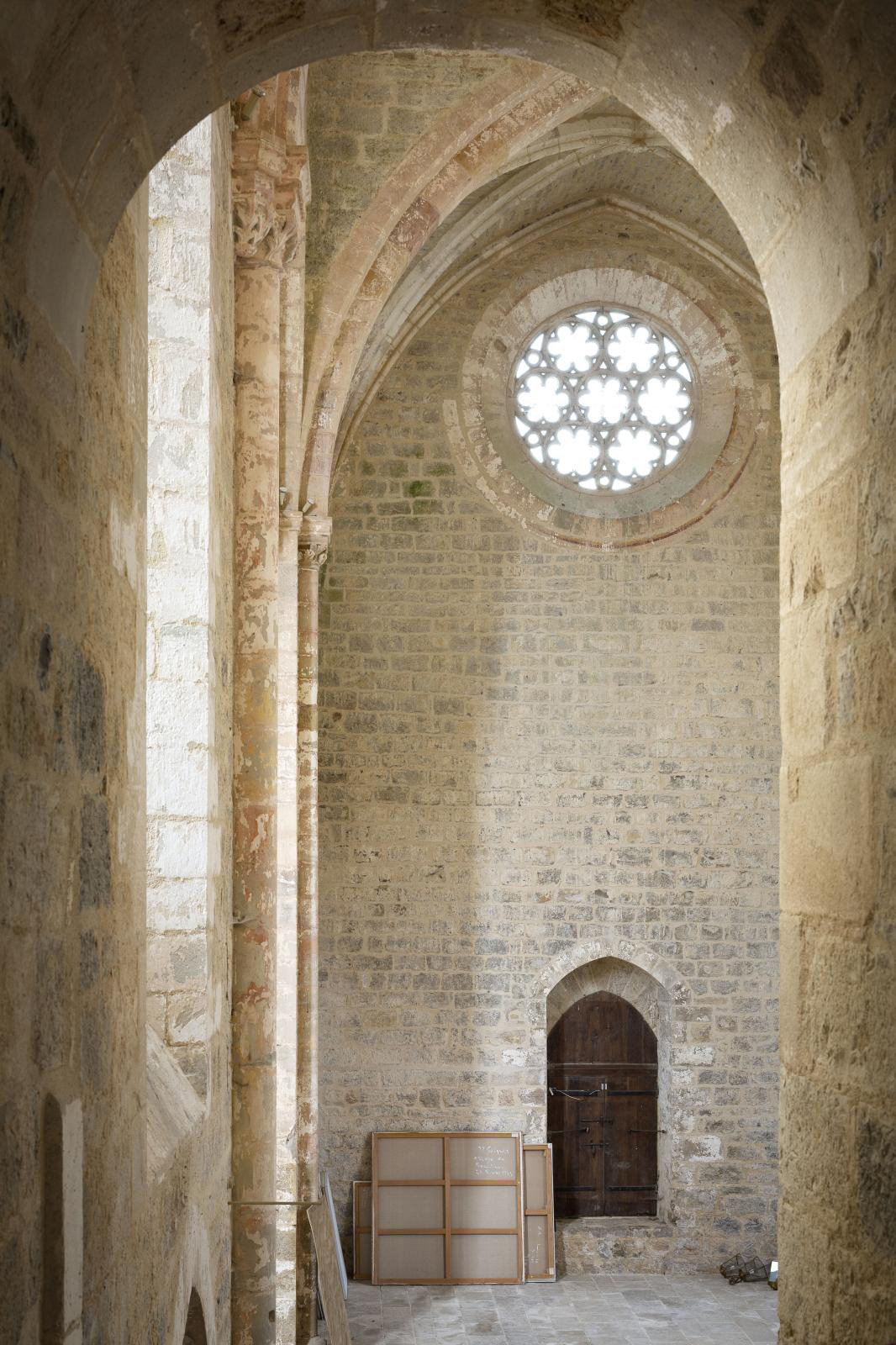 In the heart of the Seye valley, on the border of the Lot and Aveyron departments, lies a wooded, flower-scented valley alive with the sound of fresh running water and birdsong. This place of extraordinary harmony is home to the Cistercian abbey of Beaulieu-en-Rouergue. Founded in 1144 by the bishop of Rodez, Adhémar III, under the impetus of Bernard de Clairvaux (the great spiritual master of the monastic order), Beaulieu is an abbey characteristic of the time, with its quadrilateral layout around a cloister, which was destroyed in 1562 during the Wars of Religion. To the east, the monks' building, with the chapter house where the weekly chapter was held and the dormitory, was built before 1250, as was the west building devoted to the lay brothers (whose work supported the abbey), with their dormitory and the Gothic cellar. To the south, the abbot's residence, which included the refectory, kitchen and abbot’s reception rooms, dates from the 17th and 18th centuries. Finally, to the north, the large abbey church, begun in the 13th century and completed early in the 14th, is typical of Cistercian Gothic architecture: spare and refined, the only decoration provided by capitals evoking the surrounding nature. "There were also frescoes, painted in sober tones, as Bernard de Clairvaux forbade bright colors in monastic life," says Benoît Grécourt, administrator of the Centre de Monuments Nationaux of Tarn-et-Garonne and Haute-Garonne. As is evident in the lack of ornamentation in the upper floor of the refectory wing. The last monks left during the French Revolution, and the abbey was then used as a barn.

In the 1950s, two collectors, Pierre Brache (1920-1999) and Geneviève Bonnefoi (1921-2018), discovered this enchanting, totally abandoned "shipwreck" of a place. After the war, with help from the gallery owners René Drouin and Jean Fournier, the young couple began to support representatives of the young generation of French artists, and bought or exchanged Dubuffets, Fautriers, Estèves and Bissières. In 1959, they decided to buy the old abbey, which cost FF400,000 at the time. To raise the necessary funds they sold one of their Brancusi sculptures, and in the mid-1970s a second one, the 1917 Premier Cri (First Cry), to finance the restoration work. Directed by Jean-Pierre Jouve, chief architect for heritage monuments, the project took nearly 13 years. A colossal amount of work was needed in the church because it had to be cleared of all the rubble. Then it was the turn of the chapter house, and finally the cellar and the fishpond. The stained-glass windows destroyed during the Revolution were replaced by large colorless windows, which look out on the natural environment and contribute an astonishing quality of light and transparency.

Philippe Bélaval, president of the CMN (Center for National Heritage Monuments), pays tribute to the couple's achievements by emphasizing their total commitment to this place, which they instantly fell in love with, saved from decay and turned into a center for fascinating exchanges around art, with exhibitions and writers' and musicians' circles. "Not all the art of their time," he says, "but the kind they liked, which they bought from artists who were first and foremost friends, and which they thought appropriate to the setting of Beaulieu." Their aim was very avant-garde: to associate the spare, uncluttered building with the similarly unadorned modern aesthetics typical of the Trente Glorieuses (France’s postwar boom period), with exhibitions of works by Dubuffet, Michaux, Hantaï, Brancusi and Poliakoff in the nave. This combination of medieval religious architecture and contemporary art, with contemplation as the common denominator, was unique at the time.

Want to receive news and updates about auctions?
Sign up for our newsletter
The restoration work ended at the same time as their marriage, for in 1973, the couple separated. With no heirs, they decided to bequeath the estate to the Caisse Nationale des Monuments Historiques (now the CMN), and also, over the years, over 1,200 artworks, an eclectic collection of personal objects, a well-stocked library, extensive documentation and archives. The contract was somewhat unusual: the abbey’s residential part remained subject to usufruct. Journalist and art critic Geneviève Bonnefoi was thus able to remain in her home and oversee the art collection as curator, continuing her role as supervisor of the premises with her inimitable energy and forceful personality.


"A promise had been made to exhibit the collection at the death of the last spouse," says Benoît Grécourt. Pierre Brache, director of several companies including Fauchon and the Tour d'Argent, and general secretary of the Société des Amis du Musée National d'Art Moderne at the end of his life, was the first to die in 1999. Shortly after Geneviève Bonnefoi's death in April 2018 at the age of 97, the CMN decided to launch a major restoration and redevelopment program for the abbey, and to create a modern and contemporary art museum in this captivating setting. Delayed by the pandemic, the work was finally accelerated thanks to an exceptional grant of €3 M from the government's stimulus plan to support this major heritage site in Tarn-et-Garonne, out of a total budget of €10 M for the entire estate.

It took less than four years to restore the buildings to their original appearance, display a selection of masterpieces from the Brache-Bonnefoi Collection in the completely renovated abbey residence, and adapt the surroundings to enhance the site and receive the public, with a restaurant and a store. The aim was to create a museum circuit that sets off the art collection. 160 of these treasures are exhibited in rotation. Claire Simonet's refined staging extends over nearly 1,000 sq. meters (1196 sq. yards), in 19 rooms whose luminous white walls evoke the simplicity of the monks’ habits. The first part of the exhibition recounts the history of the monument, the monks and the couple’s approach, while the upper floor presents a selection of works that echo the pure spirit of the site, notably by minimalist artist Simon Hantaï and abstract painter Frédéric Benrath. The masterpieces also include a Tête d'otage (Head of a Hostage) (1944) by Fautrier, Sénanque III (1953) by Victor Vasarely, Hommage à Raymond Roussel (1957) by Georges Mathieu and a Hans Hartung from 1948, T 48-35.

The abbey is now the primary center for contemporary art in Occitanie. The dynamic Benoît Grécourt is considering collaborations with the Dubuffet and Vasarely foundations, and with the Soulages museum in nearby Rodez. With its completely redesigned park and the creation of a garden of remarkable roses, Beaulieu is today one of the best-preserved abbeys in France, along with those of Fontenay and Cîteaux. A must-see.

From Marquet to Buffet: A Collection Full of Provencal Sunshine
Not to be missed
Cultural Heritage