The creation of the royal tapestry workshops under Louis XIV broke with the mural approach specific to medieval and Renaissance tapestries. In these spaces dedicated to the service of power, the loom established roots as an art of the multiple, which was also dependent on painting. 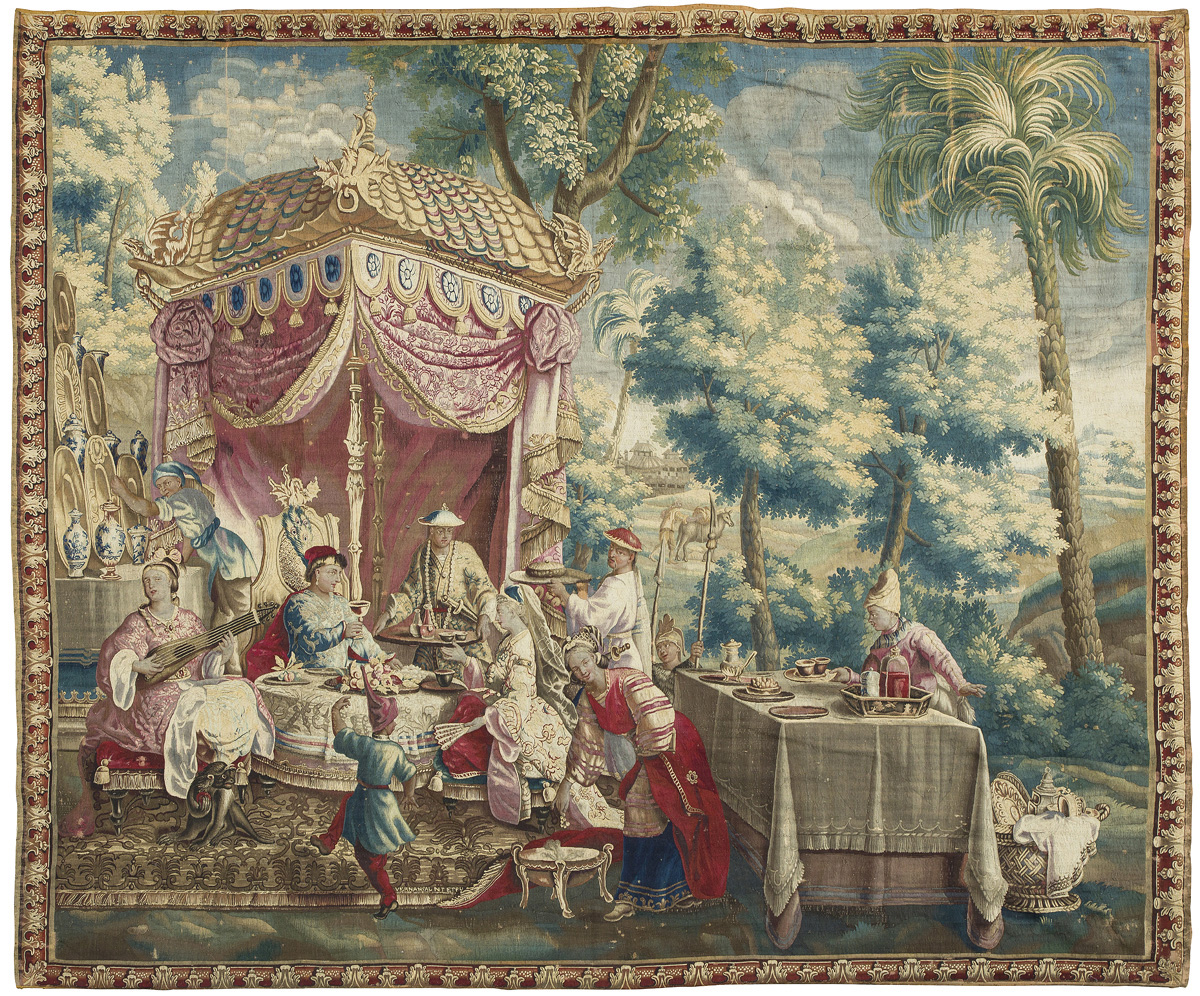 Long before Louis XIV's minister, Jean-Baptiste Colbert, reunited Paris's scattered factories at Les Gobelins in 1662, Louis XIII had ordered the artist Simon Vouet, who was in Italy, to return in 1627. The idea was for the painter to collaborate with Maurice Dubout, the king's tapestry-maker, in the Louvre workshops. While paintings consolidated royal power, tapestries were a universal presence. This was also in Colbert's mind when he appointed Charles Le Brun (1619-1690) as head of Les Gobelins. The Mannerism and poetic lyricism of the Renaissance Vouet drew from the fashionable novels, poems and epics of the time were succeeded by a classicism that glorified the young Louis XIV. The hangings based on paintings were certainly not original, but they were intended to disseminate models, and become the norm. Those featuring the "History of Alexander", the "Muses" and the "Seasons" were admired more for their decorative qualities than for their exploration of the art of tapestry. In addition, the cartoons often needed to be retouched: transposing the easel to the loom did not suit the medium, and weaving declined because of a process solely dictated by painters. Reflecting this lack of consideration, a palette of bright, solid colors—known as "grand teint"—was developed to make tapestries as faithful as possible to works painted by Pierre Mignard, Cotte and Jean Berain. The latter was an ornamentist who did not only work at Les Gobelins; he also produced cartoons for the Beauvais manufacture, which was privately owned and set up by Louis Hinart through a royal order, and whose bankruptcy enabled Philippe Behagle's arrival in 1688. Behagle took over not only the commissions from his predecessor's Parisian workshop, but also the reins of the manufacture. This was where the "Grotesques à fond jaune" ("Grotesques on a Yellow Background") hangings designed by Berain were woven. They were so successful they undoubtedly spared Beauvais the fate of Les Gobelins, which, dependent on royal funding, was forced to close between 1694 and 1699, when war mobilized all available resources.

Happier times came with the Regency (1715-1723). The "Story of Don Quixote" (1715-1751) after Charles-Antoine Coypel was a resounding success. Subsequently, all the leading painters of the time were enlisted. Charles-Joseph Natoire, François Boucher, Carle Vanloo and Jean-Baptiste Oudry created some 250 new subjects with a graceful, erudite aesthetic, including the iconic "Louis XV's Hunting Parties" and "Loves of the Gods". Loom setters were required to follow their directives and, when their Baroque palette required a wide range of shades, they had to resort to "petits teints", inferior colors that were not very resistant to the light: and resulted in a rapid decline in quality. However, orders for hangings, especially woven portraits, poured in from France and Europe. Beauvais followed Les Gobelins in every particular, although in 1734 Oudry skillfully breathed new life into it. Beauvais' "Chinese Hangings" and "Story of Psyche" woven on cartoons by Boucher elevated the reputation of the Oise workshops to Paris levels. The hangings, generously lavishly enriched with silk, embodied unprecedented sensuality and mural pieces were accompanied, as at Les Gobelins, by a steady production of furnishings. In 1786, the "Arts and Sciences" hangings illustrated the factory's glory days before the turmoil of the Revolution.

The Creative Vitality of Aubusson
Aubusson became a royal factory in 1665 and proudly claimed this title in the initials woven into its outer borders, "MRD" (with the spelling Daubusson) or "MRDB" (Du Buisson): a privilege shared by the Felletin Manufacture in 1689, which signed its products "MRDF" or "MRDFelletin". In the previous century, the workshops of La Marche had flourished thanks to Flemish skills. In the 17th century, their numbers gave them a strong position, with a wealth of products that were more diversified than those of Les Gobelins or Beauvais. Aubusson, reluctant to appoint a king's painter until the mid-18th century, could be proud of these highly inventive loom setters, whose creations appealed to the bourgeoisie and minor nobility. "Verdures"("Garden Tapestry"), sometimes exotic when borrowed from chinoiseries, remained the most popular, closely followed by vases of flowers (between 1620 and 1635). Lives of the saints, fantastical subjects (from 1630 onwards and particularly in the 1650s) and genre scenes at the end of the 17th century, while not as refined as Paris or Beauvais tapestries, were also popular with the higher aristocracy. Cartoons already used elsewhere, like those for Le Brun's "History of Alexander" series (woven in Aubusson in the late 17th century) and those of Boucher and Oudry in particular, were also reworked on the loom.

The last quarter of the 18th century and the Empire marked the swan song of classical tapestry. The weavers, obliged to imitate painters, increasingly used "petits teints", meaning that tapestries faded rapidly.  To compensate for this problem, their colors were intensified. The result had already been already judged disastrous in 1737 by a caustic Coypel. Called upon to save Les Gobelins and Beauvais from decay, he prevented the worst. But the end of the century challenged an art that was supposed to be identical to painting, at a much higher cost. After the Revolution (fatal for many tapestries), Les Gobelins was once again called upon by the Empire, which made no better artistic use of the factory than the previous reigns. But though tapestry was lackluster in the 19th century, it was on the threshold of a remarkable modern revival...

Two Centuries of Excellence in the Decorative Arts