In the late Middle Ages, tapestry production, whose origins lay in the East and classical antiquity, was one of the most prominent crafts in Western Europe. Numerous widely-scattered workshops in France already foreshadowed the royal factories of the future. 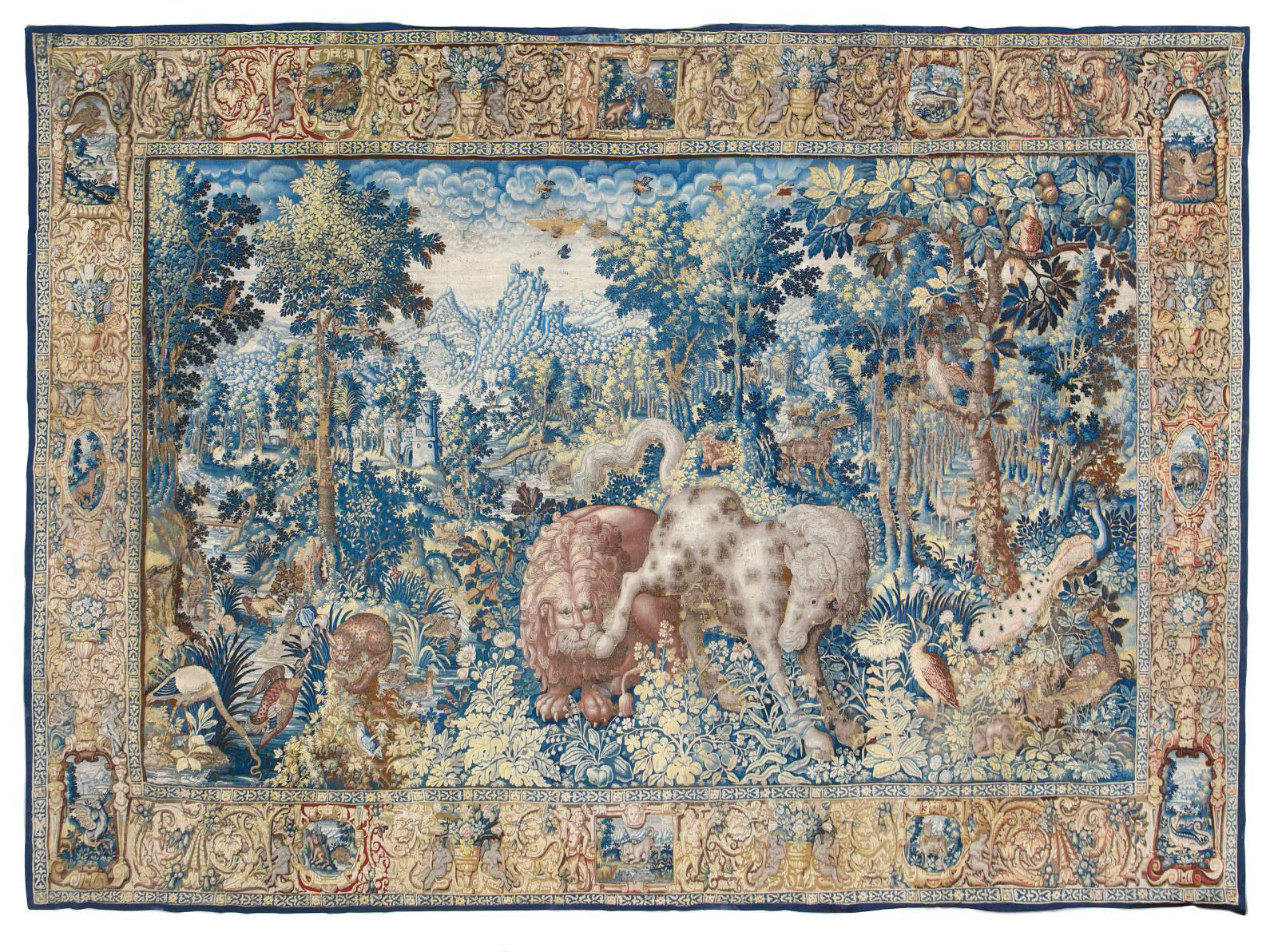 In the 11th century, a few weavers who had moved to Limoges and Poitiers, enamored of the "biaus tapiz" (beautiful carpets) brought back from the East by the Crusaders, worked on perfecting the "high warp" technique. This involved a vertical loom with two layers of warp threads, which were always wool. At their looms, the craftsmen crossed and intertwined the layers of colored warp and weft threads. This weaving formed the decoration, where the warp threads disappeared beneath the weft. The precision enabled by the high warp technique quickly made its name. As the "right" side could be seen during weaving, any errors could be corrected—an advantage not provided by the low warp method with its horizontal loom. Referring to his cartoon, the weaver could thus work and rework the piece until he obtained a result faithful to the model. This reverse method of working meant that for a long time tapestries appeared as mirror images of their cartoons, before artists adapted their work to this particular feature of weaving.

Up until the Hundred Years War (1337-1453), high-quality, steady production made the fortune of workshops in Paris and Arras, though few works have come down to us. These survivors include the Apocalypse Tapestry (housed in the Tapestry Museum in the Chateau of Angers), consisting of six pieces with an initial area of 850 square meters (9,149 square feet): the largest known today. These were woven in Paris between 1373 and 1380 by 35 virtuoso tapestry weavers, who hid the thread ends—usually visible on the reverse side—inside the weft. The tapestries "with no back or front" were thus perfect on both sides. This must-have wall hanging delighted the painters who saw their cartoons reproduced twice, without being offended by the slight liberties taken by the loom. Their successors were not so generous! From the millefleurs with green or red backgrounds of the first third of the 15th century to the religious and secular subjects at the end of that century (the "Nine Worthies" and epics being the most popular), attributions are sometimes possible and illustrate the versatility of medieval artists. For example, Jean d'Ypres designed stained glass windows as well as the cartoons for the Dame à la Licorne (The Lady with the Unicorn, Cluny Museum), a tapestry without a woven frame, bordered by braid as was usual at the time.

In the workshops of the La Marche region, the countryside of the Creuse provided inspiration. Here, the "Aristoloche" tapestries drew on subjects always skillfully renewed, populated with a fabulous bestiary depicted in lush greenery, whose bluish shade today is due to the fading of the yellow dyer's weed. On the reverse side, less exposed to light, the green has stayed fresh. Generally, between 1.20 and 1.50 meters high (3.9 to 4.9 feet high), these pieces enchanted the bourgeoisie and warmed their castles, where they were hung on the walls, decorated beds and altars, provided canopies for royal or episcopal seats, and were displayed during religious festivals.

The craftsmen of Aubusson and Felletin gained in a dexterity they owed much to the exiled Protestant weavers who arrived at the end of the 16th century. But with their coarse warp, thick wool, palette limited by the absence of qualified dyers and designs that suffered from a dearth of artists, their narrative tapestries never equaled those of Flanders. These workshops nonetheless made up for their somewhat unsophisticated products by producing them quickly at a low cost, and became firmly established in French tradition thanks to the low warp loom. The cartoon, placed under the warp layers, was reproduced on them and woven using the high warp principle—though here the tapestry's right side up could not really be seen before the woven piece was removed from the loom.


Renaissance Tapestries
The 16th century was a prosperous period for Flemish weaving, which provided formidable competition, led by Brussels. The workshops used silk, gold and silver thread, cornering commissions from the nobility and proudly sporting a stylistic renewal strongly influenced by Italy. This enormously changed the inventiveness hitherto reigning in medieval tapestry, which still lacked perspective—and for which the 19th century would be nostalgic. The thread became the equal of the paintbrush, and weavers expressed effects of depth and modeling by juxtaposing tones of different values. Cartoons were by Mantegna, Dürer, Julius Romano and Raphael, who entrusted his cartoons to the weaver Pieter Van Aelst for the Sistine Chapel tapestries. The hieraticism of the late Gothic Flemish artists combined gracefully with the agility of the Renaissance in Willem de Pannemaker's luxurious tapestries and Van Orley's cartoons. Less affluent customers would make do with small tapestries for private devotion. Like a picture frame, woven borders appeared at the turn of the century, framing fashionable subjects like hunts, mythology and history.

In 1551, in France, Henri II reorganized and reinvigorated the Parisian workshops, which grew in number. This led to the rise of real dynasties of tapestry-makers like the Brocart, Blasse and Laurens families, who produced all kinds of pieces. Three lengths were regularly mentioned: 4.80, 3.60 and under 2 meters (15.7, 9.8 and under 6.5 feet). While these craftsmen may not have attracted prestigious commissions, they were frequently entrusted with chancellery tapestries featuring fleur-de-lys: hangings embodying the royal presence in institutions of power.

In 1601, Henri IV set up Flemish tapestry-makers in Paris and prohibited the entry of foreign tapestries into France. This was a cunning move that brought two benefits: tough competition disappeared and weavers now well-versed in classicism could train French craftsmen. In this new 17th century, the art of tapestry developed a solid foundation that lasted until the 19th century.

The collections of the Cité Internationale de la Tapisserie, in Aubusson; the set of "Verdure" tapestries at the Château de la Trémolière, in Anglards-de-Salers; the "Apocalypse" hangings in the Château d'Angers, and "Maximilian's Hunts", designed by Bernard Van Orley, in the Musée du Louvre.