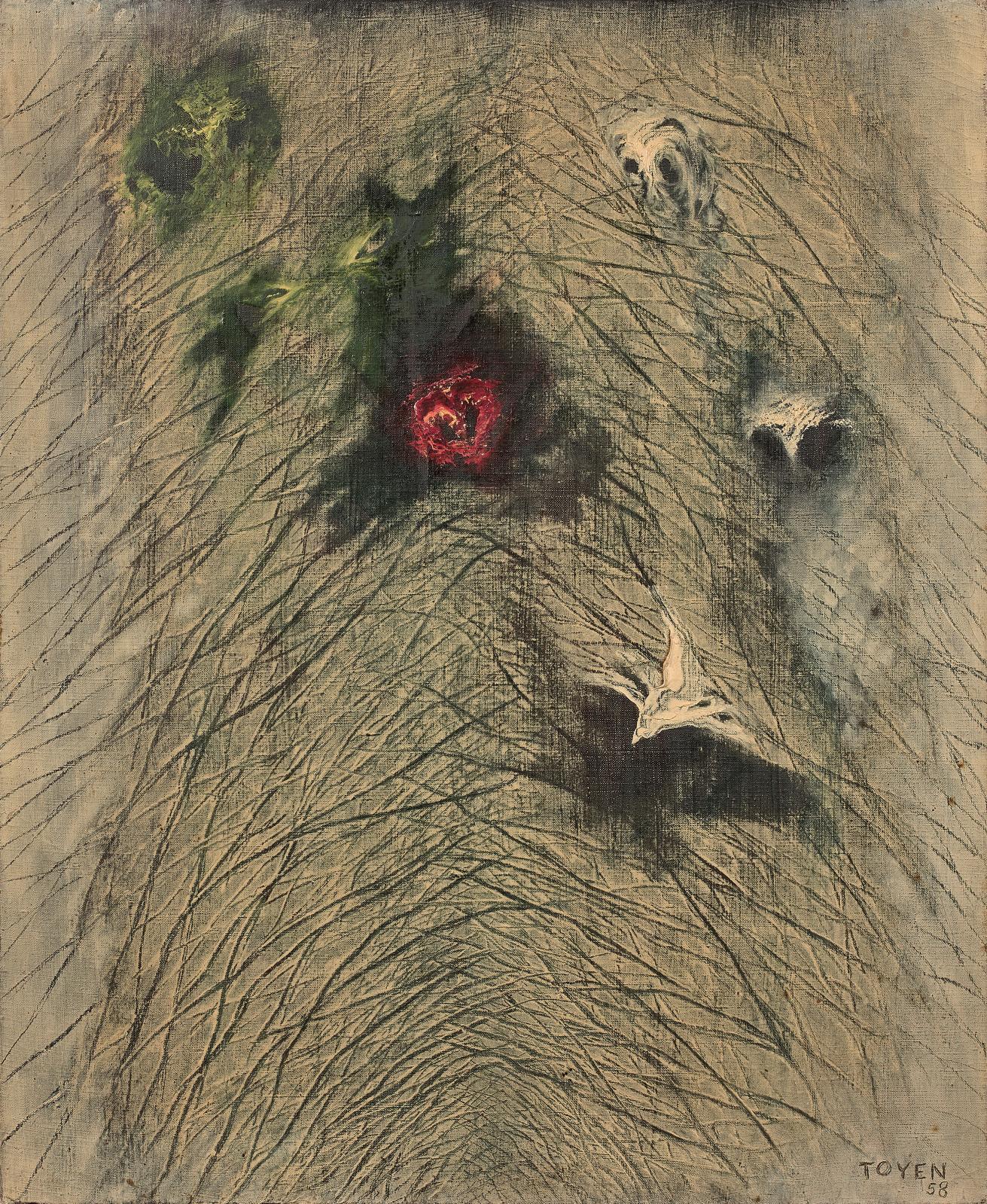 The Surrealist galaxy, with all its successive dubbings and excommunications, gradually formed a large constellation of painters, photographers, poets and film directors. Jehan Mayoux and Gérard Legrand were part of the shifting coterie. The two hundred pieces in question here come from these two names, and above all from their respective wives, Marie-Louise and Clarisse. Their descendants have now jointly decided to sell all these works in the same sale. Far from being carefully thought-out acquisitions, these works (mostly making their first appearance at auction) were gifts from artists who became genuine friends, and an intimate part of this poetic and human adventure.

Tanguy, Miro and Bellmer
Two outstanding pieces come from the Mayoux. The husband, Jehan (1904-1975), teacher and poet, eventually sent a text to André Breton one fine morning in February 1933. The great prophet hastened to publish it in the fifth issue of "Surréalisme au service de la révolution", and immediately admitted its author to the circle of the favoured few – where the newcomer met Yves Tanguy. They became devoted friends, collaborating on joint projects and a poetry anthology with the colourful title "Ma tête à couper", published in 1939. Tanguy gave Marie-Louise Mayoux a dedicated oil on panel, "La Couche sensible", dated 1933, which flaunts a magnificent palette of greys and pinks. This scene will be the linchpin of the sale, with an estimate of €120,000/180,000. The work has a fine track record: it appeared at the Centre Pompidou's major retrospective in 1982, and the following year at the Solomon R. Guggenheim Museum in New York. It will be accompanied by a "Composition surréaliste", a 1936 ink drawing on paper expected to make €10,000-15,000. Another woman features as a muse in this sale: Clarisse Legrand. She was the first wife of Gérard Legrand (1927-1999), also a key figure in Surrealism, who joined the movement when he was 21. A poet, essayist and film critic, he collaborated zealously with Breton. His companion, Clarisse, was very close to Surrealist women artists, particularly Toyen, who gave her "La Gelée blanche", a 1958 oil on canvas typical of her most abstract vein (€40,000/60,000). Meanwhile, other pieces are dedicated to Benjamin Péret, a Surrealist legend. The first, a watercolour by Joan Miro (€20,000/25,000), evokes the artist's close ties with the Parisian group. The second autograph is a very rare first edition of "Die Puppe", Hans Bellmer's first scandalous book, published in an edition of only a few dozen at the author's expense (€12,000 and €18,000).

Exquisite Corpses
With Clarisse Legrand, the visual arts are not the only ones involved. We find a number of manuscripts and printed documents of great significance, including "cadavres exquis" from different periods by different artists: ten in-4° and five in-8° pages, which you can leaf through for €2,000-3,000. But there is also an original period photograph, printed on a postcard, of André Breton, Paul Éluard, Tristan Tzara and Benjamin Péret. Signed, unusually, by the four Surrealists, it has an estimate of between €1,000 and €1,500. And Péret also features with several texts in his hand, as well as dedicated books. The most appealing piece of evidence is an original signed drawing by Roberto Matta (€1,200/1,500), limned on the page forming the catalogue for the artist's 1940 exhibition at the Julien Levy Gallery in New York. This original erotic figure carries a dedication to Benjamin Péret – described as "cher vieux" ("my dear chap"), while at the bottom of the page, Matta greets "Remedios Varo", the writer's wife at the time.

Heiner Pietzsch, the Collector Who Gave Berlin Surrealist Art
Newsfeed
See all news
Soissons' Cathedral of Saint-Gervais-et-Saint-Protais Gets Its Rose Window Back by the End of the Year
Ancient Egyptian Road, Buried for Centuries, Uncovered in Lavish Ceremony
The Mystery Behind This Chinese Painting, About to Go Under the Hammer
Finalists of MAXXI Bulgari Prize Announced
Not to be missed
Spotlight
An Invitation to the Ball with Magnificent Evening…
A wardrobe in exceptional condition takes us back to the splendors…
Spotlight
Eugène Gaillard, Samuel Bing and Émile Gérard:…
The destiny of three men converged on this iconic piece of Art Nouveau…
Spotlight
First Appearance at Auction of a "Saint Peter"…
A splendid find—a Ribera in fine condition, signed, dated and with…
Spotlight
The Romantic Treasures of the Pierre Collin L…
Some 300 books form the collection of Romantic illustrated books…