Their lives were bold and eventful, their travels extraordinary, their sexuality daring. Many of them wholeheartedly embraced the movement. La Gazette profiles three of these often-unsung women artists. 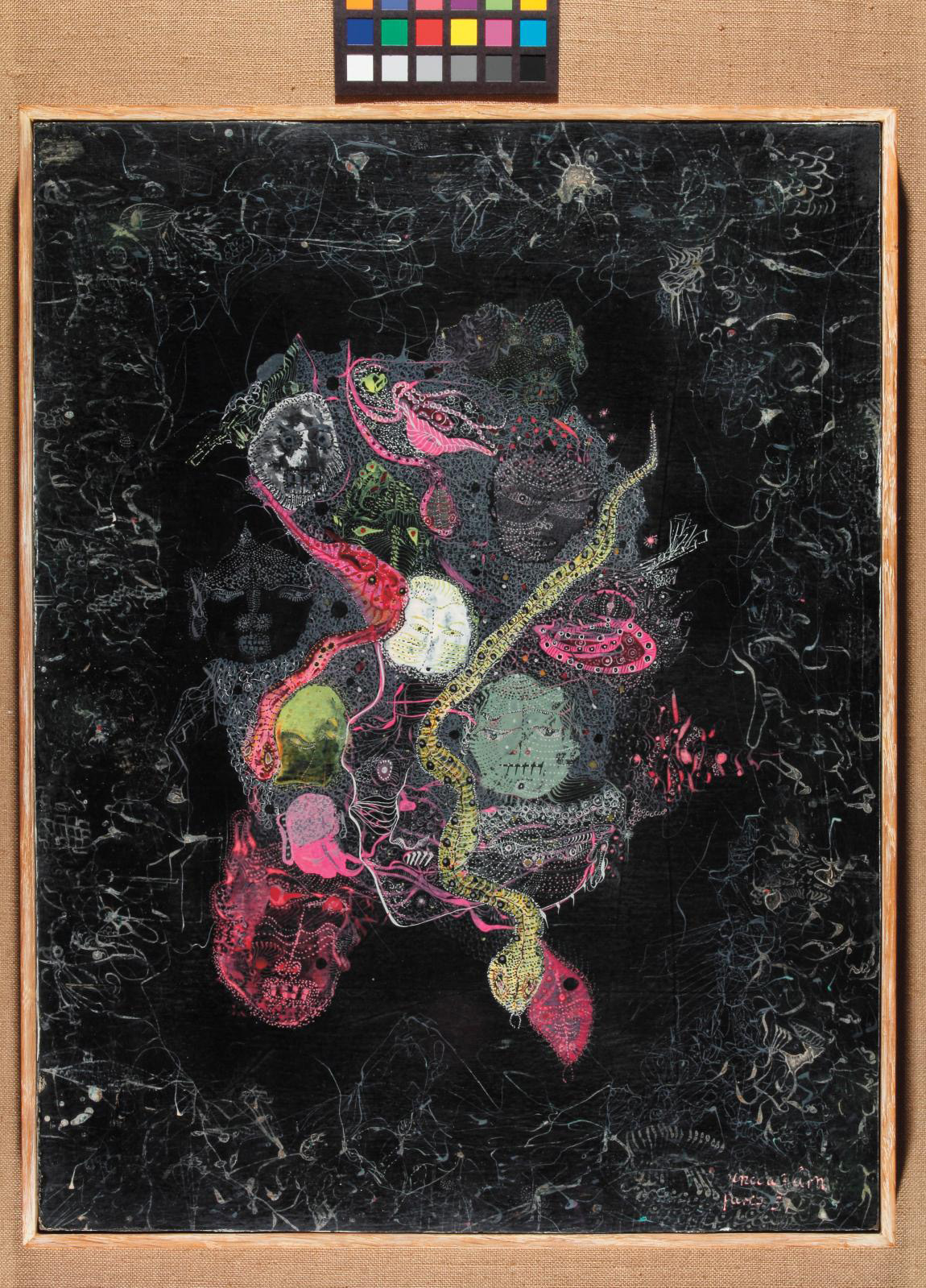 Surrealism is often reduced to a caricature of quarrels, theories and sex. Portrayed as doctrinaire and misogynistic, its many avatars have been erased, its subversive nature occluded. Its founders were at first acclaimed for their openness, then condemned for bad behavior. Seen through a feminist lens, the movement’s image became tarnished. But the women who took part in it—photographers, visual artists, poets and novelists—paint a more nuanced picture. Although some of them were married to or lived with its most famous players—Man Ray, Max Ernst, Yves Tanguy and André Breton—they rarely conformed to the feminine ideal espoused by Breton and his circle. They often, but not always, kept their distance from the men, pinpointing their weaknesses without necessarily being hostile. Clearly, Surrealism was less a sectarian movement than a wellspring of creativity.

These women developed their own artistic sensibility. They showed images of their bodies and of their existence as artists. Their multifaceted lives were bold and eventful, their travels extraordinary, their sexuality daring. Elsa von Freytag-Loringhoven (1874-1927), a German-born Dadaist who emigrated to New York in the 1910s, is a case in point. She wore "outrageous" outfits and engaged in behavior deemed scandalous by the standards of the time. Her androgynous appearance was a harbinger of punk and queer culture. Freytag-Loringhoven put a common, everyday urinal in Marcel Duchamp's way, thereby precipitating the inception of modern art’s most shocking work. Even if the story is somewhat unclear, it is revelatory: it is not about macho plagiarism, but rather a generous, artistic and liberating gift. Although the Surrealists did not forget Freytag-Loringhoven’s message, they did not share her vehement activism.

After women joined the movement in the 1930s, journals and international exhibitions gradually began featuring their work. Today, interest in them is rising: the number of monographs and shows devoted to these artists is growing. Oddly, an early 2020 exhibition in Lalín, Galicia focusing on Spanish artist Maruja Mallo (1902-1995) included several counterfeit works. An exhibition focusing on the work of Argentine-born British artist Eileen Agar (1899-1991) is set to open at London’s Whitechapel Gallery in May 2021.

In the late 1920s, the close ties between the Surrealists and French artist Valentine Hugo (1887-1968), who practiced drawing and illustration, reflected a desire to promote the “minor” arts. Her collection of rare manuscripts—a bridge between Romantic and Symbolist culture—is an eye-opener. Hugo’s constellations and phantasmagorical world echoed the Surrealists’ cult of dreams and nocturnal premonitions and pulled the movement towards a fabulous, pre-modern world of fairy tales. Her interest in the effects of light led her to develop an early form of graphic solarization whose radiance recalls illuminated manuscripts and Mannerist night scenes. She left Victor Hugo’s great-grandson for Paul Éluard, and fell in love with Breton, but the feeling was not mutual. Valentine Hugo’s companions celebrated her in their poems and she reciprocated in her drawings, publicly circulating an unprecedented series of loving, artistic messages.

Blurring boundaries
While Hugo drew on Surrealism’s past sources of inspiration, Claude Cahun (1894-1954) developed a groundbreaking style that lit a fire around gender issues and systematically, subtly blurred the boundaries between male and female with disconcerting frankness. She staged photographs of herself in men’s clothing and, navigating between artistic genres as well, used photography in unparalleled, innovative, conceptual ways. Cahun was an avant-garde actress, performance artist, writer, journalist, essayist and translator who was close to Henri Michaux and Robert Desnos and forged links with Breton in the early 1930s.

With a clearly established identity, she was undoubtedly carried away by the artistic radicalism of her choices and became involved in various Surrealist groups. During the Second World War, Cahun and her partner Suzanne Malherbe (1992-1972), alias Marcel Moore, moved to Jersey, where she became involved in Resistance activities. Aware that the Gestapo was after her, she destroyed much of her work before being arrested. In 2011 a monographic show at the Jeu de Paume in Paris brought her photography back into the spotlight: her stark gaze transfixes the viewer, and her razor-sharp sexuality awakens muted emotions not easily forgotten.

The Price of Life in the Shadows
Visionary artist Dora Maar (1907-1997) came to Surrealism by way of photography. In the mid-1930s, she breathed life into mundane but hard-to-identify objects and shapes to make them look unsettling or imbue them with an animalistic eroticism. Maar’s objectified nudes, and bodies in general, seem as though sucked into a blind vortex. Her hypnotizing, unforgettable photographs have often been attributed to Man Ray, with whom she worked. She was already a well-known advertising and fashion photographer by the time she gravitated into the surrealists’ orbit. After becoming Picasso’s mistress, Maar was drawn into a life from which she never recovered after their breakup. She became depressed and lived in seclusion in the South of France, where, cut off from the world, she focused entirely on painting. Her photographic work was not recognized until later.

Like Dora Maar with Picasso, painter Jacqueline Lamba (1910-1993) lived in Breton's shadow. After their marriage in 1934, she found herself at the heart of the surrealist movement. She exhibited her work and traveled often with Breton, but when she left him at the beginning of their exile in New York in 1941, she was glad to regain her artistic freedom. From then on, her softly lit paintings probed the mysteries of a world halfway between Earth and the cosmos, plants and animals. With poetic fragility, she revealed the experience of an initiatory journey through space.

Surrealism exerted a powerful international influence right through to the 1960s, and was much affected by the upheavals of the war. European women artists, including those who sought refuge in the United States, continued to play a key role in its history.

Harnessing the Magical Powers of Leonora Carrington
Newsfeed
See all news
Refik Anadol Now Represented by König Galerie
Steady Sales Reported at Art Basel
Nigerian Artists Offer Donated Works to British Museum in Return for Benin Bronzes
$30M Frida Kahlo Self-Portrait Set to Break Records
Not to be missed
Analyses
Collecting Art: Morozov and the Russian Art Connoiss…
On display at the Louis Vuitton Foundation in Paris this fall, the Morozov…
Analyses
Great British Painter: Dame Laura Knight
From arguing for women to be included in life drawing sessions at…
Analyses
Recreating Cosquer Cave: An Underwater Archaeological…
Part of the paintings designed to adorn a replica of the Cosquer…
Analyses
In the Crosshairs: Luma Arles Cultural Center
There is nothing quite like the Arles cultural center, an offshoot…