Soutine, a Tree Before the Storm

Trees, a full-fledged theme in Soutine’s work, lend themselves to a veritable demonstration of painting. Trees in the Wind, also called Before the Storm, is a personal interpretation of this landscape classic. 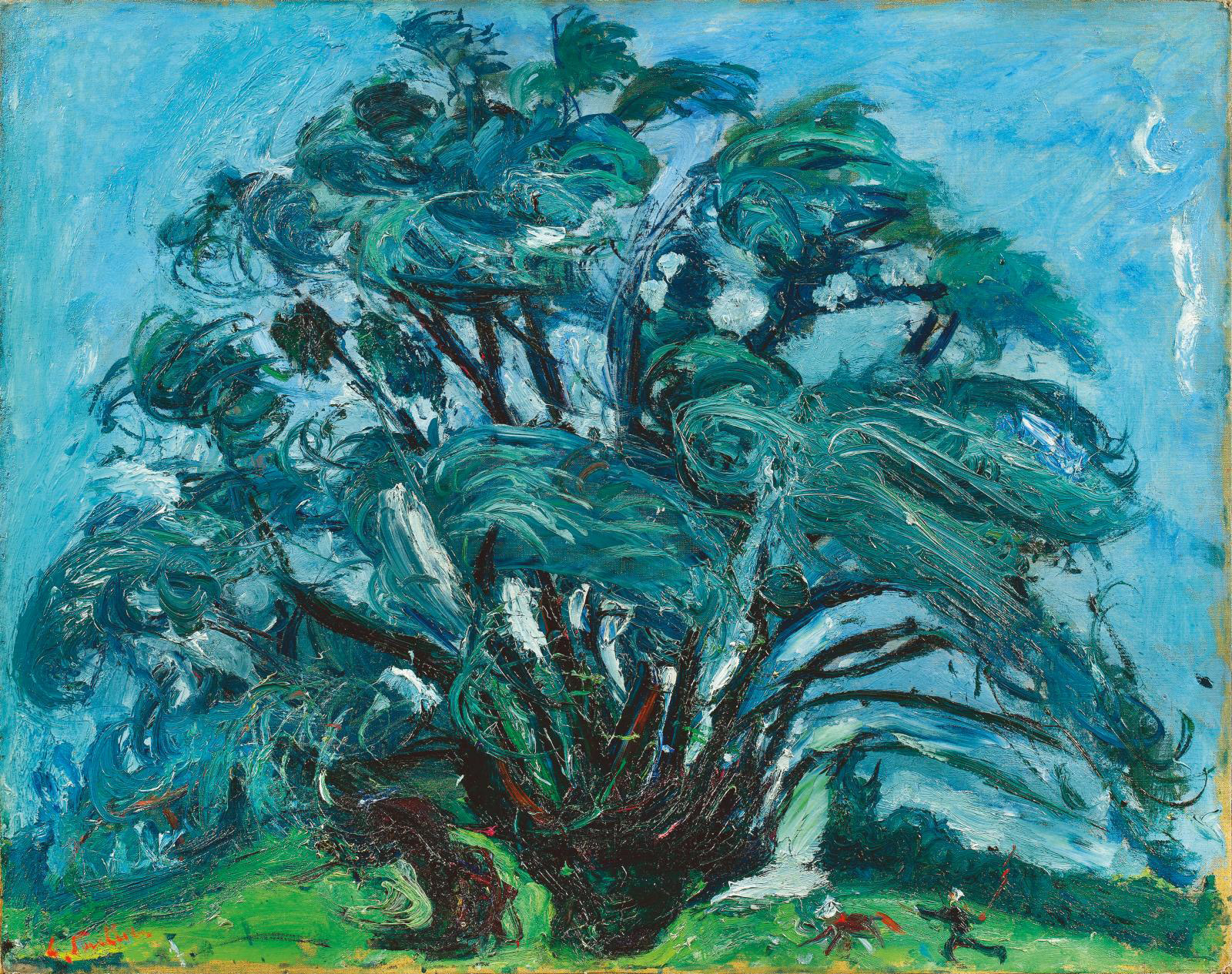 The hand-shaped base of the tree, wind-blown branches creating a sense of powerful movement, swirling paint and colors translate a landscape as much as a state of mind before the storm. Trees in the Wind, painted in about 1939, is the tormented vision of a Jewish immigrant painter living in France as the war began. Without over-psychologizing, it can be agreed that there is anguish in the twisting trees and the jumbled composition. Trees in the Wind is not an isolated subject. Several other works allow evolutions to be observed. As Soutine and his companion Gerda Groth found themselves trapped by the geopolitical context in Civry, in the Yonne near Auxerre, he painted landscapes where village streets, a church and several places can be made out. The Tree, also painted in 1939 and sold in New York in 2011, has a farmer and some cows in the corners of the canvas. This work, in which the tree looks anthropomorphic, was bought by Alfred Hitchcock, undoubtedly for its dramatic appearance.

Trees in the Wind has a well-established provenance. Noted in the catalogue raisonné by Tuchman, Dunow and Perls as Landscape no. 171, it was in the collection of Marcellin and Madeleine Castaing, Soutine’s patrons and collectors. Last seen at the 2013 Orangerie exhibition “Chaïm Soutine, the order of chaos”, the work is clearly different from the earliest landscapes that the artist painted in the early 1920s in Céret, the land of the Cubists where Soutine interwove landscapes, played with perceptions, abolished depth and lengthened sycamore trees and houses in the distance. Distinctive elements merge in a distorted composition and the brushstrokes create the impression of movement. Legend has it that a drunk Modigliani said, ”Everything is whirling around me like a Soutine landscape”, but that is impossible because the Italian painter died at the very moment when Soutine was developing his landscape work. However, the anecdote sheds light on this as a process of personal exploration, an expressionist practice perhaps linked to mourning.

Several authors have suggested that Soutine’s trees come from a Lithuanian family tradition that celebrated forests as embodying the life cycle. In any case, his trees are imbued with vitality and charisma in his brisk brushstrokes, which makes an impression on the viewer. Marcellin Castaing, who signed the preface of one catalog, wrote: “The artist sees and makes us see. Captivating the spirit and isolating it vis-a-vis a set of forms and colors seems like madness and this is his audacity. He speaks to our sense of mystery. The struggle is private, the forces are concentrated. The subject is present. The enigma slips away.” Soutine was able to focus on certain trees, especially at Vence, or on an atmosphere, such as when he painted the grounds of the Castaings’ property in Lèves. But Trees in the Wind, which depicts a person accompanied by a dog, attests to another invisible concern, an inner need.